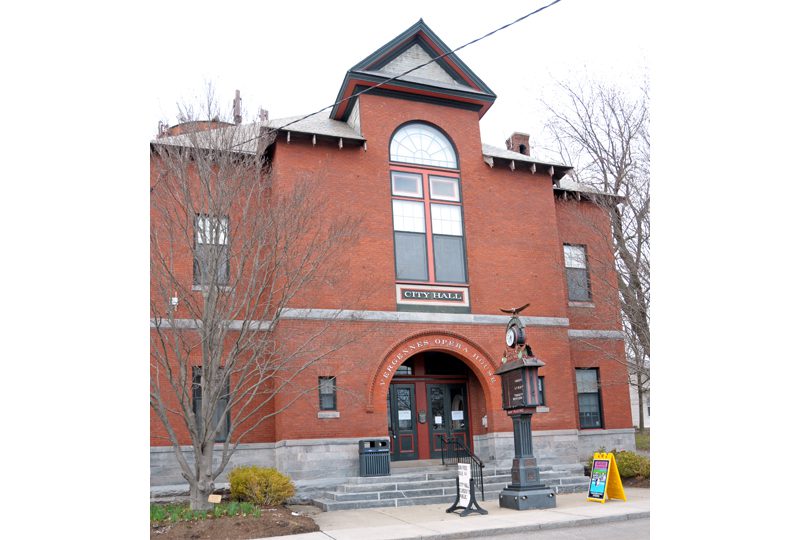 The meeting I saw had all the grace and charm of a back-alley knife fight.
— Shannon Haggett

VERGENNES — Many residents, including current and former Vergennes officials, remain upset after the July 16 city council meeting that ultimately led to the resignation of Mayor Jeffrey Fritz and Councilors Bill Benton, Tara Brooks and Mark Koenig.
Some citizens wondered at the meeting if a planned coup had just occurred at a gathering warned to discuss a council member’s allegation that city police had made some citizens feel intimidated and demoralized.
At least three residents, Sarah Stroup, Sue Rakowski and Jeremy Holm, filed Freedom of Information Act requests for documents seeking pre-meeting communications among City Manager Daniel Hofman, now Mayor Lynn Donnelly, Councilor David Austin, and Police Chief George Merkel.
A petition circulated by city residents Sarah Stroup and Erin Roche criticizing the July 16 meeting, at which the council voted to accept Fritz’s resignation, was signed by 231 residents.
That action came after Hofman unveiled a string of texts in which Fritz made apparent threats to Austin and Donnelly. Fritz has told the Independent his texts were not meant seriously.
Hofman informed Donnelly and Austin about the texts before the July 16 meeting, but not other council members. Nor did he identify Fritz before the meeting to other council members as the source of the allegation about city police. It was at Hofman’s request the July 16 special meeting was called to discuss those issues.
Hofman at the meeting unveiled the texts after Fritz made an opening statement that did not address his allegations. After Hofman unveiled the texts Donnelly read a prepared statement asking Fritz to step down, and Fritz said he would at the council’s pleasure. A vote quickly went against him, 5-1.
The petition, which was also a letter to the city council, alleges the July 16 meeting “showcased unprofessional behavior from our public servants that was surprising and disheartening.”
Stroup and Roche wrote that those who signed the petition agreed that “The City Council must explicitly revisit what happened and why… According to the Mayor’s statement and the City Manager’s texts, the City Manager called the meeting and defined the agenda. He should explain what information he shared with the Aldermen and how he designed the response to the Mayor’s texts.
“The process by which City Council addresses concerns over the July 16 meeting should in no way interfere with the work of the Police Department Citizen Advisory Board Exploratory Committee,” the letter continued. “Personal disagreements and attacks have no place in a City Council meeting.”

OFFICIALS WEIGH IN
Longtime Vergennes Planning Commission Chairman Shannon Haggett also wrote to the council. Haggett first said he did not condone Fritz’s texts, then added, “Please also understand that in no way do I condone the method the City Council used to handle this situation. In my opinion, it was counter to proper public processes and was as divisive as Mr. Fritz’ texts…
“The removal of the former Mayor was not an agenda item nor was the agenda publicly amended to include it. Information used to justify the action and call the vote was not equally disseminated to all Councilors in advance,” Haggett continued. “The issue of the former Mayor’s suitability for office should have been dealt with in a separate meeting, possibly with deliberations held in executive session …The meeting I saw had all the grace and charm of a back-alley knife fight.”
Haggett suggested that “instead of trying to justify what has already occurred, we need to recognize that this community is hurting from this situation and take steps to make things better…
“I strongly urge sitting Council members, as well as any future Council members, and the City Manager to conduct themselves in an appropriate, open and transparent manner, adhering to existing laws and procedures moving forward,” he wrote.
Former Addison Northwest School Board Chairwoman Sue Rakowski also wrote in a letter to the council that she was “very disturbed” by what she saw at the July 16 meeting:
“It is inappropriate that information was shared with some council members and withheld from others prior to the meeting. The meeting did not follow the warned agenda. Deputy Mayor Donnelly’s and Alderman Austin’s statements, as well as some of the information shared by City Manager Hofman were not germane to the warned discussion topic… I feel badly for City Manager Hofman being placed into a difficult situation and for those who felt threatened. But the process followed on July 16 was a procedural mess and an embarrassment to the city.”

RESIDENTS SPEAK OUT
Holm hopes the current environment won’t distract from the study of a potential police advisory board and the larger contemplation of racism that has led to a string of rallies on the central green.
Holm said he did not condone Fritz’s texts, but pointed to the apology offered and accepted within them.
“Daniel Hofman called the meeting to discuss a report of a threat of intimidation by the police department,” Holm said. “He then put up text messages between himself and the mayor where they gave what they perceived as a threat. No one filed a police report about being threatened. And, in fact, in that text a string an apology was given and accepted. So there are just so many things about it I don’t understand.”
Resident Nial Rele, who referred to the meeting as a “neatly coordinated coup” in an email to the Independent, also sent an email to Hofman and the three remaining council members on Tuesday.
Rele said “more than a dozen people” have complained to him that they have found Hofman to be “patronizing, acrimonious and/or defensive” when they try to discuss recent issues.
In referring to the July 16 meeting, Rele wrote, “you tried to pull a stunt and it has since backfired. It is plain to any reasonable person that the former Mayor never threatened you in those texts. You are not the victim here. Lynn Donnelly and David Austin may fairly say so, but you cannot.”
Rele concluded:
“The community’s trust in our current city leadership has eroded beyond repair… If we want to see Vergennes back on track, I do not see a fair or reasonable path forward where you continue to serve in your position. I believe that you should resign.”

HOFMAN RESPONDS
Donnelly did not return several phone calls between Monday and Wednesday morning for this report.
The Independent had hoped to ask the mayor about the statement she planned to read at the July 28 meeting; the nature of communications between her and Hofman on July 15 and 16 before the July 16 meeting, including 16 phone calls, mostly brief, on the call log that Stroup obtained through her FOIA request; and Donnelly’s vision for bringing unity and direction back to the city and its government.
Hofman fielded those questions.
On the 16 phone calls between him and Donnelly, Hofman said that he “talk(s) to the deputy mayor a lot about a lot of things. Yes, I told her she was being threatened. That’s a couple phone calls because there’s a couple of different threats there. I talked to her that evening when the GIFs (part of Fritz’s text chain) were flying. I might have talked to her a couple times then. I’m sure the phone records would show that.”
He said on that Thursday he did not discuss anything about the meeting with Donnelly other than agenda planning: “I talked to her about setting up the meeting. I talked to Jeff Fritz as well for a period of time about the meeting.”
Why did he call for the meeting?
“It’s a very complex issue that happened in a short period of time that put the city in a lot of exposure. If something happened to Lynn, if something happened to Dave, if someone was being intimidated or demoralized and they killed themselves, those things put the city (at risk). First, it puts me in a liable spot. Then I have an obligation to do something.”
Why not tell all the council members about the texts and the source of the complaint? Hofman said Fritz should have been the one to explain the nature of the alleged police intimidation during his opening statement, and that it was Hofman’s job to contact those allegedly threatened by the texts.
“First, they weren’t the ones being threatened. No. 2, if there’s a problem with the mayor, technically it should go to the deputy mayor, who is Lynn Donnelly, who I told there were threats being thrown around,” Hofman said.
“I expected the mayor would explain himself … He did not explain himself. And in the opening statement he did not explain himself. He had the entire room to address it. He had the entire time to address it. And he didn’t address it. It was a false accusation. He knew what the meeting was for. I literally told him over the phone multiple times this has to be addressed at the meeting.”
Did he tell Fritz he would reveal the texts?
“I talked to the mayor specifically that day multiple times that he needed to address this. I told him that. There should be no ambiguity to me telling the mayor you need to address these accusations. And he didn’t address them.”
Did Fritz know Hofman would reveal the entire text string?
“No, but I had an obligation to once he didn’t explain it.”
Would Hoffman have revealed the texts if Fritz had acknowledged and explained and/or apologized for them?
“He didn’t, so I can’t speak to a hypothetical. I don’t know how many times I need to tell him this needs to be addressed before this goes up on the screen. What else can I do?”
Was it appropriate to share the texts with the council?
“I don’t want the city liable or getting hurt. And direct and false accusations against the police certainly could result in someone killing themselves if they’re demoralized, or Dave Austin or Lynn Donnelly getting hurt. And I have a legal obligation to do something, or that’s on me.”
Fritz remains unhappy the texts came to light.
“The context of the texts were incredibly general. I said people were feeling intimidated. That is exactly what I said. Which is not a specific accusation, which is also what I said in my opening. I said there are no accusations here. I was pretty explicit about that. So I was absolutely broadsided by everything that occurred after my statement,” Fritz said.
He believes Hofman should have known the alleged threats were not serious.
“We have had a stream of banter for seven months. So I had no reason to think this wasn’t sort of just the same thing,” he said.
Fritz was asked if he thought the contents should have remained private even if some of the content was inappropriate.
“I certainly would have thought so. I thought we were developing a working relationship, and that we were on the cusp of doing great things together, all of us. And so I was very disappointed,” he said.
Ultimately, Stroup said she was heartened by the strong citizen response to the situation because it showed people cared about the community.
But she said hard work lies ahead.
“There are so many wonderful people speaking out together,” Stroup said. “Having said that, the challenges we face are substantial, and we need a functional, competent, and respectful government to meet those challenges.”
SEE RELATED STORIES