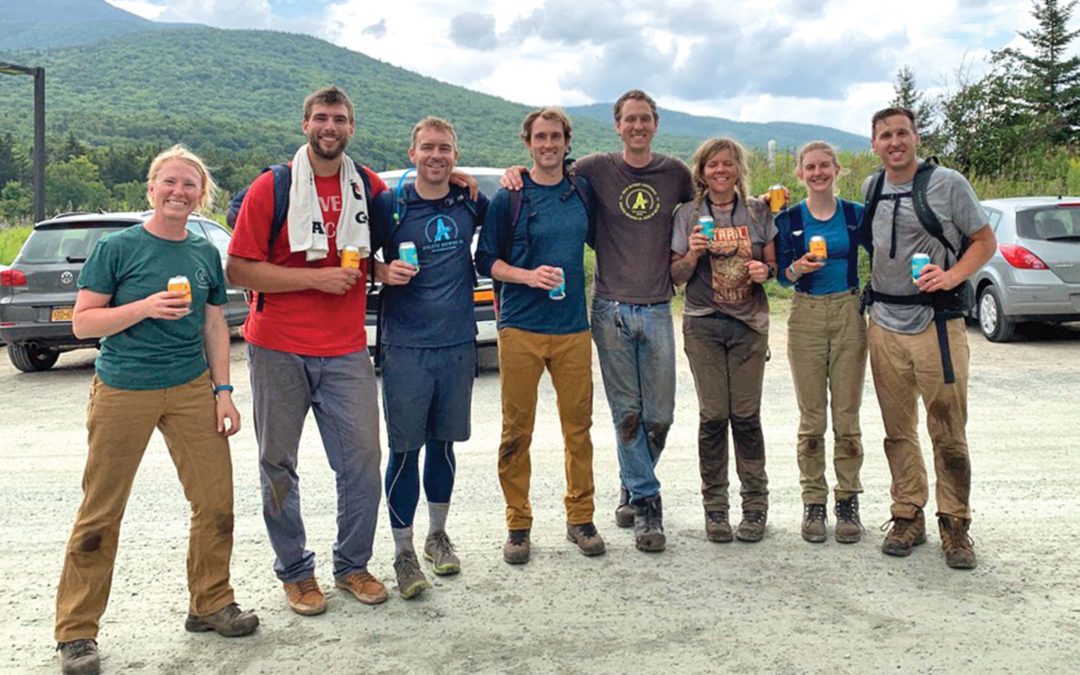 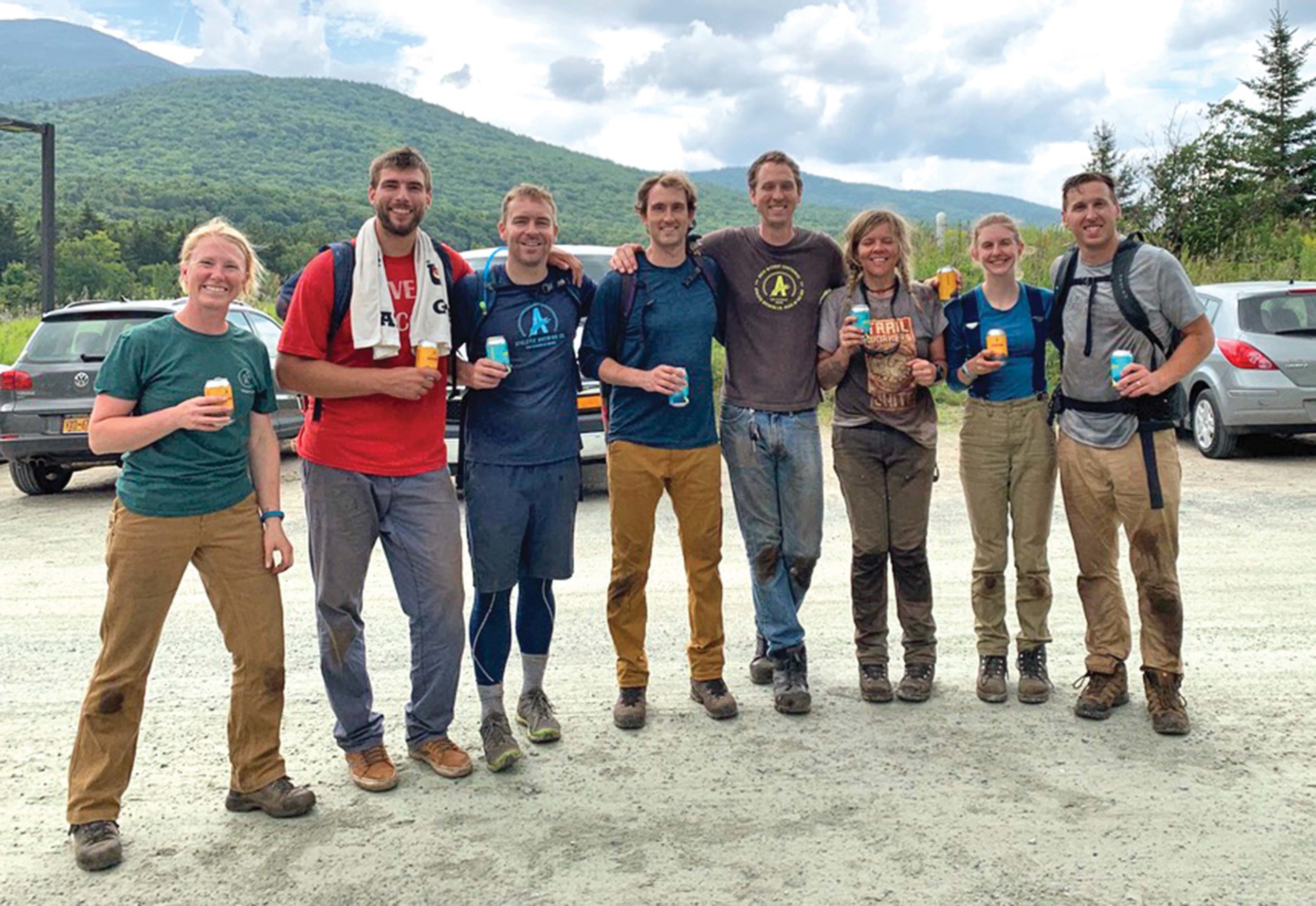 EMPLOYEES FROM ATHLETIC Brewing Co. regularly improve outdoor recreation areas as part of their corporate mission. Recently the company, founded by a Middlebury College grad, committed to work on the Long Trail in Vermont.
By Rose Evans

At one point, Bill said, ‘I have to go run up a mountain right now,’ so … we share a lot of the same values.
— Mike Debonis, GMC executive director

A big donation to the Green Mountain Club by a company founded by 2005 Middlebury College graduate Bill Shufelt will help the club maintain the historic Long Trail.
Athletic Brewing Company recently joined the list of Green Mountain Club corporate sponsors with a $15,000 donation and a commitment to support maintenance of the trail that stretches 272 miles from the Massachusetts border to the Quebec border. The Long Trail, established in 1910, is the country’s oldest long-distance hiking trail.
The donation will also help shore up the Long Trail Patrol, the crew that maintains damaged and worn sections of the trail, by relieving costs of materials and labor.
Shufelt said the donation is keeping in line with Athletic Brewing Company’s active and health-based mission.
“We only get one chance at this world, and we want to make sure it’s here for generations to come,” said Shufelt, explaining the motivation behind the donation
Athletic, based in Stratford, Conn., brews non-alcoholic beer. The GMC donation is part of a larger company initiative to protect outdoor spaces, known as Two for the Trails.
The program gets its name from a saying Shufelt would use to describe how many items he could carry when trail running without a day pack — two: one in each hand. It denotes the company’s commitment to donate 2% of all sales to trail and park cleanup. This year to date, Athletic Brewing Co. has donated $140,000 through Two for the Trails, including larger corporate partnerships like ones with GMC and the Appalachian Mountain Club, as well as smaller donations to state and municipal parks. Members of the Athletic team often do trail maintenance as part of the donation, returning to volunteer annually.
“It’s about the health of our community and protecting our environment,” said Shufelt, who grew up hiking and skiing in Vermont and attended Middlebury College. According to Shufelt, Two for the Trails has been core to the company’s mission of promoting healthy, social activity since its inception in 2018.
“As I was getting closer to 30, I realized how the food and fuel I was putting into my body really affected my performance and my mindfulness,” said Shufelt. “I realized that drinking was inconsistent with the other areas of my life and saw this opportunity to have a positive impact on the community.”
In fact, almost 15 million American adults suffer from alcohol use disorder. With this in mind, Shufelt founded Athletic Brewing Co. as a way to “make drinking not synonymous with drinking alcohol.”
Shufelt’s emphasis on promoting a healthy lifestyle resonated with Mike Debonis, a Middlebury native who serves as the executive director of the GMC.
“When Athletic reached out to us, it felt like a particularly good fit,” said Debonis. “The foundation of their company and their connection to outdoor resources aligned with the mission of the club.”
Debonis continued to explain a phone call he had with Shufelt when setting up the partnership. “At one point, Bill said, ‘I have to go run up a mountain right now,’ so, it’s part of his background, too, and we share a lot of the same values.”
Debonis was also struck by Athletic’s commitment to trail maintenance. “The volunteerism element is huge for us. There’s so much work and we have limited staff, so being able to count on these service trips from businesses that can go out and do a couple days work with their staff is crucial.”
Trail maintenance often includes building infrastructure such as hardening trail or bridges, installing wood planking or guide rails and ropes, or making steps on the trail.
This work is especially critical given the uptick in trail use that the Long Trail has seen since the beginning of the coronavirus pandemic. According to Debonis, the system saw “unprecedented use” this spring, when numbers are usually at their lowest due to mud season.
“Folks are more connected with their local trails,” Debonis said. “People are healthier; they’re getting out and experiencing the outdoors, and hopefully, that will convert to long-term activity and stewardship.”
However, the increase in use also requires an increased maintenance, which has been difficult to drum up during the pandemic. For example, Athletic staffers have had to postpone their plans to volunteer for the Long Trail Patrol until the fall, due to travel restrictions.
For Shufelt and the rest of the Athletic team this is something to look forward to.
“We’re very excited to work with the GMC. They’re an organization that we’ve had a lot of heart for for a long time, so we’re excited to give back by getting out into the world to have some fun and do some good.”