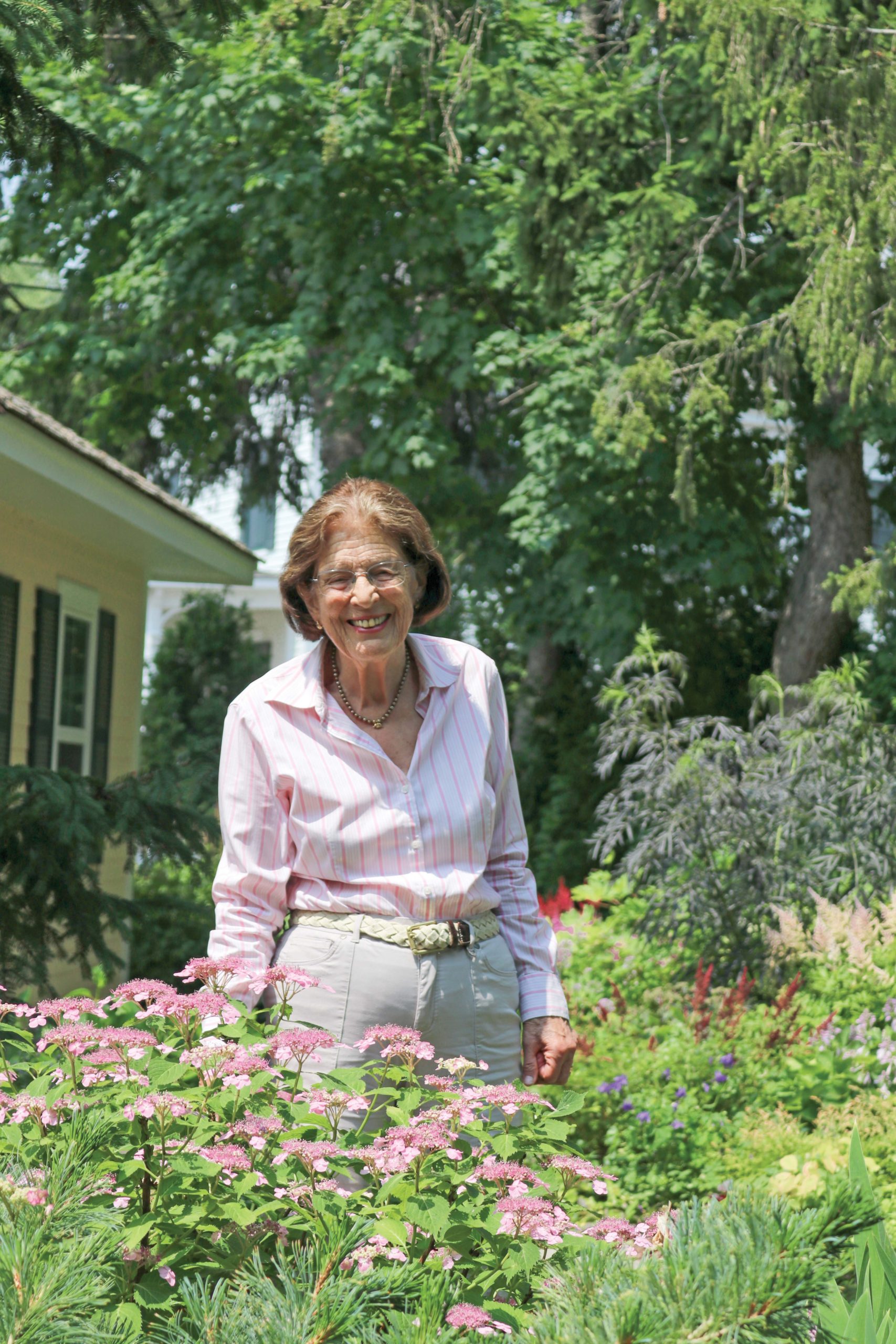 ELISE BLAIR USES gardening around her Middlebury home as a way to stay busy, especially during the quarantine, which is causing many seniors to experience isolation. Blair also hosts zoom classes through Elderly Services, which she finds to be just as rewarding for herself as for her peers.
By Polly Heminway

MIDDLEBURY — The isolation of this pandemic can feel at times unmanageable. That can especially be the case for seniors who cannot leave their homes or visit with loved ones. Elise Blair, a friendly face in the Middlebury community (and beyond) shares some possible ways to escape that isolation.
Elise is a retired psychoanalyst but still a member of the American Psychoanalytic Association. Although retired from daily practice, she still provides support by teaching classes on aging for Elderly Services participants and hosting a caregiving group at the Congregational Church of Middlebury.
The pandemic has moved classes online, but Elise doesn’t mind teaching her courses in that setting and loves the group dynamic that can be brought to people’s homes.
“One participant told me that it (the Zoom class) was the best experience for her to see other faces,” Elise said. “It got her out of her isolation and her whole week was so much better.”
Elise currently is teaching a course through Elderly Services Inc. called “Necessary Losses in Life,” which is structured around Judith Viorst’s book “Necessary Losses.” The class runs every Wednesday for three weeks starting July 15, from 1-2 p.m. Elise plans to host more courses in the future.

BLAIR’S BACKGROUND
Elise’s personal story informs her teaching and helps her build bridges to others.
She was born in Hellmond, a small, industrial town in the southern part of the Netherlands in 1938. After high school, she attended a four-year social work training program in Amsterdam. Those four years — “the best four years of my life,” as Elise put it — would be the beginning of a successful career in psychoanalysis.
She stayed in the Netherlands until she was 30. Then she moved around Europe and eventually settled in Washington, D.C., with her now-departed husband and two (eventually three) daughters.
In D.C., Elise got her first part-time job working as a social worker at a hospital in nearby Arlington, Va. She describes this transition from Dutch culture to American culture in her book, “A Family Affair: the Memoir.”
Even today she remarks on the change she saw in her new home:
“In this country, you were expected to work hard and take care of yourself.” She learned this lesson when she asked an ill coworker why they had not stayed home, their response: “I have no more sick days.”
Elise left the hospital due to her family commitments. Her next adventure would be working for a family clinic in the D.C. area called Preterm, as a patient counselor.
Two years after the opening of the clinic, Elise and some of her colleagues were selected to begin training to support couples with marital problems.
In addition to training for the clinic, Elise was encouraged to pursue courses at the Washington School of Psychiatry, which she did from 1972-1975.
During this time she searched for ways to get her Dutch degree approved as an equivalent to a Master of Social Work degree in the United States. With help, Elise was able to prove the worth of her Dutch degree and have it validated in the U.S. This allowed her to become a licensed clinical social worker.
Between 1977 and 1982 Elise found herself running between her job at the family clinic, training in psychotherapy, and raising three daughters. In 1981 Elise opened her private practice, which she would maintain for 30 years.
Those five years stand out as crucial building blocks in her training and career in psychotherapy, she said.
Elise went on to work extensively at the Washington Center for Psychoanalysis as a teacher and board member, eventually becoming its president.
Elise and her husband Jim Blair moved from D.C. to live full-time at their home in Middlebury in 2015. Elise enjoys swimming and tennis to stay active. For the brain she is learning a new language and taking flute lessons. She is an avid gardener — a hobby that she finds to be wonderfully meditative, and not to mention rewarding when everything is in bloom.
“I always have flowers in the house, flowers are important to me as music is to my husband” said Elise.
Both Elise and Jim use Zoom to connect with friends and family; Jim (who for more than three decades was a photographer with National Geographic) meets with friends to discuss photography, and Elise enjoys hosting Zoom dinner parties.
“This Saturday we will be having our 10th Zoom dinner with friends!” Elise noted.
“That (Zoom) is also the way I communicate with my daughters,” she added. She encourages seniors to use tools like Zoom to make contact with loved ones to break the isolation barrier.
For children, seniors and everyone in between it is important to find ways to keep your mind and body active and engaged, she says. Short phone calls to say hey, walks, or tending to the neglected flower beds you’ve always run out of time for, are all sustainable ways to help you through these trying times — it is never too late to form a new routine.