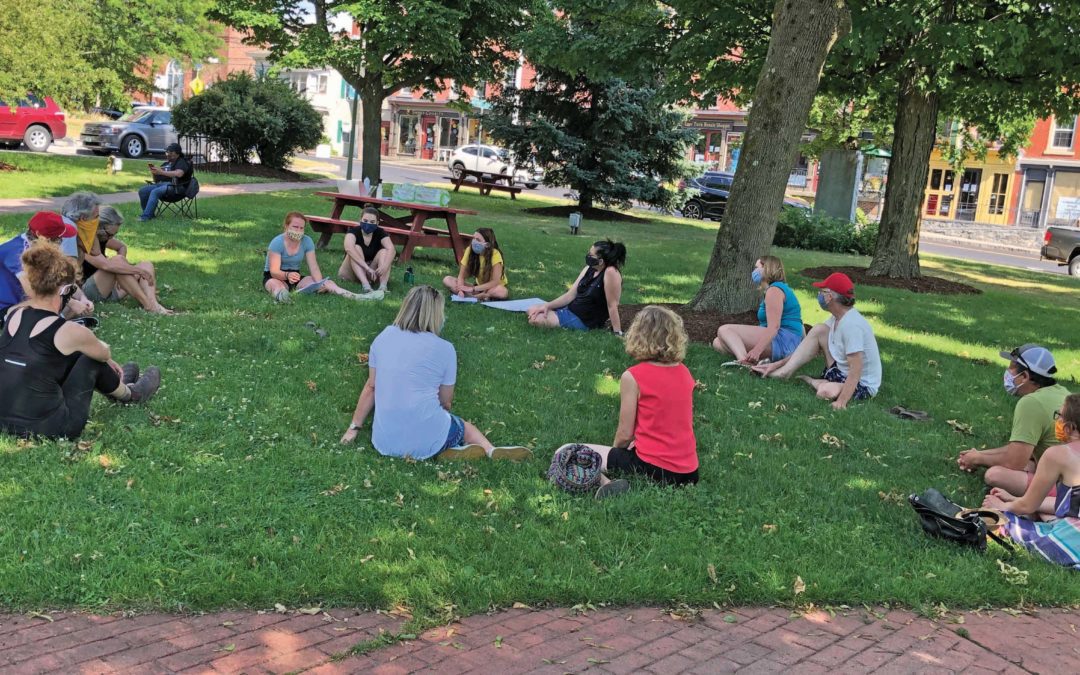 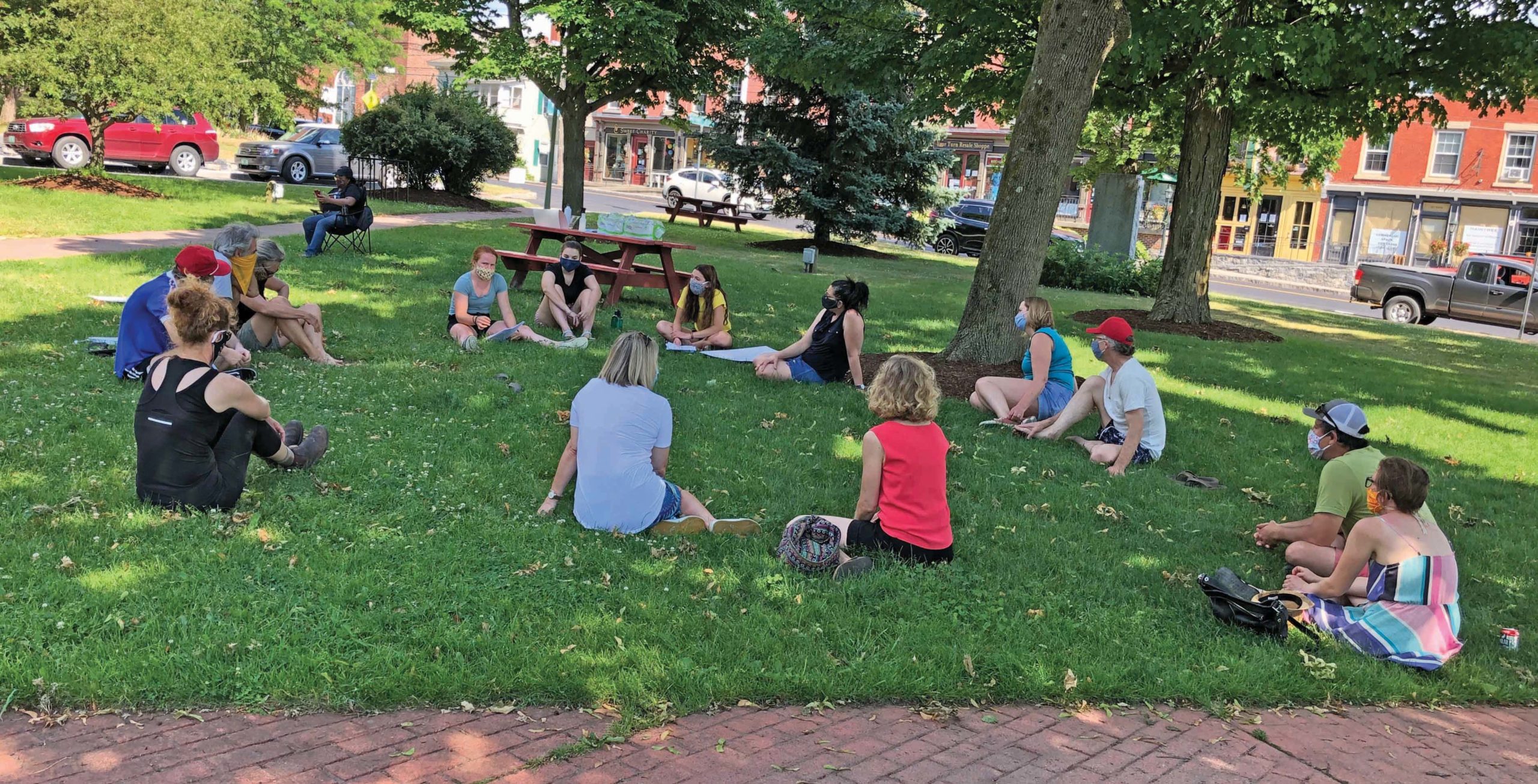 MEMBERS OF ONE of three anti-racism discussion groups on the Vergennes city green on Saturday listen intently as VUHS graduate Rory Patch, back center left, makes a point. Patch is one of the half-dozen members of the school’s Racial and Social Justice Alliance who organized the event.
By Andy Kirkaldy

VERGENNES — For the third straight Saturday afternoon organizers staged an anti-racism event on the Vergennes city green: This time members of the Vergennes Union High School Racial and Social Justice Alliance sought to spark conversation and education among attendees through discussion on June 20.
“We are here today to do some anti-racist work,” said student organizer Rory Patch in the group’s opening statement.
The almost 50 local residents who showed up — including student organizers Una Fonte, Sophie Hatch, David Nicholls, Ryley Olsen and Emily Rooney, as well as Patch — broke into three student-led discussion groups that had titles, such as “Defunding the Police.”
But the larger point, organizers said, was to let the conversations grow organically.
“It was a good opportunity for people to come together and talk about this, and it’s something that isn’t talked about enough. And it’s also something for people to open up and talk about in a safe way,” Olsen said.
Her group, for example, dealt respectfully with members describing how they came to understand that all lives don’t matter until Black lives matter.
“It went very well. Everyone was super open, and it was very good to have a respectful conversation like that where everyone’s ideas were heard,” Olsen said. “They were honest and told about times when they themselves realized things, like what the All Lives Matter group was trying to say and how it was in contradiction to Black Lives Matter.”
During the introduction, in which group members took turns in a prepared statement describing their motivations and goals for the event, Fonte referred to powerful speeches given the week before on the green by Black Vergennes residents Alicia Grangent and Rose Archer.
“It is important that we address the fact that we are white; we do not experience racism, we are not experts on racism, and we ourselves are still learning. Alicia and Rose spoke last weekend, and we are extraordinarily grateful to both of them for volunteering their time and energy. It is their voices, and the voices of Black people that must be centered in discussions of race,” Fonte said.
At the same time, she said, it is not fair for white people to expect Black people to do the hard work of solving the problem: Whites must learn and become active allies.
“We are here today to educate ourselves on these issues by talking together and expanding our knowledge. We, as white people, are not the leaders in this movement, but we do have a responsibility to educate ourselves and amplify the voices of Black people. It’s not the job of Black people to always use their emotional energy to educate us as white people about race,” Fonte said.
Olsen continued from the statement that the Racial and Social Justice Alliance meant white people had work to do, starting with thinking and learning, the goal on Saturday, and then acting.
“This means working against systems of oppression whether they are within our school, within our police department, within our families, or even within ourselves. Everyone here today is in a different place in their work towards anti-racism. And that’s OK,” Olsen said.
“The important thing is that you are doing this work. Even more important is that we all continue being anti-racist, especially when it is hard, when it is unpopular, when it actively makes us, as white people, uncomfortable. If we continue to be anti-racist and call for change, someday we may live in a system that promotes equality, justice, tolerance and empathy.”
The three groups then formed, with prompts from the organizers to start discussions that covered systemic racism in education and policing; white privilege; political and individual action; and individual feelings, insights and questions.
“It was a really good, fluid conversation, so we covered a lot of aspects,” Olsen said, later summing up, “It was everyone learning together.”
She also explained what Racial and Social Justice Alliance wanted to accomplish with the Saturday event.
“We hope that these people will continue to educate themselves and advocate in society,” Olsen said. “We hope that they’ll find a way to continue this conversation. We just don’t want it to stop here. We want it to go beyond this.”