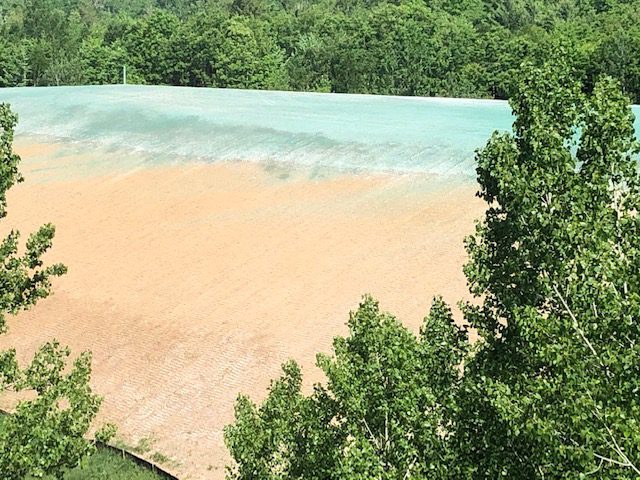 SALISBURY’S OLD TOWN dump recently was capped with calcium carbonate tailings, compost and a mix of conservation plants. One selectboard member said it looks “like a big white half-moon.”
By Polly Heminway

SALISBURY — The town landfill in Salisbury has finally been capped, marking the end of unlined landfills in Vermont.
To protect the environment, Vermonters over the past few decades have been closing their old-fashioned town dumps and sending their trash to lined landfills. After Bristol closed its town dump in 2015, Salisbury’s was the only one left.
After two or three years of lobbying to follow suit, Salisbury residents voted to close and cap their town landfill at town meeting last year.
The “town dump” on Upper Plains Road stopped taking trash this past Sept. 1 and town officials set up a mini transfer station there. Residents are able to bring their trash and recyclables there for transport to the Addison County Solid Waste Management facility in Middlebury.
“Everybody loved that dump. It was a social gathering place,” said Pedie O’Brien, a member of the Salisbury selectboard. “Everyone saw their neighbors and friends — it was not an easy task to get people to understand why we wanted it closed.”
Since last September Casella Construction has been covering and closing the old dump; it completed the job June 5. The company used the refuse of Omya’s calcium carbonate mining and processing along with a mixture of compost from Green Mountain Compost to cap the big hill of waste, and topped it by hydroseeding it with a conservation seed mix.
“Casella did a wonderful job closing it,” O’Brien said. “We were over there that day and when you looked at it from where we were standing it looked like a big white half-moon.”
Selectboard Chair Paul Vaczy shared the selectboard’s appreciation for the work done by Jeff Chase and Charles Wadleigh, along with everyone else from Casella Construction. “They jumped right in and did a beautiful job,” Vaczy said.
R&L Rubbish manages the transfer station at the landfill. O’Brien noted that things such as metal, electronics, compost and light brush can still be dropped off at the transfer station.
“We tried to keep as much as we could from when it was a landfill,” she said.
The Salisbury transfer station also has the shed where one could drop off or pick up used items.
“We have updated our policy and ask that people pay $1 for whatever you bring in,” O’Brien said. “This is because the shed will eventually be sorted through and (old or unwanted items will be) brought to Middlebury, which will cost money.”

30 YEARS MONITORING
Vermont Agency of Natural Resources regulations require the town to monitor the landfill for 30 years.
“This doesn’t mean we can’t do something before the time is up, but we do have to monitor it for 30 years, which is something that was built into the closing budget,” O’Brien said.
Vaczy said that, moving forward, any money left over in the landfill capping budget will remain in the landfill closure account until the 30 years of monitoring is finished.
“When that times comes, depending on the amount of money, it would be offered to the town as a vote on where to place that money in terms of upgrading buildings or creating something new and different,” he said.
An official decision has not been made on how the landfill will be monitored in the coming years. Peter DeGraff, senior project engineer at Otter Creek Engineering, has been facilitating the whole process and will be in charge of making sure the landfill is monitored in accordance with state regulations.
One thing to keep an eye out for is four-wheelers, which can disrupt the cap’s ability to remain impervious when they drive up side of the capped landfill. Fixing damages to the cap could cost the town thousands of dollars, Vaczy said.
Vaczy acknowledged that the town has already faced some trouble keeping people away from the landfill.
O’Brien said the selectboard is pleased with everyone who helped to close the landfill and would like to thank Bob Harrigan and DeGraff of Otter Creek Engineering: “They were great to oversee the whole operation and make sure it went well.”
She also singled out Vaczy for his contribution. “He has been wonderful as a chairperson and has really been on top of this,” she said. “He is great to work with. The whole board is.”
O’Brien originally ran for selectboard in the hope of finding a way to close the landfill, and sees this latest milestone as an achievement.
“It had to be closed — it was just the matter of convincing people why,” she said.