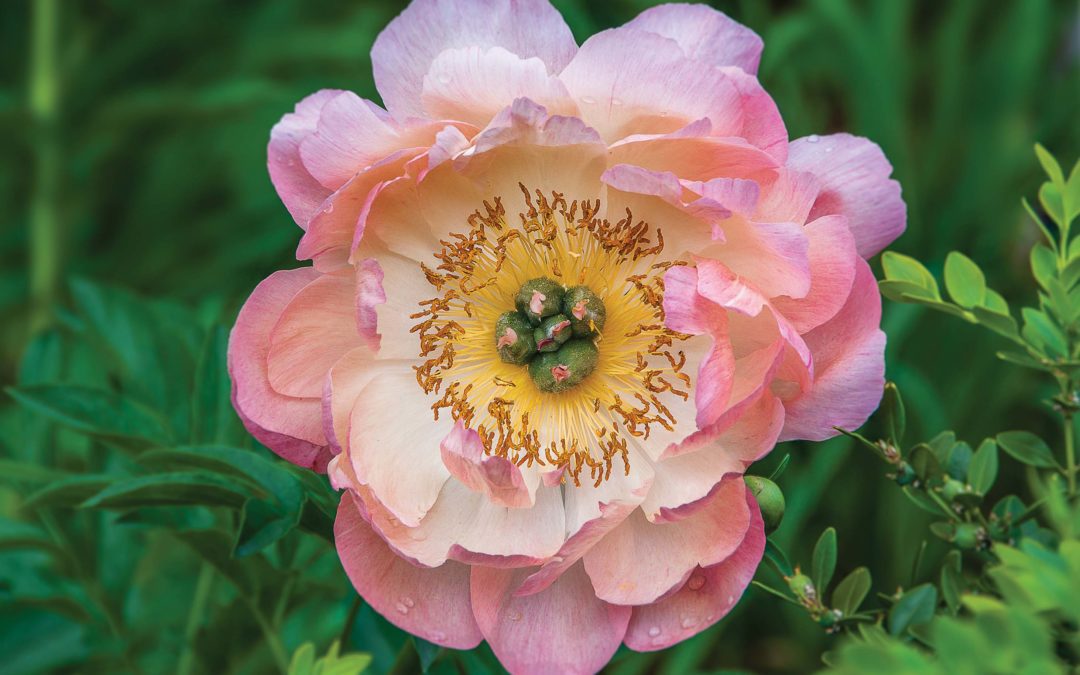 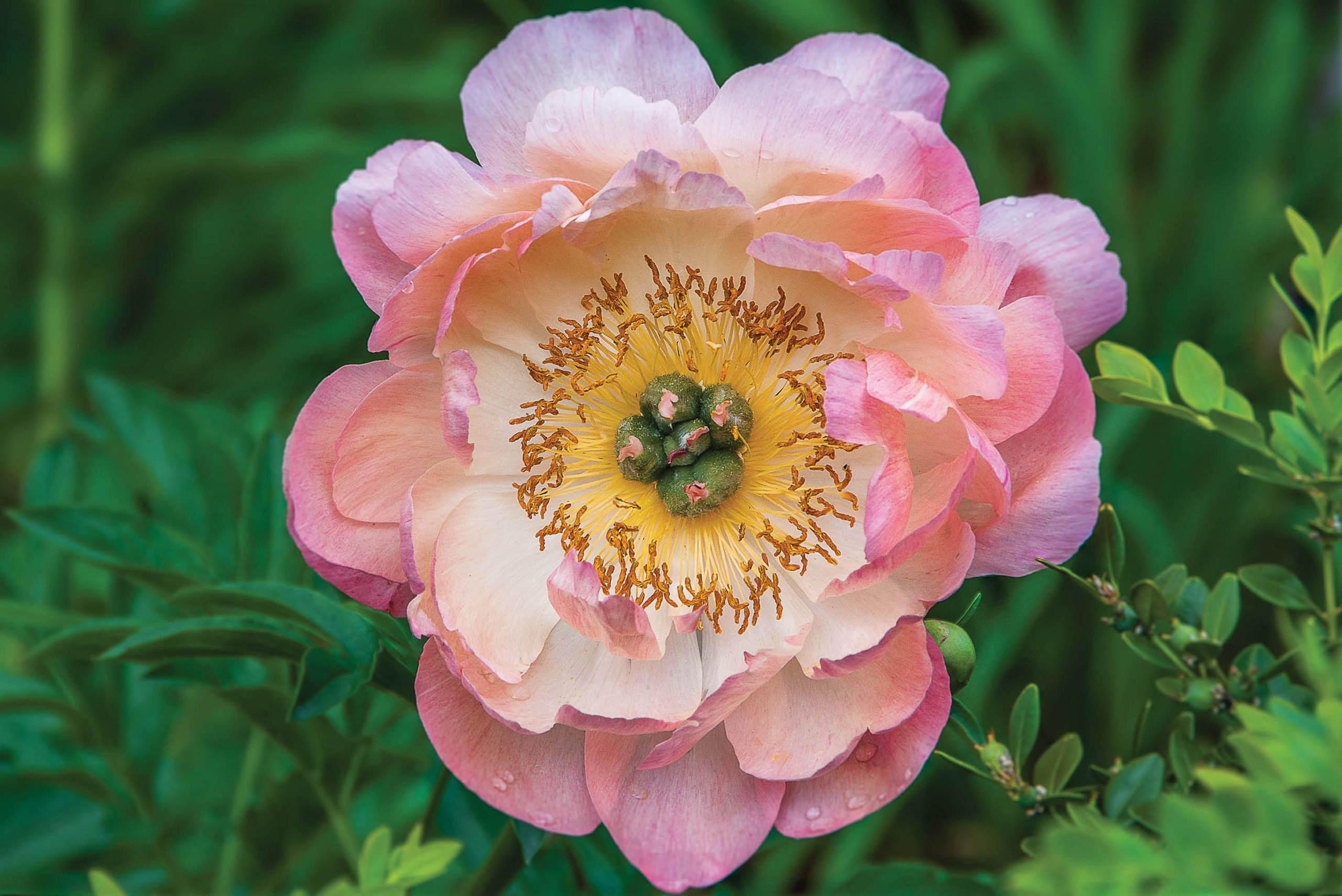 THE GENTLY COLORED petals of “Coral Charm” surround the yellow stamens and a central green pistil. Photo by Dick Conrad
By Judith Irven

June is peony time!
With their massive blooms in shades of red, pink, white and yellow, peonies — one of the most beautiful and venerated garden plants — are taking center stage in our Vermont gardens. For a match made in heaven, try combining them with some of the blue flowers, like salvia, catmint or irises, which also bloom in June.
Over 2,000 years ago the people of China started cultivating peonies as a flavoring for food. Then, during the elegant Tang dynasty (618-907 C.E.) they experimented with crossing different species to obtain more beautiful blooms — the genesis of a worldwide passion for these glamorous flowers. Soon peony cultivation was also flourishing in Japan, eventually migrating to England and France in the 18th century.

Vast array of peonies for gardeners everywhere
There are actually more than 30 different species of peonies — all members of the genus Paeonia and thus genetically related — native to the cold and temperate regions of Asia, Europe and western North America. The majority are herbaceous perennials (meaning they will die back to the ground each winter but re-sprout every spring), but a few have woody stems (enabling them to remain above ground throughout the year).
And this vast genetic pool is the basis of all the beautiful cultivated varieties — or cultivars — we know today.
Single peonies, such as “Krinkled White” have one or two whorls of broad, over-lapping petals surrounding a central mass of yellow stamens. These are the sophisticates of the peony world.
Semi-double peonies, like “Coral Sunset,” have three or four whorls of petals but the central mass of stamens is still easily visible.
Double peonies, such as the immensely popular “Sarah Bernhardt,” have sumptuous spherical flowers that are completely filled with numerous overlapping petals. Some blooms have more than a hundred petals!
Japanese or Anemone form peonies, like “Bowl of Beauty,” have one or more rows of large outer petals surrounding a mass of miniature petals, known as petaloids.
Back in 1923 the American Peony Society began awarding its Gold Medal to exceptional peony cultivars, a practice that still continues annually.

Itoh peonies — a gardener’s dream come true
Tree peonies, with their spectacular flowers and beautiful colors have long been coveted by gardeners everywhere. But typically their above-ground stems (where most of the buds that make next year’s flowers are produced) will not survive our harsh winters. So Vermonters will be especially interested in to hear about the “Itoh hybrids” — created by hybridizing an herbaceous peony with a tree peony — and thus combining the best features of each. Itoh peonies have enormous flowers up to eight inches across, with undulating petals encircling a froth of yellow stamens. The original cultivars were yellow, but today there are many beautiful colors including coral, red, pink and white, as well as their signature buttery yellow.
And, best of all, just as the herbaceous peonies finish flowering, the Itoh peonies burst into bloom, thus extending the peony season by almost three weeks.
The first flowers develop from terminal buds at the top of the stems and then, as these begin to fade, the side buds begin to bloom. In this way a single established plant can produce three dozen or more flowers. Itoh peonies also create an elegant mound of finely divided leaves. Thus, even after flowering, they continue to shine at the front of the border.

The amazing story of the Itoh hybrid peonies
Itoh peonies began as a plant hybridizer’s dream — to cross a tree peony with an herbaceous peony to produce an offspring with the best features of both parents. Many people tried this over the years — without any success. One problem was, because the bloom times for the two types of peony are several weeks apart, successful cross-fertilization is difficult. Also — although tree and herbaceous peonies are both members of the huge genus Paeonia — genetically they are only distantly related, making it difficult to achieve viable progeny.
Dr. Toichi Itoh, a Japanese botanist quietly working in Tokyo surrounded by the incredible devastation of World War II, was totally consumed with this monumental hybridization challenge. Finally in 1948 his dream came true. After thousands of meticulous attempts to dust tree peony pollen onto herbaceous peony pistils (the tubes that guide pollen down to the ovaries) a few seeds actually germinated.
Then tragically in 1956, and before his successful crosses had matured enough to produce their first flowers, Dr. Itoh passed away. So it fell to his family to nurture those very special plants, finally bringing them to flower in 1964.
Eventually American botanist Louis Smirnow received permission from Dr. Itoh’s widow to bring a few plants with huge buttery yellow flowers to the United States, naming them “Itoh hybrids.” Inspired by this success, peony breeders everywhere were motivated to replicate Dr. Itoh’s detailed techniques, leading to the new “intersectional hybrid” classification characterized by huge blooms and luscious colors. Finally in 1996 the American Peony Society bestowed its coveted Gold Medal on the Itoh hybrid called “Garden Treasure.”

A personal story
In 2000, when Itoh hybrids were still a rarity, the renowned peony grower Bill Countryman in Northfield, Vt., graciously invited Dick and me to visit his fabulous peony collection, where he was growing not only every American Peony Society’s Gold Medal winner to date, but also all the early Itoh hybrids.
As he drove us around his beloved peony fields in mid-August — when of course there was not a flower to be seen — he told us about each and every cultivar, and also recounted the incredible story of how the Itoh hybrids came to be. I was completely smitten! I decided to purchase a single root of “Garden Treasure” — for the astronomical price of $125! Dick was absolutely flabbergasted that I would even consider spending that much money for a single root!
Late summer is the perfect time to move peony roots. So I chose a sunny spot in my garden, enriched the soil with plenty of compost and carefully planted my new extravagance.
Now, every year towards the end of June, just as the flowers of the herbaceous peonies are fading, both Dick and I eagerly await the moment when our Garden Treasure starts to bloom. It is by far the most beautiful plant in our entire garden, and it has more than lived up to the promises Bill made to me all those years ago.
Today the price for Itoh hybrid roots has dropped significantly. So, as a special investment, you too might want to consider planting one or two in your garden.

Countryman’s Peony Farm: A new opportunity
Tragically in June 2005, within days of a planned visit of the American Peony Society for their annual meeting, Bill suddenly died. And, without his care, it would not be long before his famous peony fields were engulfed by weeds. But this sad story has a happy ending….
Four years ago, Connecticut dwellers Dan and Ann Sivori decided to purchase Countryman Peony Farm and restore Bill’s legacy. Their results are spectacular. Today the plants are all labelled and fields are almost weed free once more. And furthermore, on Thursdays, Fridays, Saturdays and Sundays between June 12 and June 30 you can visit Countryman Peony Farm in person. Check their Facebook page for more information.
————
Judith Irven and her husband Dick Conrad live in Goshen, where together they nurture a large garden. Judith is a landscape designer and Vermont Certified Horticulturist. She also teaches Sustainable Home Landscaping for the Vermont Master Gardener program. She writes about her Vermont gardening life at northcountryreflections.com.
You can reach her at judithirven@gmail.com.
Dick is a landscape and garden photographer; you can see his pictures at northcountryimpressions.com.