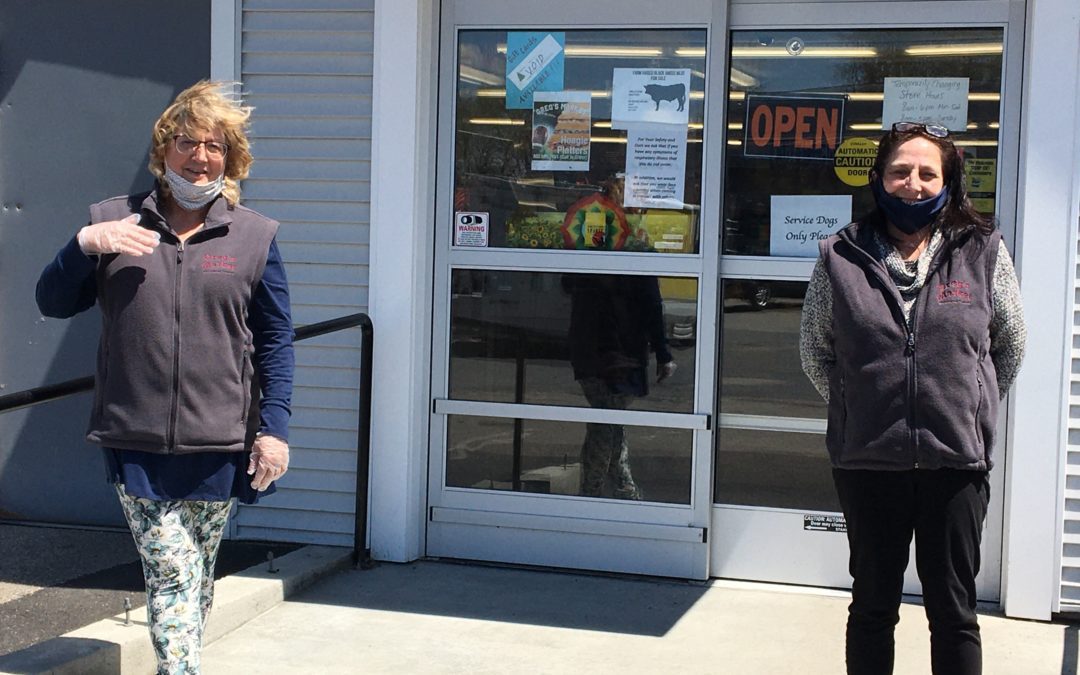 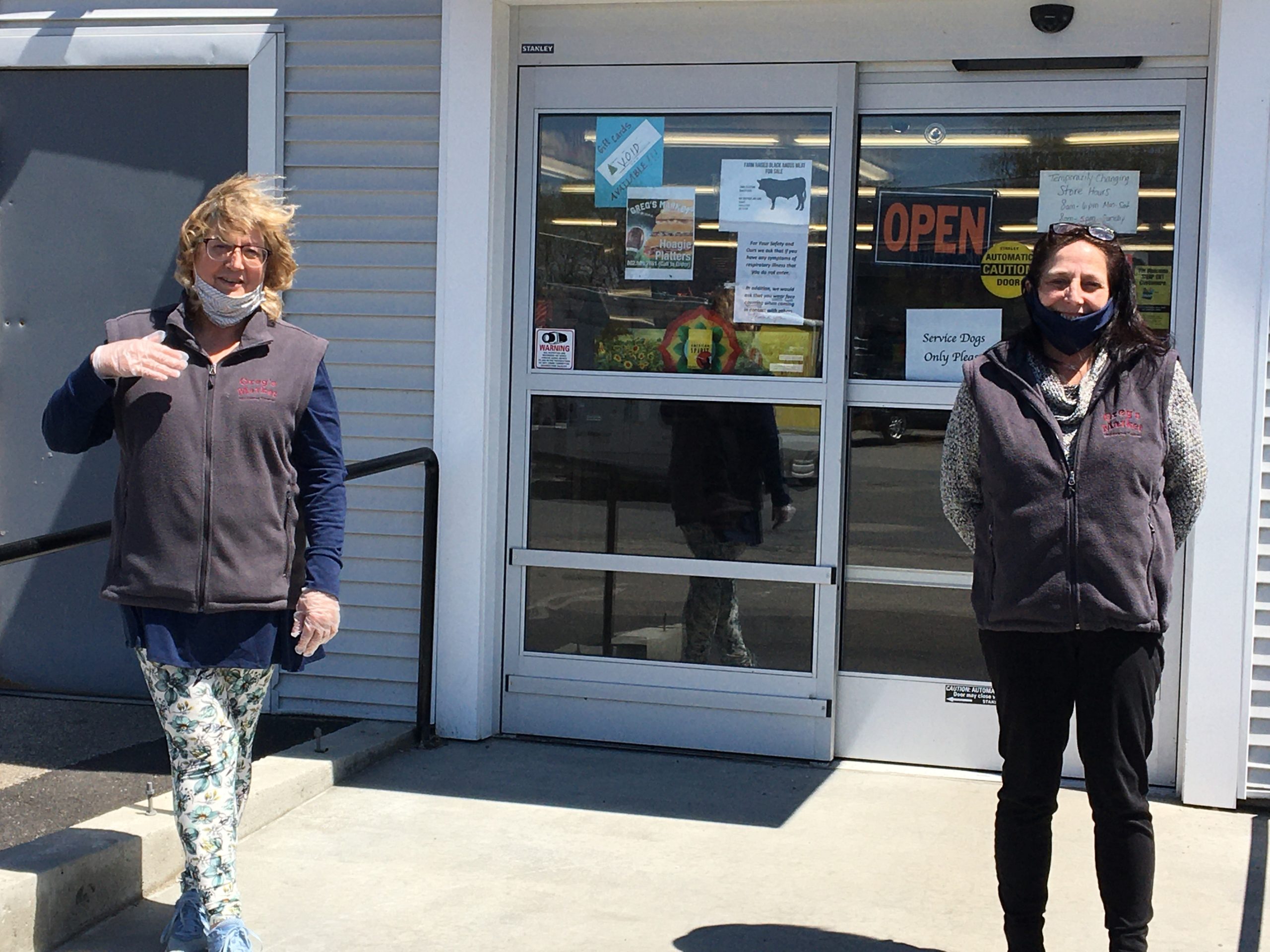 GREG’S MEAT MARKET manager Gail Daha, right, and Tae DeGray, who is in charge of store deliveries, are part of a legion of local supermarket workers who have been ensuring that Addison County residents have access to food and other essentials during the COVID-19 pandemic.
By John Flowers

They’re putting themselves at risk … Their lives have gotten more difficult in a lot of different ways, yet they’ve stepped up and shined.
— Greg’s Store Manager Gail Daha

MIDDLEBURY — Two months ago, supermarket clerks, truckers, housekeepers and other blue-collar workers joined the nation’s growing ranks of “unsung heroes.” Their contributions — keeping grocery shelves stocked, rooms sanitized and goods on the move — have become invaluable during the COVID-19 pandemic.
More than a dozen of those heroes work at Greg’s Meat Market, an independently owned grocery store off Middlebury’s Elm Street. Store Manager Gail Daha is proud of her crew, which has not only maintained services within the store, they’re delivering food to customers who can’t venture out.
And Greg’s workers are doing it at considerable risk to their own health.
“I have been so impressed by our core employees,” Daha said. “I’ve seen the best out of these people. They’re putting themselves at risk. Their expenses have gone up and day care is harder to find. Transportation has become trickier for some people. Their lives have gotten more difficult in a lot of different ways, yet they’ve stepped up and shined.”
Greg’s has seen an uptick in shoppers since the pandemic began, according to Daha. Some of it’s due to the ample parking and convenient downtown access to the store.
“Our smaller footprint became attractive to people,” Daha said. “And we don’t have the long lines you have at the big box stores. You can travel less territory to get the same products.”
And groceries have been in greater demand, given the restrictions on restaurants during the pandemic. People have been cooking at home now more than ever.
“People are hunkering down … They want quality, and we are more customized here,” Daha said.
Keeping the store staffed through a pandemic has been a challenge, she acknowledged. Some employees have had to take a sabbatical due to pre-existing medical conditions that could make exposure to the coronavirus lethal. Greg’s usually operates with 12-14 full-time staff and 10-12 part-timers. Daha has seen her workforce drop by around 25% since the pandemic began.
“We completely understand that,” Daha said. “And we didn’t want to replace them.”
An increasing number of workers began feeling uncomfortable about possible COVID exposure as the pandemic progressed. So these folks began limiting their work schedules in order to lessen their chances of contracting the virus.
“Those who have stayed and couldn’t necessarily afford to take time off, have been working a lot more,” Daha said. “I see a little stress building in some of those folks.”
But they’ve been faithfully executing their duties while taking precautions. Employees must wear masks, and disposable gloves when possible. Frequent hand washing is a must. All surfaces within the store — including refrigerator door handles and produce shelves — are disinfected daily.
Thanks to these measures, not a single Greg’s worker thus far has contracted the coronavirus.
“They come in every day, and have had to take on additional responsibilities.” Daha said. “Not only are they working more, they’re wearing more hats — under difficult circumstances. They’re breathing through masks, wearing layers of gloves and constantly sanitizing and cleaning. It’s a whole different environment, and they’ve embraced it.”
Tae DeGray is in charge of Greg’s curbside and home delivery service. As such, she knows how shut-ins depend on the store, particularly during this pandemic — when staying at home isn’t a choice for many; for them, delivery is a must.
DeGray had little time to put the delivery service into motion.
“It’s something we had to throw together quickly, and have ironed it out as we go,” she said.
“It wasn’t a question of whether we were going to do this or not; it was how are we going to make it happen.”
Demand for home delivery spiked during the initial weeks of the pandemic — to the extent the Greg’s phone lines were swamped.
“Some people were frustrated because they couldn’t get through,” DeGray said. “We were doing upwards of 40-50 (delivery) orders a day.”
And that’s to homes throughout the county, particularly in the population hubs of Middlebury, Bristol, Vergennes and even Brandon.
She credited Pierre Vachon for being a key player in the Greg’s delivery system. He’s still persevering, though the demand for delivered groceries has abated to around 20-30 per day.
Greg’s has also lent a helping hand to the nonprofit organization Helping Overcome Poverty’s Effects, or HOPE. The store gave HOPE officials an order book to get breakfast cereal, peanut butter, soup, oatmeal, canned vegetables and other products for its food shelf. Greg’s acts as a pass-through for the purchases, and HOPE simply pays what Greg’s is charged.
“(HOPE) put in a huge order when this all began, so we ended up getting everything they ordered, which was great,” Daha said.
DeGray is working more than 40 hours a week, but she goes home with a sense of pride and satisfaction.
“We worry about being here every day, but for the ones who are either quarantining or the elderly who can’t come to the store, it’s a great feeling to be able to fill a need as quick as we have, and make it work,” she said. “The (positive) feedback we get every day is constant.”
Editor’s note: The Independent reached out to Shaw’s and Hannaford supermarkets in an effort to speak with their workers. Each store required clearing interviews with their respective corporate headquarters, which declined or could not schedule interviews in time for this story.
Reporter John Flowers is at johnf@addisonindependent.com.