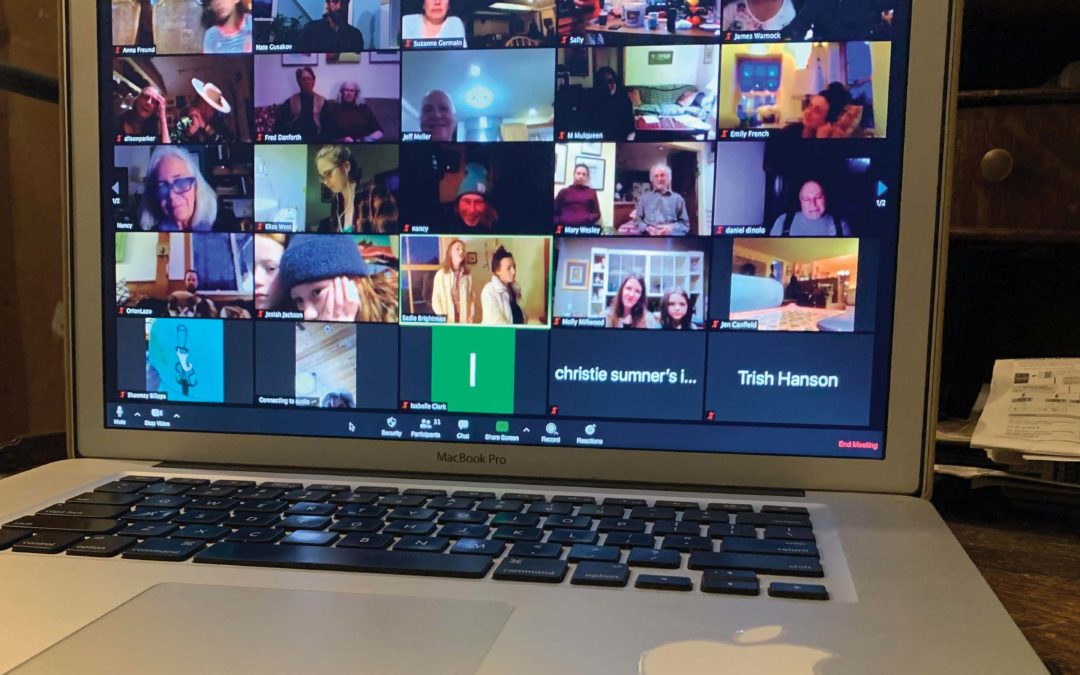 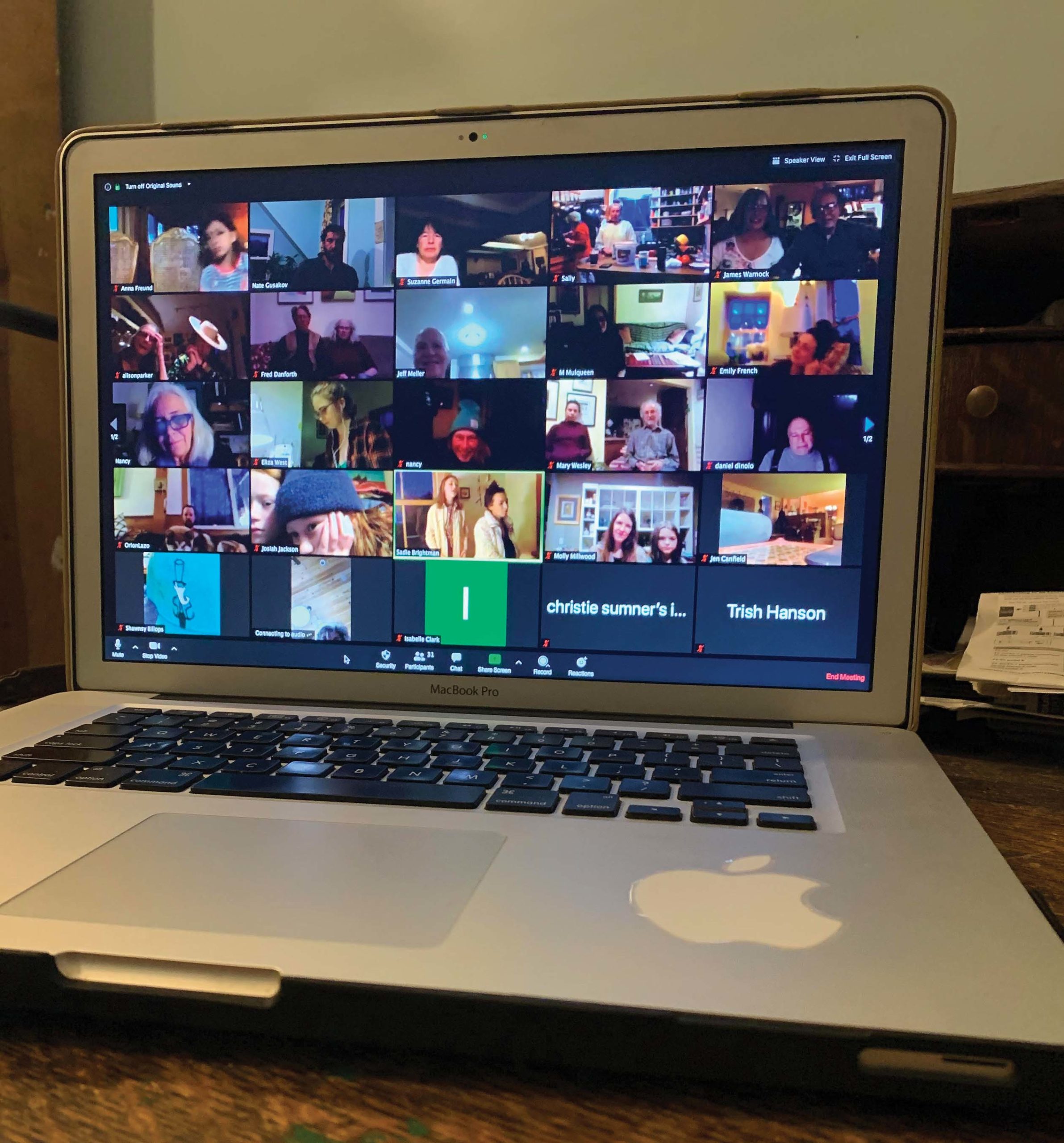 SCORES OF COUNTY residents last Saturday logged into an online performance space called “Lincoln Live,” where people to performed music, read poetry or told jokes while safely distant during the pandemic. The weekly events are the brainchild of musician Nate Gusakov.
By Christopher Ross

It’s a joy to be able to perform.
— performer Carol Reed

LINCOLN — Since its first Zoom meeting on April 11, a virtual open mic series called “Lincoln Live” has gradually increased in size and popularity. Last Saturday’s event — the fifth so far — attracted more than twice as many people as the first.
Its founder, Lincoln resident Nate Gusakov, is pleased with the way it’s going.
And he hopes it will end soon.
“It’s been wonderful to look at the gallery of neighbors’ faces, but also a little scary to realize that seeing people on a screen is the best we can do for a feeling of community togetherness,” Gusakov told the Independent in an email. “I’m so wary of this becoming normalized.”
Gusakov, a musician, came up with the idea for Lincoln Live in early April.
“I had thought that it would be nice for all of us house-bound Lincolnites to provide one another with a little variety and entertainment, so I set up a simple open mic via Zoom meeting,” he said.
The first three events attracted 20 to 30 audience members, mostly Lincoln residents, and five to 10 performers, ages 6 to 70-plus. Gusakov opened up the fourth event to the 5-Town area, and this past weekend he took it countywide.
“It’s great seeing people in their kitchens cooking dinner or hanging out in their living rooms,” he said. “People have been pretty good about keeping (their computer microphones) muted during the music, but then everyone unmutes when the song is over so that they can applaud.”
Saturday’s event featured folk music, show tunes, riddles and poetry.
One of the performers, Leicester musician and actor Carol Reed, was grateful for the opportunity to sing and play.
“Musicians have found ourselves increasingly cut off from all our planned gigs and festivals, and now studies are showing that singing runs the risk of conveying pre-existing infection more efficiently than speaking, so the physical isolation landscape has been very disheartening,” she said.
Reed is a member of the Francophone music trio Va et Vient.
Singing through the computer is a bit challenging, she said — she’d like to be able to hear people singing along, without a half-second time lapse — but “it’s a joy to be able to perform.”
“I love the fact that non-professionals have every chance to share as well, performing music, reading poetry, telling corny jokes, and generally reaching out to this wonderful community at a time when we have been too isolated,” she said. “There’s a lot to be shared as we try to adapt to weeks and months spent in daily comparative solitude.”
Lincoln resident Nancy Stevens has been reading poetry at the events.
On Saturday she explained to her audience that she used to cut the poems out of New Yorker magazines and keep them in a scrapbook.
“I started really enjoying poetry when my kids were little,” she told the Independent. “It seemed like there was never enough time to finish a book, but there WAS enough time to finish a poem or two. Then I just fell in love with the art form.”
A couple of weeks ago, Stevens read “Things to do in the belly of the whale” by Dan Albergotti. While the Independent cannot reprint the poem here, interested readers can see a stop-action video of it (which was heartily approved by the poet himself) by visiting youtube.com/watch?v=OHqWGOF5_Jk.
Gusakov doesn’t know how long the series will last, but with Vermont’s current Stay Home, Stay Safe guidelines, it seems feasible that it could go on for a while, he said.
But he’s not looking to establish a permanent series.
“It will continue until (in-person) live music is allowed again,” he said. When Bristol’s Hatch 31 resumes its Tuesday night music events, he added, “this will be done.”
For now, Lincoln Live (or Addison County Live) events get going every Saturday night at 7:30 p.m. For more information about how to join as a performer or audience member, email Nate Gusakov at nategusakov@gmail.com.
Reach Christopher Ross at christopherr@addisonindependent.com.