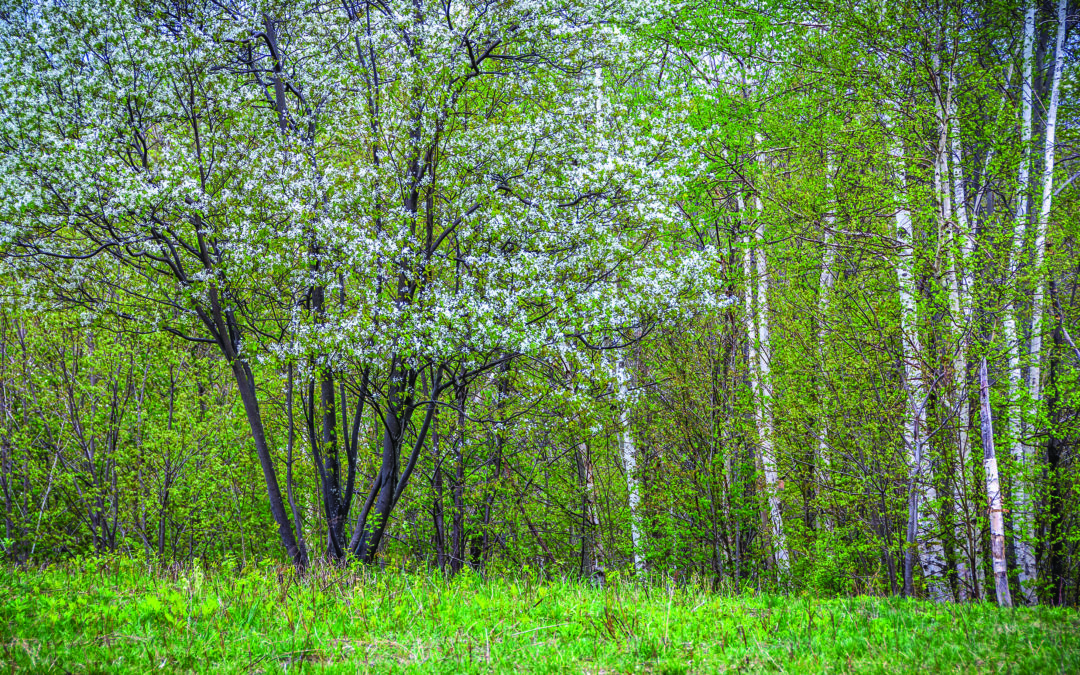 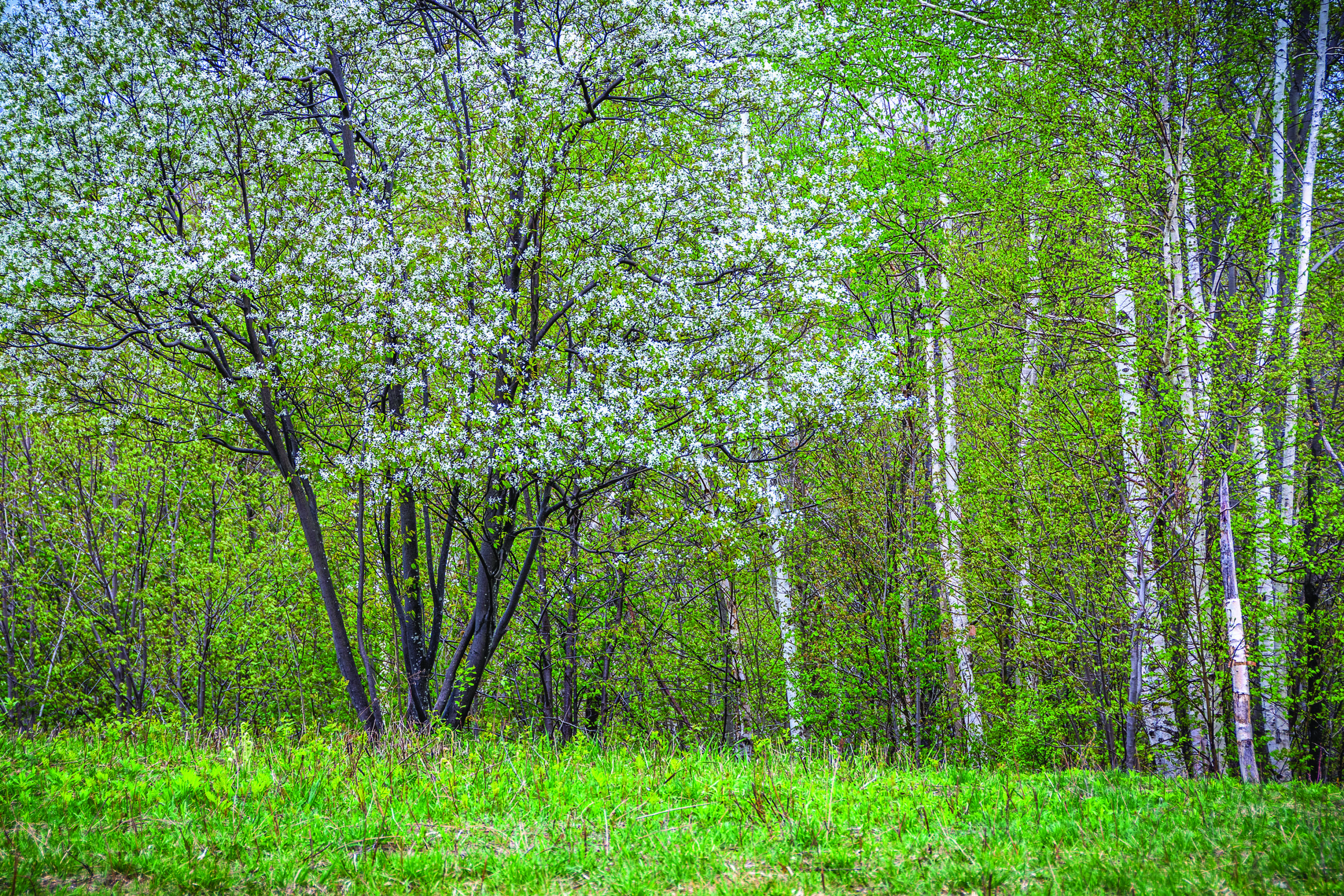 IN THE WILD: a serviceberry in full bloom at the edge of the woods. Photo by Dick Conrad
By Judith Irven

And right now, spring — that most fleeting of seasons — is working its magic in Vermont.
All around in gardens everywhere, we see the thousands of cheery yellow daffodils spreading their message of hope.
I would also like to tell you about two delightful small trees, adorned in their pink and white spring attire, like “Pink Ribbons and White Lace” that also proclaim spring’s arrival.

PINK RIBBONS
It is now about seven years since I first saw the most beautiful diminutive tree that was completely smothered in pink ribbons. I was heading over the new (at the time) Cross Street bridge in Middlebury, and there it was, nestled into the corner of the building that is home to the lawyers Neuse, Duprey and Putnam.
In my usual scramble to make a mid-afternoon appointment I was fully focused on my driving. And suddenly I caught sight of it!
Unable to stop my car in the traffic, I went on my way. But I returned a couple of hours later, found a nearby parking spot and walked back to admire this beautiful sight up close.
And now, every year, towards the end of April, I make a special point of coming that way into Middlebury so that I can enjoy it once again.
And I am happy to tell you that this year, right on schedule, (on April 27 to be precise) it was just starting to bloom.
It is a “Leonard Messel” Magnolia — and a magnolia growing in Vermont may feel almost too good to be true. Magnolias seem more reminiscent of stately southern homes than a small New England town.
I admired the way in which the gardener had chosen an exemplary spot for this delicate tree, cradling it in the southwest facing angle of the house, but far enough out from the corner so that it would have room to grow into its natural shape. In this spot it was also protected from a chance late frost and chilling winds. Remember, in last week of April, we had snow up here in the mountains!
Furthermore the dark slate-blue color of the building makes the ideal foil for the effervescent pink flowers. It is indeed “picture perfect.”

WHAT IS A “LEONARD MESSEL” MAGNOLIA?
It is one of several cultivars known collectively as Loebner Magnolias, created about 100 years ago by the German hybridizer Max Loebner, who experimented with crossing the Kobus Magnolia (Magnolia kobus) and the Star Magnolia (Magnolia stellata), both native to Japan.
Most Loebner hybrids are slow-growing small trees that are perfectly at home in suburban gardens and, if carefully sited, will usually flower even in colder climates.
It is claimed they are hardy in zone 4, but with the obvious proviso that, if we have a late cold snap, the fat emerging buds will be damaged, resulting in a flowerless year.
However the Leonard Messel hybrid, the result of yet more breeding in the beautiful gardens of Nymans in Sussex, England, produces its buds a week or so later than the others, thereby dodging most late frosts.
Many Loebner cultivars, including “Merriill” and “Ballerina,” have inherited the familiar white flowers of the parent Star Magnolia, which you also see growing in Vermont.
But my heart is won by “Leonard Messel,” with its frothy pink ribbons so reminiscent of the huge Saucer magnolias that grace the stately homes of the south.
So now every year, I make a point of returning to see that very special tree on Cross Street in Middlebury for a repeat of the spring magic.

WHITE LACE
Serviceberries are beautiful little trees that flourish along the hedgerows on the back-country roads of New England. For most of the year they are completely anonymous. But then one spring morning, almost like magic, they burst out of the shadows to cover themselves with delicate white flowers like white lace!
Around here the serviceberries bloom before the tall forest trees leaf out. So it is an unforgettable sight on a misty morning, looking down our winding country road, to see their lacy white veil peeking out from under the still bare canopy of maple and ash.

SERVICEBERRIES IN OUR GARDENS
With their delicate white flowers in springtime, as well as a lovely red color in the fall, serviceberries make delightful native trees for our gardens.
And since they tolerate shade and remain relatively small, they are the perfect choice for those difficult shady spots, such as near the northern side of the house. I also love to see them planted along the edge of the woods as a gentle transition between the cultivated garden and the wild beyond.

A PLANT WITH MANY NAMES
Serviceberries belong to the genus Amelanchier (part of the large Rose family) and actually have several common names, all with interesting origins:
The name “Serviceberry” comes because in New England they flower when burial services can now be held for people who died over the previous winter, when the ground was too hard for the families to dig their graves.
They are called Shad, or sometimes Shadbush, because they flower when the shad fish come up the rivers to spawn.
And finally they are known as Juneberries because their edible fruit ripens in June. Harvest the fruit for pies or for a fruit sauce over a nice yogurt. But hurry: you will be competing with the cedar waxwings, who adore these blueberry-size fruits.
Use whichever name you like — they all refer to the genus Amelanchier!
Within the Amelanchier genus there are actually several species that can be somewhat difficult to tell apart and that also cross-fertilize easily. Two species, both native to New England, the Allegheny Serviceberry (Amelanchier laevis) and the Downy Serviceberry (Amelanchier arborea), are small slender trees growing between 15 and 35 feet high when mature.
The Shadblow serviceberry (Amelanchier canadensis) is shaped more like a large shrub and matures at just 12 feet high and wide. And finally the Western Serviceberry (Amelanchier alnifolia) is a 10-foot-high shrub that is grown commercially for its fruit.
In addition to these species, there are several hybridized varieties, including Amelanchier Autumn Brilliance for a nice fall color and Amelanchier x grandiflora, which has larger flowers.

LOVELIEST OF TREES
Every spring, as I greet the flowering of our own native serviceberries in the woods around here, A.E. Housman’s famous poem about the wild cherry trees, which bloom in New England around mid-April, still runs through my head:
Loveliest of trees, the cherry now
Is hung with bloom along the bough,
And stands about the woodland ride
Wearing white for Eastertide.
Now of my threescore years and ten,
Twenty will not come again,
And take from seventy springs a score,
It only leaves me fifty more.
And since to look at things in bloom
Fifty springs are little room,
About the woodlands I will go
To see the cherry hung with snow.
— A.E. HOUSMAN
But, unlike the young poet, I do not have 50 more springs to enjoy. So I will live in the present and make the most of each and every spring as it is given to me. And each spring I cherish the beauty of our New England serviceberry, when it too is “hung with snow.”
————
Judith Irven and Dick Conrad live in Goshen where together they nurture a large garden. Judith is a Vermont Certified Horticulturist and garden writer. You can subscribe to her blog about her Vermont gardening life at northcountryreflections.com. Dick is a landscape and garden photographer; you can see more of his photographs at northcountryimpressions.com.