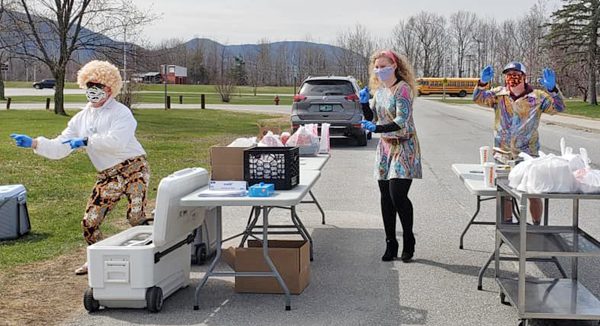 EDUCATORS AT MOUNT Abraham Union High School got their disco on as they helped with the “Meals on the Bus” program. From left to right, social studies teacher Scott Beckwith, math teacher Emily Ringquist and Safety and Wellness Coordinator Ryan Cornellier helped with meal delivery. Photo by Justin Bouvier
By Christopher Ross

BRISTOL/VERGENNES — A school bus may hiss and roar and squeak and fart in exactly the same way wherever it goes, but when it arrives in your neighborhood on a misty late-August morning it will sound vastly different than it did when it departed the previous June.
It will sound different again transporting a sports team to a rival school, or dozens of energetic fourth-graders to a local museum, or an entire route of steaming and steamed kids who were anticipating a snow day.
Now, in the middle of a global health crisis, these school buses sound entirely different again. Instead of transporting students to school they’re bringing food and supplies and connection to students and their families.
The buses sound like community. They sound like love.
On Friday, when those buses finished delivering meals in the Mount Abraham Unified and Addison Northwest School districts, they returned to their respective school kitchens bearing gifts.
“Today was School Lunch Hero Day and the buses came back from their routes with a ton of cards and letters from families telling us just now important these meals have been to them,” said Kathy Alexander, director of the MAUSD and ANWSD School Nutrition Cooperative.
Kids have been grateful for the continued connection with school, families wrote. For many students, the arrival of the meals bus marks the highlight of their day. And the meals are helping reduce stress in a challenging time.

METAMORPHOSIS
The School Nutrition Cooperative began developing the “Meals on the Bus” program on March 16, after Gov. Phil Scott ordered the closure of Vermont’s public schools to slow the spread of the coronavirus.
Figuring out the bus routes was the biggest hurdle for the program operators, Alexander said. In addition to developing a network of delivery routes they needed to create a system that would allow them to quickly match families with buses, then adjust inventories and drop-off points as needed.
School Nutrition Cooperative Assistant Director Laura LaVacca spent dozens of hours poring over route maps, trying to figure out how it would all work, Alexander said.
Betcha Transit was a key component of that process.
“Their bus drivers have been so collaborative and great to work with,” Alexander said.
Once they established the delivery logistics, nutrition officials focused on safety. Not only did they need to adapt existing food-safety protocols to a new system, but they also had to integrate all of the public health protocols designed to contain the COVID-19 pandemic.
Yet, after just three days of planning and development, Meals on the Bus was up and running.
Every day, 29 Betcha Transit buses with two “helpers” apiece fan out across the two school districts to deliver roughly 1,800 meals, which were prepared by 25 kitchen workers at five different schools — Mount Abraham and Vergennes union high schools, and Bristol, Robinson and Vergennes Union elementary schools.

NEW ROUTINE
Mount Abraham Assistant Principal Justin Bouvier described a typical day at his school.
Bouvier starts his morning at 6:30, he said, working out schedules with Jennifer Willey, MAUSD executive assistant to the superintendent.
An hour later he arrives at Mount Abe and sets up his laptop and infrared thermometer, which he uses to take the temperatures of cafeteria and support staff, teachers, and bus helpers.
When buses start arriving in the parking lot next to the cafeteria, former Mount Abe co-athletic directors Jeff and Mary Stetson load each one up with two or three large coolers packed with prepared meals, along with a few crates of milk and occasional learning supplies.
Two support staff members travel with each bus, greeting students and families, passing along supplies and documenting food delivery.

POSITIVE ATTITUDES
Many of these staff wear costumes.
One day they went disco. On another day they dressed up as characters from Disney’s “Frozen.”
When they return to their schools, workers sanitize the coolers and crates, and the whole process starts over again the next day.
Staff morale has been “overwhelmingly positive,” Willey said.
“They enjoy being able to see the students — from a distance, of course.”
MAUSD Superintendent Patrick Reen praised the kitchen staff.
“I was really impressed with the safety and organization displayed in each of the cafeterias,” he said. “Temperatures were being checked, masks and gloves were being used and people were keeping their distance whenever possible. Dozens of coolers were labeled by bus with a checklist of the meals to be delivered on that route. I couldn’t believe the abundance of positivity I saw in the kitchen.”
When Reen stopped in to thank kitchen staff for their hard work one day, he found them dancing to music while preparing food.

MAKING DO
Maintaining the menu has been challenging at times, Alexander said.
“There have been considerable food shortages or delays in getting particular foods. If you think about it, the entire country is doing what we’re doing in one form or another, so when we were doing turkey sandwiches, everyone else was probably doing turkey sandwiches, and the demand for turkey just got crazy.”
In response to inconsistent food supplies, the federal government has granted waivers to the “meal pattern,” the set of regulations governing nutritional guidelines.
“We can’t always guarantee that we’re going to have a particular whole-grain product that we rely on,” Alexander said. “It has gotten better in the last week, but we’ve had to ‘pinch-hit’ here and there,” Alexander said.
Now that Gov. Phil Scott’s remote-learning mandate has been extended until the end of the school year, the nutritional cooperative is settling in for the long haul.
“We have another six weeks, so some of the schools are going to start mixing their menus up a little bit and put a few hot items on menus and send those home as a special treat for kids,” Alexander said. “One school is doing ravioli and another one is trying pulled pork.”

NOT NICKEL & DIMING
All Meals on the Bus meals are free for families, thanks to emergency adjustments made by the USDA, which funds school nutrition programs.
“If everything was normal, as of June 20 or so, we’d be kicking into our summer food service program, which is a special USDA program that allows school nutrition departments or programs to offer free meals to kids in areas where 50% or more of the population qualifies for free or reduced meals,” Alexander said.
Meal reimbursement for schools operating summer meals programs is higher because of transportation and other costs involved.
When the pandemic hit, the USDA permitted schools to begin their summer nutrition programs early, and waived certain regulations, allowing school districts to “get creative about getting meals to kids and families wherever they are,” Alexander said.
“That was a huge boost and a very important piece of why this is working for schools across the country.”
Because USDA summer meals programs provide “blanket eligibility” to qualifying districts, it has the effect of equalizing everyone, Alexander said.
“This is not the time for nickel-and-diming anybody. Everybody’s in the same boat and everybody needs food and help.”
During the pandemic, that need for help is expressing itself in different ways — not all of them financial, she said.
“For some people, it’s because both parents are essential workers and they’re working at night and they have to rest and sleep during the day, so getting two meals for their kids in the middle of the day is huge for them. Other families might say, ‘I’m working and so my kids are at my parents’ house all day and it’s really hard for them to get two meals a day.’ And then there are the families who can’t work during the pandemic and this is helping them stretch their dollars. It’s nice for us to be able to do this — and do it for free, for everyone, no questions asked.”

ESSENTIAL SERVICES
“The fact that our school nutrition programs have been at the center of this pandemic across the nation is very telling,” Alexander said. “I think 30 years ago that wouldn’t have happened. Schools wouldn’t necessarily have been seen as the place to support families in that way, necessarily, but now we are.”
School nutrition programs not only support families but they support education itself, she said.
“Our work 100% supports the success of kids being well-educated in school. I think we (providers) always known that, because it’s at the forefront of our mission, but now it’s very evident that we have an important place within the school.”
That is not something that has always been acknowledged, she said.
“Our profession has not always enjoyed the kind of recognition for the role we can play in education and in overall community health, but I am proud and gratified that it has become clear during this difficult time that our work is central. Our school nutrition professionals are really stepping up to the plate with their skills and experience and the recognition they got for their work (on School Lunch Hero Day) is well deserved.”
Reach Christopher Ross at christopherr@addisonindependent.com.