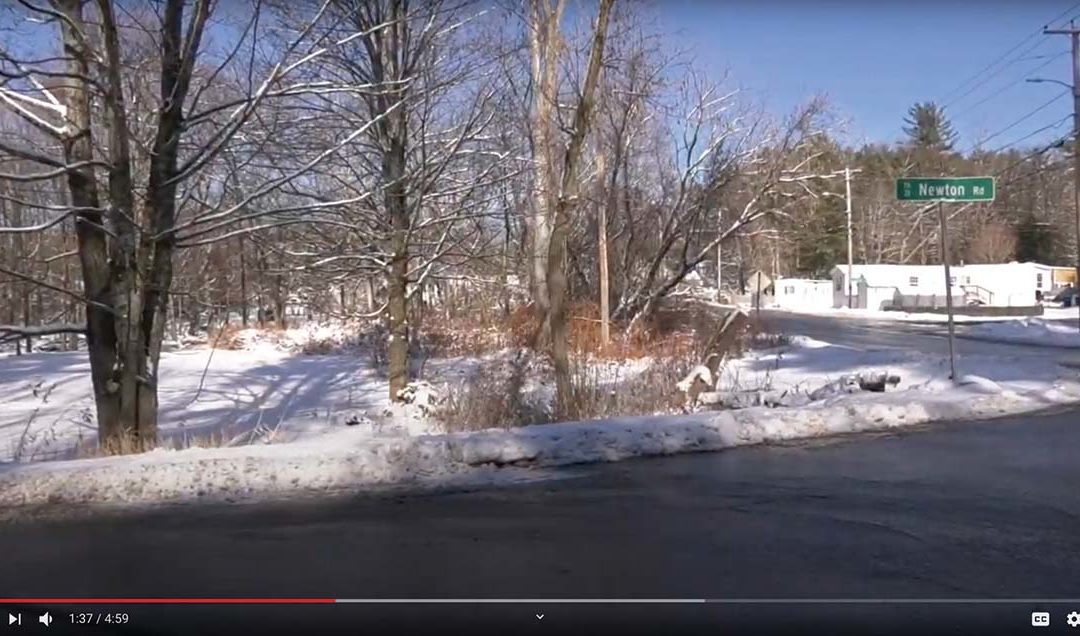 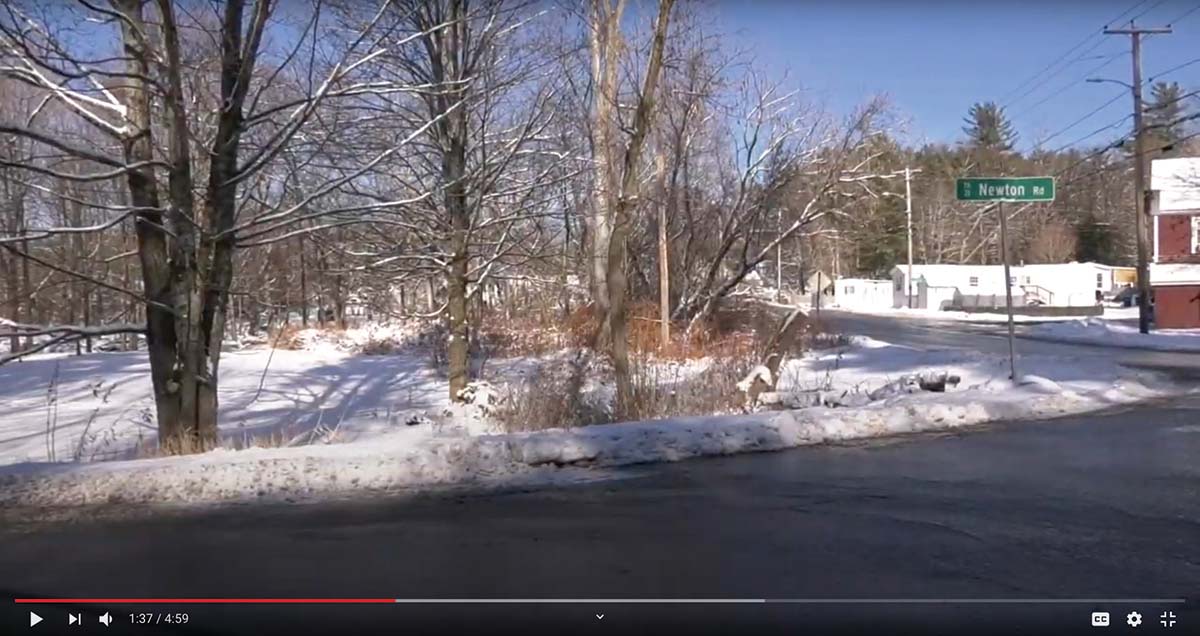 OTTER VALLEY STUDENTS Mickeen Hogan and Isaac James won first place in the Brandon Environmental Film Competition for their film “In Our Backyard” about flooding along Newton Road in Brandon.
By Lee J. Kahrs

The pandemic is a good indicator that you can’t go at life alone, and you can’t go at award-winning video production alone either.
— Cristina Kumka, Stafford Tech teacher

BRANDON — One of the things that connect one person to another is stories. Whether it’s shared experiences or unique perspectives on issues, stories can not only bring people together, they can also raise individuals up and make them think.
The beauty is in the mediums used to convey those stories, be it writing, film, theater, dance or music.
“I’m constantly thinking about how we communicate our stories,” said Michael Shank, Ph.D.
An environmentalist and lover of the arts and education, Shank created the first annual Brandon Environmental Film Competition this year in order to highlight the film talents of local students and the environmental issues they care about.
The winners were announced May 1, and while there won’t be a public screening due to the pandemic, the films can all be screened online.
By day, Shank is the communications director for a global nonprofit call Carbon Neutral Cities Alliance, which is comprised of 22 cities around the world that are leading on environmental and climate policy. A Brandon resident, he is a leader in environmental stewardship and renewable energy. He is adjunct faculty at New York University’s Center for Global Affairs, where he teaches graduate courses on sustainable development, power and politics, and climate and security.
Shank said he decided to create a film competition giving local students an outlet to showcase their filmmaking skills and bring environmental issues to the fore for a different generation.
“I don’t have any kids, and I love being able to support local schools and teaching,” Shank said. “The arts are always impactful, but especially film, and music in particular. The arts have the power to transform us socially and emotionally.”
Otter Valley students Mickeen Hogan and Isaac James won first place for their film “In Our Backyard” about flooding along Newton Road in Brandon. Both are students in the video communication program at Stafford Technical Center led by Cristina Kumka.
In all, more than 21 films were submitted for judging, ranging in subject matter from plastic to the health of Lake Champlain to animal abuse to air pollution.
Shank said the competition was important not just to promote environmental concerns, but to nurture young minds as well.
“There were skills-building and professional development and confidence-building opportunities here, too, as far as putting their voices out there,” Shank said of the student competitors. “It takes a lot of courage. The students put themselves out there in front of the camera, and they’re learning something new about an issue.”

STARTS WITH TEACHERS
Shank also does a good deal of volunteer work and is a mentor with Everybody Wins! — a literacy program at Neshobe Elementary in Brandon. He said he happened by the school library one day last fall and visited with librarian Hannah Fjeld.
“Hannah was teaching the kids about film,” he said.
Seeing a potential collaborator, Shank convinced Fjeld to take responsibility for the elementary submissions to the Brandon Environmental Film Competition. She made sure the kids had access to editing software and stock footage.
Fjeld said she was thrilled to work with the students on their competition entries. For three years she has been working with Neshobe School students using the WeVideo online video editing software.
“I really love working on video with the kids,” she said. “I do it a lot, and I love it. It’s such an important skill to have these days, especially now because the need is so much more apparent with the pandemic.”
When Shank suggested his idea for an environmental film competition, Fjeld was on board immediately.
“In all of my teaching, I want my students to have authentic, real-world reasons for what they do,” Fjeld said. “It helps to have a reason why you’re learning and practicing a skill.”
At Stafford, Kumka currently has 14 students in the video communication program, which made a fairly seamless transition to digital distance learning after the COVID-19 pandemic hit seven weeks ago. A former journalist, Kumka teaches kids video production basics, then offers professional, hands-on experience in producing client projects like local public service announcements and commercials.
Kumka chose OV’s Hogan and James to work together on an entry for the film competition.
“Mickeen and Isaac earned the right to work on a client project,” she said. “And I thought they would do a great job.”
They did, under Kumka’s guidance. She said the hardest part for the young filmmakers was choosing a topic. So she asked them what three things they cared about the most.
“The both responded with the same answers: family, fun and friends,” Kumka said. “So I asked them, what in the environment affects your family, your fun and your friends? If you don’t care about the topic, it’s not going to be good.”
James lives on Newton Road in Brandon and mentioned the repeated flooding in that area, which has gotten worse over the last 15 years due to increased torrential rains creating 100-year flood conditions along the Neshobe River. The road lies along the banks of the Neshobe between North Street and Country Club Road. It flooded badly during Tropical Storm Irene, and two more times since the 2011 storm. Since the last flood in 2015, several homes have been demolished following a federal buy out, while others have taken steps to make their homes more flood-resistant.
The film takes both a personal and local look at the impact the flooding has had on James and his family, and how flooding can be mitigated in the future.
Kumka said James and Hogan were a great filmmaking team.
“Isaac really spearheaded the project, and Mickeen was like this logistical wizard who came up with the questions,” she said. “Mickeen was like the producer and Isaac was the audio/camera op/roving reporter. I feel like Isaac really delivered on Mickeen’s vision.”

THE WINNERS
Kumka said the hardest part was putting all the interviews and the footage together to make the film, but for Hogan and James, that was the best part.
“Editing is the most fun for me,” said James, 17. “Everyone has their own style of editing, and I just love it.”
Hogan, 19, concurred.
“My favorite part is editing,” he said. “I think that’s something I’m talented at.”
The two filmmakers were friends before they made “In Our Backyard,” and they both agreed that being friends helped them be better filmmaking partners.
“I do think it helped the process,” Hogan said. “It’s easier when you can put your heads together. When people have agreement on something, they will both want the same thing and will help each other.”
James agreed.
“It was fun working with someone because doing it alone would’ve been so hard,” he said. “We’ve known each other for a while so we know what we can and can’t do.”
Hogan added that for him, writing is key and goes hand in hand with filmmaking.
“I like to write in my free time,” he said. “And any good film starts with writing.”
While teaching and learning in a pandemic has been challenging for teachers and students alike, Kumka said she was very pleased with James and Hogan and they’re finished product.
“It is a collaborative, amazing process and the kids become such better friends,” Kumka said. “I was very, very impressed with what came out of this. The pandemic is a good indicator that you can’t go at life alone, and you can’t go at award-winning video production alone either.”