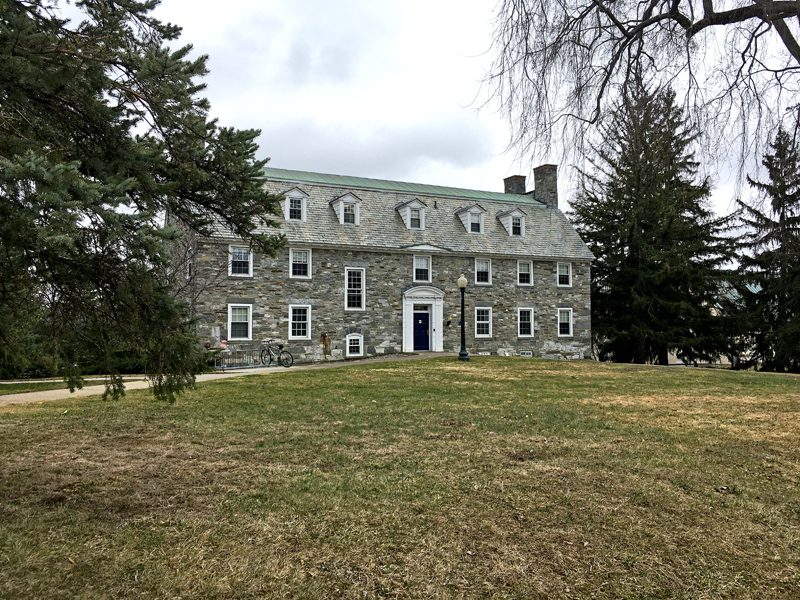 MIDDLEBURY COLLEGE HAS made its Munford House dormitory available to house up to 31 staff from Porter Medical Center as a contingency. None of the staff had moved into this dorm, or two others offered by the college, as of Thursday afternoon.
By Christopher Ross

MIDDLEBURY — In a continuing effort to work with the town and hospital on measures to address the coronavirus pandemic, Middlebury College has opened one of its dorms as temporary housing for a small number Porter Medical Center (PMC) staff.
The employees, who work with residents of PMC’s Helen Porter Nursing and Rehabilitation Center, were scheduled to move into Munford House — a residence hall on South Main Street, just north of the Mahaney Arts Center — on Thursday, according to an April 1 announcement by college officials. Porter spokesperson Ron Hallman on Thursday afternoon said plans to move staff into college housing had not been finalized.
The staff, whom PMC refers to as “the working well,” do not require isolation or quarantine, college officials assured the campus community.
“The college is helping Porter implement a strategy that is designed to limit well-worker exposure to others because it reduces their chances of becoming infected at home or in the general community and then infecting residents of the Helen Porter Nursing and Rehabilitation Center,” the announcement continued. “This strategy also reduces the probability that workers would infect the general public, their families, and the residents of the center, a situation that has occurred in other areas of the country.”
As of this writing, the nursing facility has no known cases of COVID-19 among residents or staff.
“Throughout our meetings with senior leaders at Porter, we have used one constant guideline for all our work: the safety and health of our staff and students,” college officials wrote. “All aspects of our agreement with Porter are based on this priority.”
Only about 100 of the college’s more than 2,000 students remain on campus. The rest were sent home after the college announced on March 10 that it would suspend in-person classes until further notice.
None of the remaining on-campus students live near Munford House, college officials said.
Middlebury College has also identified at least two other buildings for temporary medical-staff housing, should it be needed:
• Meeker House, which is located just north of Munford House.
• Porter House, a smaller building on Porter Field Road, not far from the other two.
The maximum number of employees who could stay at Munford is 31. Should Meeker and Porter be needed in the future, they can house 18 and 11, respectively, according to college spokesperson Sarah Ray.
The college has removed from those buildings any personal belongings that were left behind by the students who were living there just weeks ago.
“We are pleased that we can be responsive to the community and its needs while keeping safety as our primary goal,” college officials said.
“The college and Porter have reached an agreement for staff to use college dorms during this challenging time as part of our contingency planning, but we have not yet implemented this plan and are still making final decisions regarding numbers of staff and what the exact timelines and processes will be as we transition to the implementation phase,” Porter’s Hallman said. “We and working on those details right now.”
Reach Christopher Ross at christopherr@addisonindependent.com.