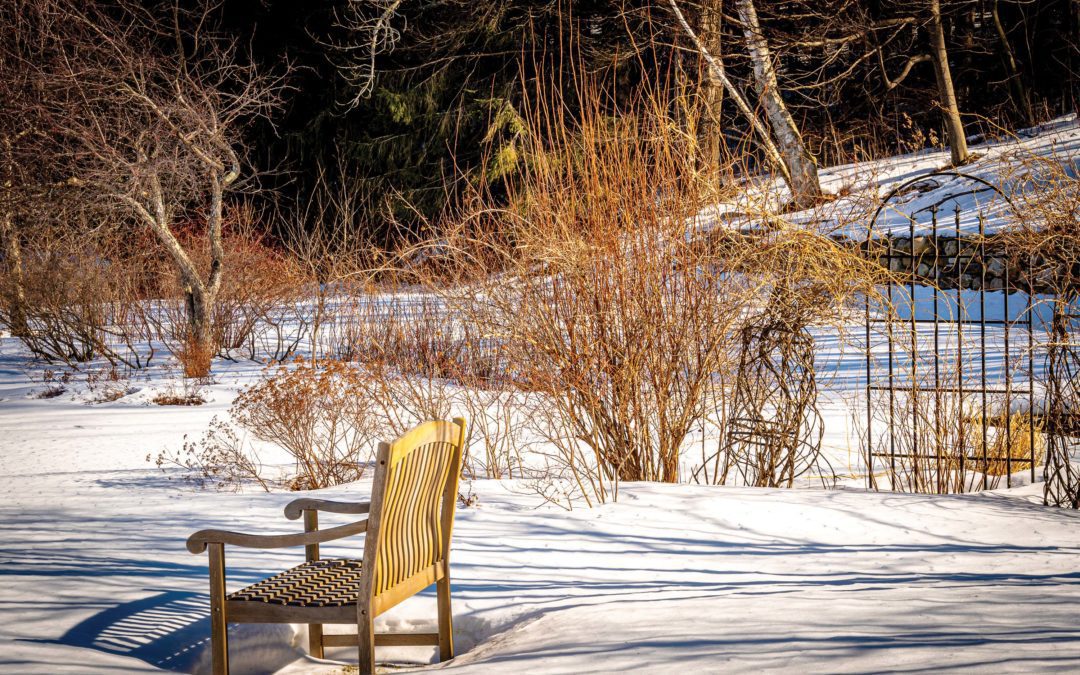 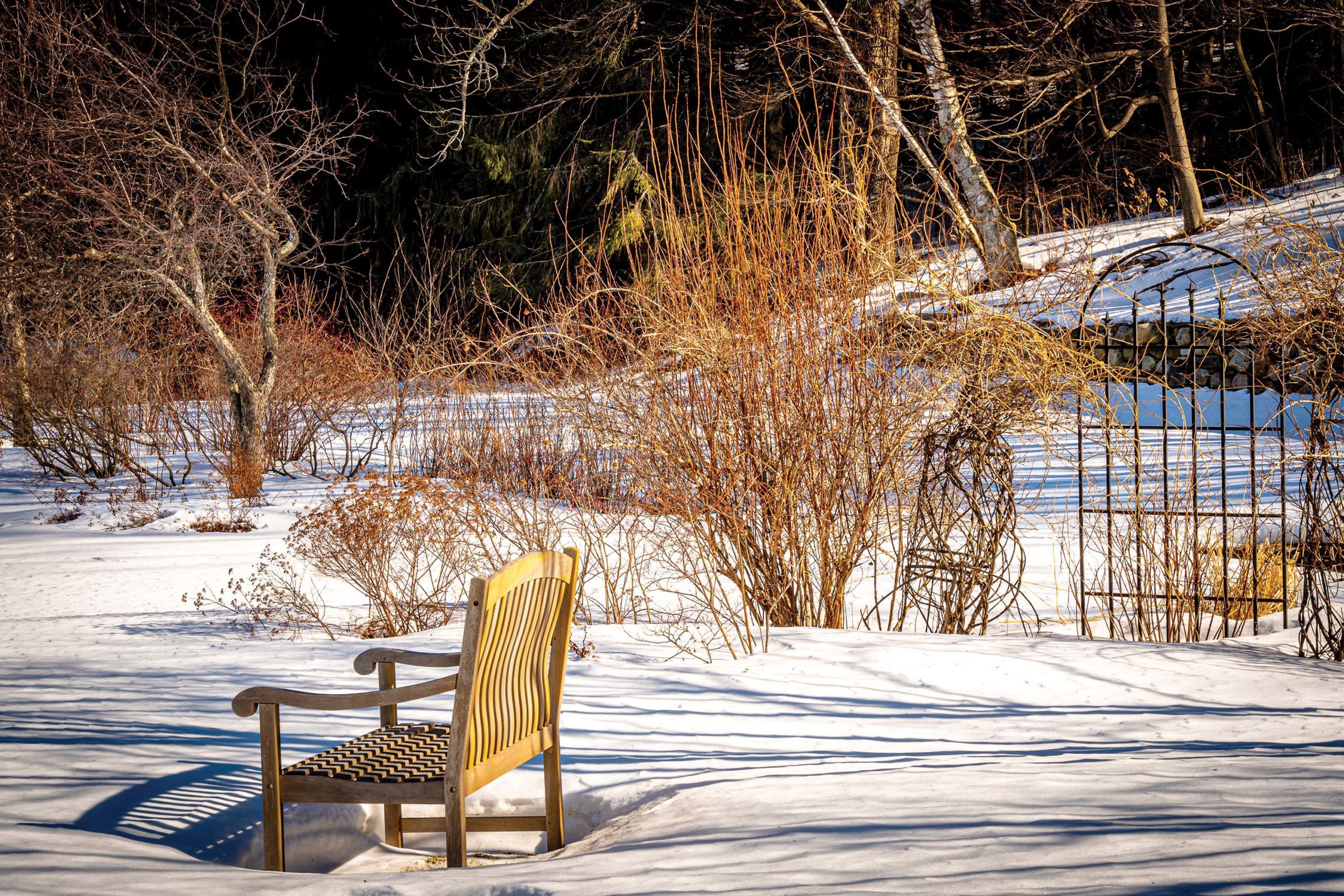 THIS IS WHERE Judith began her pruning session — a very messy Ninebark and an out-of-control honeysuckle.
By Judith Irven

Right now I have my usual case of cabin fever, which hits most of us at this time of year. Even with a healthy dose of winter snowshoeing, by the time March rolls around I always find myself yearning to get out in the garden.
According to Wikipedia cabin fever is:
“A claustrophobic reaction, manifested as extreme irritability and restlessness, that takes place when a person or group ends up in an isolated or solitary location, or stuck indoors in confined quarters for an extended period of time.”
When experiencing cabin fever, a person may tend to sleep, to have a distrust of anyone they are with, or to have an urge to go outside even in bad weather.
And, as a therapy, it cites a scientific study that shows simply getting outside and interacting with nature will improve both your cognitive abilities and your sense of well-being.
But this is probably something you probably already knew intuitively.

LATE WINTER: A PERFECT TIME FOR PRUNING
So, if you are a gardener beset by cabin fever, may I suggest an excellent antidote: unearth your pruning saw, sharpen your clippers and get going on some late winter pruning.
Even though we humans are now eagerly anticipating spring, our trees and shrubs are mostly dormant, making this a great time for pruning. Pruning stimulates new growth that will kick into high gear the moment spring arrives.  And, without its leaves, the structure of the plant is readily apparent, which makes pruning that much easier for the gardener.
Pruning is the removal of any part of a plant to promote plant health and a desirable growth form. And it certainly covers a host of specialized goals and techniques, everything from training young trees for long-term structure and pruning fruit trees to enhance production, to creating intricate bonsai.
However the goal of my late winter pruning is simply to ensure my existing shrubs and small trees continue to thrive and look great in the garden.  And the techniques are not difficult.

EASY DOES IT
I work with one plant at a time, and before making a single cut, I stand back and examine the plant carefully. I look for old or diseased wood, and analyze whether the interior looks cluttered.
With my first cuts I remove any branches that are dead, diseased, broken or really old, each time cutting all the way back to a strong live branch, or oftentimes for shrubs right at the ground.  These are called thinning cuts.
When making a thinning cut, it is critical not to leave a protruding stub; it will eventually die and in the meantime it creates an entryway for disease. Furthermore it looks ugly.
At the same time take care not to cut too close the parent branch. Locate the “branch collar” — this is the ridge of bark at the junction between the side branch and the trunk and it is also an active growth site. By making your cut just outside the branch collar, new bark will quickly grow over and heal the wound.
Next look for branches that are rubbing their neighbors, or will become that way in another year or two. Rubbing branches also create entry points for disease, and their contrary directions spoil the aesthetics of the plant. So, for the good of the whole, I will sacrifice one.
I also remove any suckers, which are thin straight twigs growing straight upwards. Suckers take up valuable resources from the plant and they also detract from its overall appearance.
Next I look to see whether the plant would look better if it were slightly more compact. If the answer is “yes,” I trim back the outermost branches, using what are known as heading cuts, made across the twig just above robust outward-growing buds.  These buds will become new growth points in the coming season. So, before cutting, I pause to visualize how the plant will look, a year or two from now, when the buds have grown into new twigs or even complete branches.
Finally, I stand back again, and contemplate whether, by removing a few healthy branches, I could achieve a less cluttered interior.
However I try not to overplay my hand. To ensure the plant continues to manufacture sufficient food, I aim to leave approximately two-thirds of the leaf-bearing surfaces after my pruning is complete.

DECLUTTERING MY ‘SUMMER WINE’ NINEBARK
I have several different cultivars of the native shrub Eastern Ninebark (Physocarpus opulifolius), including a pair of Summer Wine Ninebark. This particular cultivar, which has arching branches and grows about six feet tall and wide, has dark leaves that contrast beautifully with nearby plants with yellow flowers. Between my duo of Summer Wine Ninebarks I grow a pair of yellow honeysuckles that climb up two metal obelisks and in the center a large yellow Baptisia.
This past March 8, even though there was still plenty of snow in Goshen, the air temperature was delightfully warm, making it a great day to go to work on my two Summer Wine Ninebarks.
I find that most Ninebarks have a tendency to sprout an abundance of vertical suckers which detract from their overall arching shape. So I started by removing all the suckers back at the main stem. Then, to improve the overall appearance and to emphasize the underlying arching shape, I took out several crossing branches.
I also decided to cut the two nearby honeysuckles, which had gotten out of control, right back to the ground. I anticipate that, once the soil warms up, their root systems will readily sprout plenty of new growth.
In the first picture you can see one of the shrubs and honeysuckle before I started, while the second picture shows the final results, including the large pile of brush I accumulated from both the Ninebarks and the honeysuckles.
All that remains to be done now is to haul the brush into the woods to create wildlife habitat and then, once the ground thaws, to straighten the obelisks.
The tools I used for this job were simple. Last fall, anticipating my late winter pruning foray and knowing my tool shed might still be snow-bound, I stored my garden clippers, a folding saw and small pair of loppers indoors. And indeed, these three favorite tools were all that I needed to tame my shrubs.

WHAT NOT TO DO AT THIS TIME OF YEAR
In your enthusiasm to get outside please bear in mind that some pruning jobs are best postponed till later, especially:
•           In late winter the sap is running full bore in our maple and birch trees, and pruning causes excessive bleeding. Prune them during the summer or in early winter.
•           Spring flowering shrubs, like azaleas and lilacs, set their flower buds the previous summer. To avoid sacrificing any blooms in the coming season, prune them within a month after they finish flowering.
•           Conifers are best pruned after the first flush of new spring growth.
•           Roses should be pruned when the first green buds emerge in spring, when you can easily see and remove any winter die-back.
To learn more… Pick up a copy of “Pruning Made Easy” by Lewis Hill (Story Publishing). This classic book on pruning by a beloved Vermont author has clear instructions and great illustrations.
NOTE: Judith will be teaching a hands-on Design your own Garden workshop at the Middlebury Studio School again this spring, May 9, 16 and 23. Get the latest info here.
Judith Irven and Dick Conrad live in Goshen where together they nurture a large garden. Judith is a Vermont Certified Horticulturist, garden writer and landscape designer. You can subscribe to her blog about her Vermont gardening life at www.northcountryreflections.com. Dick is a landscape and garden photographer; you can see more of his photographs at www.northcountryimpressions.