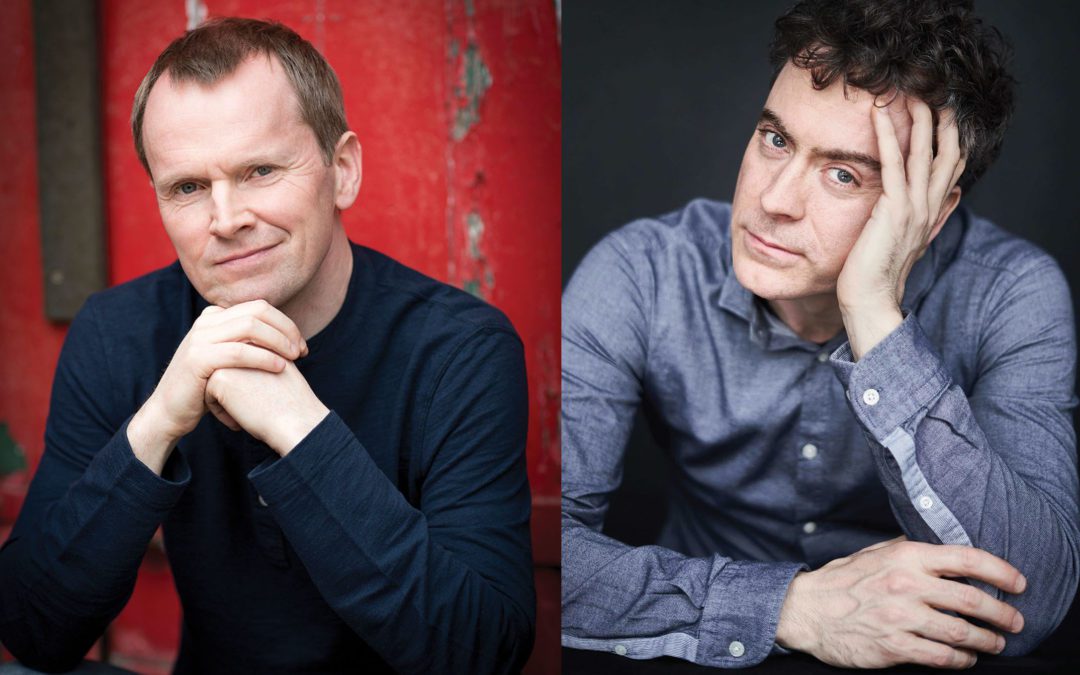 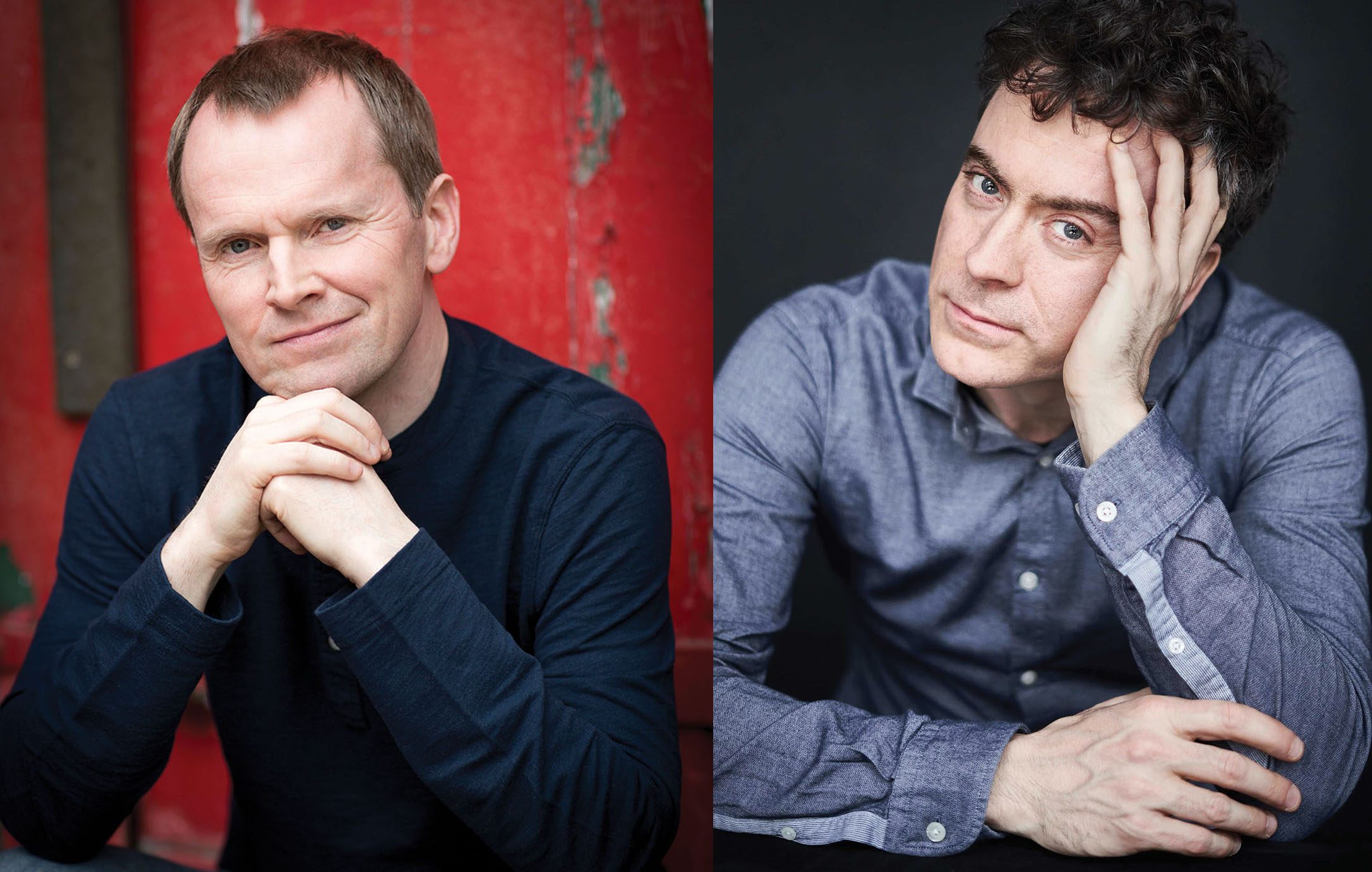 The Middlebury College Performing Arts Series will host pianist Paul Lewis’ 22nd appearance at the Mahaney Arts Center, on Wednesday, Feb. 19, at 7:30 p.m. For this special concert, Lewis will be joined in Robison Hall by internationally acclaimed pianist Steven Osborne, who has also won audience hearts in three previous Middlebury recitals.
In this tour-de-force collaborative concert — one of only three U.S. stops on their international duet tour — Lewis and Osborne unite at the keyboard for a four-hand piano program of Fauré’s “Dolly Suite,” Poulenc’s “Sonata for Piano Duet” Debussy’s “Six Épigraphes Antiques and Petite Suite,” Stravinsky’s “Trois Pièces Faciles” and Ravel’s “Mother Goose Suite.”
Lewis is internationally regarded as one of the leading musicians of his generation. His numerous awards have included the Royal Philharmonic Society’s Instrumentalist of the Year, two Edison awards, and three Gramophone awards. Lewis appears regularly as soloist with the world’s great orchestras, and his recital career takes him to major venues across the U.S. and Europe. His multi-award-winning discography includes both solo and orchestral work.
Winner of the Royal Philharmonic Society’s Instrumentalist of the Year in 2013, Osborne is one of Britain’s most treasured musicians. He has held residencies at London’s Wigmore Hall, Antwerp’s deSingel, and other venues and festivals across Europe, and his concerto performances take him to major orchestras all over the world. Osborne’s 28 recordings have accumulated numerous awards in the U.K., France, Germany, and the U.S.
Professor Emeritus and former series director Paul Nelson will offer a pre-concert lecture at 6:15 p.m.
Reserved seating tickets are $30 for the general public; $25 for Middlebury College faculty, staff, alumni, and emeriti; $10 for youth; and $6 for Middlebury College students, and are on sale at 802-443-6433 or middlebury.edu/arts. The Mahaney Arts Center (MAC) is located at 72 Porter Field Road in Middlebury, just off Route 30 south/S. Main Street. Free parking is available curbside on Rt. 30 or in the MAC parking lot.

CHELSEA BERRY RETURNS TO BRANDON MUSIC
Singer-songwriter Chelsea Berry brings her compelling presence and world-class vocals to Brandon Music on Saturday, Feb. 22, at 7:30 p.m.
As a vocalist and performer, she evokes the style of artists such as Cheryl Crow, Eva Cassidy, K.D. Lang and Melissa Etheridge. Singer-songwriter Livingston Taylor calls her vocals “world class” and says of Berry: “A voice of remarkable power and control with a joyous soul. Brave and bright, Chelsea Berry is the real thing.”
A favorite among venue owners up and down the East coast and a firm favorite of Brandon Music audiences, (this return performance to Brandon Music will be her fifth) Berry’s beautiful voice, commanding stage presence and contagiously warm personality has brought her across the U.S. as regular support for Livingston Taylor and others, as well as headliner of her own shows. She has played Boston’s House of Blues, Carnegie Hall in New York City, the Shalin Liu in Rockport, Mass., Eddie’s Attic in Atlanta, World Cafe Live in Philadelphia and more.
Berry was a 2016 Falcon Ridge Folk Festival Emerging Artist and has been a student of American songwriting legends such as Dave Van Ronk, Janis Ian, Susan Werner, and Ellis Paul. Her newest full-length album, “Remedy” will be released in May of this year. Born and raised in Alaska, Berry now makes her home in Gloucester, Mass.
Concert tickets are $20. A pre-concert diner is available for $25. Reservations are required for dinner and recommended for shows. Venue is BYOB. Call 802-247-4295 or e-mail info@brandon-music.net for reservations or for more information. Brandon Music is located at 62 Country Club Road, in Brandon.

“SILO” SCREENED AT VOH
The film “SILO” will have its Vermont and New England premiere with two screenings at the Vergennes Opera House, 120 Main Street (Route 22A) in Vergennes, on Saturday, Feb. 22, at 1 and 7 p.m.
“SILO” is inspired by true events and follows a harrowing day in an American farm town. Disaster strikes when teenager Cody Rose is entrapped in a 50-foot-tall grain elevator. When the corn turns to quicksand, family, neighbors and first responders must put aside their differences to rescue Cody from drowning in the crop that has sustained their community for generations.
The film features a local talent, actor Jeremy Holm, in the character of Frank, a volunteer fire fighter. Holm, who is also the spokesperson for the National Fallen Firefighters Foundation, will be attending both screenings and will facilitate a panel discussion and Q&A after each. Joining Holm at the screenings will be local farmer Steve Kayhart, as well as representatives from local fire and safety organizations.
The screenings are free thanks to the underwriting of Co-operative Insurance Companies with additional support from Agri-Services.
Free tickets may be reserved in advance by visiting VergennesOperaHouse.org. They will also be available at the door. Though both screenings are free, donations will be accepted to benefit the Addison County Firefighter’s Association and the National Fallen Firefighters Foundation.
The Vergennes Opera House is an all-volunteer, non-profit organization located on the second floor of the Vergennes City Hall. For more information visit VergennesOperaHouse.org or on Facebook at VergennesOperaHouse.

CABIN FEVER SERIES IN BRISTOL
The Cabin Fever Series presents Keith Murphy and Yann Falquett in concert at 8 p.m., Saturday, Feb. 22, at the Walkover Gallery, 15 Main Street in Bristol.
Murphy and Falquett, in a new collaboration, create a fresh new sound of open-tuned guitars along with mandolin and mandola for an exciting mix of traditional songs. They are both masters of contemporary traditional guitar, representing the compelling textures, harmonies and rhythms that this instrument has brought to traditional songs and instrumentals since the Celtic music revival in the 1970s. As singers, they bring a rich blend of the Franco and Anglo song traditions.
Falquett comes with a wealth of songs from French Canadian cultural heritage. He is probably best known for his work with the Quebecois trio Genticorum. He also performs in a duo with his wife and cellist, Natalie Haas, alongside fiddlers Alasdair Fraser and Brittany Haas in New World Assembly and as a guest of The Seamus Egan Project.
Murphy is a highly respected traditional singer and brings a song repertoire filled with gems from his native Newfoundland as well as Quebec and his current home, Vermont. He was a founding member of the groundbreaking trio, Nightingale, and is the artistic director of the Brattleboro Music Center’s Northern Roots Festival and music director for the WGBH annual St. Patrick’s Celtic Sojourn.
Tickets are $20 in advance and $25 day of the show. For reservation call 453-3188 ext. 2.

INTERNATIONAL FILM SERIES
The 2019-2020 Hirschfield International Film Series continues on Saturday, Feb. 22, at Middlebury College with the 2019 France/Senegal/Belgium film, “Atlantics,” directed by Mati Diop.
After a group of unpaid construction workers disappears at sea one night in search of a better life abroad, the women they have left behind in Dakar are overwhelmed with a mysterious fever. Winner of the Grand Prix at the 2019 Cannes Film Festival.
The film, in Wolof, French and Arabic with English subtitles, will be shown at 3 and again at 8 p.m. in Dana Auditorium on College Street (Route 125). It’s free. Some of the films in this series may be inappropriate for children.

BLUES JAM IN BRISTOL
Middlebury-based English bluesman Tom Caswell will host a Blues Jam in Bristol at 8 p.m. on Wednesday, Feb. 19, at Hatch 31, located at 31 Main St.
The jam will feature both local and statewide blues musicians and is open to anyone wanting to hear great music. This is a monthly event on the third Wednesday of the month. If you are a musician or singer planning to take part in the jam, there will be a sign-up sheet located near the stage.
Although the music begins at 8 p.m., an earlier arrival is advised. Admission to the jam is free.

MUSIC SERIES AT OCB
As part of the 2020 Music Series at Otter Creek Brewing, Mean Waltons, an acoustic bluegrass duo from the Rutland area, will return for a performance at 5 p.m. on Friday, Feb. 21, in OCB’s pub space.
Otter Creek Pub Space is located at 793 Exchange St. in Middlebury. For more information, call 802-388-0727.