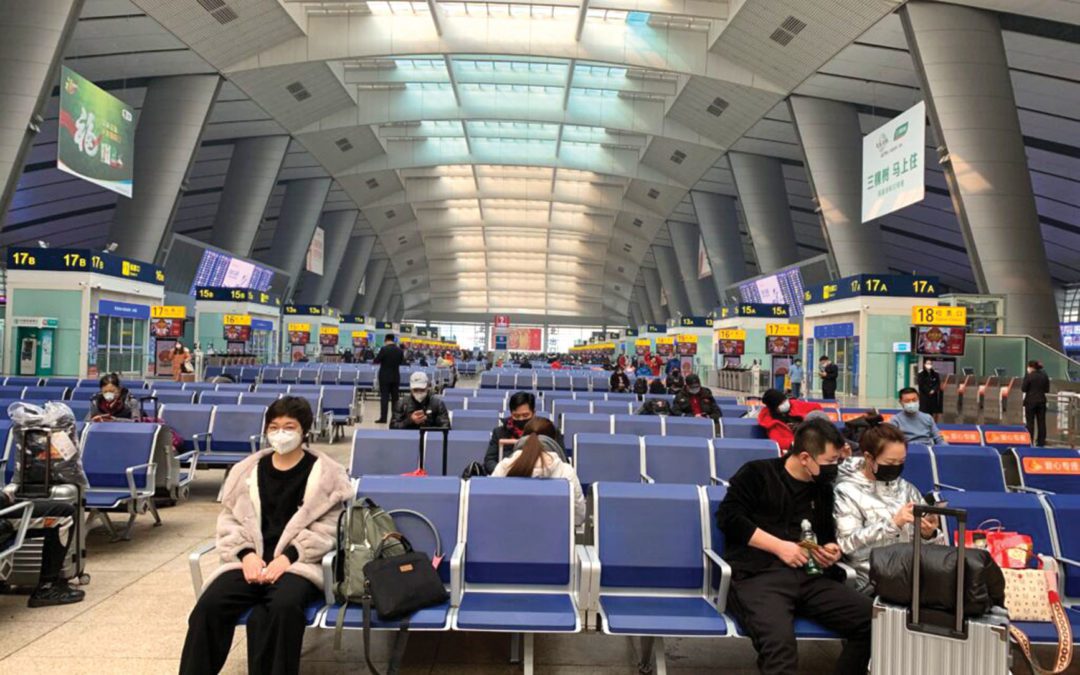 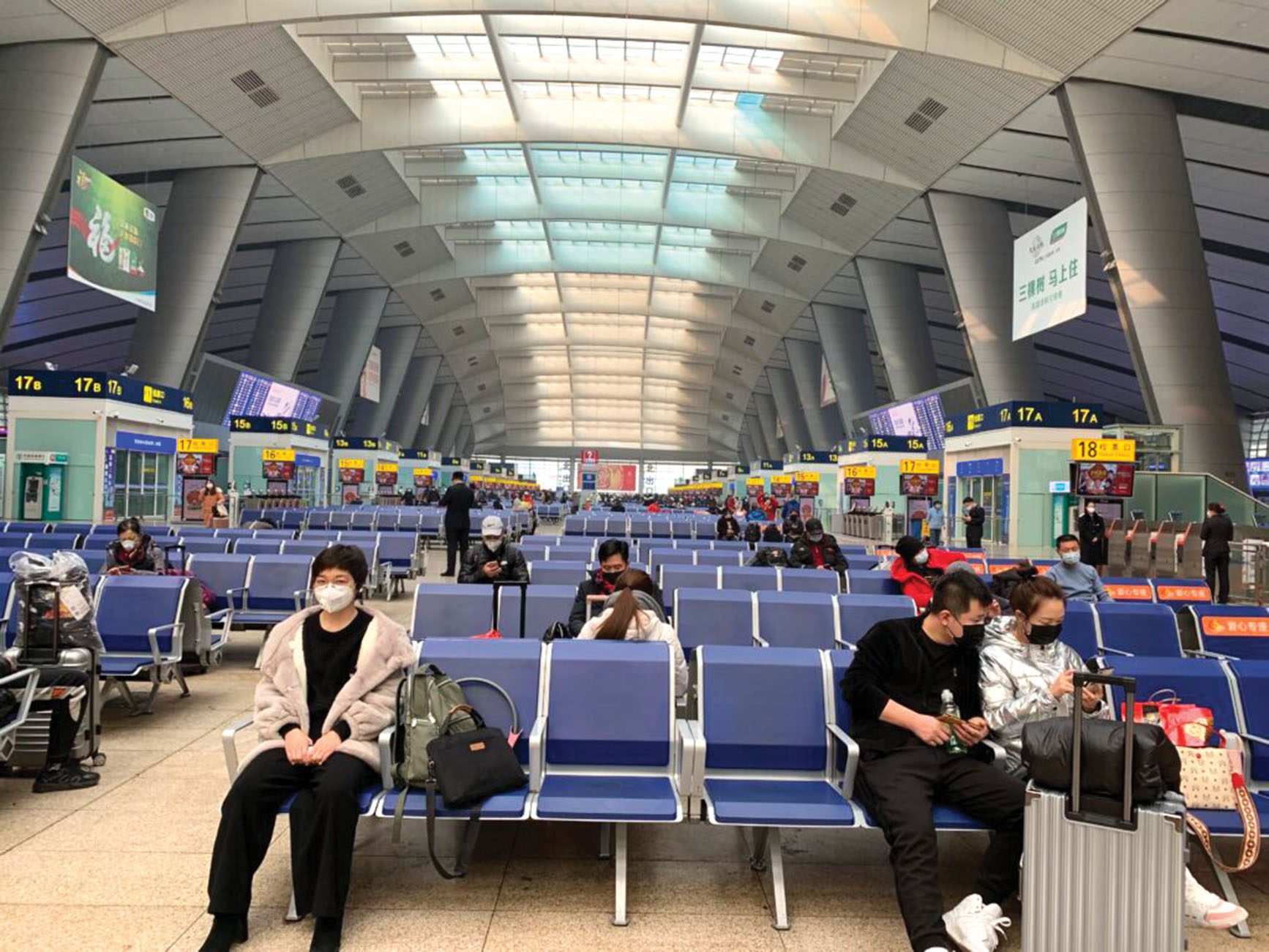 TRAVELERS AT BEIJING Capital International Airport wore facemasks to guard against transmission of a novel coronavirus. The spread of the illness prompted Middlebury College, like many other institutions, to cancel its three programs in China. Photo by Benjy Renton
By John S. McCright

BEIJING, China — Middlebury College junior Benjy Renton may have been a little disappointed after the college cancelled his study abroad program to China this week due to the expanding outbreak of the coronavirus, but he was surely too busy to show it.
An experienced traveler in China, Renton swung into action, helping his fellow students put their affairs in order, book travel to their home countries and evacuate the country where most had planned — some for years in advance — to study for at least the coming few months.
“Our partner for programs in China just cancelled their spring programs and will be getting students out ASAP,” Renton told the Independent in an email on Wednesday (early Thursday morning in China). “We just need them out. It’s now an action movie.”
Like governments, businesses and institutions around the world, Middlebury College this month has been monitoring an outbreak of a respiratory illness caused by a coronavirus named 2019-nCoV. This new coronavirus, which started as an outbreak in Wuhan, China, causes fever, cough and other symptoms and can be deadly.
This situation became increasingly concerning by Tuesday as 106 people in China had died from the disease and more than 4,600 cases had been reported worldwide. With the U.S. government closing its consulate in Wuhan and urging Americans to “avoid nonessential travel” in China, Middlebury College officials pulled the plug on its spring semester programs at three sites in China. At the time Middlebury had 37 students enrolled in its programs in China, 18 of whom came from 14 different U.S. institutions.
“Not only are we taking into consideration the potential health risks, we must also consider the consequences for the academic progress of our students,” wrote Carlos Vélez, dean of International Programs, in a Tuesday email to the college community. “If we move to cancel the programs sooner rather than later, we will be able provide alternatives that will allow them to get full credit for the spring semester. If we wait more than a day or two to make this decision, those options quickly begin to disappear as classes in Middlebury and their home institutions get underway.”
It wasn’t the first action the college took. This past Friday it alerted students to the spread of the coronavirus and offered ways for them to protect themselves.
Renton said that students he was with in China believed that the chance of being infected was rather low.
“Nevertheless, we are taking appropriate precautions by washing our hands and wearing masks,” he wrote.
Around the Capital Normal University, where Middlebury had one of its programs, security officials on Wednesday had begun barricading the campus and all residents must sign in and out (sometimes twice) at what Renton called “Checkpoint Charlie-style” entrances.
“Temperatures are checked randomly as only those with official college business can enter,” Renton wrote on his blog. “Students and faculty must show their student ID card and register with their residence and phone number … Students (leaving campus) will agree to not go to other areas in China to avoid cross infection and will not return to campus until explicitly given notice from Capital Normal University. We were alerted by the front desk staff at our residence that students with temperatures above 37.2º C (99º F) would be turned around at the airport. Each student’s temperature is taken upon their arrival to the airport.
By late on Wednesday, Renton reported 6,095 confirmed cases of the coronavirus in China, with 9,239 suspected cases and 133 deaths.
When the Middlebury students found out their program was cancelled, they were “flustered and shocked,” Renton wrote on a blog. He called a meeting with all Middlebury Schools Abroad students “to discuss repatriation options and ensure that all students would be able to formulate a plan to depart Beijing as swiftly as possible.”
Renton, an East Asia Studies and Geography major at Middlebury, is an old hand at travel in China. He lived in Hong Kong from 2005 to 2010, first visited mainland China in 2006 and has returned 17 times since then.
He said he was busy on Wednesday helping students end their Chinese cell phone contracts and close their Chinese bank accounts. He said three students had left by Wednesday evening and he planned to be one of the last of the Middlebury contingent in country with a departure set for Saturday evening.
On Wednesday Renton reported minimal delays at Beijing Capital International Airport. Officials were checking all travelers’ body temperature. Most airlines had cut back or cancelled flights through Beijing. U.S. carriers American, Delta and United were all waiving change fees to affected customers from China as of Wednesday.
Renton, who works for the Middlebury Campus newspaper and has published many photos in the Independent, himself plans to be back in Middlebury for the spring semester and enrolled in four classes. He anticipates returning to China to work in the summer and is strongly considering enrolling in Middlebury’s China program next fall.
“While not ideal, I would still like the China experience of studying abroad with Middlebury.”
He feels for those students who had planned for this once-in-a-lifetime study abroad experience but had to leave so early.
“I know many other students are disappointed and shocked at this change, since they believed this was their only time to travel to China,” he said. “Study abroad is a key decision in a student’s academic life and many people plan for a few semesters an academic schedule revolving around study abroad (for credit and major compatibility). As I have been here many times before, I know I will be back.”