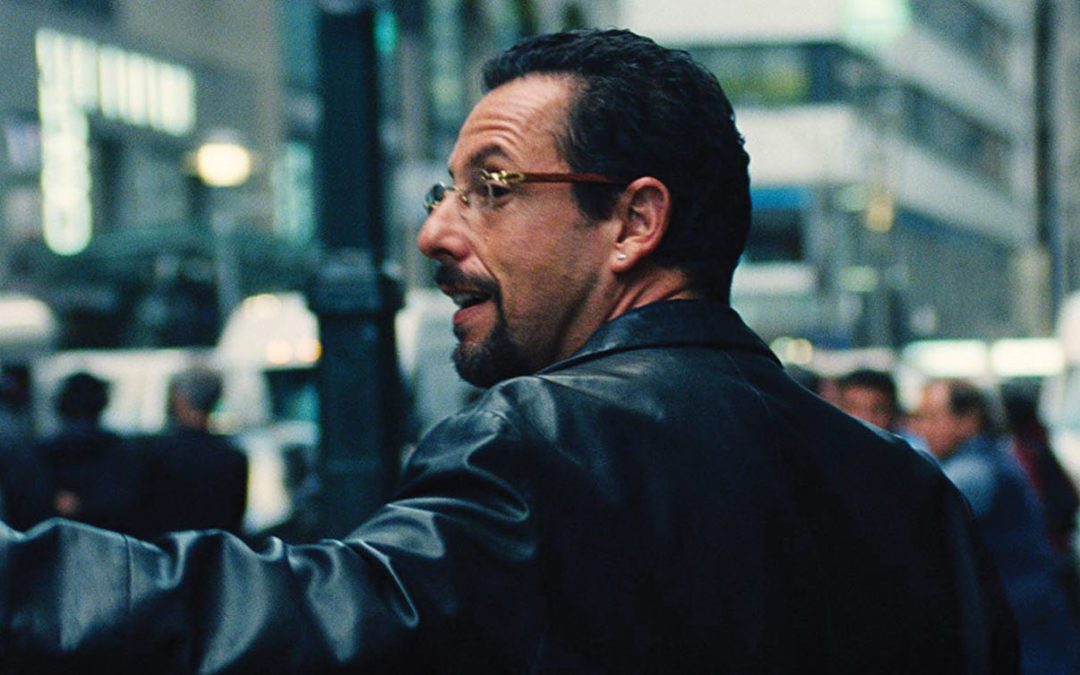 Uncut Gems — Running Time: 2:15 — Rating: R
It is my great pleasure today to write a review of the worst movie I have ever seen. This will be a special challenge because the actors, the directing, and even the premise are all good. Here’s the problem. For the first half hour, we watch Howard Ratner (Adam Sandler) as he runs through streets, buildings and underground tunnels. Yes, the photography is good, and no, we learn little about who he is or what he is doing.
At long last, a box containing rare opals embedded in a rock arrives. From this point forward, that small rock is the trigger for all the action that unfolds. As the movie goes on, impatience becomes the ruling emotion for the audience. What unfolds is a constant battle among various men who want the jewels as they chase each other through underground passages while screaming obscenities.
It’s not an exaggeration to report that the F-word and the S-word are shouted in nearly every sentence that comes from every character. I have no problem with those words, using them in my own impatient moments, but in this movie they drown out all conversation and obliterate the possibility of our learning what the movie is supposed to be about. When I asked audience members afterward how many times those words were shouted, they replied between 200 and 400 times in two and a half hours. It’s the constant screaming of these words that prevents us from understanding who the characters are in relation to each other. All yelled at high pitch, those words overcome the plot.
Then there’s the problem of a hideous string of racial insults that flow through the swearing. We know already that all the men in the plot are selfish, cruel and criminal. What we don’t understand is why there is no counter force at all. Is there one man with a decent motivation? No. One man who isn’t a criminal? No. They are so alike in language and behavior that we can never figure out which men have what intentions.
The material destruction of people and buildings occurs throughout the noise. Who are the good guys? There aren’t any. Are all these men and two women fighting, killing and screaming over that one rock? Yes. If you go because of the host of positive reviews, ask yourself if you can find one speck of decency in the entire movie.
Who to blame? Writers Ronald Bronstein and Josh and Benny Safdie? Directors Benny and Josh Safdie? Actors Adam Sandler, Julia Fox, Idina Menzel and a host of others who create the crowd of villains who yell throughout the movie to create what can only be called a nightmare? Soak up the jewelry store where a lot of this unfolds and you will understand what’s coming in the final scenes.
Over two hours of unrelieved swearing and brutality await you and rumor has it that Adam Sandler will be an Oscar nominee for this role. Ouch.
— Reviewed by Joan Ellis