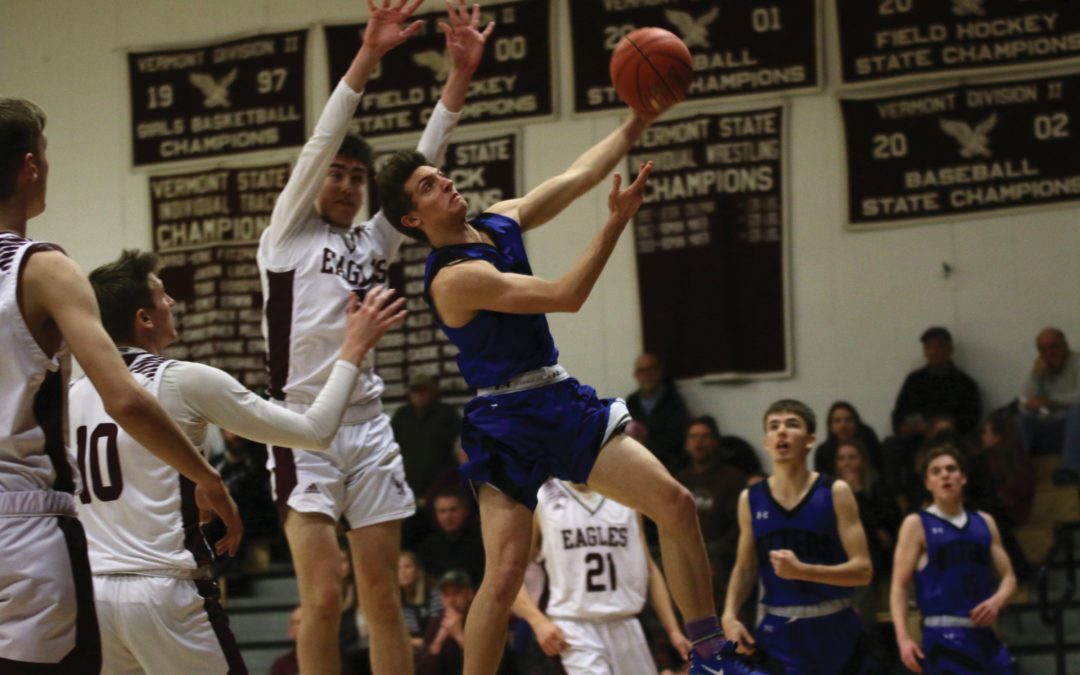 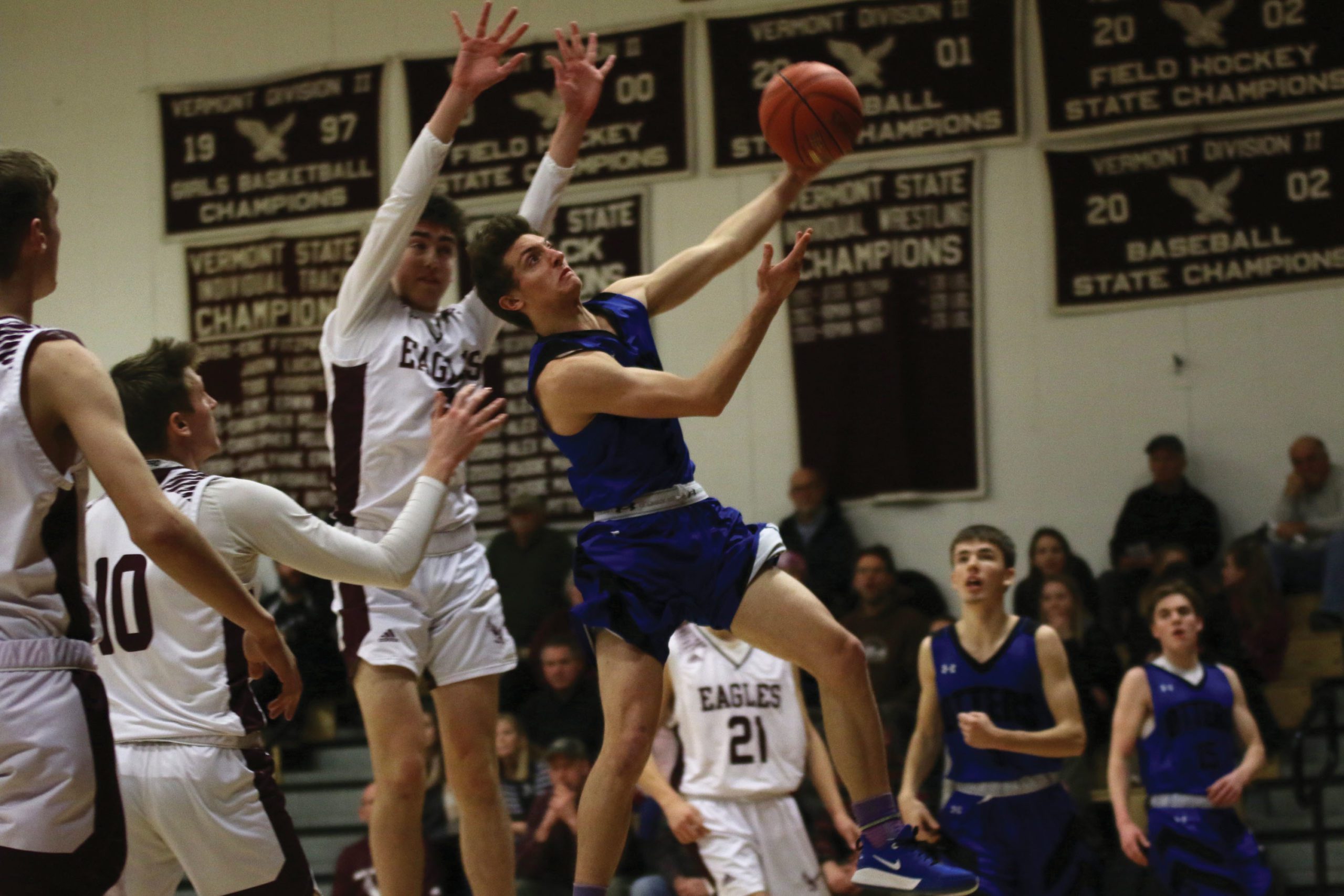 OTTER VALLEY JUNIOR Parker Todd lays in two of his team-high 16 points during Friday’s boys’ basketball game at Mount Abraham. The host Eagles won in dramatic fashion even though the Otters rallied to tie the game in the final minute.
By Andy Kirkaldy

BRISTOL — After watching his young Otter Valley boys’ basketball team lose on Friday at Mount Abraham Union High School, 46-44, on a bucket with 3.2 seconds to go, Coach Mike Stark cited the Eagles’ senior leadership as the difference.
Well, really, Stark was talking about Liam Kelliher, whose 12-foot baseline floater created the final score.
And after the Otters went on a second-quarter run to take a 21-13 lead, it was Kelliher who scored 10 points and set up a hoop by sophomore Henry Cogswell to give the Eagles a 25-21 halftime advantage.
“Kelliher is a ballplayer,” Stark said. “He’s good, he’s long, he’s athletic, and defensively we just couldn’t stop him.”
Eagle Coach Martin Clark said he was pleased to see Kelliher in the spotlight because the senior’s unselfish attitude has helped the Eagles win four straight and improve to 6-4.
“He’s been a real team player this season, and that’s one of the keys to our success,” Clark said. “It hasn’t just been about him. So I’m happy he took over the game in the second quarter and then finished the game at the end.”
Kelliher, who scored a game-high 18 points, shared credit for the winning play. It started with the Eagles inbounding on the right side and moving the ball to Kelliher in the left corner.
“It was really just about getting a good shot. We kind of threw the ball around the top of the key a little bit, and luckily I got the ball at the wing,” he said. “And Griff (junior guard Griffin Paradee) set me a great screen.”
During the game Kelliher and Cogswell (12 points) regularly found a sweet spot along the baseline, combining for five jumpers from either side.
“We compete all the time to see who can hit more baseline shots,” Kelliher said. “It’s the prettiest shot in basketball.”
The Otters (3-6) might argue in favor of the three-pointer. Junior Parker Todd hit four on the way to 16 points, and junior Dylan Gaboriault nailed three while scoring 15.
At the other end, the Otters used 3-2 and 2-3 zone defenses to slow an Eagle offense that had scored 72 points vs. them in a 16-point win on Dec. 20.
“I switched it up because I knew after the first quarter with the 3-2 that they would be looking for something to answer from the outside, so I went to the 2-3 so we could adjust a little bit, and  I think it did work,” Stark said.
Clark praised OV’s defensive tactics and effort.
“Coming out in a zone was key for them. Really the zone slowed us down,” Clark said.
Three Otters hit from behind the arc and five scored in the first period, while the Eagles got four points from Kelliher, four from senior Eric McKean off the bench, and a three from senior Jackson Gepfert.
Then the Eagles went cold in the second, and OV took its eight-point lead on Todd and Gaboriault threes and a jumper from senior Julian Lopez, who came off the bench to score eight points. But all those points came in the first 2:50, and the Eagles’ defense held OV scoreless for the rest of the period.
Kelliher erupted in the final 2:35. He broke the ice with a three, set up Cogswell in transition, hit another three, laid in a loose ball in transition, and drove to make it 25-21 at 0:05.
After the break Otters found their groove to pull within a point after three, 37-36. Gaboriault scored seven in the period, and Todd and Lopez added four apiece. Cogswell (seven) and Kelliher (four) combined for 11 points in the quarter.
OV took the lead, 39-37, when Todd nailed a three at 5:25 of the fourth. Cogswell answered with a three-point play in the paint.  A couple minutes later junior forward Quincy Cook scored on the break after a Gepfert steal to make it 43-39, and at 2:30 Paradee laid in a Kelliher feed, and the Eagles led, 44-39.
The Otters fought back. With two minutes to go, Todd sank another trey, and at 1:12 OV got the ball back. Gaboriault drove and swished a jumper in the lane, and the game was tied at 44-44 at 0:52. Clark twice called for time, the second at 0:12.3 after the Eagles failed to get a good look.
He detailed what he told his team and what happened: “We’ve got time for two passes, right? We’re going to get the ball to Liam. Two passes, cut through the lane, make the defense move some, get the ball to Liam, and hope that he’s got a good opportunity to shoot. And he made a great move on the guy to get the baseline jumper.”
Clark said the Eagles’ execution of the play showed how they are gelling.
“The beginning of season we didn’t have that maturity, understanding what it takes to win,” he said. “And I think we’re getting there.”
Kelliher said the Eagles know more challenges lie ahead, but he agrees the team is coming together.
“The Lake Division is really, really tough,” he said. “But we’re feeling great now. Our chemistry is getting better game by game.”
Stark saw positives for OV, and room for growth.
“We’ve got to learn to keep a lead when we’ve got a lead, and stop a run a little earlier. But they went on their run, and I thought we bounced back,” he said.
Stark expects his young team to continue to work and improve.
“We’ve had three games come down to one possession, and it’s just going to make them that much better,” he said. “I hope that come February we work on these little kinks and we’re working as a team.”