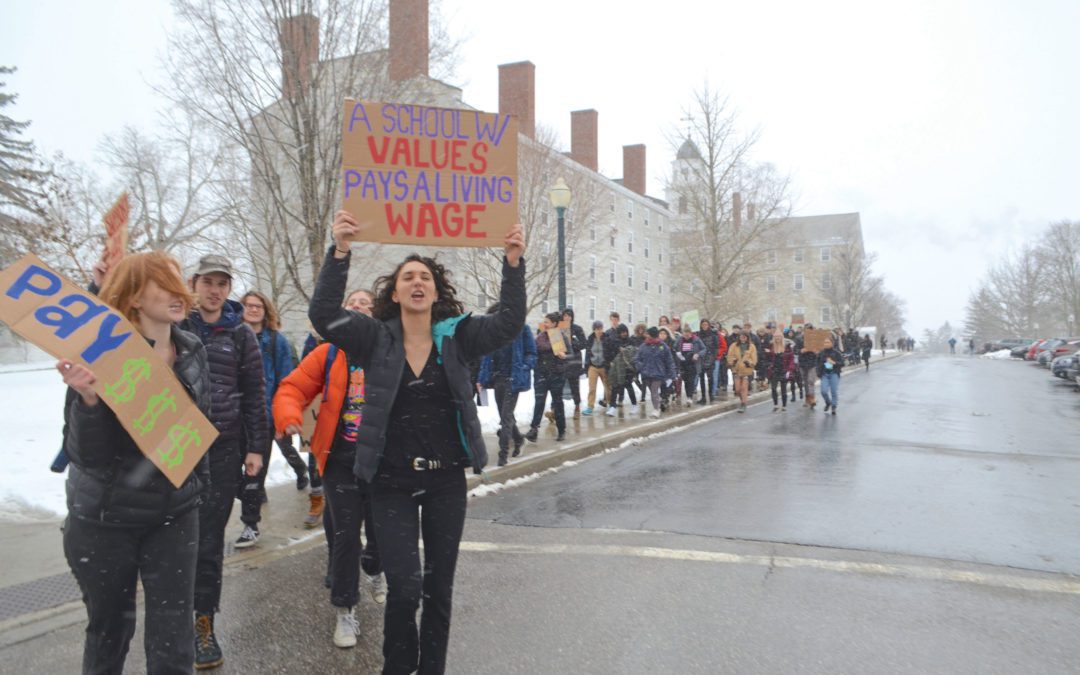 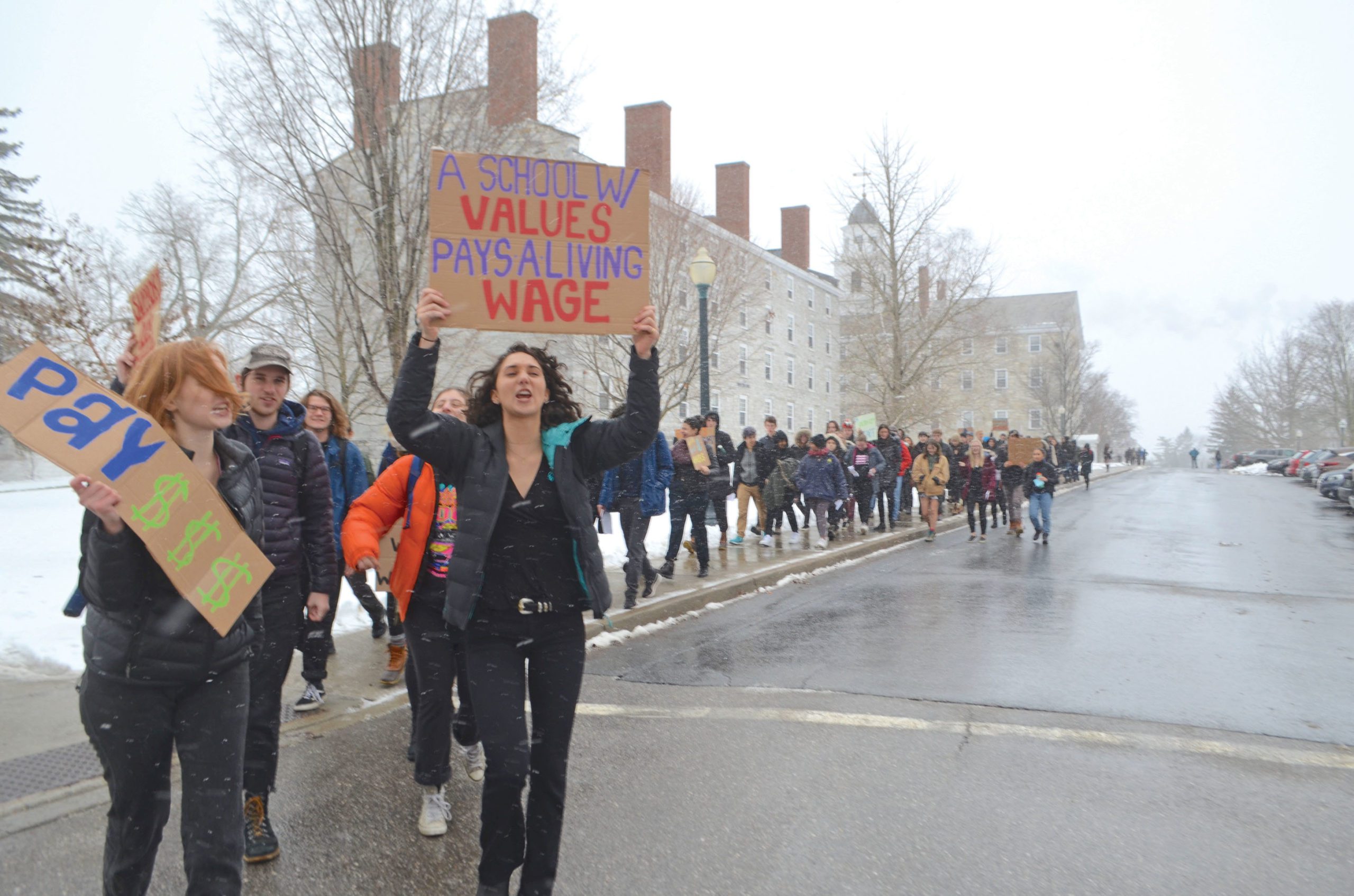 MIDDLEBURY COLLEGE JUNIOR Celia Gottlieb leads several hundred students past Old Chapel in a Dec. 5 protest calling for higher wages for the college’s lowest-paid workers. This week the college said it raised hiring minimum pay by as much as 27%.
By Christopher Ross

This is a reminder that when we rally together as a community we have strength.
— Middlebury junior Celia Gottlieb

MIDDLEBURY — Nearly 80 Middlebury College employees got an automatic wage increase on Dec. 30, after the college determined that compensation for their positions had “fallen behind the market.”
Most of the affected employees work in Facilities Services and Dining Services.
“President (Laurie) Patton remains very committed to paying our staff a competitive wage for the incredible work they do day in and day out, serving our students,” said Executive VP for Finance and Administration David Provost in an email to the Independent. “We are very glad that were able to address this now since it was one of the most important issues Middlebury faced over the last 18 to 24 months.”
Provost and Vice President for Human Resources Karen Miller announced the wage increase in an all-school email Tuesday morning. The Middlebury Campus newspaper broke the news on Twitter a couple of hours later.
Middlebury increased salary-range minimums for benefits-eligible Operations 1, 2 and 3 jobs, which affected slightly more than 6% of the college’s entire Vermont workforce. Those whose salaries fell below the new thresholds received automatic increases.
The lowest-paying positions received the largest increases:
•  The $11 per hour hiring minimum increased by 27% to $14.
•  The $12.07 per hour hiring minimum increased by 24% to $15.
•  The $15.22 per hour hiring minimum increased by 5% to $16.
The shift from $11 to $14 per hour was more than 16 times the increase received by the state’s lowest-paid workers at the beginning of 2020.
On Jan. 1, Vermont’s minimum wage increased by 18 cents (1.7%), from $10.78 per hour to $10.96.

MARKET FORCES
To come up with the new numbers, “we looked at wages for jobs in the area that are the same or similar to those jobs that we had open,” Provost said. “To retain and attract the best staff, Middlebury must keep its compensation competitive.”
He would not say how many Operations 1, 2 and 3 positions at the college are vacant.
The increases followed on the heels of a Dec. 5 campus protest attended by hundreds of students, who demanded what they called a “living wage” for facilities, dining services and other workers.
One of the organizers of that protest, junior Celia Gottlieb, was pleased that the college had taken some action.
“I feel an immense amount of pride for my Middlebury community today,” she told the Independent in an email. “It is because of the sea of faces who came to Mead Chapel on Dec. 5th to protest for higher wages that this shift has been made so readily. This is a reminder that when we rally together as a community we have strength. We must continue to foster this strength to better our community for all.”
Fellow protest organizer Connor Wertz, also a junior, expressed a reserved optimism.
“I applaud the administration for recognizing the need for change and taking steps to address the stark wage disparity for the staff members in our community,” he told the Independent. “But (the increase) is not anything beyond what we expected and doesn’t clearly demonstrate a shift in any of the underlying values that contributed to this problem in the first place.”
Wertz, who at the rally had criticized the administration for using “the market” as a yard stick, added on Tuesday that he hoped the wage increase would be the beginning, not the end, of “a holistic administrative response that will uplift and value our staff members,” and he encouraged the college to work with staff to “institute systemic changes to wages and treatment that will make Middlebury College a leader as an employer, just as it leads in so many other areas of institutional excellence.”
The Independent reached out Tim Parsons, president of Middlebury’s Staff Council, but Parsons did not respond in time for this story.
Provost said the student protest had no direct impact on the decision to adjust these pay rates.  He acknowledged that the administration did hear the demands.
“The student voices as well as the staff and faculty voices over the last six months of clearly stating this as a priority for the institution allowed us to appropriate the financial resources needed, knowing that all other requests for new dollars would be of lower priority,” he said.
In making its wage determinations, the college did not solicit input from staff about the local cost of living, Provost said. But he added that Middlebury is currently conducting a thorough review of staff compensation. If other adjustments are needed, they will be made during the next fiscal year, which begins July 1.
With 1,144 full-time employees and 72 part-time staff, Middlebury College is the largest employer in Addison County.
Over the last couple of years, as part of an ongoing effort to address budgeting challenges, the college undertook a massive reevaluation of its workforce and work processes. In May 2019 college officials announced that the program, called “Workforce Planning,” had been a success. No one was laid off, and administrators predicted that budget deficits would soon be a thing of the past.
Editor’s note: Reporter Christopher Ross is married to an employee of Middlebury College.
Reach Christopher Ross at christopherr@addisonindependent.com.