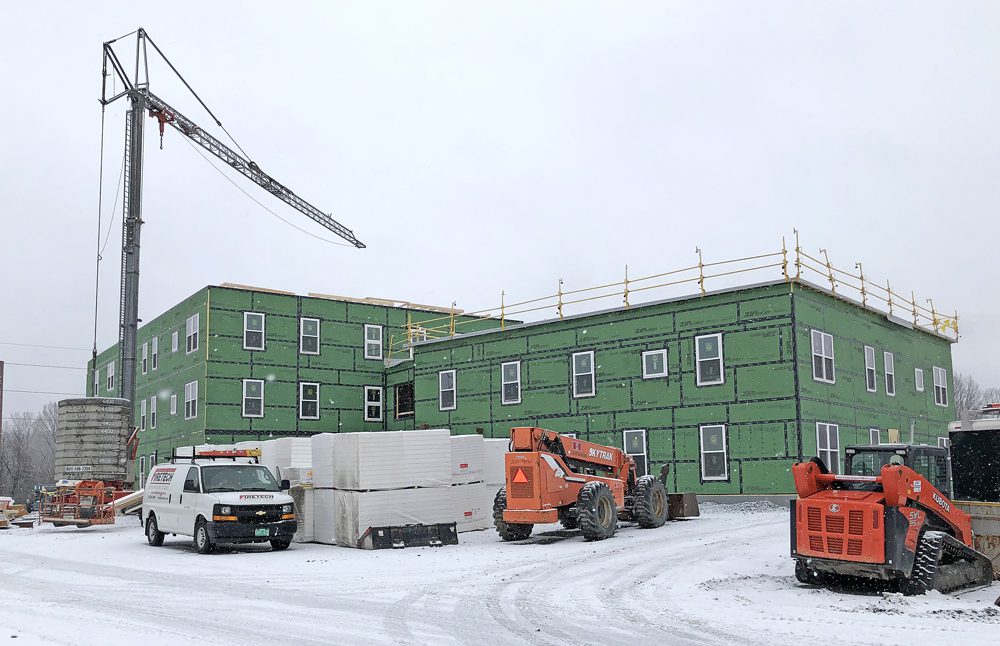 WORKERS ARE BEGINNING to frame in the third story of the affordable housing project under construction on Armory Lane in Vergennes. The 24-unit building, to be completed by late summer, will offer apartments to people with earnings both above and below the county’s median income.
By Andy Kirkaldy

There is a lot of unmet need in Middlebury that we would like to address, and we are starting to explore potential development opportunities that we hope could lead to a new 20- to 30-unit multifamily property in the next few years.
— Elise Shanbacker

VERGENNES — Construction of the affordable-housing project on Armory Lane in Vergennes is going strong, and the Addison County Community Trust (ACCT) next month will start accepting applications for August occupancy of the building’s 14 one-bedroom, nine two-bedroom, and one three-bedroom apartments.
“Currently we are on budget and on schedule for construction completion in July,” said Elise Shanbacker, executive director of ACCT, which will manage the building and is a partner in the project with Housing Vermont.
Seventeen of the building’s 24 units will be reserved for households earning 60% or less of Area Median Income. An ACCT information sheet puts the local median income at $63,960 for a single individual.
Occupants of seven units can earn more than double that median income, allowing ACCT and Housing Vermont to offer affordable market-rate units to working families and people in what is a tight Vergennes rental market — recently ACCT pegged the Vergennes-area rental occupancy rate at approaching 100 percent and lease costs rising accordingly.
“I think one thing that is good to highlight with this project is that it is bringing $1.8 million of Housing Revenue Bond funds to Addison County,” Shanbacker said. “This is allowing ACCT to provide market-rate units affordable to households earning up to 120% of median income, in addition to the lower-income households we have traditionally been able to serve.”
Rents for the apartments will vary depending on tenants’ income levels compared to median income. Those interested in learning more about the project or potentially renting a unit can email ACCT at info@addisontrust.org or call 877-2626.
According to the ACCT information sheet:
• One-bedroom units could rent for $659, $797 or $965, depending on renters’ income.
• Two-bedroom units could go for $780, $946 or $1,175, depending on renters’ income.
• The three-bedroom apartment is listed only for those earning 60% of median income at $ 1,085.

PROJECT DETAILS
Overall, the building will be about 23,500 square feet; it is a three-story structure with a two-story wing. Elevators will serve second- and third-story apartments. Neagley & Chase Construction Co. of South Burlington is serving as general contractor.
The building, designed by Vermont Integrated Architecture to be highly energy efficient, sits across the street from the recently built senior housing project. It is a short walk from the shopping plaza that includes Shaw’s Supermarket and Kinney Drugs. Vergennes Union high and elementary schools also lie within reasonable walking distances.
According to documents filed with the city of Vergennes, the project will include 37 parking spaces, a sidewalk leading to a crosswalk across Armory Lane, porches around the front and rear entrances, and a play area and vegetable garden on the building’s east side.
Construction costs are estimated at about $5.4 million, and total development costs — including land acquisition, design and engineering — and permitting, are expected bring the project total to almost $7.3 million
Funding comes from more than $4 million of equity from a Low-Income Housing Tax Credit awarded by the Vermont Housing Finance Agency, a $400,000 grant from the Vermont Community Development Program, and more than $2 million from the Vermont Housing and Conservation Board.

ACCT LOOKS AHEAD
ACCT currently owns and manages nearly 700 permanently affordable homes in Addison County, including apartment buildings, mobile home parks, and single-family shared-equity homes. The organization is now eyeing a project similar to the Armory Lane building for Middlebury, according to Shanbacker.
“There is a lot of unmet need in Middlebury that we would like to address, and we are starting to explore potential development opportunities that we hope could lead to a new 20- to 30-unit multifamily property in the next few years,” she wrote in an email.
The nonprofit is also making sure it is staying on top of its current inventory, Shanbacker said.
“We are conducting capital needs assessments of our existing properties to determine rehab needs, and based on that information, hope to begin a rehab project in 2021,” she said.
Certainly, Shanbacker said, given the current climate she expects ACCT and other nonprofits in the housing sector to remain busy.
“Unfortunately, community agencies are seeing an uptick in homelessness and are experiencing an exceptionally high strain on diminished resources to meet existing needs, so we know there is much more work to be done,” she said.