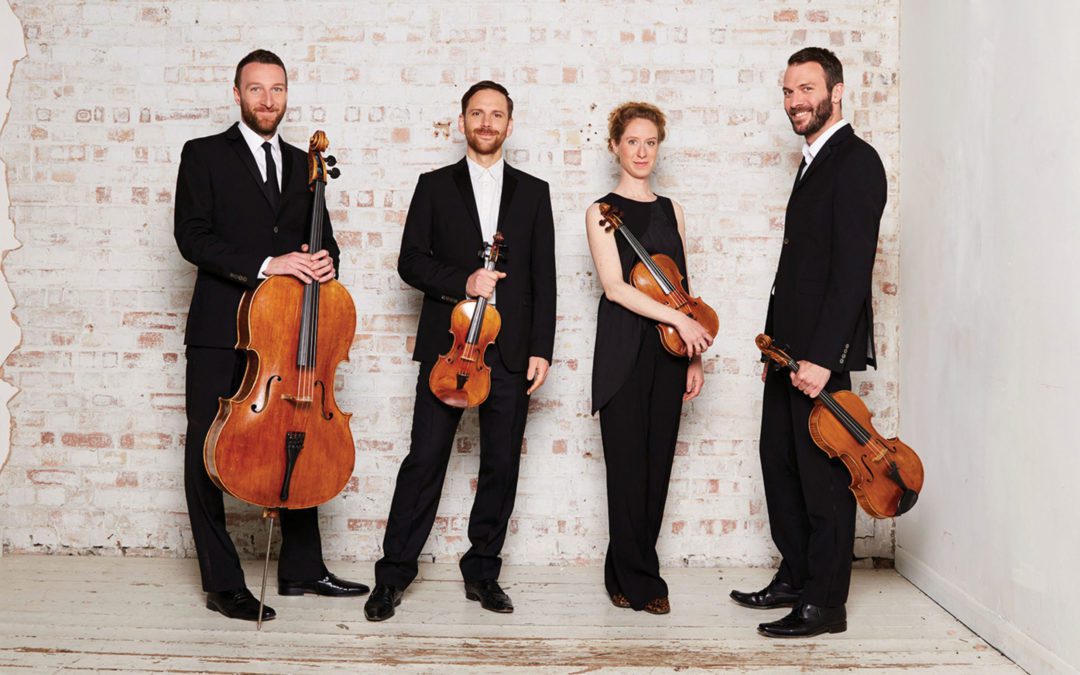 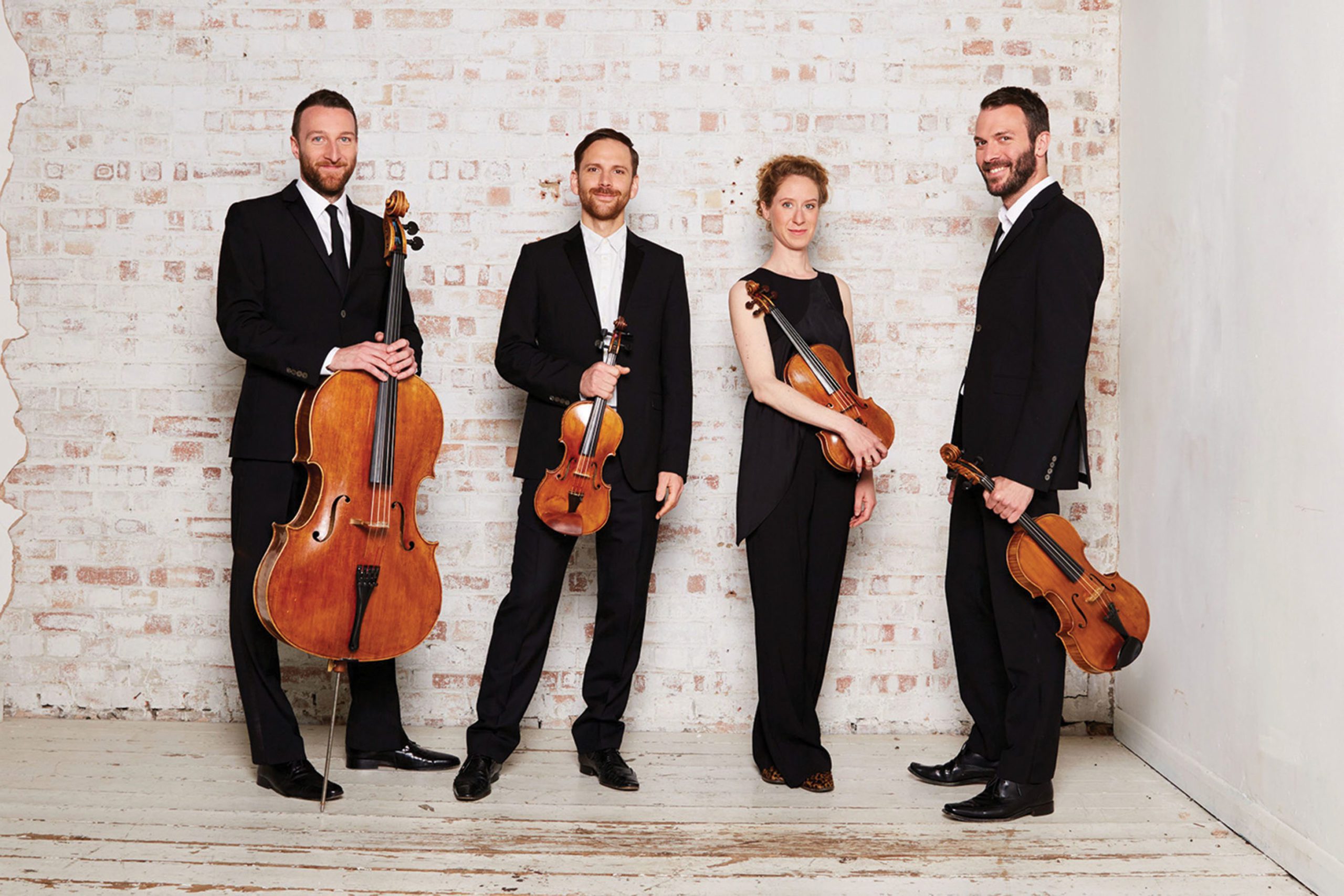 THE HEATH QUARTET returns to Middlebury with two concerts. The first is at 7:30 p.m. on Saturday, Jan. 11, in the Mahaney Arts Center’s Robison Hall. They return on Jan. 17.
By Greg Pahl

MIDDLEBURY — The dynamic and charismatic Heath Quartet is one of the most exciting British chamber ensembles of the moment, steadily building a reputation for their upbeat and integrated sound. In celebration of Beethoven’s 250th birth year, the Heath Quartet is presenting his entire string quartet cycle over the course of six concerts in Middlebury.
Middlebury College’s Performing Arts Series opens the quartet’s second week-long residency of the season with a free concert at 7:30 p.m. on Saturday, Jan. 11, in the Mahaney Arts Center’s Robison Hall. This special New Year treat will feature Beethoven’s first string quartet composition, Quartet No. 3 in D Major, Op. 18; his last; Quartet No. 16 in F Major Op. 135; and the first Razumovsky Quartet No. 7 in F Major, Op. 59.
No tickets are required for this concert, thanks to a generous gift from the Sunderman Family Concert Endowment Fund, in memory of Dr. F. William Sunderman Jr. and Dr. Carolyn Reynolds Sunderman; audience members are encouraged to arrive early for best seating. Music professor Larry Hamberlin will offer a free pre-concert lecture at 6:30 p.m.
Then the Heath Quartet will participate in a full week of master classes and coaching sessions with students on campus and in the community before closing their winter stay with a second concert next week on Friday, Jan. 17.
In May 2013, the Heath Quartet — including violinists Oliver Heath and Sara Wolstenholme, violist Gary Pomeroy, and cellist Christopher Murray — became the first ensemble in 15 years to win the prestigious Royal Philharmonic Society’s Young Artists Award. In 2016 their recording of Sir Michael Tippett’s string quartets received widespread acclaim and won the Gramophone Chamber Disk of the Year. And just this past year, the Heath was included as one of the Top 10 String Quartets in a Gramophone list of “some of the greatest recordings available.”
The Jan. 11 concert is free, and no tickets are required. The Mahaney Center is located on the campus of Middlebury College, at 72 Porter Field Road in Middlebury, just off Route 30 south/S. Main Street. Free parking is available curbside on Rt. 30 or in the Center for the Arts parking lot.

MANDOLINISTS IN LINCOLN
Matt Flinner, Jamie Masefield and Will Patton and will be performing at Burnham Hall, 52 River Rd. in Lincoln, on Saturday, Jan. 11, at 7:30 p.m. The trio brings together three of Vermont’s finest mandolinists for a rare evening of bluegrass, jazz and roots music in the unique (and very happy sounding) setting of three mandolins. Joined by journeyman bassist Pat Melvin, the group performs music of Bill Monroe, Django Reinhardt, J.S. Bach and everything in between, all with the flair of virtuosity and originality.
Grammy-nominated mandolinist Matt Flinner has made a career out of playing acoustic music in new ways. Whether it’s with his own Matt Flinner Trio or with Phillips, Grier and Flinner, the Frank Vignola Quartet, Darrell Scott, Steve Martin, the Ying Quartet, Tim O’Brien, Leftover Salmon or the Modern Mandolin Quartet, Flinner’s style and compositional ability have established him as one of the most accomplished and musically diverse mandolinists in the world. Flinner currently lives in Ripton.
Mandolinist Jamie Masefield began playing on the tenor banjo when he was 11, learning traditional New Orleans Jazz. This continuously influenced his approach to playing the mandolin over the years on his way to becoming one of the most widely-recognized jazz mandolinists in the country. Masefield is perhaps best known for his ground-breaking group, the Jazz Mandolin Project, which toured the U.S. extensively from 1996 to 2006, and helped carve out new territory for the mandolin in jazz while bringing the instrument to wider audiences in both the jazz and jam band scenes. He currently lives in Monkton.
Will Patton has been playing music since the age of six, starting on piano and taking up guitar at age 12. Mandolin and bass soon followed, and he’s been leading bands since he was 13. He studied at Middlebury College and discovered a deep connection with the rural landscape there. His travels have taken him to Rio, Paris and the Caribbean as well as all over the U.S. and Canada, playing rock and roll, folk, bluegrass, Brazilian music and jazz.
The cost for the show is $10 for adults. Teens and kids are free. Refreshments are served during intermission. For more information, phone 802-388-6863.

THE CHRISTINE MALCOLM BAND AT BRANDON MUSIC
Brandon Music launches 2020 with the incredibly talented Christine Malcolm Band on Saturday, Jan. 11, at 7:30 p.m. This highly acclaimed Vermont band will be performing a special blend of rich original country, folk and blues with a high note of rock.
Malcolm is a Northern Vermont songwriter transplanted from balmy Southern Vermont. Her writing is influenced by artists like Lori McKenna, Chris Stapleton and Joni Mitchell. Her 2015 album, “Crickets, Coyotes and the Big Yellow Moon,” won the Times Argus Tammy Award for Best Country Recording of the Year and Seven Days said “Malcolm proves to be a genuine talent.” Her second album, “I Like You,” showcases Malcolm’s vocal dexterity, combining country music and a touch of rock and blues. The album, released in September 2019, is rapidly gathering critical acclaim.
Malcolm is joined by three gifted Vermont musicians — the highly talented Jess Zehngut providing a lovely melodic lead on fiddle, Rudy Dauth, strings player extraordinaire on guitar and Peter Riley, holding it down on bass. Dauth’s guitar and mandolin style ranges from melodic, sweet riffs to ripping, tight leads. Riley is an accomplished, lifetime musician, who has played with more Vermont bands than can be listed here. His bass playing lends groove, depth and musical intelligence.
Tickets are $20 with a pre-concert dinner available for $25. Reservations are required for dinner and recommended for the show. Venue is BYOB. Call 802-247-4295 or e-mail info@brandon-music.net for reservations or for more information. Brandon Music is located at 62 Country Club Road in Brandon.

INTERNATIONAL FILM SERIES
The 2019-2020 Hirschfield International Film Series continues on Saturday, Jan. 11, at Middlebury College, with the 2019 Chinese film “An Elephant Sitting Still,” directed by Bo Hu.
Under the gloomy sky of a small town in northern China, different protagonists’ lives are intertwined in this furious tale of nihilistic rage. While protecting his friend from a dangerous school bully, 16-year-old Wei Bu pushes the tormentor down a staircase. Wei escapes the scene and later learns that the bully is hospitalized and gravely injured.
Wei’s neighbor, the 60-year-old Wang Jin, is estranged from his family and, with nothing to lose, decides to join him. Later the pair is joined by Huang Ling, Wei’s classmate. She is bedeviled by a destructive affair with a married school official. Together, this unlikely and desperate trio, decide their only hope is to flee as the bully’s gangster brother, enraged parents and vindictive school authorities embark on a cold-blooded hunt for Wei across town.
The film won the Berlin International Film Festival FIPRESCI Prize for best first feature. The film, in Mandarin with English subtitles, will be shown at 3 and again at 8 p.m. in Dana Auditorium on College Street (Route 125). It’s free. Some of the films in this series may be inappropriate for children.

MUSIC SERIES AT OCB
As part of the 2020 Music Series at Otter Creek Brewing, Jacob Green will be performing at 5 p.m. on Friday, Jan. 10, in OCB’s pub space. This one man band is stopping by the pub for an unforgettable night.
Green is a blues singer-songwriter who has been described as a modern day rambler, who brings a fresh approach to roots music. He’s a one man band and multi-string instrumentalist, performing on acoustic guitar, dobro, cigar box guitar, banjo and mandolin while simultaneously playing stomp box and foot tambourine for percussion and harmonica for lead. Originally from Wisconsin, Green has toured in 40 states in the U.S., averaging 140 shows a year, and now resides in the Green Mountain State.
Otter Creek Pub Space is located at 793 Exchange Street in Middlebury. For more information, call 802-388-0727.

BLUES JAM IN BRANDON
The monthly (second Saturday of the month) Blues Jam, hosted by Tom Caswell at Sister Wicked, 3 West Seminary Street in Brandon, will take place at 8 p.m. on Saturday, January 11. A signup sheet for musicians is available. Singers, guitarists, bassists, drummers, keyboardists, harmonica players; everyone is welcome to come and play the blues. Nothing but the blues from 8 until late. For more information, call 802-236-3368.