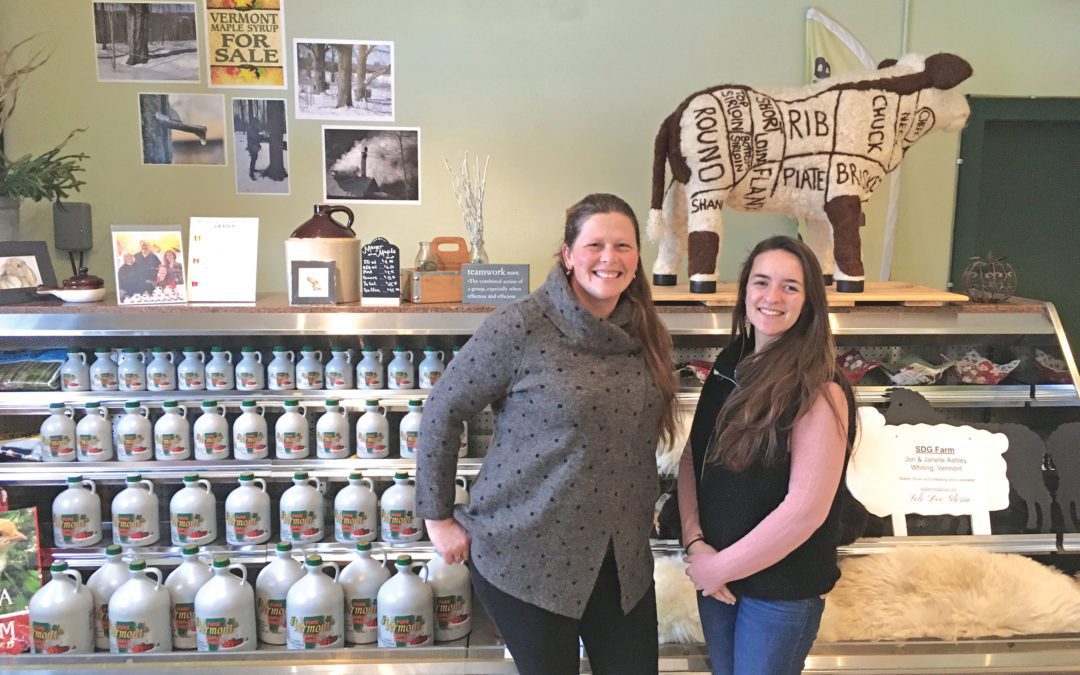 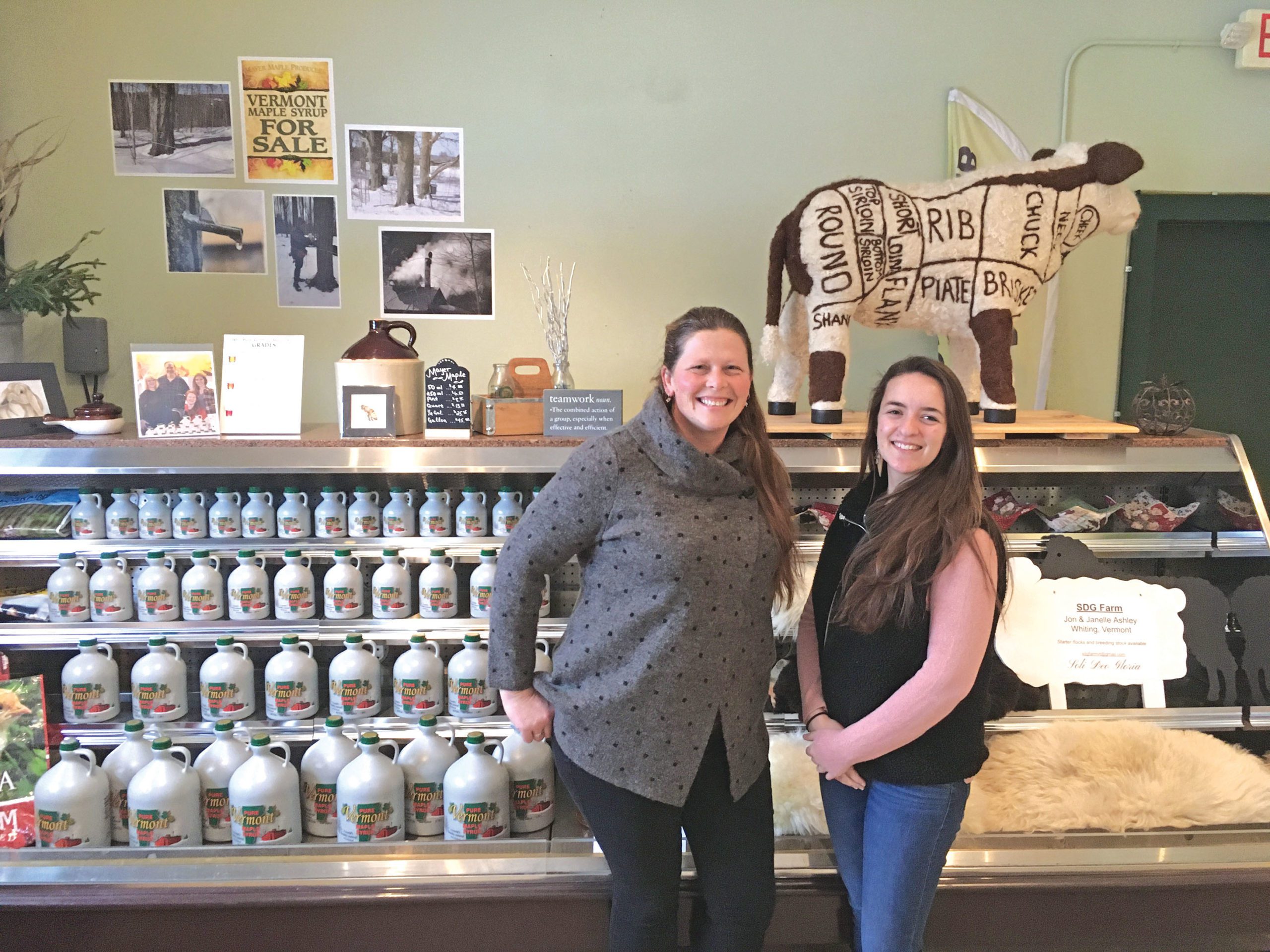 JENNIFER KENNETT, LEFT, and AnnaJo Smith have partnered to open the Vermont Food Collaborative at the corner of Route 7 and Campground Road in New Haven. In addition to offering local food and other products in their retail space, the pair hopes to strengthen relationships among local food producers, processors and buyers.
By Christopher Ross

It’s about weaving food and community back together, and getting back to the roots of local food production.
— Jennifer Kennett

NEW HAVEN — About a year and a half ago a pair of self-described “farmHERs,” Jennifer Kennett and AnnaJo Smith, were worrying about their future as food producers in Addison County.
Now they’re doing something about it.
On Nov. 30 Kennett and Smith opened the Vermont Food Collaborative at 16 Campground Road, just off Route 7, in New Haven — the former home of Green Pasture Meats.
Their mission is to market Vermont-raised livestock, foods and goods; educate the community; and work with producers, butchers and educators to provide a full-circle program of farm-to-plate training for the next generation.
“It’s about weaving food and community back together, and getting back to the roots of local food production,” said Kennett, who also co-owns and operates Tail Feather Farm off Route 7 North in Middlebury.
The Vermont Food Collaborative space will feature both food products — meats, cheeses, produce and other items — as well as non-food items such as sheepskin, cutting boards and, as of Dec. 6, cowboy boots.
Kennett and Smith had originally considered taking over a local slaughterhouse and trying to build a farm co-op, but eventually they decided to pursue the idea of a “food hub” instead, they said.
Vermont Food Collaborative, or VFC, will work with Vermont Livestock Slaughter & Processing Co. in Ferrisburgh to further develop a wholesale market for local meat.
A stronger wholesale market means steadier, more predictable business, said Smith, who with her grandfather Harvey Smith operates Smith Family Farm in New Haven.
“Processors are really busy in the fall and winter, to avoid overwintering animals, but then everything tapers off in the spring. This would allow more steady processing throughout the year.”
Kennett and Smith see education as a key component to their enterprise.
“It’s important for everyone in the cycle — producers, wholesale buyers, consumers of all ages,” Smith said. “We need to need to teach younger kids about food and we need to help adults understand what they’re buying for their families.”
VFC plans to host workshops — or to invite community members to host workshops — onsite.
But, they stressed, education goes both ways.
“We want people to tell us what they want to see and what’s important to them when they’re buying food,” Smith said.
They also stressed that this is a collaborative and not a co-operative.
“This is a collaboration with collaborating members,” Kennett said.
Producers can buy a membership or rent shelf space in the VFC retail shop.
“We’re only covering the cost of the lease and the lights right now,” Kennett explained. “We’re not drawing a salary for ourselves.”
VFC will also be sub-leasing its onsite processing facility to Otter Creek Custom Meat Processing, which is co-owned and operated by Juan de la Cruz, formerly of Green Pasture Meats.
“Our goal someday is to add a butcher shop with fresh product,” Kennett said. “But we need to get a meat-handler’s license first. That’s more of a summer goal right now.”

A BIT OF LUCK
Though these farmHERs (and now entrepreneuHERs) were brainstorming ideas last year, things didn’t come together for the Vermont Food Collaborative until very recently.
They had been in the middle of looking for a location when the Addison County Economic Development Corporation connected them with Alex Layn, who owns property to the north of 16 Campground Road and was considering buying the former site of Green Pasture Meats.
“Before Alex we had plans but had not yet discovered a way to execute them,” Smith said.
They had their first meeting with him on Oct. 21. Later that week, Layn purchased the property and equipment at an auction.
His new tenants opened Vermont Food Collaborative 36 days later.
“It was basically 36 days without sleep,” Kennett said, laughing.
Further complicating the issue was the fact that the partners couldn’t get into the space until the sale was finalized on Nov. 27 — three days before their soft opening.
“Usually you approach something like this step by step,” Smith said. “But all of our steps overlapped: permitting, inspections, working with producers, cleaning, organizing.”
But so far, they said, it’s been great and interest is growing.
“The retail has been wonderful,” Kennett said. “The wholesale will probably tip it in the right direction because it will create a consistent market.”
In the meantime, they’ll grow as they learn and learn as they grow.
“We have lots of ideas about how to branch out,” Smith said. “We just need to find the right fit for us, for distributors and for the community.”
For more information about the Vermont Food Collaborative, visit vermontfoodcollaborative.com.
Reach Christopher Ross at christopherr@addisonindependent.com.