Arts Beat: A little bit of Broadway in Vergennes 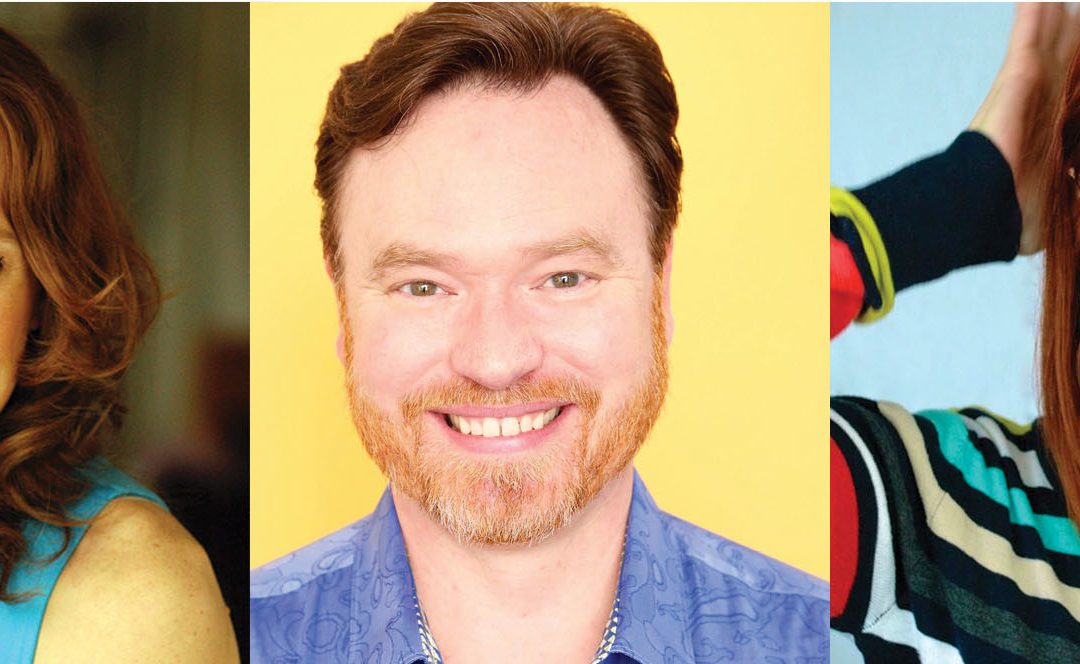 Arts Beat: A little bit of Broadway in Vergennes

For the 14th year, Bill Carmichael, (known to us as Bill Walsh) is pulling together the annual Broadway Direct show at the Vergennes Opera House. The production will take place on Friday, Dec. 6, at 7:30 p.m., with the doors, and the cash bar, opening at 6:45 p.m. for general seating.
This year, Carmichael, a Broadway professional actor who has called Vergennes home for more than 15 years, has called on the talents of Elisa Van Duyne, Richard Koons, and returning favorite Amanda Ryan Paige to join him on stage. The entire company will once again be supported by the expert skills of pianist Scott Nicholas.
“We are all set for another fantastic show this year,” Carmichael says. “Jerry Herman’s music is so well-loved, and our cast is ready to bring their best to the Vergennes Opera House.”
As in years past, several local high school students will be joining the pros on stage. The students are Addie Brooks from Vergennes Union, Anneka Shepherd from Essex High, and Hanlan Paquin from South Burlington.
The night’s performance will focus on the music of Jerry Herman. The group will be performing songs from “Mame,” “Hello Dolly,” and “La Cage Aux Folles,” to name a few.
“This show, hands down, is an audience favorite each year. It is a great pick-me-up after Thanksgiving and a great warm up for the holidays around the corner,” says Gerianne Smart, President of the Friends of the Vergennes Opera House. “How they pull this together with less than two days rehearsal together is a theatrical feat and so very enjoyable to witness.”
The entire show, students included, will also be performing a matinee at 2 p.m., and an evening performance the next day at 7:30 p.m., on Saturday, Dec. 7, in Saint Michael’s Playhouse. This gives the students an incredible opportunity to perform with professional singers/actors on an equity stage. It also gives the Saint Michael’s Playhouse crowd a taste of some terrific musical performances. Call 802-654-2281 for Saint Michael’s ticket information.
Tickets for the VOH performance are available online in advance via the Vergennes Opera House website (vergennesoperahouse.org) and are $15 for adults and seniors (65 and over) and $5 for students 18 and younger. Tickets will also be available at the door, if not sold out. The Vergennes Opera House is located at 120 Main Street (Route 22A), in Vergennes. For more information visit the Vergennes Opera House website or call 802-877-6737.

MARK TOLSTRUP BAND AT RIPTON COFFEE HOUSE
The Ripton Community Coffee House welcomes the Mark Tolstrup Band at the Ripton Community House on Saturday, Dec. 7, at 7:30 p.m.
Tolstrup plays traditional and original songs that meld blues, folk, ragtime and jazz, but sticks closest and most authentically to the sounds of the Mississippi Delta blues. His slide guitar and unaffected raw real vocal sound show him to be the genuine article. He has assembled a talented group of musical cohorts at the crossroads where Dixieland Jazz meets Delta Blues.
At this performance he will be joined by Jill Burnham on vocal, Woody Strobeck on trombone, Frank Orsini on fiddle and Tony Markellis on bass. Together they produce a sound from the roots of American music, moaning low with the blues and rollicking with the joy of traditional jazz of New Orleans.
Tolstrup and his band mate Jill Burnham were also recent winners of the Regional International Blues Challenge held at Caffe Lena in Saratoga Springs, N.Y. They will travel to Memphis in January 2020 to compete in the upcoming Blues Challenge competition.
“An acoustic blues master with a genuine feel for the classic works of such blues legends as Robert Johnson, Son House and Leadbelly, Tolstrup slides and slashes up and down the neck of his National Steel guitar as effortlessly as if he was born with it in his hands,” says Greg Haymes in the Albany Times Union.
The doors for this concert open at 7 p.m. Refreshments will benefit the Friends of the Ripton Church. Call ahead for a slot on the open mic list.
Admission $15 generous admission, $10 general admission, $3 for children. For more information call 388-9782.

SAS CAREY DOCUMENTARY WITH KHONGOROO AT THT
A Sas Carey Documentary film, “Transition,” will screen at Middlebury’s Town Hall Theater on Saturday, Dec. 7, at 8 p.m. There will be a reception preceding the film at 7 p.m.
Follow a young woman doctor as her life shifts from a reindeer herding settlement in the taiga to Mongolia’s capital Ulaanbaatar.
One hundred years ago all Mongolians were nomadic herders. Today only one-third of them are. “Transition” explores that transformation through the lens of one person’s life.
At 27, Khongoroo, a medical doctor, grapples with what it means to remain in the capital of Ulaanbaatar, what is lost and what is gained. She misses the beautiful but remote East Taiga, where two-dozen families live in a tight-knit community. Ulaanbaatar, a city of 1.5 million, has opportunities the countryside does not. Khongoroo must also decide whether to risk the health of her three-year-old daughter in the polluted capital or to send her to her grandmother.
“Transition” was filmed in Mongolia, with an international production team from Poland, New York City, Mongolia, Iceland, and Vermont. Though the movie will not be officially released until next year, Carey shares this pre-release screening with her community, as a way of thanking many here who have helped make it possible.
For 25 years, Carey has documented the traditional life of Mongolian nomadic herders. In 2009, she founded Nomadicare.org, a nonprofit with the mission of supporting and preserving traditional Mongolian nomadic culture through healthcare, films and stories. Now, with her grandson Dune Mayberger recording sound for the latest documentary, she turns to the topic of how lifeways are changing.
General admission tickets are $22 (including fees), and can be purchased at townhalltheater.org, over the phone at 802-382-9222, at the THT box office, Monday-Saturday, noon to 5 p.m. or at the door one hour before show time. Town Hall Theater is located at 68 South Pleasant Street in Middlebury.

ARETHA FRANKLIN BIOGRAPHY AT THT
The Middlebury New Filmmakers Festival Biography Series continues at 2 p.m. on Sunday, Dec. 8, with “Amazing Grace” at Middlebury’s Town Hall Theater.
Witness the power and glory of Aretha Franklin’s stunning voice and delivery in what is considered one of the greatest gospel music performances of all time. Shot over two days in 1972 at the New Temple Missionary Baptist Church in Los Angeles, “Amazing Grace” captured the Queen of Soul at the height of her fame singing the music of her youth.
Focused on rich and rewarding work from singular filmmakers, “The Biography Series: Fabulous Films About Fascinating People,” offers sterling films, both documentary and narrative, that illuminate the lives of complex and significant people whose achievements have touched us in myriad ways.
Tickets are $15, and may be purchased at the THT box office, 68 South Pleasant Street in Middlebury, over the phone at 802-382-9222, Monday-Saturday, noon to 5 p.m., or online at townhalltheater.org.

VERGENNES MISSION CONCERT
The fourth annual Mission Concert at the Vergennes Congregational Church will be held on Sunday, Dec. 8, from 2 to 4 p.m. The concert has traditionally featured a variety of musical styles presented by talented local performers. This year’s lineup follows that tradition; the performers include: Jenny Bower on the church’s historic pipe organ; Molly Tatlock and Ron Mezile performing vocals and piano; Jim Burns on old-time fiddle; Judd Markowski on accordion; Sarah Donnelly and Jenny Bower on vocals and piano; and Honey in the Hive performing Celtic and traditional American music and Irish Step Dance.
Selections by the Green Mountain Horn Club will fill the sanctuary with the rich sound of multiple French horns.
The concert is guaranteed to be lively and entertaining and the reception that follows will feature home baked cookies and other light refreshments. Concert admission is by free-will offering and all are welcome!
Every dollar raised will help people in our community who need assistance to pay for fuel, electricity, medical and dental care, transportation and more throughout the year.

MUSIC SERIES AT OCB
As part of the 2019 Music Series at Otter Creek Brewing, singer/songwriter Duane Carlton will be performing at 5 p.m. on Friday, December 6 in OCB’s pub space.
If you live in the region and like live music you’ve probably heard of guitar player Duane Carleton, or as he is properly named, The Human Jukebox. Carlton was born and raised in the tiny Vermont town of Chippenhook. It doesn’t have a post office or a zip code but it has a great musician. Carlton is a 5th-generation Vermonter. He writes music about people and places he knows of and can identify with. He is one of Killington’s few original artists. He is also one of the few that play true Americana music. There is no money needed for this Jukebox. Just go listen to him play or visit his website (duanecarleton.com) to fall in love with his great music.
Otter Creek Pub Space is located at 793 Exchange Street in Middlebury. For more information, call 802-388-0727.