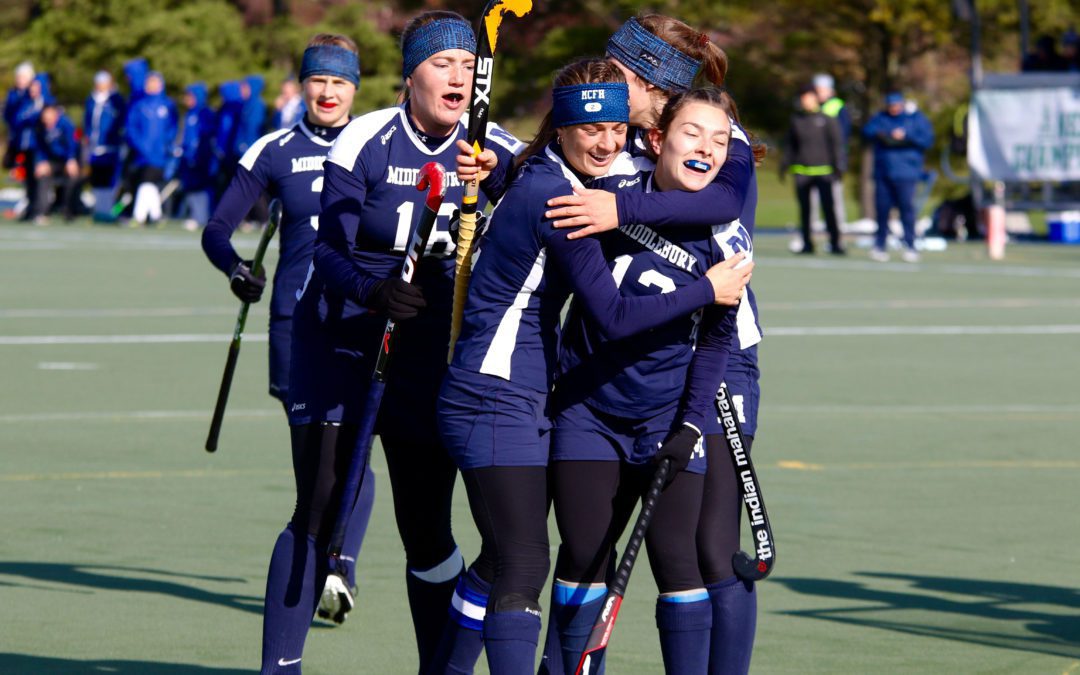 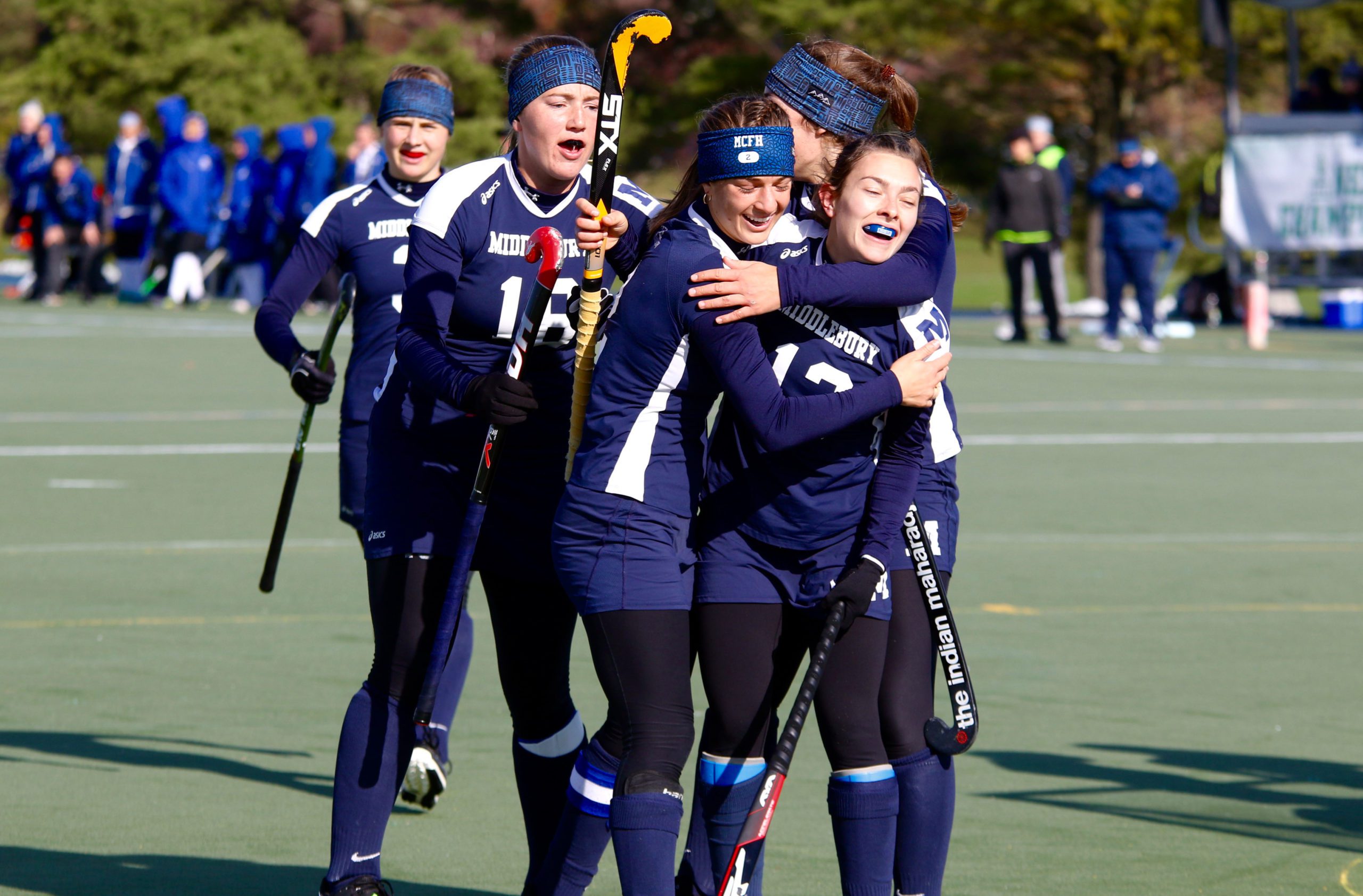 PANTHER TEAMMATES CELEBRATE after Danielle Brown tallies the third Middlebury goal against Hamilton on Saturday in the NESCAC semifinal.
By Andy Kirkaldy

MIDDLEBURY — In Sunday’s NESCAC championship game on its own turf, the Middlebury College field hockey team found itself trailing in the fourth quarter.
The top-seeded Panthers had only trailed twice in the fourth quarter all season, including in their only loss, 1-0 on the road to No. 3 Tufts, their opponent on Sunday.
But the Panthers rallied for the win, getting the tying goal from freshman Katie George — with plenty of help from junior Danielle Brown and seniors Allison Denby and Marissa Baker — and the game-winner from Baker with 3.9 seconds to go in overtime, on a rebound of a shot from senior Emma Johns.
With the clutch overtime victory, Coach Katharine DeLorenzo’s 17-1 team won its third straight NESCAC title and now will aim for its third straight NCAA Division III title — pairings were announced after deadline on Sunday, and the Panthers will be hosting games.
But first they wanted the league title, and DeLorenzo said to earn it the Panthers had to bounce back from uncharacteristic defensive lapses that put them in a 2-1 hole after three periods despite carrying most of the play — they outshot Tufts, 10-4, and earned an 8-4 edge in penalty corners.
“They just knew that had to buckle down because they were behind. I think they were very disappointed in themselves in the breakdown in that first goal,” DeLorenzo said. “And then we got a little carried away with some offensive momentum and didn’t produce enough defensive stops.”
Baker, a co-captain with senior defender Olivia Green, said there was no panic when the Panthers gathered before the fourth quarter to talk about rallying against the 14-4 Jumbos.
“The team never falters. The team knows we have this. We know what we’ve got to do. We just focused. Leading up to that fourth quarter we have that two-minute huddle, and we were saying, play our game, every pass is a connection, every ball is a positive outcome,” Baker said. “Once you get down to those positive outcomes it becomes simpler. And that’s what the team did.”
The Panthers had taken the lead when Johns scored 1:11 into the second period on a crisp penalty corner. The ball came in Baker, moved to the right to junior Erin Nicholas, and then back to the left to Johns, who knocked a 20-footer inside the left post.
Tufts’ Alexis Chauvette knotted the score at 8:39 of the period. Marin Waddington carried the ball to the right end line and served to Chauvette, who, unmarked at the back post, one-timed the cross home.
The Jumbos took the lead 2:13 into the third period, 2-1, when Gillian Roeca was open to tip in Beth Krikorian’s hit from outside the circle. Tufts had at that point scored on both of its shots on goal.
In the final quarter, Middlebury’s tying goal started with Denby breaking up a Tufts clear on the right flank and outmaneuvering two defenders to feed Baker on the near side of the circle. Baker put the first shot on goal and Brown the second before George tucked in the equalizer, 2-2, with 8:29 left in regulation.
Middlebury’s defense — Green, Nicholas, senior Sophia Peluso and junior Meg Fearey all played in the back — held its ground the rest of the way by fending off three Jumbo penalty corners and a two-minute penalty before overtime.
The Panther huddle before the extra session featured more chanting than strategy.
“We were a little more excited at that point. We wanted to win the game,” Baker said.
In OT, Stallman stopped Baker on one of the two corners the Panthers earned, while Claire Foley had one rush into the Panther circle before the Panther game-winner.
Johns took a pass from Nicholas and attacked the center of the circle, drawing a foul but retaining possession. The officials held their whistles because of the Panther advantage, and Johns shot. The ball popped in the air off Jumbo goalie Andie Stallman to her left, and Baker reverse-sticked it in.
“She ripped the shot, and there was a rebound, and the instincts took over. And then I looked and the ball was in the cage. It was an amazing feeling,” Baker said. “Everyone was feeling tired, everyone was gearing up for the second overtime, but we just put one last offensive push down the center of the field, and it worked out in our favor.”
In Saturday’s semifinal the Panthers defeated seventh seed Hamilton, 3-0.
Middlebury took the lead in the first period when Johns scored on a penalty corner, with an assist from Johns, on a similar play to her goal on Sunday. Later in the period Peluso made a save by the left post.
Middlebury broke through again early in the fourth quarter. On a penalty corner Baker picked off a Hamilton clear about 10 yards out and banged the ball into the left side.
George helped set up the next goal 1:26 later with a long rush down the left side that was Hamilton goalie Maggie Reville denied at the post. Reville also stopped Baker’s first rebound bid, but Brown tucked the second rebound inside the right post at 12:05. Panther goalie Grace Harlan made two saves, while Reville made seven for Hamilton (9-8).
Now the Panthers can look forward to defending their NCAA title.
“There is another tournament coming up,” Baker said “It will be hard work and attention to detail. That’s what we say every day.”