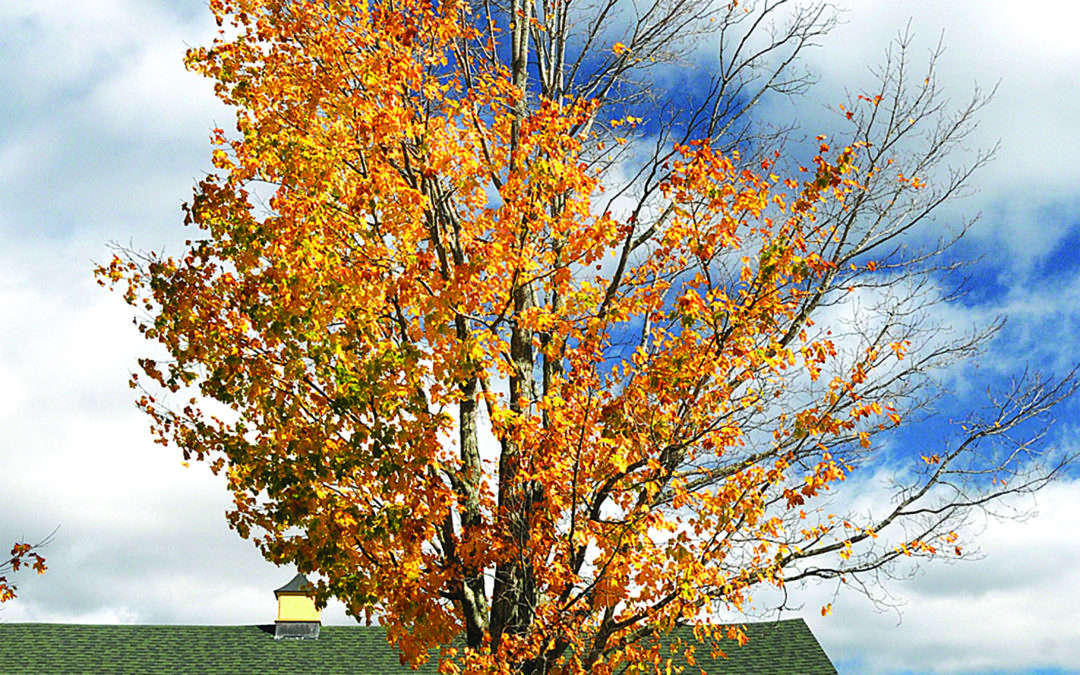 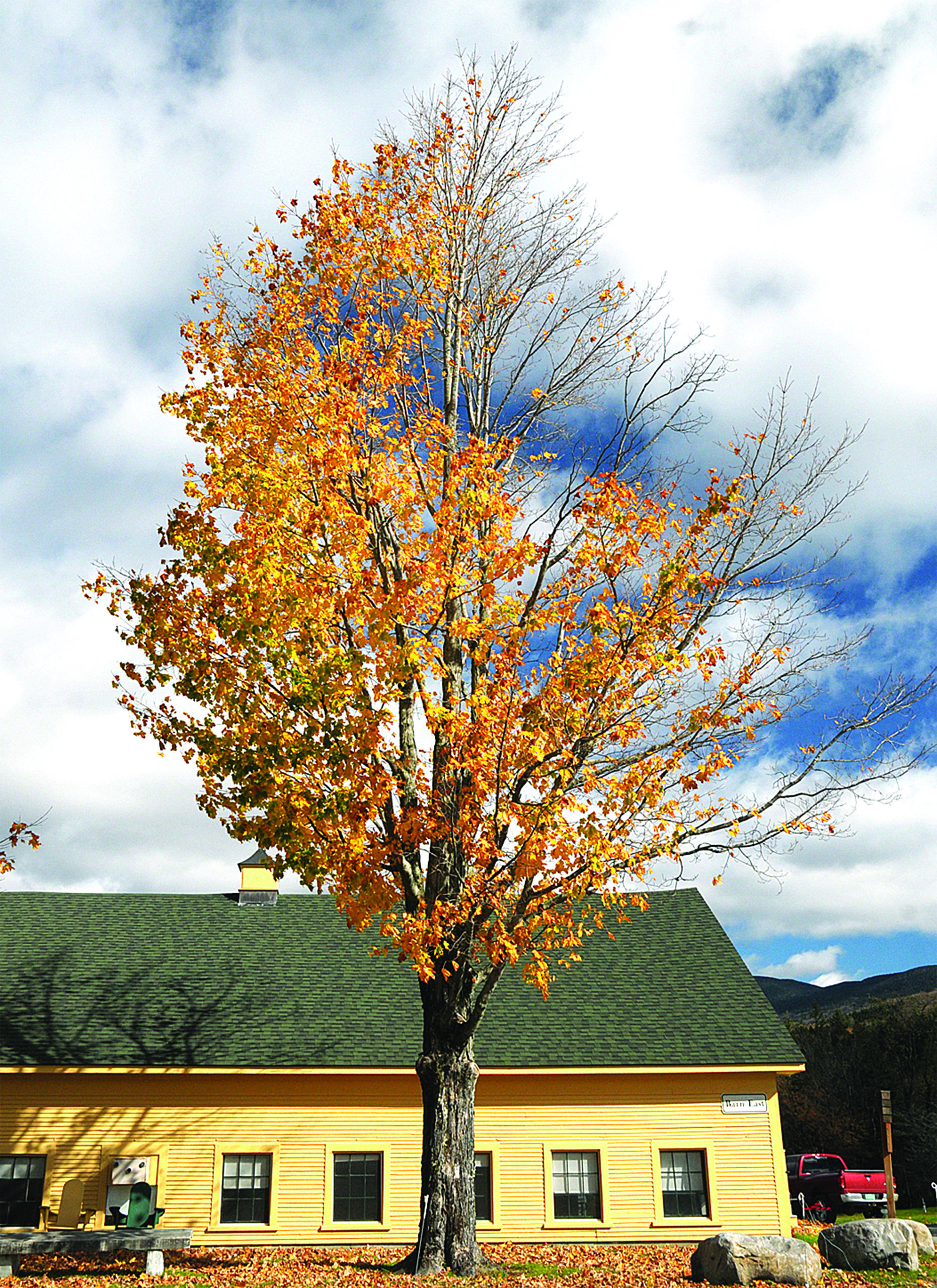 A TREE SHOWS off its colors at the Breadloaf campus in Ripton.

Ripton/Lincoln Tour — 1 Hour:
From Middlebury, travel south on Route 7, then east on Route 125, passing the Waybury Inn. Travel up the mountain, turn left at the Ripton Country Store and follow this road north to Lincoln (take your time, part of this stretch is a dirt road). Lincoln Road turns into Ripton Road. When you get to River Road in Lincoln Village, turn left and head west out of Lincoln down the mountain to Route 17. Travel Route 17 west through the quaint village of Bristol (where you may like to stop for lunch at a variety of dining establishments) and on to Route 7. Turn left on Route 7 traveling south back to Middlebury.

Chimney Point Drive — 2 Hours:
Leaving Middlebury, take Route 125 west to Chimney Point, the site of the beautiful Lake Champlain Bridge, finished in November 2011. A short trip across the bridge to Crown Point in New York will offer great views back to Vermont, and is a great place for a picnic or tour around a major historic landmark. On the Vermont side of the bridge, the Chimney Point State Historic Site at the food of the span is a great place to learn about, well, history. The nearby DAR John Strong Mansion Museum and State Park are also worth a stop if you have the time.
From the Vermont side of the bridge, take Route 17 east to Addison, where you will pick up Route 22A and head north into Vergennes, the smallest city in the United States. Note: Vergennes has some of the most interesting buildings in Victorian architecture. If you have time, get out of your car, wander in the Bixby Memorial Library on Main Street, and gaze up at the glass ceiling in the center of the building.
In Vergennes, take Monkton Road east. Cross Route 7 and continue east to the village of Monkton Ridge. At Monkton Ridge turn right onto Bristol Monkton Road, heading south, and continue to Bristol. In Bristol take Route 17 west to Route 7 and head south on Route 7 back to Middlebury.

Champlain Lookout — 3 Hours:
From Middlebury, take Route 30 (South Main Street) south to Sudbury, where you pick up Route 73 and travel west to Larrabee’s Point on Lake Champlain. You may want to cruise the lake at Mount Independence leaving from Larrabee’s Point, which is home to the Fort Ticonderoga ferry. Continue north on Route 74 passing through historic Shoreham.
Take Route 22A heading north. In Bridport take Route 125 west to Chimney Point on Lake Champlain, where you can admire the Lake Champlain Bridge, which opened in November 2011. Follow Route 17 east. At the West Addison General Store, known locally as WAGS, bear left off Route 17 and onto Jersey Street and continue north along Lake Champlain. Take a left on Button Bay Road and head north, passing beautiful Button Bay State Park, where one might want to stop and picnic, down past the Basin Harbor Resort. A right on Basin Harbor Road toward Vergennes will bring you back to Route 22A (just before the Little City), where you’ll travel south to Addison. Take Route 17 east to Route 23 and Route 23 south through Weybridge and back into Middlebury.

Mad River Valley Tour — 3-4 Hours:
From Middlebury, take Route 7 south to Route 125. Route 125 east through East Middlebury and Ripton, passing the Robert Frost Wayside Recreation Area, the famous Middlebury College Bread Loaf campus, crossing over the Middlebury Gap (elevation 2,149 feet). Proceed down the mountain (also known as the Robert Frost Memorial Drive), into the town of Hancock.
Take Route 100 north through the town of Granville, watching on your left for the beautiful Moss Glen Falls. Continue north into Waitsfield, where you will pick up Route 17, and follow it west over the Appalachian Gap (elevation 2,365 feet). When you get to the bottom of the other side, you’ll take a left and Route 17 and Route 116 will run together for several miles, including through the village of Bristol. Just past the village, Route 116 peels off south but you should stay on Route 17 westbound through New Haven until you come to Route 7. Take Route 7 south back to Middlebury.

Capital City Cruise  — Day Trip:
From Middlebury, take Route 7 south to Route 125, Route 125 east over the mountains to Route 100 in Hancock. Take Route 100 south to Stockbridge, where you pick up Route 107 and drive east to Bethel.
In Bethel take Interstate 89 (known as one of the most beautiful interstates in the country) and head north, passing Vermont’s capital city, Montpelier (population 7,484 — smallest capital city in the country). Get off the interstate at Middlesex (Exit 9) and take Route 100B south to the town of Waitsfield. In Waitsfield, bear right on Route 17 and head west over the Appalachian Gap (elevation 2,365 feet) to Route 7. Follow Route 17 to Route 7 and then take 7 south back to Middlebury.