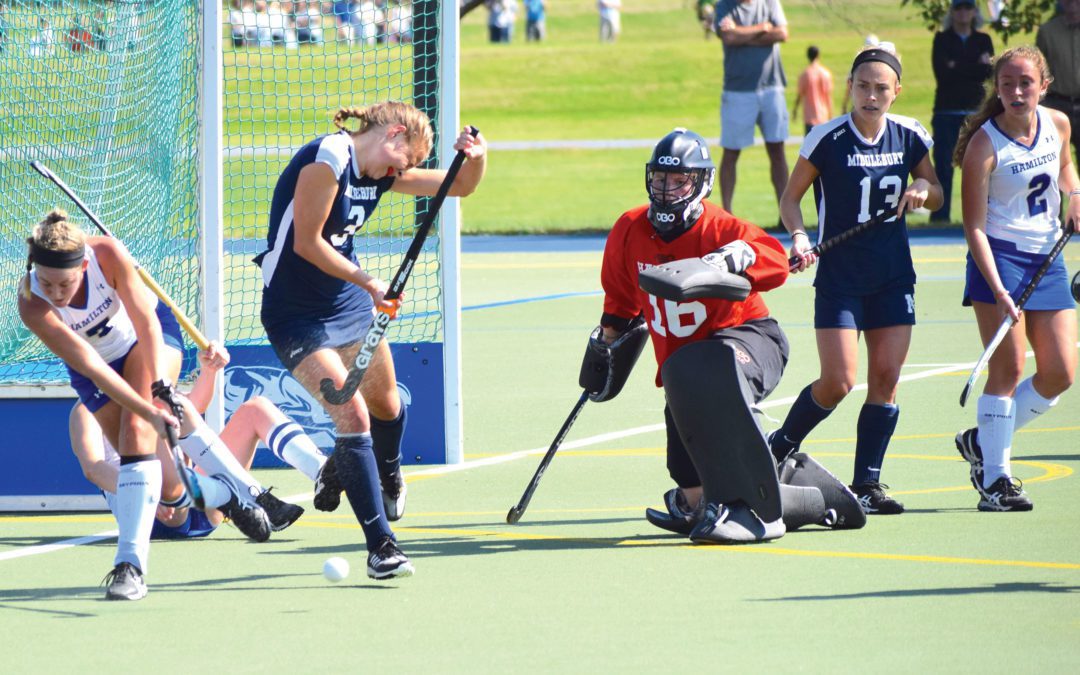 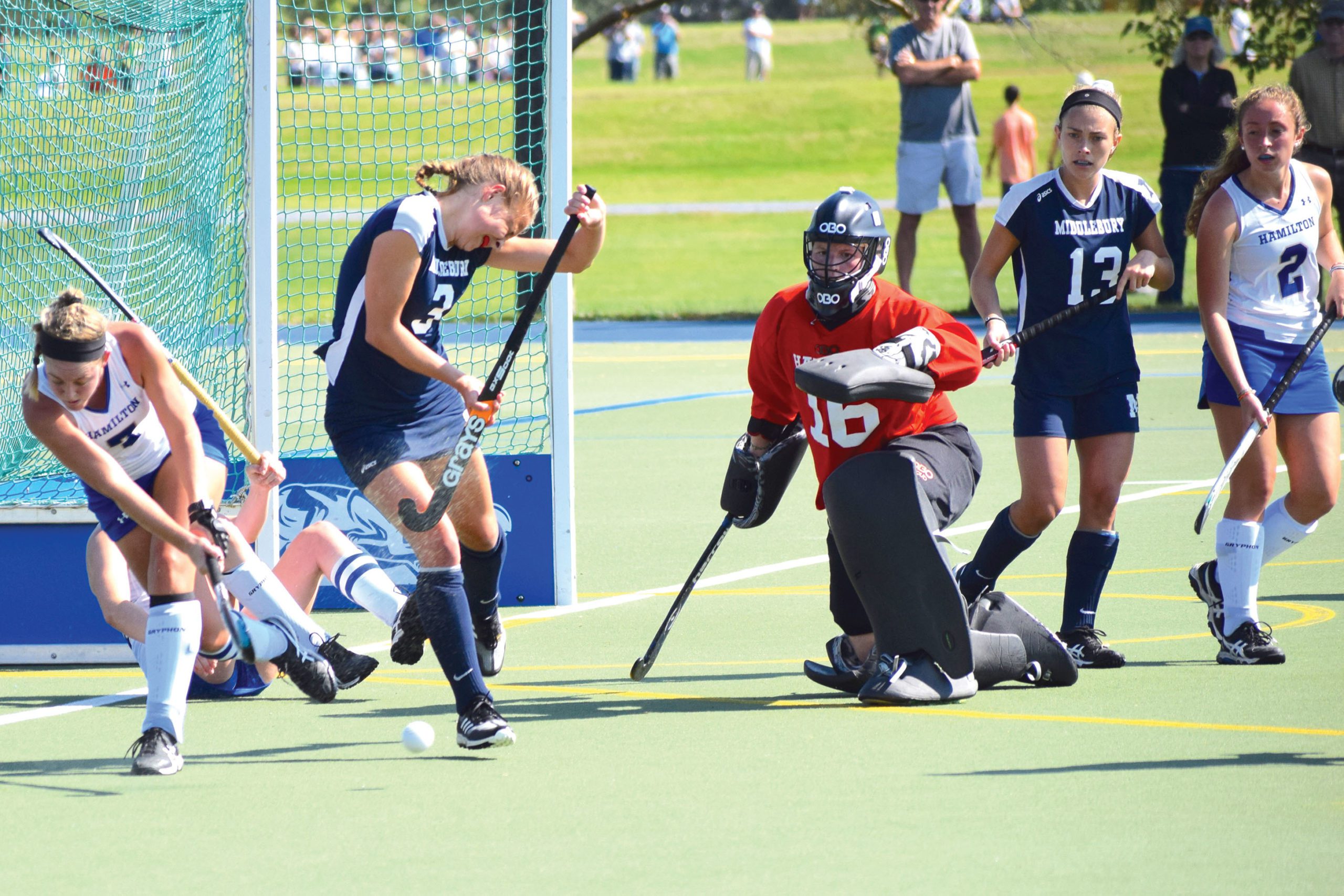 MIDDLEBURY — What do you do for an encore after winning back-to-back NESCAC and NCAA Division III championships?
As of this Tuesday’s dominant 3-0 win over visiting Skidmore, the answer supplied by the No. 1 Middlebury College field hockey team is to get off to a 7-0 start, with two wins against teams ranked in the top 18, while outscoring their opposition by 31-2.
Maybe the better question is how the Panthers keep doing it. After all, the Panthers graduated 2018 final four MVP Grace Jennings, the team’s second-leading scorer a year ago; sixth-leading scorer Molly Freeman; and starting goalie Megan Collins, an NCAA all-tournament team pick a year ago.
For sure, that also means eight starters return. And plenty of talent joined the team: Freshmen Katie George (five goals, two assists) and Audrey Lazar were the team’s leading scorers before reigning NCAA D-III Player of the Year Erin Nicholas improved her season totals to four goals and two assists on Tuesday.
And there was no noticeable drop-off in play on Tuesday when Coach Katharine DeLorenzo went 10-deep into her bench.
DeLorenzo said in part she subbed freely because of her team’s depth and versatility. But she is also experimenting with different combinations and positions, much as she did so a year ago, when she moved Marissa Baker from midfield to forward for the postseason. There, Baker formed a devastating tandem with the All-American Jennings.
“We’re still playing around with almost everything, and I think that’s a really important thing to do at this stage of the season,” DeLorenzo said. “It’s really important for us to make sure we end up with the best that we have in the right spots, not just on the field.”
Baker, a co-captain and one of seven seniors on the team, said other keys to the Panthers’ ongoing success is a short memory and a focus on the daily grind of getting better. She insisted the Panthers “don’t think about the previous season” or who will fill graduates’ shoes.
“We just think about being the best team we can be with the players we do have. So we play to the strengths of the girls on the team right now,” she said. “We just try to play the best field hockey the team can play.”
And the Panthers did so on Tuesday against a 3-5 Skidmore team that adopted a defensive posture and struggled to clear the ball past the aggressive Middlebury midfielders.
“Their greatest excitement was when they were able to keep us from scoring, and they did,” DeLorenzo said.
Even though the Panthers did score early, it took a while for their ball movement to click in the crowded offensive zone. But click it did, especially starting in a crisp second quarter. Even though it was scoreless the ball started flying from Panther stick to Panther stick, and Middlebury started piling up corners with the pressure, finishing with 16-0 advantages in both shots and penalty corners.
“We ended up passing the ball through the back and the middle, and that’s how we ended up getting the ball through the 25 a little bit more and getting it into the circle,” Baker said. “It was a really good game, a really great effort from everyone on the team.”
Nicholas, a junior wing who was a thorn in Skidmore’s side with 11 shots, gave Middlebury the lead 2:26 in. Junior Danielle Brown chipped the ball into the circle, Baker shot at goal, and Nicholas knocked it into the left side.
Middlebury did not score again until 10:42 of the third quarter, when Brown poked in a Nicholas rebound from a goalmouth scramble. Skidmore goalie Jess Gaetgens stopped Brown and Nicholas from point-blank on penalty corners shortly afterward, and a defensive save denied Nicholas when the Panthers earned four straight corners as the period ended.
The final goal came 1:58 in the fourth quarter on a penalty corner. Nicholas sent the ball to senior middie Alison Denby near the penalty stripe, and her reverse sweep found the left side of the cage.
The Panther defense of senior Olivia Green in the middle and senior Sophia Peluso and junior Meg Fearey on the flanks did not allow a shot on sophomore goalie Grace Harlan.
On Saturday the Panthers coasted past visiting NESCAC foe Hamilton, 5-1. The Continentals fell to 2-3.
In that game, senior midfielder Kelly Coyle gave the Panthers the lead with 2:52 left in the first quarter. Baker carried the ball to the end line on the right side and fed Coyle at the goalmouth.
Nicholas made it 2-0 at 7:01 of the second. She moved past several defenders, cut to the middle of the circle and used a backhand sweep to find the cage.
Nicholas added another unassisted goal with 1:14 gone in the third quarter. Hamilton broke through early in the fourth, when Tracey Stafford redirected a long hit. The Panthers added goals from sophomores Grace Murphy and Hannah Sullivan.
Harlan made one save, while Maggie Reville made 10 for the Continentals. The Panthers earned edges of 23-5 in shots and 14-3 in penalty corners.
The Panthers this weekend will host Connecticut (1-4, 0-3 NESCAC) at 11 a.m. on Saturday and visit Amherst (4-2, 1-2) on Sunday.
Baker acknowledged the Panthers have plenty of upside — if they stick to their day-by-day approach.
“The sky’s the limit with the team,” Baker said. “Right now we just focus on the games we have in the upcoming weeks. We just try to play every single game like it’s the hardest game we’re going to play.”
DeLorenzo said she sees evidence that they will.
“Every day when practice ends at seven and dining halls close at eight, they’re still staying 15, 20 minutes after a practice,” she said. “In their mind’s eye, they’re much better in a couple weeks than they are right now.”
Andy Kirkaldy may be reached at andyk@addisonindependent.com.