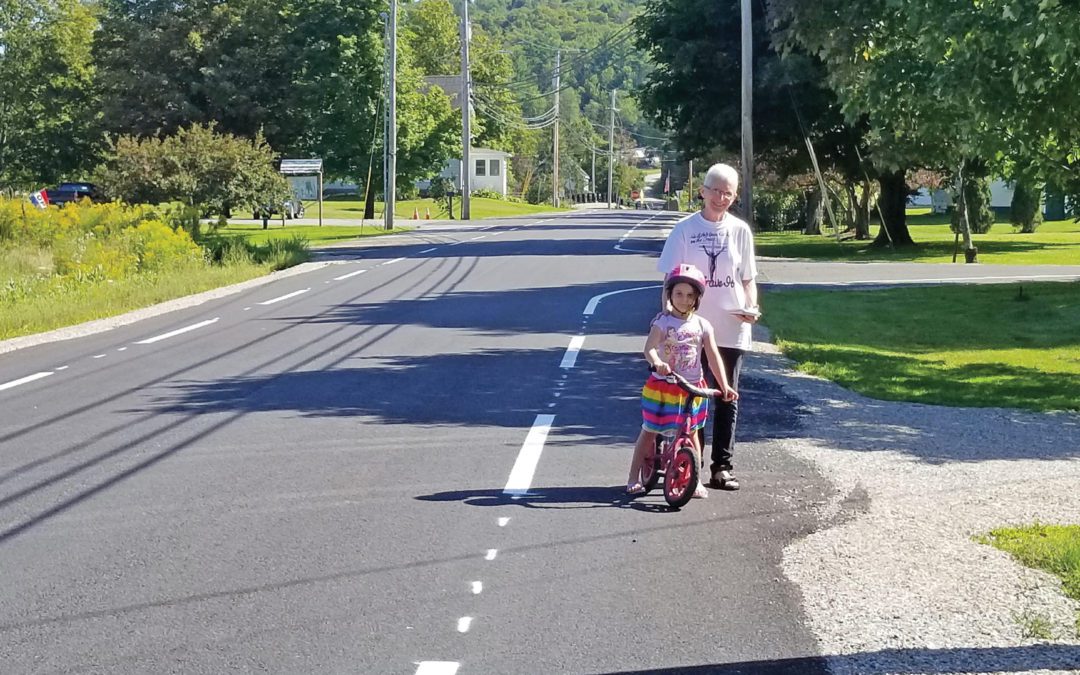 LORRAINE PATTERSON AND her granddaughter Lena Jones take a breather while having fun biking on Lincoln’s Quaker Street, which recently were made more friendly to bikers and pedestrians thanks to painting of “advisory lanes” that create more room along the sides of the road.

LINCOLN — Lincoln’s roadways aren’t exactly ideal for bike or pedestrian lanes.
“Our roads are very narrow (22 feet in many areas) with ditches and culverts on the sides and no room for the (Vermont Agency of Transportation) requirement of bike lanes that must be four to five feet in width,” said Lincoln selectboard member Ellie Bryant.
Still, Bryant has been working for more than a year to find a solution. Now, thanks to an “Advisory Bicycle Lane Design Guide” and a $1,500 RiseVT Amplify Grant, one phase of that solution is at hand.
The grant will cover the expense of painting advisory lanes on Creamery Street and part of Quaker Street in Lincoln.
“Quaker Street was previously unpaved (and) there were local concerns that once it was paved the traffic would drive too fast,” said Michele Butler, RiseVT’s Addison County program manager. “Hence the advisory lanes.”
The project goes part way toward meeting a greater goal of making walking safer in Lincoln, especially along the main route that leads to Lincoln Community School, Butler added.
RiseVT is a nonprofit that works with individuals, employers, schools, childcare providers and municipalities to provide opportunities to “make the healthy choice the easy choice.” The organization expects to have a presence in all 14 of Vermont’s counties by the end of the year.
Bryant explained the “advisory lane” concept.
Dotted lines are painted onto the pavement to create two four-feet lanes on either side of the road, leaving a single lane for traffic, she said. Drivers will use the single lane unless there is oncoming traffic, in which case vehicles will shift right and straddle the dotted bike-lane lines. However, if a bicyclist occupies the bike lane, the driver traveling in the same direction must slow down and wait for oncoming traffic to pass.
“The advisory lanes require drivers to think about where and how they operate their vehicles, resulting in slowing down and being more mindful behind the wheel,” Bryant said.
Dotted-line lanes were painted on a portion of Quaker Street a couple of weeks ago, and solid white lines were painted on Creamery Street. The town also plans to install bike and pedestrian signs and paint bike stencils in the bike lanes.
“My observation is that cars are indeed slowing down. Residents on Creamery Street have complained for years about speeding on the short road and have responded positively, so far, to the advisory lanes,” Bryant said. “South Lincoln Road will soon be repaved, and I’m hoping to put the advisory lanes there, too.”
Eventually, Bryant said, she’d like to see advisory lanes all around town.
According to the “Advisory Bicycle Lane Design Guide,” such lanes have been implemented across the country and in Canada, with positive results.
In an additional safety improvement, Lincoln recently widened the pavement next to the town office to create parking spaces that would keep parked cars out of the Quaker Street traveling lanes during church services, election days and meetings at the town office, Bryant said.
The advisory lanes are part of Bryant’s longer-term commitment to slowing down traffic and making Lincoln a safe place to walk and bike. Last December Lincoln installed a pair of solar-powered traffic radar signs to encourage drivers to check their speedometers.
Lincoln’s maximum speed limit is 35 mph. Nearer the town center, on Quaker Street and on River Road, drivers must slow down to 30.
Reach Christopher Ross at christopherr@addisonindependent.com.