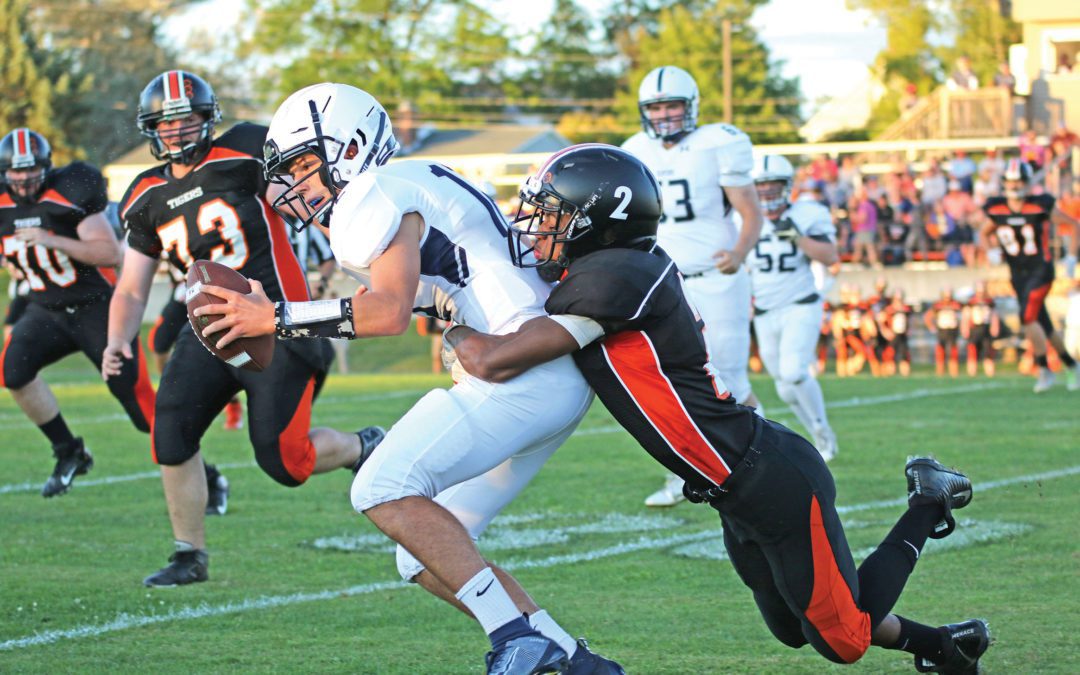 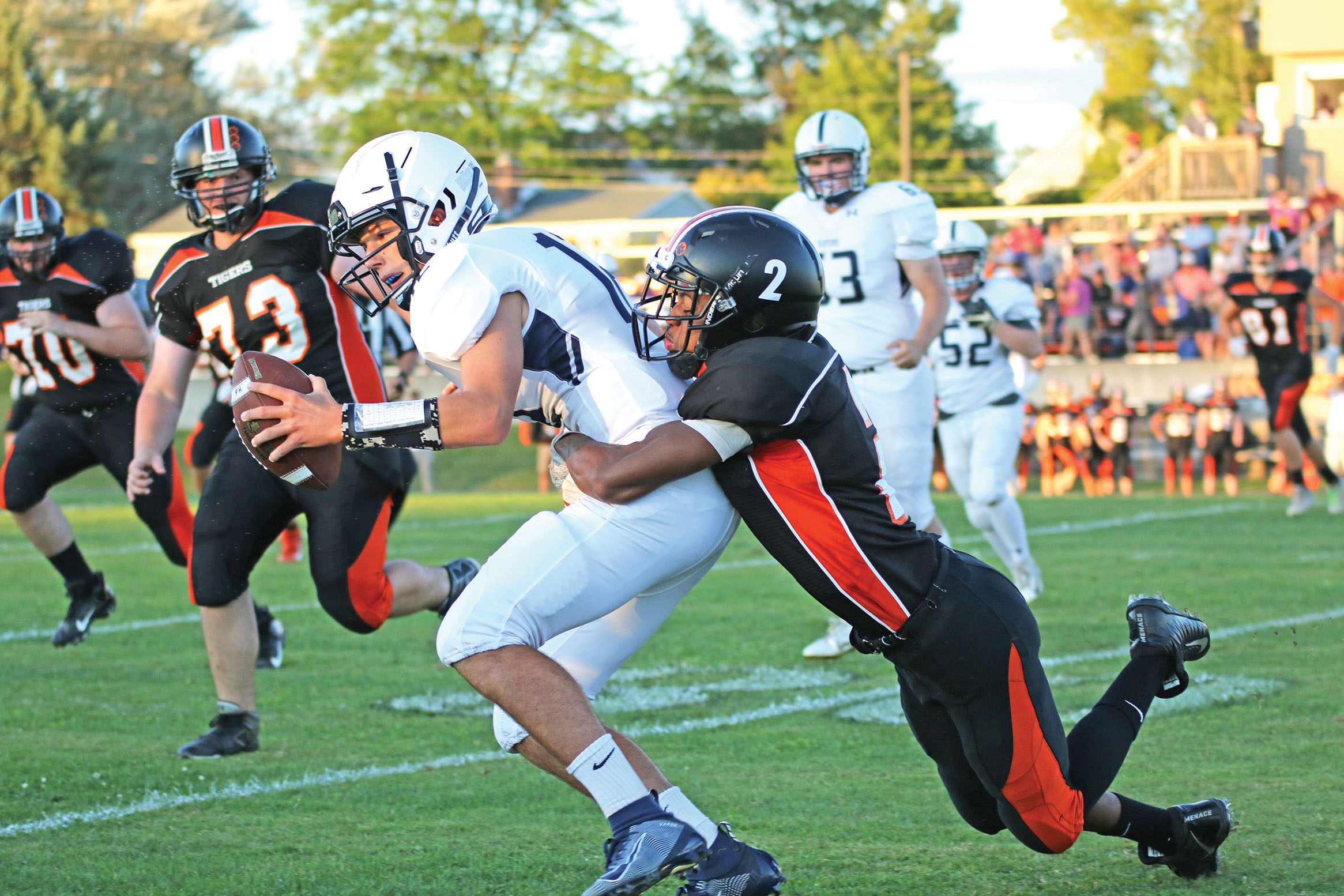 TIGER DEFENSIVE END C.J. Bryant sacks Fair Haven quarterback Evan Reed for five-yard loss on the first play from scrimmage during Friday’s game in Middlebury. That set the tone for a game that ended with the home team winning, 34-14.
By Andy Kirkaldy

MIDDLEBURY — Friday’s season opener on Doc Collins Field for the Middlebury Union High School football team pitted the Tigers, a losing Division I semifinalist in 2018, against Fair Haven, a D-II finalist.
The game was expected to be a challenge, but it didn’t work out that way.
The Tigers romped to touchdowns on their first three, and four of their five, first-half possessions and held the Slaters to 48 first-half yards on the way to a 34-0 lead at the break.
They won, 34-14, after Coach Dennis Smith mixed subs in freely in the second half.
Smith would have liked to see a more consistent 48-minute performance, but he was pleased overall. Of particular note was the effort of an offensive line with four new starters: senior veteran right tackle Trysten Quesnel is being joined by senior center Andrew Hillman, junior guards Jack Rizzo and Colin Bradford, and sophomore left tackle Sam Warren.
“We came out very well. They (the line) were really communicating and picking things up,” Smith said. “In the second half I thought we got a little complacent in terms of our line. We got our heads down and we didn’t see the blitz coming. But first half we were picking things up and guys were hitting the holes, and I was very happy with the way we were moving the ball.”
The Tigers veteran backs — senior quarterback Tim Goettelmann, senior halfbacks Tyler Buxton and Ian Ploof, junior halfback C.J. Bryant, and senior fullback Thatcher Trudeau — were running wild in the first half, when they combined for 155 yards on 18 carries, led by Buxton’s five attempts for 66 yards and a touchdown.
Buxton also caught 25- and 23-yard TD passes from Goettelmann, who ran for an 18-yard score and returned an interception 37 yards for the other Tiger TD. Goettelmann played the first half and completed four of six attempts for 64 yards.
Buxton said “a little bit of everything” was working for the Tigers in their dominant first half.
“Our run plays, our pass plays. Our linemen. Our lineman did an excellent job blocking for us running backs and the quarterback. Our defense really stepped up and made tackles when we needed it, and the pass coverage was excellent. On all four cylinders we just did really well,” he said.
Bryant, arguably the MUHS defensive player of the game, set the tone for the Tigers on the game’s first play from scrimmage, sacking Slater QB Evan Reed for a five-yard loss.
The Slaters went three-and-out on their first four possessions as Bryant and linebacker Nikolai Luksch teamed up to sack Reed on their second possession, cornerback Gabe Dunn stopped a tight end Shawn Clark short of the stick on their third possession, and back Dylan Lee lost six yards on first down on their fourth.
Meanwhile the Tiger offense went to work. The first MUHS drive went 76 yards on five plays, two of them Buxton runs totaling 40 yards, and ended with a wide-open Buxton catching a 25-yard Goettelmann toss over the middle at 8:33 of the first. Next, Goettelmann’s 18-yard run at 5:35 of the first capped a 50-yard, three-play march that included a 19-yard Bryant burst.
At 10:49 of the second Buxton cruised untouched into the end zone from a yard out to conclude a nine-play, 63-yard drive. Buxton caught a 16-yard pass from Goettelmann on third-and-nine from the Slater 36 to keep that drive alive.
After the teams traded punts the Slaters finally got a first down on a Reed completion to shifty back Kohlby Murray, but soon punted again. The Tigers got the ball on the Slater 42 after a personal foul, and after Ploof and Trudeau runs moved the ball to the 23. Goettelmann hit Buxton with a short pass, and Buxton broke one tackle and eluded several other Slaters on the way to making it 28-0 after another Luksch extra point. Goettelmann’s interception return then capped the Tiger scoring.
The Slaters showed some life against a mix of Tiger starters and backups in the second half and scored on their opening drive, a 76-yard march. Murray capped it with a two-yard run that Reed set up with passes to Andrew Lanthier and Aubrey Ramey. Reed also hit Ramey for a late score from three yards out; that TD finished a 78-yard drive that featured a 24-yard screen pass to Lee on a third-and-eight play.
Reed went 18-of-38 passing for 131 yards, and was sacked four times for 31 yards of losses. Zach Bean and Quesnel also brought Reed down. Murray rushed 13 times for 82 yards, mostly in the second half.
Bean quarterbacked the Tigers in the second half and completed a pair of passes for 22 yards, both on the only Tiger second-half possession on which they moved the ball, 43 yards to the Slater 10. A fumble on an exchange recovered by Clark killed that threat.
Bryant (seven carries, 40 yards) and Goettelmann (four carries, 32 yards) contributed to a Tiger rushing attack that saw eight rushers in all pick up 199 yards on 32 attempts. The Tigers gained 288 yards, 219 in the first half.
Even after the lackluster second half Smith didn’t sound like he would be losing too much sleep before this Friday’s game at Burlington/South Burlington (0-1 after a loss to Burr & Burton), although he said the game film would help correct a few mistakes.
“It was a tough second half, trying to get the backups in, and I’m trying to make sure we’ve got good sportsmanship, not blow them out. And we gave up some things,” Smith said. “But for a first game, as long as we don’t have any major injuries, all in all I think we came out fine.”
And Buxton said the Tigers are confident moving forward.
“We’re feeling pretty solid. We have high expectations for ourselves, but we’re going to go in level-headed,” he said. “We’re not going to go in cocky. We’re just going to play football, game by game.”