‘Major Arcana’ shows Vermont as it is 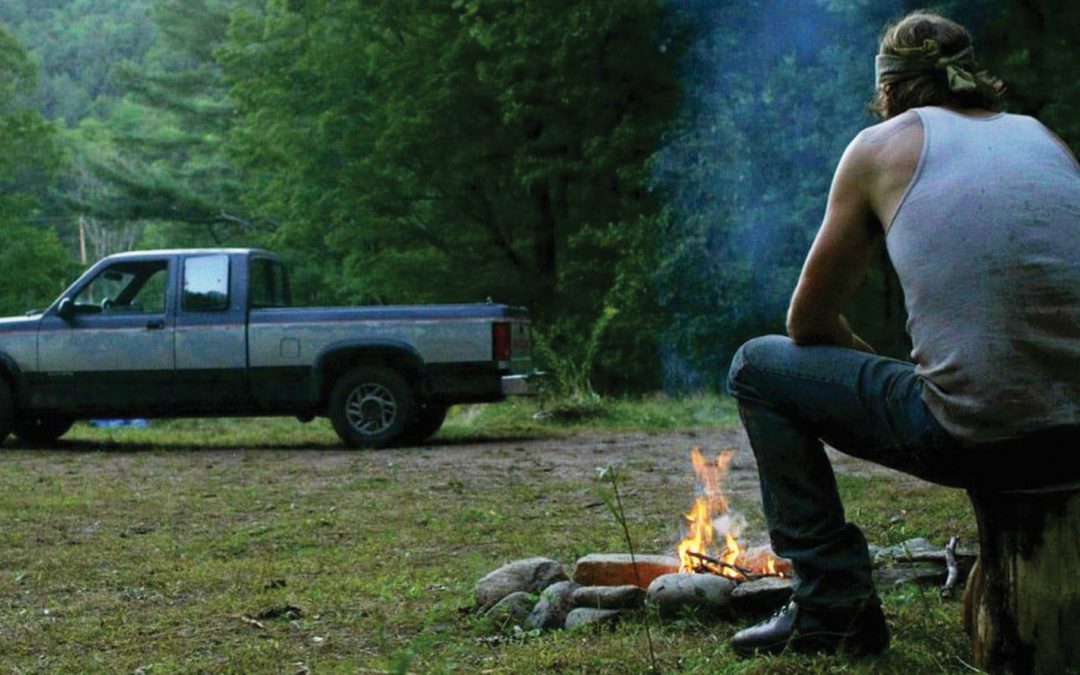 ‘Major Arcana’ shows Vermont as it is

DINK, PLAYED BY Ujon Tokarski in John Melrod’s “Major Arcana,” is a master Vermont carpenter but relentlessly clueless when it comes to relationships. The Vermont film screened at the Middlebury New Filmmakers Festival late last week.
By Christopher Ross

MIDDLEBURY — It’s unlikely that any of the movie stills from Vermont filmmaker Josh Melrod’s first narrative feature, “Major Arcana” (2018), which was screened last Thursday at the Middlebury New Filmmakers Festival, will ever get turned into a Woody Jackson or Sabra Field painting.
Melrod’s derelict Windsor County landscapes lack the openness and order such idealism requires, as do his alcoholic characters, who feel as if they’re constantly struggling to deserve what little light shines down on them.
All of which, of course, is by design.
“The thing about Vermont is that it’s so beautiful, and in the movies it’s always this postcard,” Melrod said in a Q&A after the screening at the Marquis Theater. “But when you’re actually in Vermont, you see that Vermont is many things, and it’s not always a postcard, and there’s a grittiness and realness that’s not often depicted.”
Appropriately enough, “Major Arcana” opens with an old pickup truck rolling to a stop in front of a ramshackle house.
Dink, an itinerant carpenter played by Barnard resident and first-time film actor Ujon Tokarski, has returned home to sort out the property he inherited from his father, an alcoholic whose house more closely resembles a homeless encampment than a home.
We get our first glimpse of Dink’s own struggles when he removes all the beer from his father’s fridge and starts pouring it down the drain. In the sort of “empirical” moment many alcoholics will recognize, he catches some of the beer in his cupped hand, contemplates it for a moment, and slurps it up. Nearly frantic, he spits it back out, then rinses his mouth with tap water.
Dink will face similar temptations throughout the film, each a little more insidious than the last, but for now he repairs to the woods (now his), where he intends to build a cabin by hand.
That project, and the persistence and precision with which Dink undertakes it, provides “Major Arcana” with its narrative structure, its sense of hope and much of its beauty.
The hands that measure, cut, hew, hoist and fit the timbers belong to Tokarski, who is a carpenter by trade. Cinematographer Ramsey Fendall captures the work with such patience and affection that you can almost feel the straight edges and smell the sawdust.
Deep in these woods it begins to feel as if some kind of redemption is possible for Dink.
The outside world, on the other hand, feels pretty hostile.
In the film’s first line of dialogue (which is a long time coming), Dink’s ex-lover Sierra (played by the wonderfully expressive British actress Tara Summer) approaches him in a local dive, where he’s trying to eat, and says, “You look retarded.”
Later, even as Dink attempts to reconnect romantically with her, Sierra will slap him, pour beer into her cleavage and demand that he lick it, and insist that he’ll never get a job in town because no one likes him.
Dink’s mother (played to frightening perfection by Lane Bradbury) is no better.
In their second scene together, she tells Dink she’s glad he’s there.
“Me, too,” he says.
“No,” she says. “I mean the shower drain is clogged.”
Later she makes a couple of attempts to weasel money out of him.
To be fair, Dink doesn’t exactly make things easy for people. He may be an artist with wood, but where relationships are concerned he’s relentlessly clueless.
In one of his most out-of-left-field conversations he attempts to wax philosophical about old age — with an old farmer — and ends up putting his foot in his mouth.
And yet, even as his character flaws pile up, so, too, do the framing timbers. Post by post, beam by beam, the cabin comes together.
Melrod had conceived of Dink as a darker character than he ended up being, but the film is probably better off for the ambiguity that Tokarski’s approach to the role creates.
One element of the film that could have done with a little less ambiguity, however, was the portrayal of Dink’s addiction to alcohol.
The temptation to drink recurs often enough in the film to signal that it’s an issue, but it’s never entirely clear how high the stakes are. What would happen, really, if Dink starts drinking again? Is it a matter of survival? Or something else?
It’s possible that Melrod’s seemingly casual treatment of these temptations is meant to convey additional information about his character’s haplessness, but if that’s the case, it doesn’t quite come through.
Still, “Major Arcana” is a fine film, acted with spirit, shot with adoration and crisply edited.
Audiences farther flung than the Green Mountain State will find plenty in it to appreciate. Vermont viewers looking for something of their place-based selves in this film may come away with something even better: a reminder of just how universal our human struggles turn out to be.
Reach Christopher Ross at christopherr@addisonindependent.com.