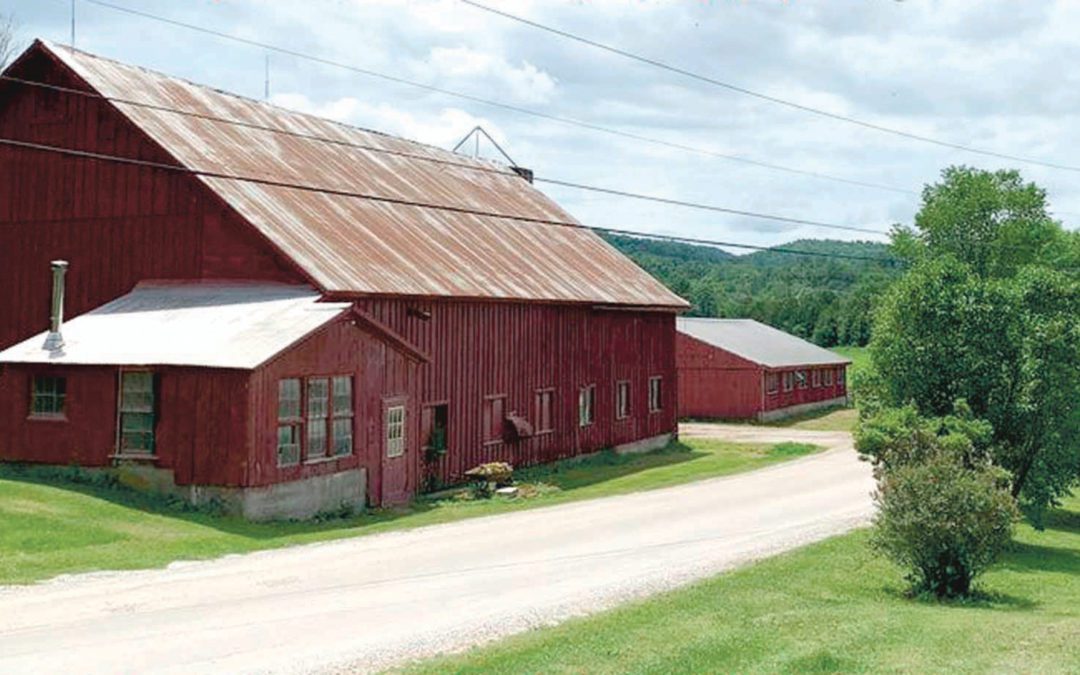 THE BARN OPERA’S new building, located near the Sanderson Covered Bridge off Pearl Street in Brandon, will double the current seating capacity.
By Russell Jones

“The phenomenal craftsmanship of 19th century Vermont is more than evident in the construction of this barn. The post-and-beam construction, with hand-hewn beams, is breathtaking.”
— Josh Collier

BRANDON — The melodious voices that make up the Barn Opera company will soon be getting a new home. After two years inside the barn of Brandon Music on Route 73, the opera will be moving to the west side of Brandon on Pearl Street.
“We have looked at, trespassed in, and explored every barn larger than 20 by 40 feet in the area,” said Artistic Director Josh Collier. “At long last, we have found an absolutely perfect venue in a phenomenal post-and-beam dairy barn, adjacent to the Sanderson Covered Bridge.”
Collier said that the intimate space of the current home of Barn Opera provided beautiful acoustics and was a phenomenal venue, but it’s 50 seats just weren’t enough to hold Brandon audiences that wanted to see the opera.
“We’ve sold out every performance,” Collier said. “The venue was great for us and we tried hard to make it work so we could stay, but adding on to the building would not have been cost-effective and would have taken away from the special qualities that building has.”
The new barn, which sits near Otter Creek, is 73 feet long, by 35 feet wide, with pine flooring. The size will allow the opera company to provide two separate spaces. The lobby/preshow area will be home to a bar serving only Brandon wine and beer, a reservations counter and café tables for those audience members that arrive prior to the start time for a beverage.
The doors to the auditorium are large barn doors that will be closed prior to the performance and opened on sliding rails once the audience is invited in to find their seating. The new auditorium will hold approximately 100 to 120 folding theatre seats, the Compass Music and Arts’ Steinway B Piano and instrumentalists, as well as some backstage space for performers.
“The phenomenal craftsmanship of 19th century Vermont is more than evident in the construction of this barn,” said Collier. “The post-and-beam construction, with hand-hewn beams, is breathtaking and truly a window into a time gone by.”
It was at one time part of the Sanderson Family Farm, but was eventually sold to long time Brandon residents Jim and Nancy Leary.
Although still in the early stages, BARN OPERA directors have plenty of big plans for the new property, including a pre/post-show lounge with a fire pit and benches, The Founders’ Garden with inscriptions of the generous donors that made the purchase of the property a possibility, and a rotating sculpture art exhibit.
Holding an event as grand as an opera inside a barn may seem strange to some, but to that Collier simply smiled and said, “good.”
“The opera has traditionally been held in these big lavish places, full of red velvet,” the 31-year-old singer said. “Some people don’t feel comfortable in that scene, but I think it is valuable to have this art form carry on. If you strip away the grandiosity and bring it to a human level, it is very powerful.”
Collier said the intimate setting of barn opera distills the art down to its purest level and brings fans right up to the performance, less than 20 feet from the stage. And they do it with no amplification, purely powered by the strength of the singer’s vocal projection.
“We’re seeking to change the paradigm,” he said. “What we have with Barn Opera is the pure virtuosity of the human voice in a completely naked form.”
Collier said the Opera-Inside-the-Barn has been such a hit that they get fans from all over. There are regulars attendees from places such as Ireland, Montreal and New Jersey, but it has also been a hit with the performers.
“I currently have a list of 160 singers who want to perform with us,” the tenor said. “And part of the reason they want to be here is the town of Brandon, itself, is a big selling point.”
Collier said many of the performers treat it as what he calls a “workation.” For them, it is a six-day experience in which they get to enjoy Vermont in a relaxed atmosphere, perform that weekend and then head back out on Sunday.
The residents of Brandon are also a big help for Collier. He said the company has more people willing to host performers in their homes than they have performers.
“The community has adopted Barn Opera from the very beginning,” he said. “With the support we get from the community, it makes my job easier because I don’t have to fight to make these performances happen.”
The nature of the Barn Opera and the way it strips away the pomp and circumstance of the traditional opera is something Collier said is unique to Brandon and likely wouldn’t translate as well anywhere else.
“It is so unique and we want to keep it as this little jewel,” he said. “If it was in other places or other states, it wouldn’t be as special as it is.”
The first show in the new barn will take place next May and there will likely only be three shows next year, instead of the usual four.