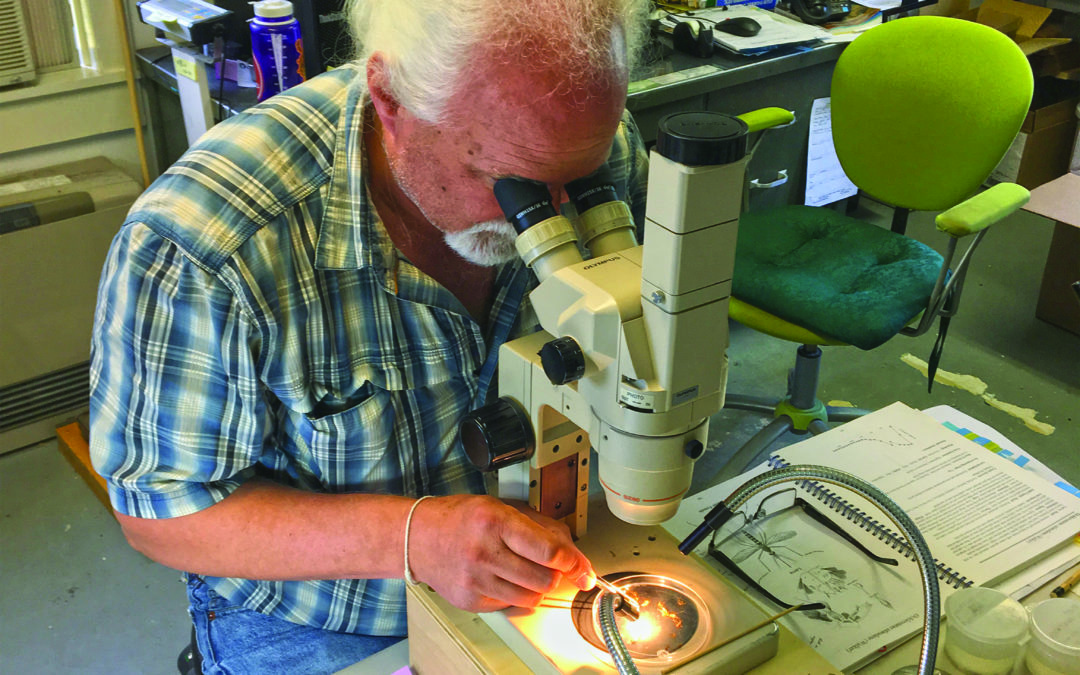 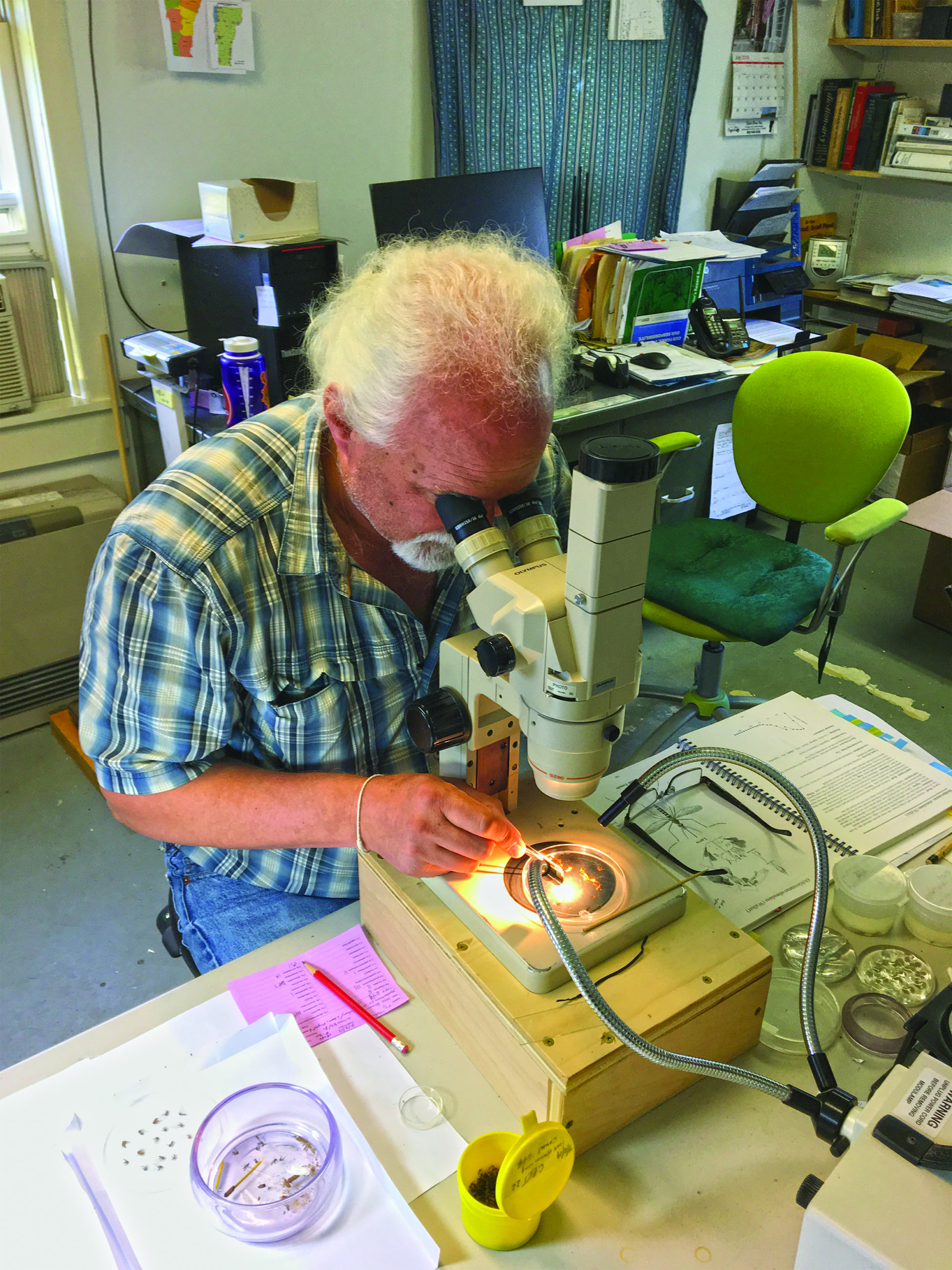 CRAIG ZONDAG, THE Lemon Fair Insect Control District’s field coordinator/biologist, looks through a microscope at an example of one of the more that 25 varieties of mosquitos known to buzz around the member towns of Bridport, Cornwall and Weybridge.
By John Flowers

WEYBRIDGE — Lemon Fair Insect Control District officials received more than 20 mosquito complaints last week from residents in the LFICD’s three member communities, and they are ramping up education efforts to reduce spawning grounds for the pesky, blood sucking vectors.
The LFICD,  made up of Bridport, Cornwall and Weybridge, was created in 2006 to battle seasonal mosquito infestation in the lands along the Lemon Fair River. The district, with support from the Vermont Agency of Agriculture, spreads mosquito larvicide in floodplain areas where mosquitos are likely to breed following heavy rain.
It’s been an intriguing and active spring and early summer for mosquitos, according to Craig Zondag, the LFICD’s field coordinator/biologist, and David Dodge, the board president.
Zondag explained while there have been more mosquitos than last year, the ones that are annoying folks this spring and summer have primarily emanated from standing water in culverts, wheelbarrows, tires and other receptacles, rather than from massive spawns in the floodplain area.
In essence, the water levels have been so high and volatile in the floodplain areas that mosquito larvae haven’t had a chance to gain a foothold for the maturation process.
“Extremely high water and sustained flooding from snow melt and frequent rains in April and May made it difficult to dip and evaluate the consistency of mosquitos hatching throughout the valley,” Zondag stated in his June 27 report to the board. “We chased new high-water lines and found no larval activity. When water levels receded to ‘mean’ flood levels, larvae began to show up. Concentrations of larvae were isolated in pockets along the flood plain in places we expect to see them. And other expected sites were void of any larval activity.”
Early June larval sampling continued and showed no new hatches, according to Zondag. That June sampling — through water “dips” and illuminated traps at strategic locations — provided district officials with benchmark data for next flood and a new potential hatch — which could produce enough nuisance mosquitos for aerial treatment.
But so far, Zondag said there’s been no need to conduct aerial drops of larvicide within the district. Those drops have this year been conducted by hand, though district officials are exploring the use of drones for spreading larvicide. Drones being used for this purpose in other parts of the country have a payload of 40 pounds.

When on-the-ground testing, rainfall and other weather factors portend a major mosquito hatch, the LFCID contracts with the New Hampshire company JBI Helicopter Services for an aerial drop of larvicide. Since each drop costs around $30,000, officials make sure the service is truly needed and that it covers a majority of the district’s approximately 1,600 treatable acres, according to Dodge.
“They’ve done excellent work for us,” Dodge said of JBI.
The LFICD used to have its own airplane to conduct aerial drops. District directors got rid of the plane in 2015, due to maintenance issues and high insurance rates.
Unlike the Brandon-Leicester-Salisbury-Goshen-Pittsford Insect Control District, the Lemon Fair District doesn’t spray adulticide to tamp down adult mosquitos.
“It doesn’t make sense for us to do it,” Dodge said, referring to the added cost and spread-out homes within the LFICD. “My sense is that the residents in our three towns are not interested in adulticiding unless the mosquitos get really bad.”
The LFCID has a budget of $95,000 for fiscal year 2020, which runs from July 1, 2019, until June 30, 2020. The district receives $6,000 each from its three member towns, with the balance coming from the state of Vermont, according to Dodge. The state’s two mosquito districts submit expenses to the Agency of Agriculture.

NO STANDING WATER
Right now, Zondag is counseling district residents on ways they can discourage mosquito breeding on their property. The top bit of advice is to limit or eliminate any outdoor items that can host standing water, such as woodland pools, pails and old tires. He explained backyard ponds are also prime breeding spots for mosquitos.
Zondag spends a lot of time in the field, and behind a microscope. He’s learned to detect the more than 25 kinds of mosquitos that like to visit the Addison County area.
Area residents can learn more about the LFICD at its annual open house, scheduled for Saturday, July 27, from 10 a.m. to 2 p.m. at its lab/office behind the Weybridge Congregational Church at 2790 Weybridge Road.
For more info, visit the Lemon Fair district’s website at lficd.org.
Reporter John Flowers is at johnf@addisonindependent.com.