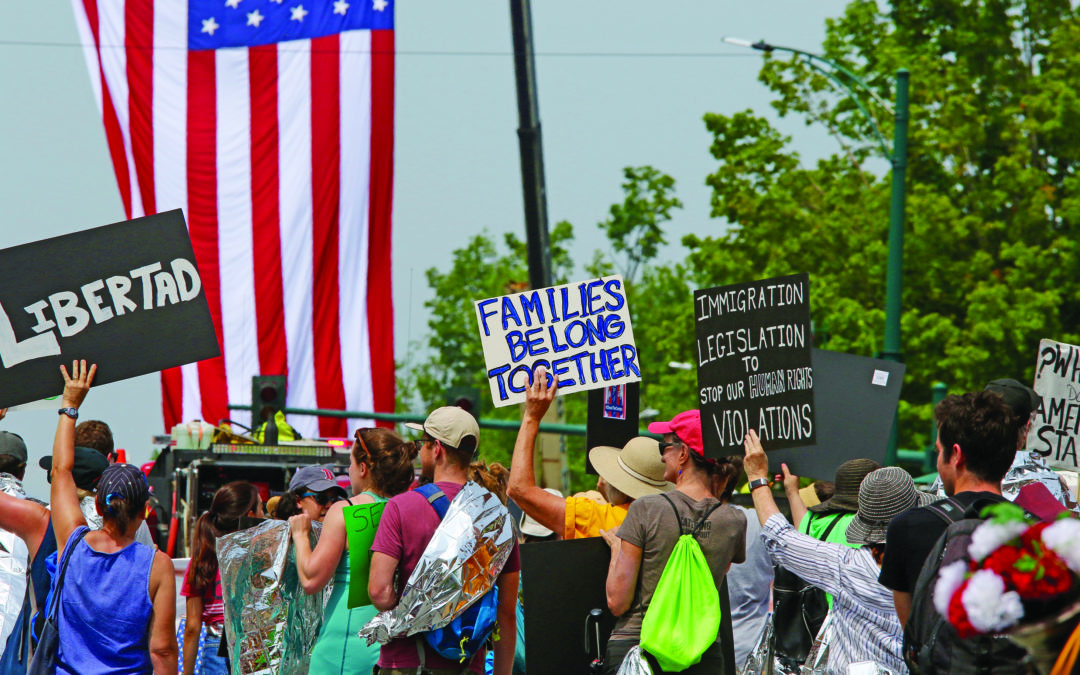 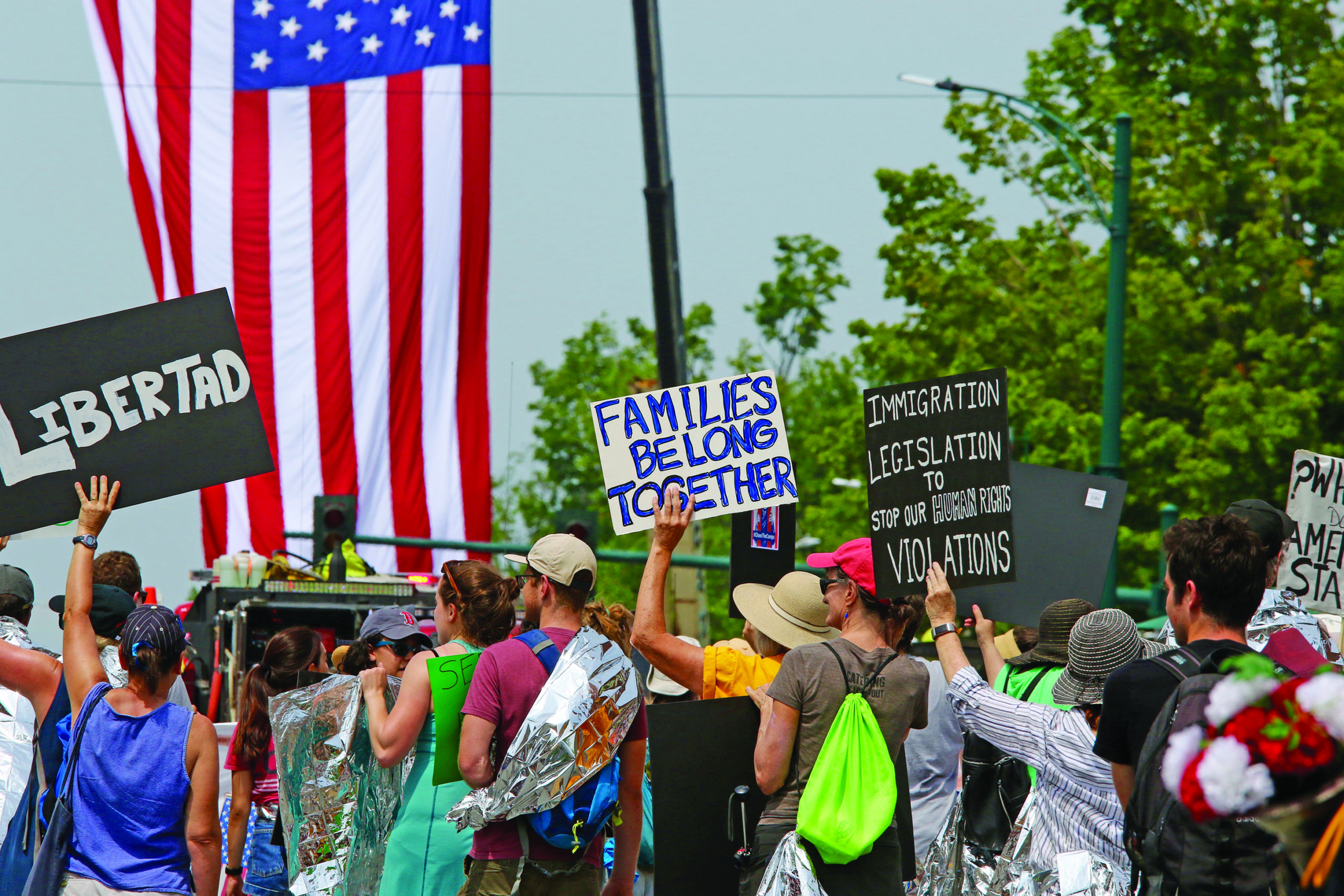 MEMBERS OF SHOWING Up for Racial Justice demonstrated their patriotism in the Bristol 4th of July Parade on Thursday by protesting U.S. migrant-detention policies at the southern border. Draped in the same style of “space blankets” that are distributed to children at those facilities, protestors carried signs, passed out flyers and received applause every step of the way. Independent photo/Steve James
By Christopher Ross

BRISTOL — Dozens of people organized under the banner of Showing Up for Racial Justice (SURJ) marched in the Bristol Fourth of July Parade on Thursday, to protest both U.S.-run concentration camps on the southern border, and the increasing presence of Immigration and Customs Enforcement (ICE) agents in Vermont.
The marchers ranged in age from three and a half to 76, and they carried signs with messages like “Keep families together,” “No cages for kids” and “Asylum seekers are not criminals.”
“I don’t think there was anything more patriotic that I could have done today,” said SURJ organizer Caitlin Gildrien after the parade. “I love my country, and I think it needs to do a lot better than what we’re doing right now. And I think a lot of Americans agree that we’re at a point in time where we need to make some noise.”
Parade spectators seemed to agree. SURJ marchers were greeted with applause, thank-yous and a total of $260 in cash donations.
“We were about 50 when we left the staging area,” Gildrien said, “but some people joined us along the way, so I think by the end it may have been 60 or more.”
Similar protests are taking place in Vermont and around the country:
On June 29, nearly 100 protestors rallied in Newport, Vt., after three migrant farmworkers from Mexico were arrested and turned over to ICE for deportation.
On July 2, as part of a nationwide network of nearly 200 scheduled rallies, hundreds of people shut down a block of Church Street in Burlington to protest concentrations camps run by ICE and for-profit prison companies, where migrant children who have been forcibly separated from their families are being detained indefinitely, in some cases without adequate sanitation, nutrition or medical care.

‘CONCENTRATION CAMP’
Observers who are familiar with the conditions of U.S.-run migrant-detention facilities are now calling them “concentration camps.”
According to Merriam-Webster, a “concentration camp” is “a place where large numbers of people (such as prisoners of war, political prisoners, refugees or the members of an ethnic or religious minority) are detained or confined under armed guard.”
Though “concentration camp” is most often associated with the camps created by Nazis in World War II for the internment, persecution and murder of Jews and other prisoners, the first known usage of the term, with the above definition, dates back to 1897.
“The sad truth is that this is part of a long history of America systematically separating families — slaves, indigenous people,” said Gildrien. “It’s not a matter of ‘This isn’t who we are,’ because it is. It’s a matter of ‘This isn’t who we should be.’”

WITNESSING
Just days before the Bristol parade, Rep. Mari Cordes, D/P–Lincoln, visited a privately run concentration camp in Homestead, Fla., 45 miles south of Miami, where, according to The New York Times, roughly half of the 2,300 child prisoners have been detained for more than 20 days — some for months.
Cordes joined about 150 people who had formed a “witness camp” across the street from the facility, and who took turns standing on stepladders so they could see over the fence and offer support for the children inside. Some of the witnesses held giant paper hearts above their heads.
“The first day I was there, the kids playing out in the yard were very interactive with us,” Cordes said in an interview with the Independent after the Bristol parade. “We told them, ‘We are with you’ and ‘You are not alone,’ and they would send kisses or abrazos — hugs. The next day — because there were more and more people coming to the Homestead site, so that it was getting more and more attention — it was clear that they had been spoken to. Very few of the kids responded to us.”
When the witnesses walked the perimeter of the facility, they were followed by Customs and Border Protection agents.
“These are migrants who were fleeing political unrest, gangs and sexual assault, not to mention drought caused by climate change, which is only going to get worse,” Cordes lamented. “And so it’s infuriating and heartbreaking that the Trump administration is turning these people and their struggles and their pain into a political message that they’re bad people, they’re rapists, they’re dirty, and we don’t want them in our country, and we’re being ‘invaded.’ What they’re doing is using the legal asylum process to get help. And we’re not only trying to turn them away, but now we’re putting them in concentration camps.”

CAUSE AND EFFECT
Some of the conditions that migrants are now fleeing have roots in 20th-century U.S. foreign policy.
“The U.S. has meddled into several Central American countries’ affairs and decimated their livelihoods,” said Gloria Estela Gonzáles Zenteno, director of the Latin American Studies program at Middlebury College. “It conspired to overthrow democratically elected presidents in the region, such as Guatemala in 1954. It imposed murderous regimes in El Salvador, Nicaragua, Guatemala and Honduras. The benefits, besides to the local ruling families it corrupted, went to a few U.S. corporations, such as the United Fruit Company (now known as Dole and Chiquita), and to the military-industrial complex that sold equipment to military and paramilitary forces.”
Those who survived the decades of civil war and genocide were denied an education, land, safety and gainful employment, which prompted many of them to migrate and seek asylum in the United States, she explained.
And such conditions were only made worse by the North American Trade Agreement (NAFTA), “which imposes unlivable wages for work at maquiladoras, which are transnational manufacturing plants that do not pay taxes, and that pass on to municipalities — and to the people — the environmental and social costs of the pollution and insecurity they cause.”
More than anything, it’s important to remember that applying for asylum is protected by U.S. law, Gonzáles Zenteno said. “One presents themselves at any port of entry or immigration agency and requests refugee status. They must demonstrate credible fear to their lives if they return to their home countries.”
The Trump administration, however, “has decided to deter this legal activity by punishing asylum seekers: separating family units and caging individuals by age and gender, with children left to fend for themselves.”
This, she said, is why they’re called “concentration camps.”