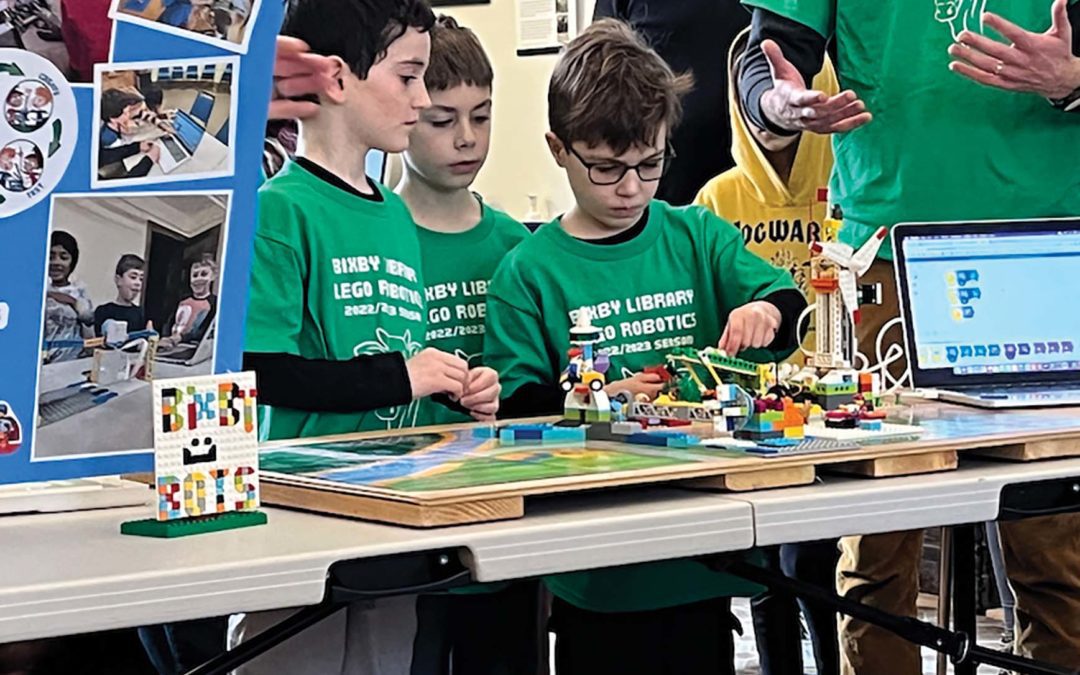 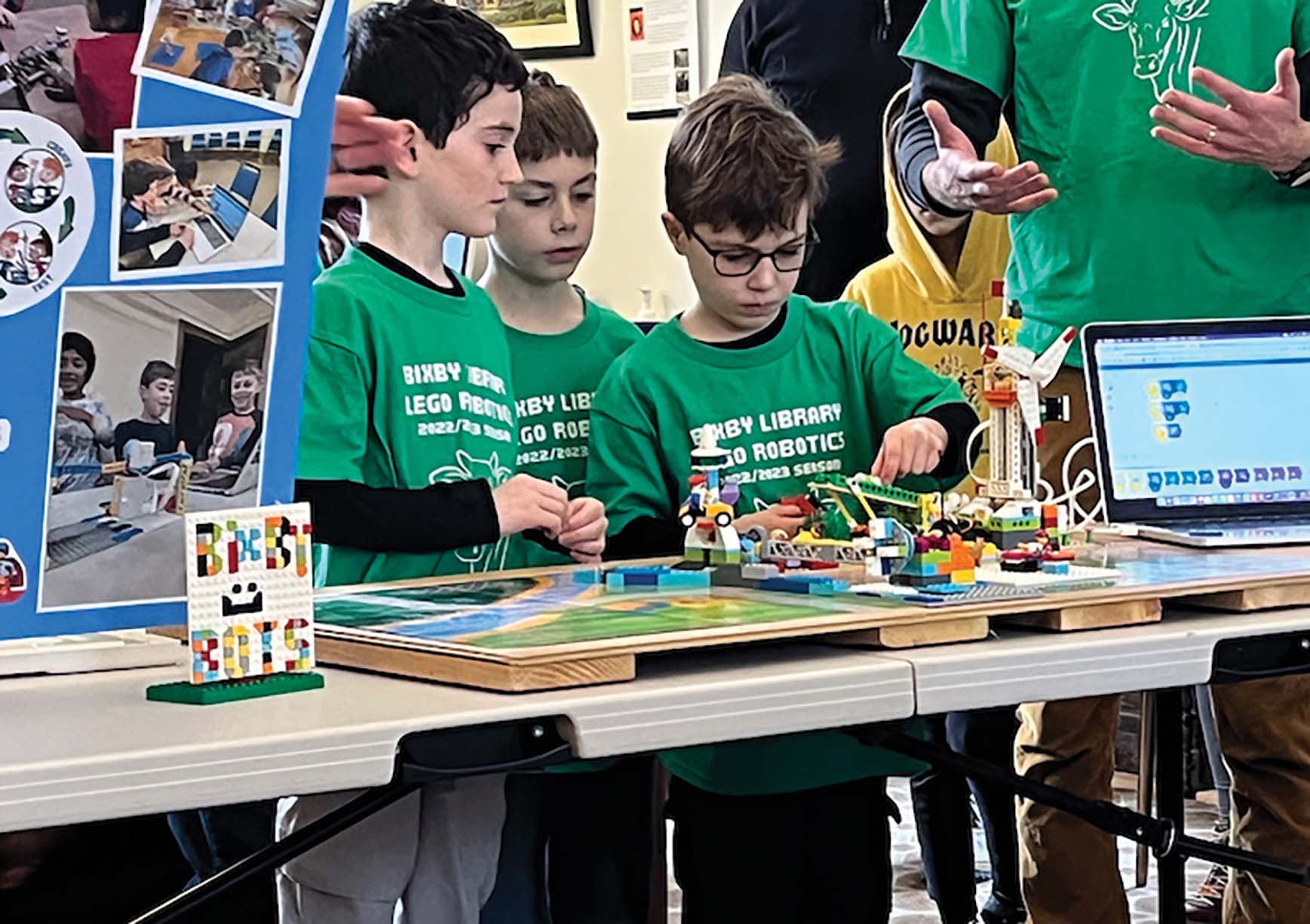 VERGENNES — Miniature turning windmills, a mobile front-loading truck and other LEGO creations — along with the local middle- and elementary-school students who built them and the mentors who helped the builders — took center stage in the Bixby Library’s Community Room this past Saturday. 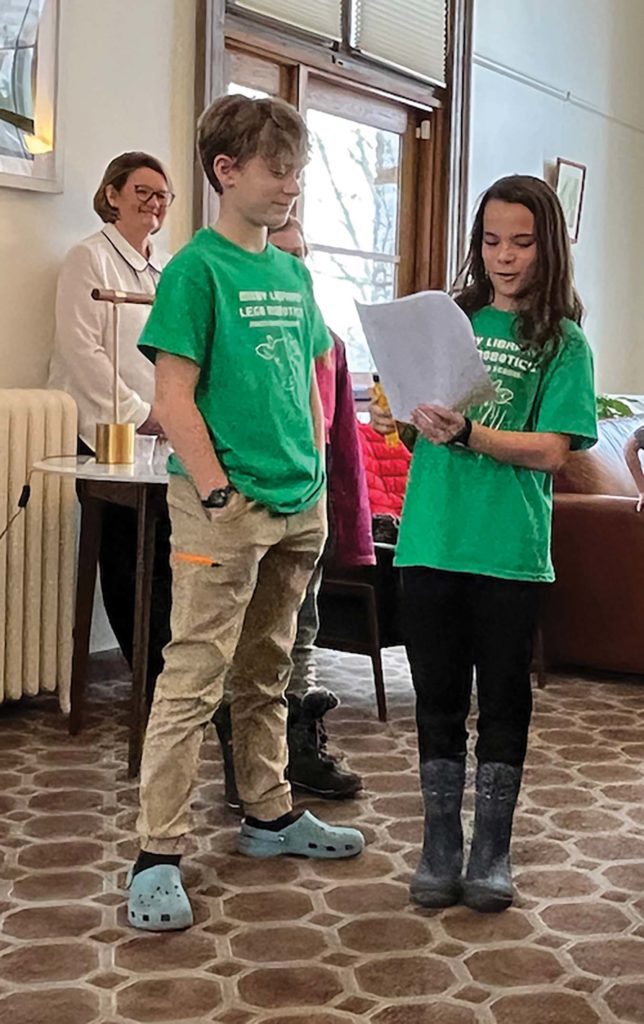 LEGO BIXBY ROBOTICS Challenge Team members Rowan and Cici Neffinger share information they learned from Green Mountain Power during a skit their team prepared as part of their upcoming competition presentation on Jan. 28. The team had a trial run of the skit and their robots at the Bixby Library on Saturday.
Independent photo/Andy Kirkaldy

The occasion was the Community Demo Day for the Bixby Lego Robotics Program. That program brought two teams, one of nine older students and one of five younger pupils, together every Wednesday at the Vergennes library since this past fall to design and build robotic projects, including writing the necessary software code, with the help of a half-dozen mentors.

Saturday’s hour-long event, which was well attended by team members’ friends and family members, also doubled as a test run for the older Challenge Team’s project.

That team’s project consists of a truck that moves two loads across a colorful surface (about the size of a sheet of plywood) to separate destinations and then triggers a windmill’s blades to start churning. Challenge Team will enter it into a Jan. 28 Statewide LEGO First Competition at Norwich University.

The theme of the contest is “Renewable Energy.” Thus the members of both the Challenge Team and younger Explorer Team also went to Monument Farms Dairy in Weybridge to learn about its manure-fueled bio-digester that provides some power to the business, and they also interviewed Green Mountain Power (GMP) officials about renewable power.

The Challenge Team also shared what they learned in a skit that will be part of their contest presentation.

Team members posed as TV journalists interviewing farmers and GMP officials, and the responses consisted of some of what they learned, such as “12 farms in the state already make cow power. They produce 4.4 megawatts of power 24 hours a day,” and that GMP “can store renewable cow power in batteries during the day and use the power from the batteries to help reduce the power peak during the evening.”

Mentoring the Challenge Team have been Michael Cross, a Bristol resident and Norwich professor who helps run the statewide competition; John Christiana; Kara Bradford; and Will Biederman, who Bixby organizers said has been the main source of coding expertise.

The younger and smaller Explorers group also had a successful display honoring local renewable power, including their own moving windmill as well as a representation of hydroelectric power as a tribute to the Otter Creek falls in Vergennes. 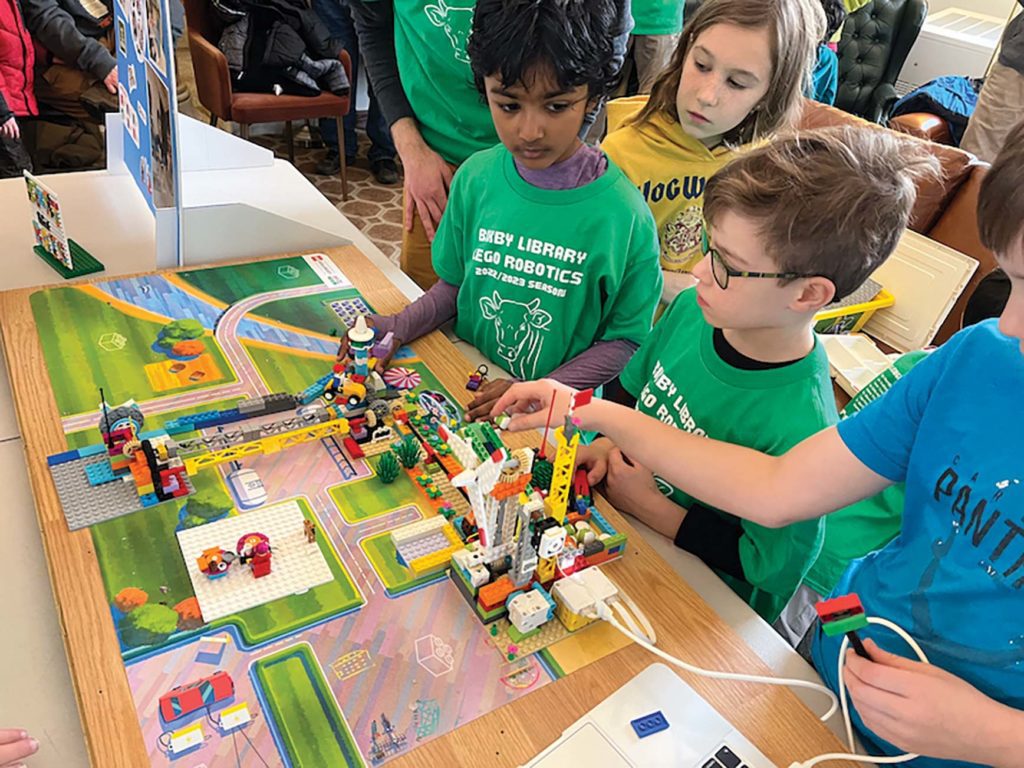 Library Director Catharine Hays said she has been “overjoyed” by the program and what it can do for the participants and the Bixby.

“It’s really reached kids that we might not have reached otherwise, in terms of interest in STEM,” Hays said. “And that’s a big aspect of what the library is trying to do, to engage young kids, get them at an early age, and get them excited, and have a place to for them come and learn about it and experience it. So the LEGO competition was really critical. The other thing was I was just so impressed with the mentors.”

Hays said the program also helped raise the Bixby’s profile in the Vergennes community and beyond, creates energy in the building, and makes the library a happy place for the participants, as it was on Saturday afternoon.

“It was such a nice crowd,” she said. “Wednesday nights have a similar feel. That’s when they meet here after school or in the early evening. And it’s just buzzing … They really own the library now. I feel like they really feel like it’s home, and that’s what we want them to have early on in their lives, for them to feel like it’s a second home.”

Bixby Children’s Librarian Mary Neffinger was instrumental in bringing the LEGO robotics program to the library, and she, too, credited the volunteer mentors.

Neffinger noted each team’s leaders included teachers as well as engineers, and many have also said they will return for more.

“I’m really excited we didn’t burn out those volunteers in the first year,” she laughed. “It’s been every Wednesday since the end of August. It’s been a good time commitment.”

Neffinger also pointed out the LEGO robotics program is more than STEM.

“It’s not just engineering and coding. It’s everything. They have to work as a team. They have to learn about whatever the theme is,” Neffinger said. “They were contacting GMP, emailing them questions. It’s really in-depth learning on multiple levels.” 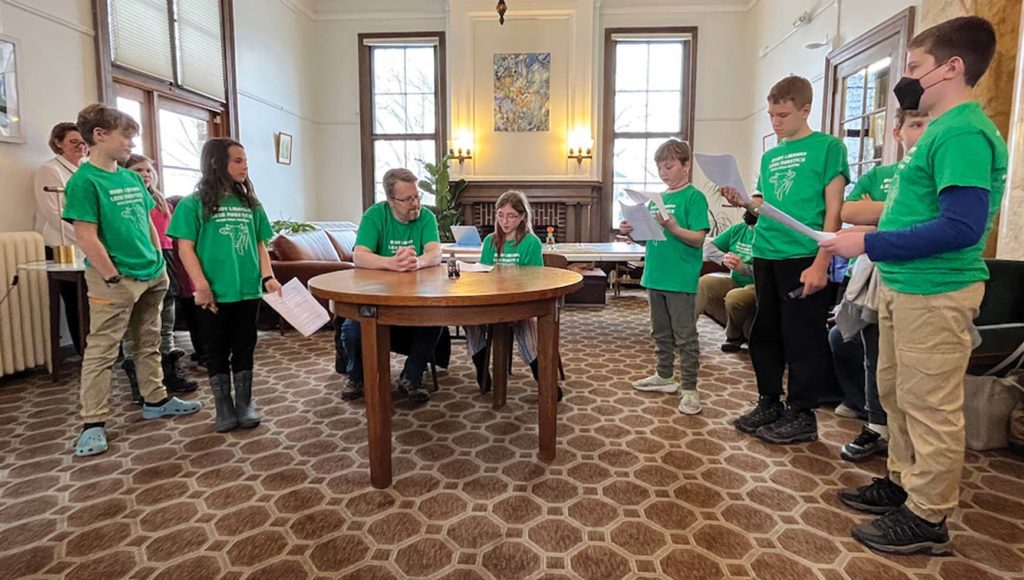 The participants are also having enough fun to keep them coming back for more, but Neffinger also echoed what some of the mentors noted during their presentations: The project presented challenges. If a robot didn’t work, often it meant going back and starting from scratch. Perseverance, thus, was another lesson.

“When they’re having success, it’s really fun. But sometimes it’s a slog. When the robots don’t do what they’re supposed to, troubleshooting is tricky. And it’s good practice in resilience, in failing and coming back and doing it,” Neffinger said.

Hays and Neffinger also singled Cross and Biederman, whose past expertise in similar programs proved invaluable; the Vermont Community Foundation, which awarded the Bixby a $3,000 Spark grant to get the program rolling; and Collins Aerospace, which also contributed materials and expertise.

Hays also confirmed the Bixby would like to bring LEGO robotics back.

“We hope to learn from this, get a strong program launched, and have it as an annual event, an opportunity for kids to become involved,” Hays said. “One of the things we’re hoping is maybe to field a high school team next year.”

And, of course, this is not the library’s only LEGO event: Its popular all-ages LEGO contest will return next month.

“It’s absolutely still on,” Hays said. “It will be the Saturday after the February (school) break.”

Michael Cross helps run the statewide competition, which would welcome more local programs and could support them, according to the Bixby librarians. He may be reached at mcross@firstpartners.org.