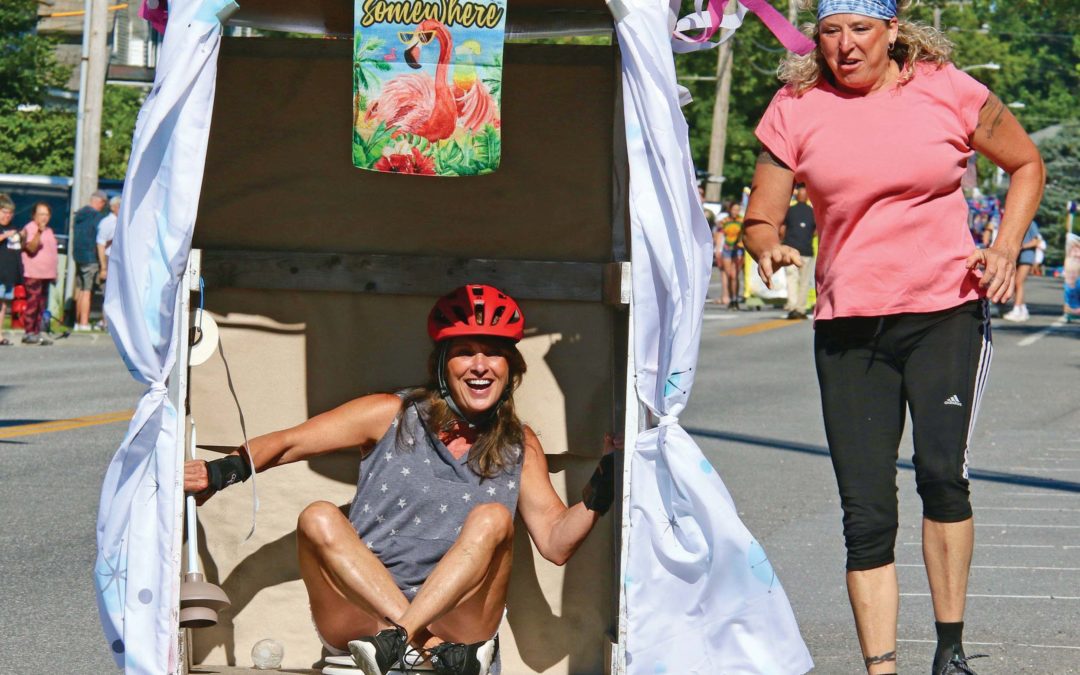 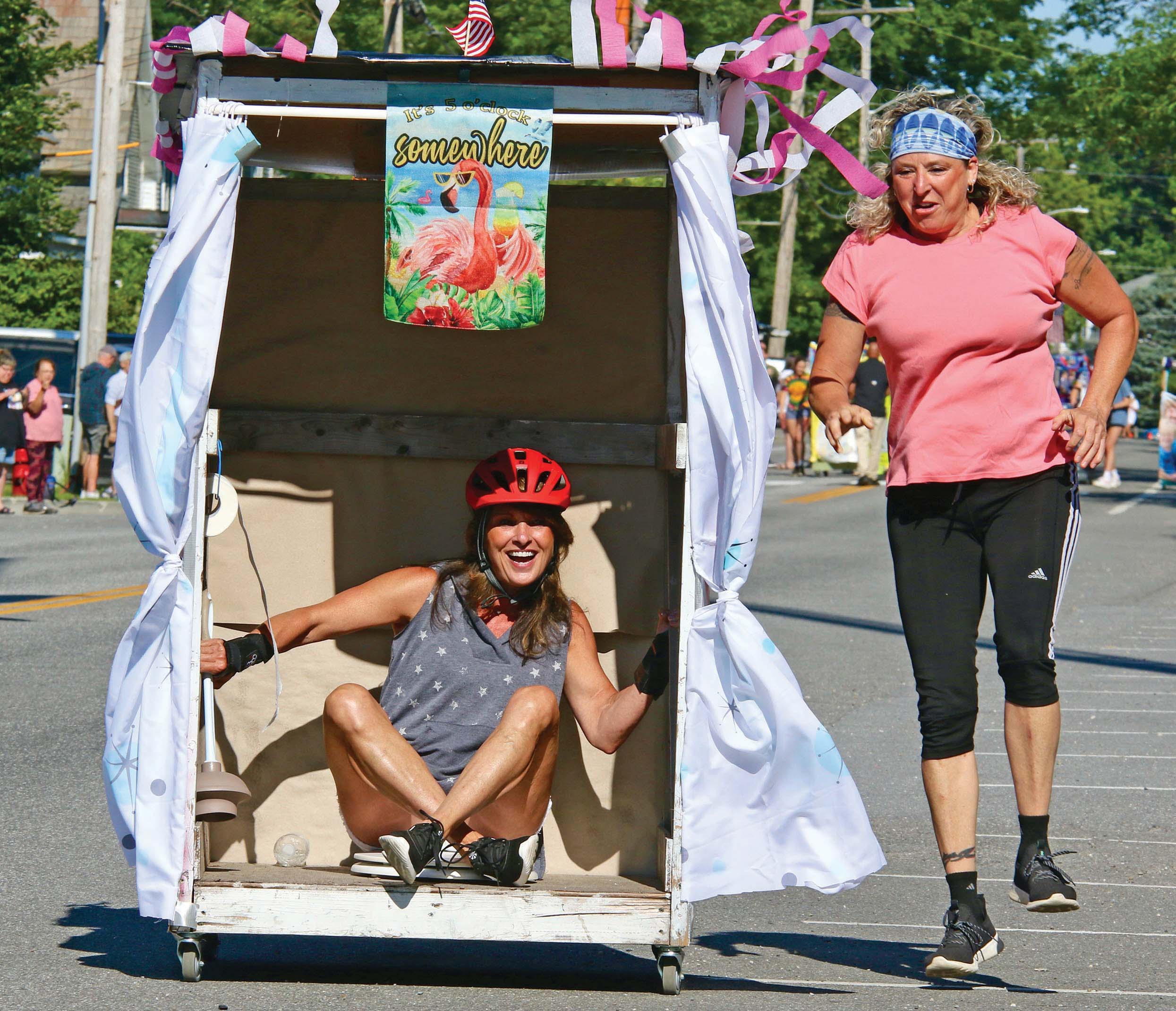 BRISTOL — You don’t often hear of people choosing to sit in an outhouse for fun. But everything is different in Bristol on July 4 for the annual Outhouse Races, which returned to Bristol’s main drag Monday morning after being run “unofficially” in a residential neighborhood for the past two years because of the pandemic.

In this annual Independence Day competition, helmeted, smiling competitors sit happily inside rolling portable potties, their hands gripping the sides for dear life, while two teammates push and/or pull them up West Street the entire breadth of Bristol’s town park. The finish line crosses the road in front of Holley Hall. 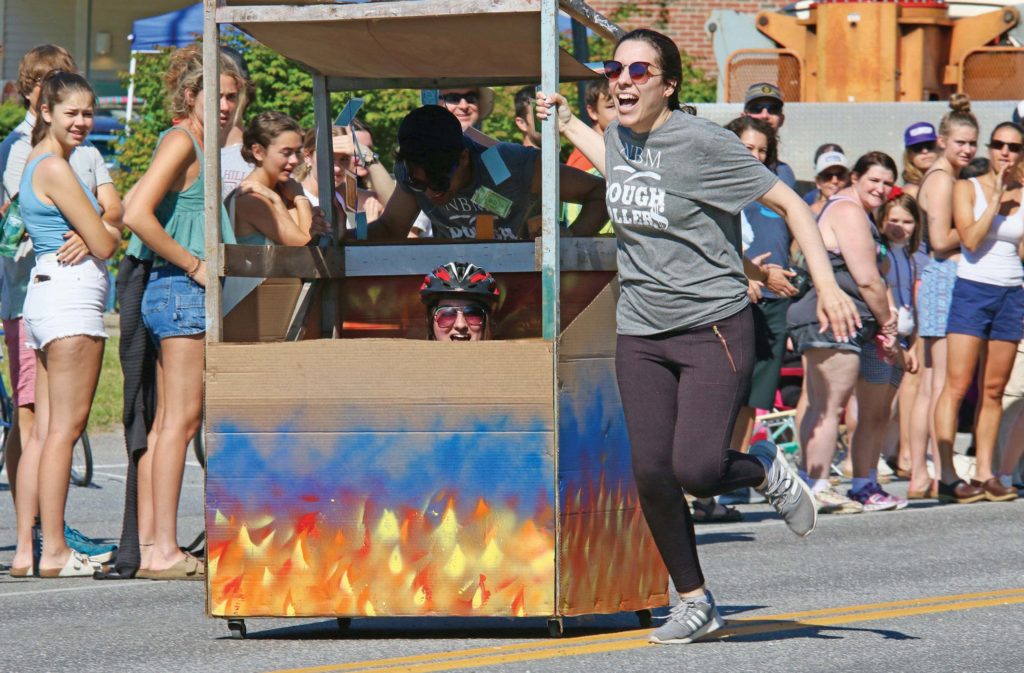 THE NBM TEAM are practically spitting fire their outhouse is moving so fast.
Independent photo/Steve James

Of course, these are not typical smelly outhouses. Instead, they are brightly decorated as lemonade stands, cocktails, churches and more, all the better to capture the spirit of the event.

“Anybody can race in the Bristol Outhouse Race,” announcer Fred Baser told the crowd lining both sides of he street on Monday before the big parade. “It’s fun, it’s a memory. You and your team, I’m sure, will be on your mom and dad’s best place for photographs.”

But don’t be fooled. Just because it’s fun doesn’t mean it’s not competitive, or that strategy and technique aren’t in play. 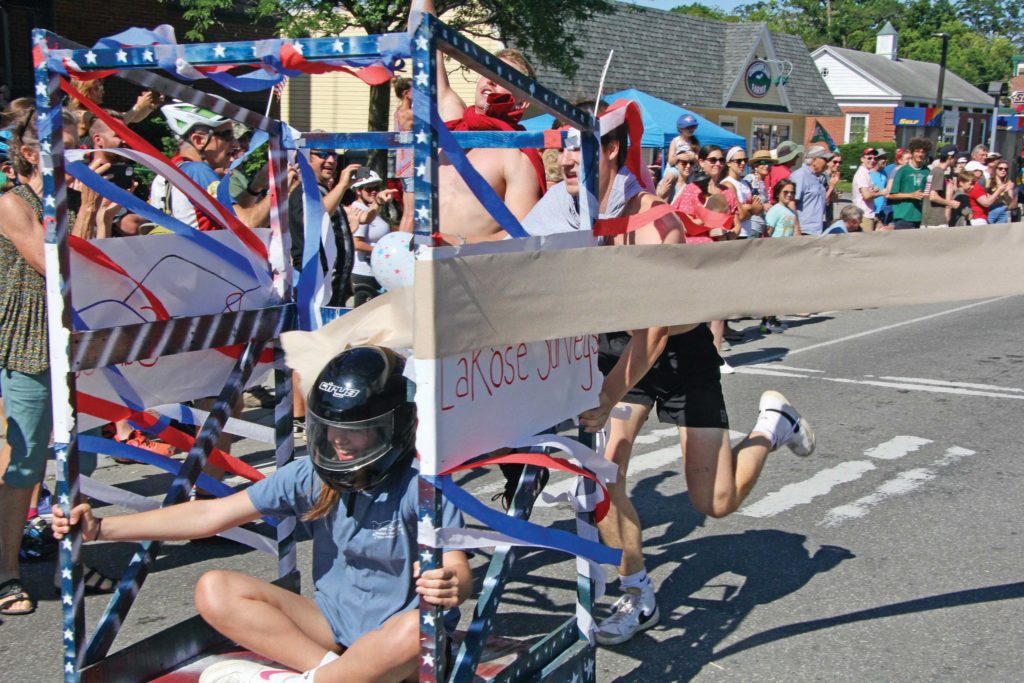 Should the runners stand behind the outhouse? Use two hands or one to push? How should the rider sit? These are all questions that competitors of every generation attempt to answer in the minutes leading up to the daunting, five-second countdown to the 9 a.m. start time of the races.

“The first one, when I was on the milk crate, they took off and I came right out the back,” said Emma Colby, who rode in the outhouse for winning team LaRose Surveys. “But the second one I just rode without the crate, all good.” 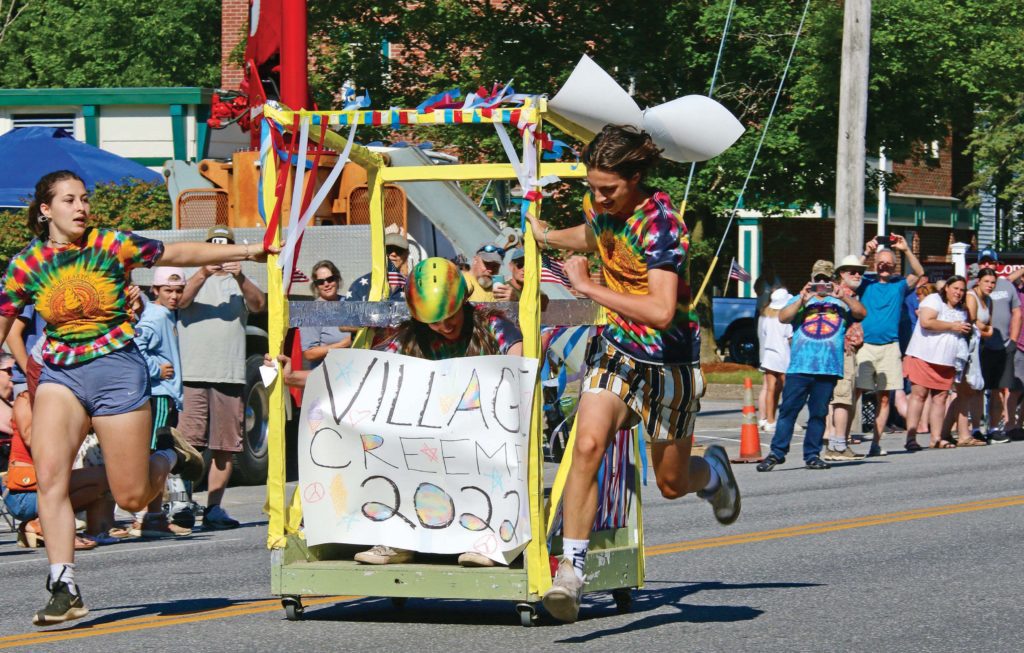 Despite it being their first time participating in the races, the team had confidence from the beginning.

“We’re pumped to win,” said Zeke Savage, one of the runners, before even racing in the first round.

Tristan Pudvah, a runner for The First Baptist Church outhouse, changed his running technique during the run itself, realizing that he needed to use his outside hand to pump his run, and the inside one to push the outhouse. His other runner, Maisy Hill, caught on, and together, they pushed Jakob Hill through the toilet paper finish line, stretched across the road and secured by a plunger on each side. 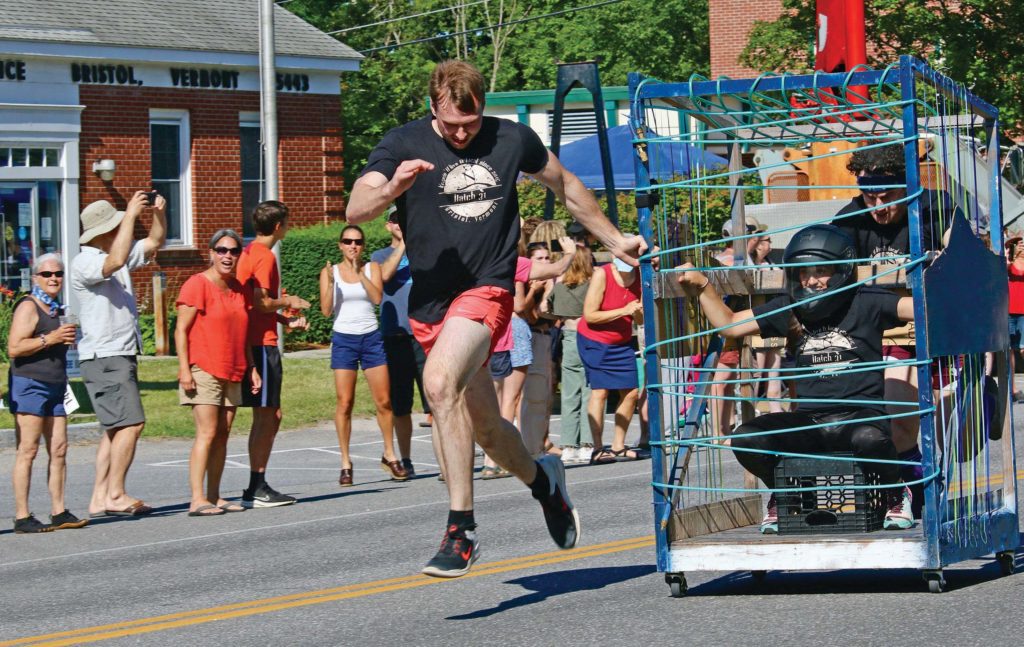 MEMBERS OF THE Hatch 31 team pull and push their way through a preliminary heat on Monday morning.
Independent photo/Steve James

That’s not to say these teams hadn’t practiced beforehand. But everything was different on the July 4 race day, with an enormous crowd lining each side of the street, and Baser commenting over a loud speaker.

“It was harder because there was a whole crowd watching,” said Oliver Zelonis, 13, a runner for the 5Town Riders mountain biking team. “When we raced by ourselves we were just sort of fooling around, but it was, like, the pressure was on.”

The team had initially planned to roll a toilet paper roll behind them from the back of their outhouse, but the race started too quickly. 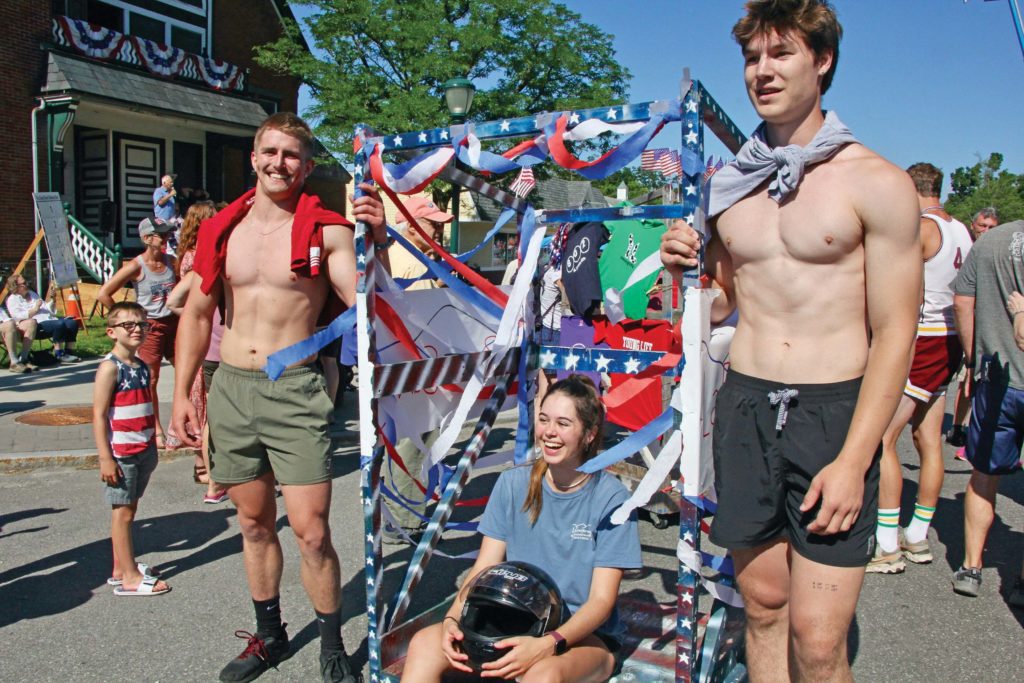 “It was scary,” said Joe Sullivan, 14, who rode in the outhouse. “We almost ran into the crowd, so that was interesting.”

The 5Town Riders ultimately placed second in their heat.

“We race mountain biking in the fall, so part of our team is that we don’t always win. But we have fun and we work together,” said coach Julie Clark.

But the loss was not easy on everyone. How did it go for reigning champs, Lincoln Construction Company?

“Not great,” said longtime competitor and multiple winner Cameron Perta, a runner for the Lincoln team.

He worried that his squad’s poor lane placement had contributed to their second-place finish in the final round, but conceded the strength of the winning team. 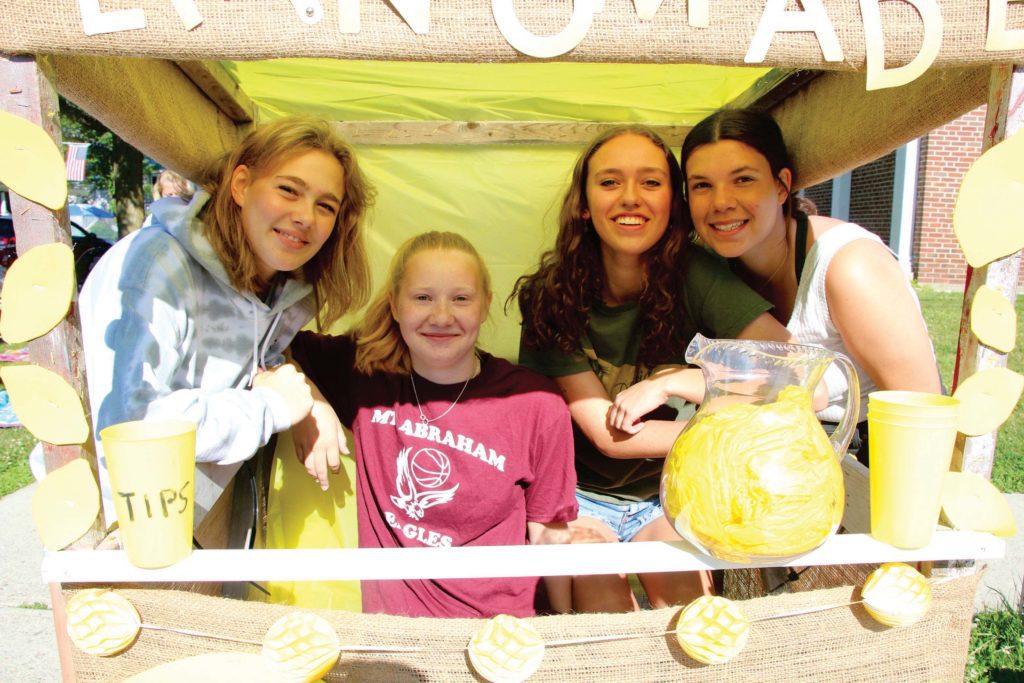 Koby LaRose, a runner for the LaRose Survey team, reported being tired out from running the 5K road race earlier that morning. But his career as a basketball and lacrosse player at Mount Abraham Union High School, from which he graduated in 2021, helped give him the athletic prowess to prevail, he said.

“It was an effort there at the end. We were trying our hardest, but luckily it panned out for us. Everybody did great. We’re all friends with everyone in the race, so it’s all fun,” LaRose said. 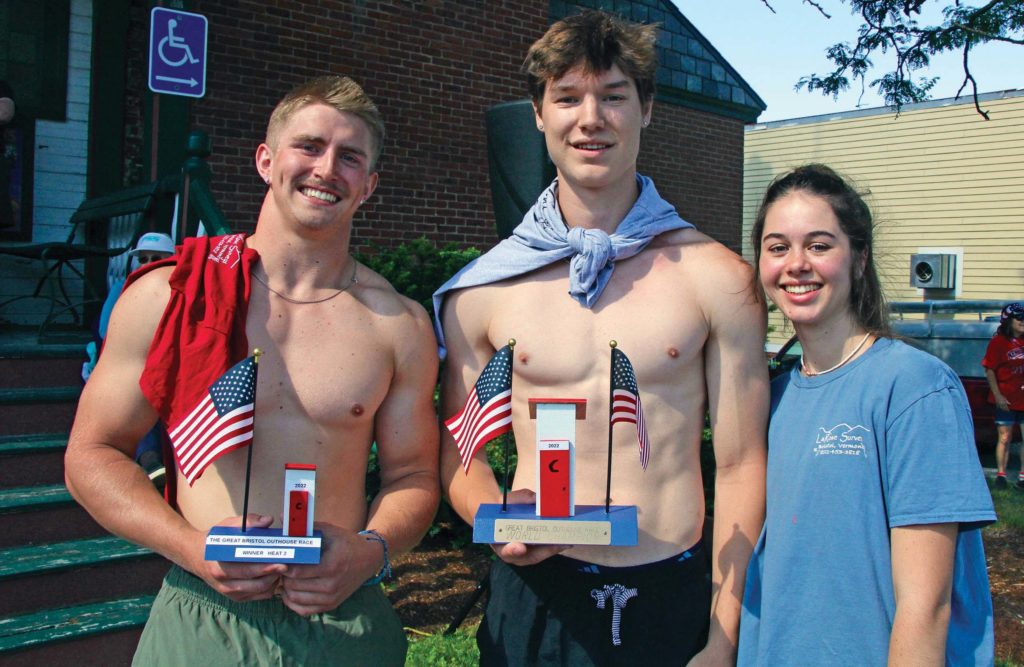 The team crossed the finish line just milliseconds before Lincoln Construction Co. But the competition isn’t over yet, as both teams vowed to return next year, craving a victory.

“Same team, same mentality, we’re back at it. Until it’s named after us, we’re coming back forever,” Perta said.

“We gotta hold the title next year,” Savage said. “We’ll be here.”