“Every prosecutor I talk to says they have around 300 cases, which to me means you’re failing; you’re charging too many … Focus on the cases that are really serious: the predators, the people who are malicious and actually affect public safety.”
— Eva Vekos

She now wants to flip the script and take on the role of prosecutor, specifically as Addison County’s new state’s attorney.

Keen interest in the county’s top prosecutor job is being fueled by the fact that it’s an open seat. Former Addison County State’s Attorney Dennis Wygmans, a Democrat, left the post in May to become one of two Traffic Safety Resource Prosecutors in the state. Gov. Phil Scott recently decided to name Bevere acting state’s attorney until the upcoming election, a move that has angered members of the Addison County Democratic Committee who had urged the governor to pick a successor from a list of Democrats submitted by the party.

“I think it would be a natural step from where I’m at now,” Vekos said of the job.

She’s already had an eventful career.

It began in 1997 as a trial attorney and appellate counsel in the juvenile rights division of the New York City court system. She represented children and youth in juvenile delinquency and abuse/neglect cases at trial and the appellate level. She also advocated for youth in foster care and in juvenile detention, assessing their needs while devising the “least restrictive placement plans.”

“It was at the tail end of the crack epidemic,” Vekos recalled. “We were representing impoverished, urban kids, mostly Black and Brown kids, who were raised by their grandmas and grandpas, because their parents’ generation was addicted.”

It was an at-times-heartbreaking job, as she saw a lot of abuse, poverty and neglect. But the role prepared Vekos for very challenging kinds of cases.

“It was an incredible way to start out as a lawyer,” she said.

In 2006, she began an eighth-year stint as a public defender in the Superior Court Trial Office for Middlesex and Bristol counties in Massachusetts. She managed a caseload of what she called “serious felony cases” in what was a busy public defender office. She served as a lead attorney in jury and bench trials, as well as sentencing hearings. Vekos often consulted with forensic experts, investigators and social workers.

“That’s where I think I got my trial skills,” Vekos said.

In 2015, Vekos was offered an opportunity to telecommute to a new job, which led to her moving to Vermont. Her new job: working as an ad hoc appellate counsel for indigent parents and children under protection orders for Suffolk and Hampden counties in Massachusetts.

The joy of her move to Middlebury was counterbalanced by some disheartening and sobering news, however.

She was diagnosed with breast cancer.

“It was literally while the U-Haul was ready to go,” Vekos recalled. “We had bought a fixer-upper (in Middlebury), not realizing I was going to be in surgery and treatment.” 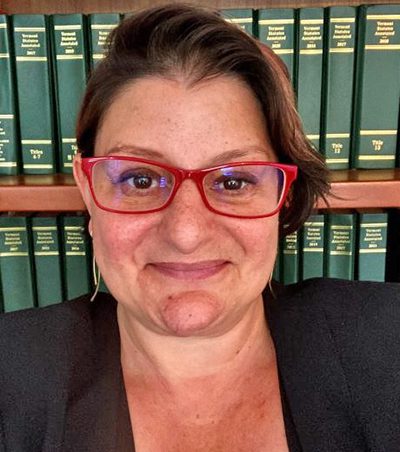 MIDDLEBURY ATTORNEY EVA Vekos is one of two Democrats who will be squaring off in an Aug. 9 primary in the race for Addison County state’s attorney.
Photo courtesy Eva Vekos

But she persevered, undergoing successful surgery and chemotherapy. Vekos signed on with Marsh & Wagner, P.C., in 2017, representing children, youth and parents in juvenile and family court matters. Marsh & Wagner holds a contract with the state to serve juveniles in the court system here in Addison County.

Now Vekos is ready to take on a new challenge — an election, which she hopes leads to a successful run as Addison County state’s attorney.

Like Lueders-Dumont, Vekos was a fan of the way Wygmans ran the office. When it was clear he was leaving, Vekos began hearing from friends and associates who encouraged her to run for the position.

She found an allure to the prosecutor’s job.

“My passion is criminal law and criminal justice,” Vekos said. “I’m very interested in policy though not so much in politics; I don’t have political ambition and I never have.”

If elected, one of her goals would be to thin the state’s attorney’s office’s caseload, triaging the less severe criminal cases to court diversion programs.

“We have too many cases, generally,” Vekos said. “There’s a huge backlog now because of COVID. Plea bargaining isn’t productive and fair.”

She was blunt in her assessment of state’s attorney’s offices that are buried in cases.

“Every prosecutor I talk to says they have around 300 cases, which to me means you’re failing; you’re charging too many and not doing enough work culling out the cases that really don’t matter,” Vekos said. “Focus on the cases that are really serious: the predators, the people who are malicious and actually affect public safety.”

She applauded Wygmans’s establishment of a diversion program for people charged with driving with a suspended license.

“I would pick that up and double-down on something like that,” she said, referring specifically to a driving under the influence diversion program.

“We’re getting the picture that there are some DUIs that are really low level,” she said. “There are the ones that are horrible with crashes and people slaughtered. But there are also some low-level ones.

While a blood-alcohol content of 0.08 is the threshold for a DUI charge in Vermont, Vekos said, “Just any influence from a drug or alcohol to the slightest degree is a crime. I think those convictions can really affect you more than you’ve affected the community.”

So Vekos believes the state’s attorney’s office could seek diversion for low-level DUI cases while also recommending treatment programs to folks with addiction issues. By successfully completing a diversion program, an offender could avoid a suspended license and quickly get their life back on track, she said.

Vekos is a fan of the Project Vision North program, which is being replicated here in Addison County. The program regularly brings together local police and human services agencies such as Turning Point, AgeWell, John Graham Housing, Vermont Probation and Parole, and the Department for Children and Families to pool resources and, when privacy laws permit, share information on clients struggling with mental health and/or substance use disorder.

“I think it would lead to less intervention on the criminal side,” Vekos said. “I think it’s the trend, and if it isn’t, it should be.”

While Vekos is a strong believer in clearing the state’s attorney’s office of minor cases, she stressed a commitment to getting convictions on the serious ones.

“I know firsthand there are some people who need to go through that (legal) process and there are victims of crimes who desire and deserve justice,” she said. “So I am 100% comfortable in that role of offering that to the community and doing it effectively.”