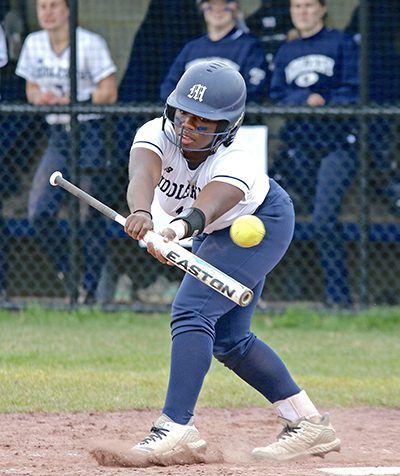 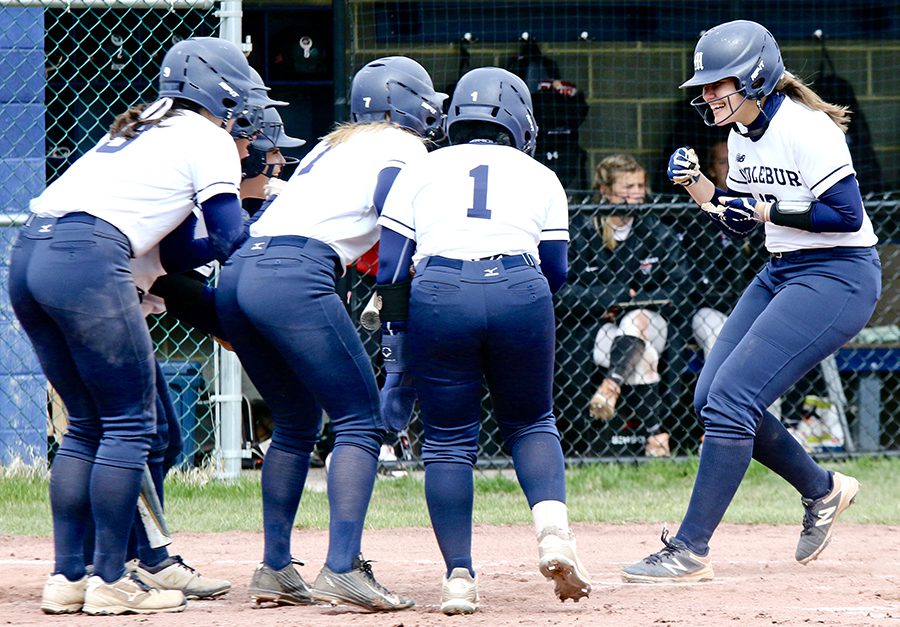 THE PANTHERS GREET senior Noelle Ruschil at home after her grand slam broke open the second game of the Middlebury softball team’s home doubleheader vs. Wesleyan on Saturday. Ruschil’s two homers in the game gave her the program’s career record and helped the Panthers to sweep the series.
Independent photo/Steve James

MIDDLEBURY — The Middlebury College softball team swept visiting NESCAC West rival Wesleyan this past Friday and Saturday to finish its league schedule at 8-4, clinching at least the No. 2 seed for the West in the upcoming league playoffs.

The Panthers also improved to 16-8 overall heading into a scheduled Tuesday non-league home doubleheader vs. Plattsburgh. They will wrap up their regular season with two weekend twin bills, at Clarkson on Saturday and at home vs. Union on Sunday.

It is unlikely the Panthers can move up to the West’s top seed while they play out their non-league schedule: Wesleyan (10-15, 2-5 league, heading into a two Sunday games vs. Hamilton) would have to take at least two out of three at first-place Amherst (18-7, 6-3) this weekend. Amherst owns the head-to-head tiebreaker vs. Middlebury.

The NESCAC East top seed (almost certainly Tufts, 15-9, 8-1 NESCAC East as of Sunday) will host the top four teams in each division in the league tournament, which will be held May 6 to 8.

This past weekend the Panthers bashed their way to three one-sided wins over the Cardinals, setting two program records for home runs in the process when they knocked four balls over the fence in Saturday’s doubleheader.

Two of those came in the second game from senior Noelle Ruschil, who hit a solo shot in the first inning and a grand slam in the second. Those gave her 16 for her career, a program best, as well as 11 for the season, a total that leads NESCAC.

The other two came from Abby Santis in Saturday’s opener, and the combined total gave the Panthers 25 as a team on the season, breaking the previous program mark of 22 set in 2016.

In Friday’s series opener the Panthers cruised, 10-2. Pitcher Jewel Ashbrook allowed the two runs on four hits while striking out five over five innings, and the Panthers combined 10 hits and Cardinal errors to break the game open.

Middlebury took a 2-0 lead in the second inning. Megan Fox was hit by a pitch and moved to third on Sophie Bolinger’s infield hit. Bolinger stole second, with Fox scoring on the errant throw. Tori Papaleo then doubled in Bolinger. 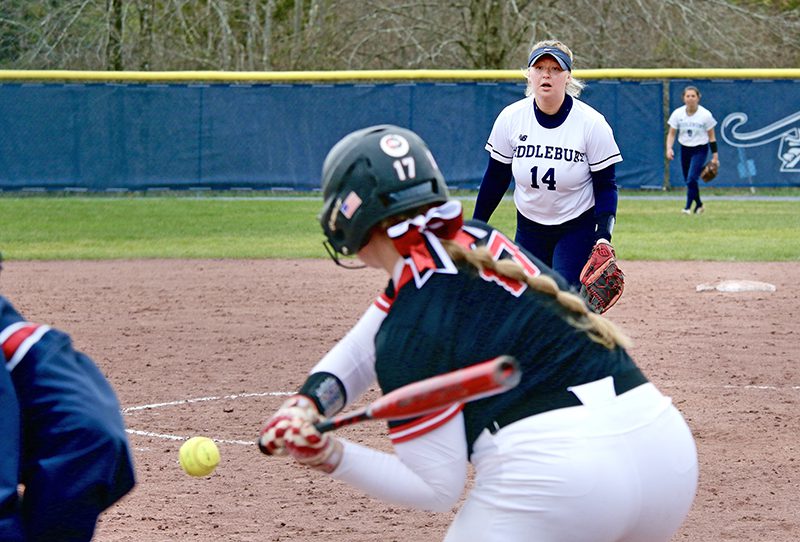 MIDDLEBURY HURLER ABIGAIL Jankowski fires a pitch past a Wesleyan batter in the first game of Saturday’s doubleheader. Jankowski earned the pitching win in the six-inning, 12-4 victory, part of a weekend sweep by the Panther softball team.
Independent photo/Steve James

Wesleyan strung three singles together to tie the game in the third. Ashbrook tossed a wild pitch after the first two, and Kendall Mancuso’s single scored both runners.

The Panthers answered with three runs in the bottom of the inning, all scoring on a Jen McGann double off the center field wall after they loaded the bases on a walk to Ruschil, a Santis single and a Jen McGann bunt.

The Panthers scored five runs in the bottom of the fourth to make it 10-2. Singles by Santis and Fox scored the first run, and a series of Cardinal sins led to four more, two driven in by a Nina Schroeder hit. When Ashbrook slammed the door in the top of the fifth, the game ended on the mercy rule.

Isabella Secaira-Cotto took the loss, allowing 10 runs on 10 hits while striking out four.

On Saturday the Panthers picked up two more mercy-rule wins, 12-4 in six innings and 12-2 in five innings.

PANTHER OUTFIELDER JORDYN Johnson tries to bunt her way on base during the second game of Saturday’s home doubleheader. The Middlebury softball team won both games to improve to 16-8, 8-4 in league play, and nail down at least second place in NESCAC West.
Independent photo/Steve James

Wesleyan took at 2-0 lead in the first in the opener on RBI hits by Sophia Sciarappa and Hannah Docktor. Santis answered in the bottom of the inning with a three-run shot that cleared the scoreboard in center field, and the Panthers added a run when Fox singled in McGann.

Middlebury’s advantage ballooned to 7-2 in the third, thanks to RBI singles from Schroeder, Tori Papaleo and Jordyn Johnson. Papaleo finished with three hits.

In the fourth, Santis became the third Panther this spring to hit two home runs in a game when she lined a two-run shot over the fence in left center.

The Cardinals scored twice in the fifth. Sciarappa doubled in a run, and Secaira-Cotta singled in the other. But a combined three unearned runs in the fifth and sixth innings made it 12-4, Panthers, and ended the game.

In the nightcap, Ruschil’s first-inning solo shot, a liner to center, gave Middlebury the lead. The Panthers then broke loose in the second, sending 15 batters to the plate and scoring nine times.

After Papaleo and Johnson singled runs home, Ruschil ripped a grand slam to left for a 7-0 cushion. Schroeder added a two-run base hit, and a McGann single made it 10-0.

Sciarappa made it 10-2 in the third with a two-run single, and McGann answered with an RBI it in the home half of the inning. Ruschil capped the scoring in the bottom of the fourth, making it 12-2 with an RBI groundout that drove in her seventh run of the game. 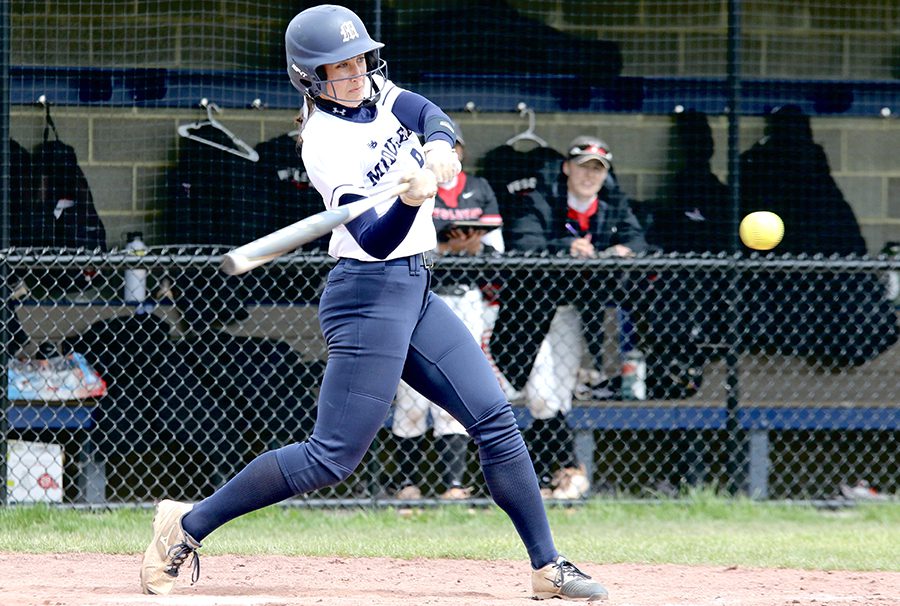 JUNIOR ABBY SANTIS squares up a pitch in the second game of Middlebury softball’s doubleheader vs. Wesleyan on Saturday. Santis had a big weekend, including two homers in the doubleheader’s first game, as the Panthers took three games from the Cardinals.
Independent photo/Steve James