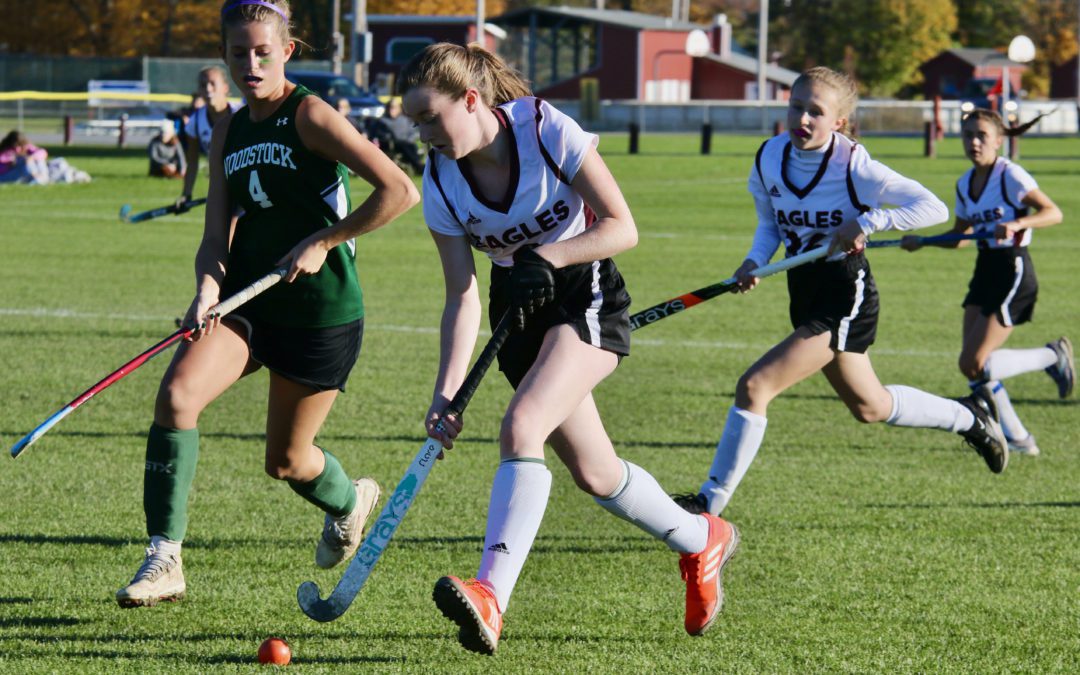 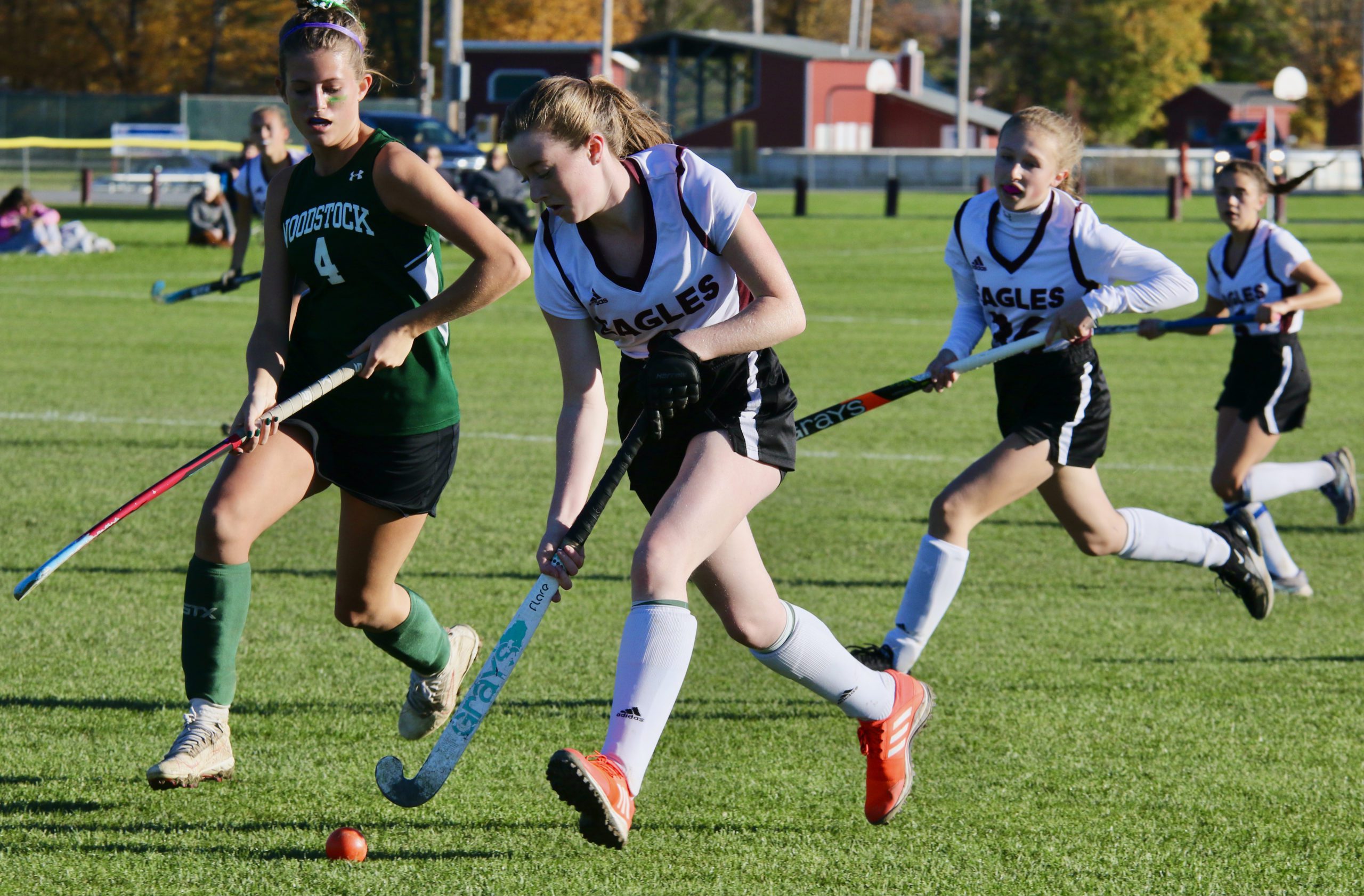 MOUNT ABE FORWARD Sarah Heath leads an attack during the top-seeded Eagles Division II quarterfinal win over No. 8 Woodstock on Friday. Heath and Olivia Campbell scored for the Eagles, who will host No. 5 Spaulding in a Wednesday semifinal at 3:30 p.m. Independent photo/Steve James
By Andy Kirkaldy

BRISTOL — The top-seeded Mount Abraham field hockey team shook off a few flakes of rust and then took care of business in a Friday quarterfinal, getting past visiting No. 8 Woodstock, 2-0. The Bristol-area team improved their record to 13-1-1.

Although their offense didn’t get on the board until the second half, the Eagles controlled play, piled up a 15-0 advantage in penalty corners and did not allow the 8-8 Wasps to launch a shot at their goalie, Maddie Donaldson, although she did come out to kick the ball out of harm’s way three times.

The Eagles will host No. 5 Spaulding (11-2-2) on Wednesday at 3:30 p.m. The time and site of the D-II final, during which the Eagles would be seeking their fourth straight title if they get past the Tide, has yet be announced. 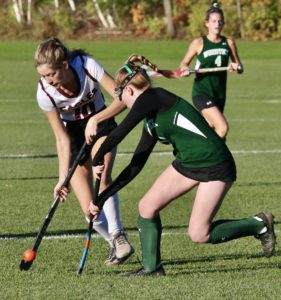 MOUNT ABE FORWARD Txuxa Konczal moves around a Woodstock defender during the top-seeded Eagles’ quarterfinal victory on Friday. The Eagles moved on to a Wednesday semifinal vs. No. 5 Spaulding. They will host the game at 3:30 p.m.
Independent photo/Steve James

During Friday’s first half the Eagles were not at their sharpest moving the ball, moving to the ball, or finishing in the circle, although they still dominated possession and forced Wasp goalie Audrey Emery to make seven of her 10 saves. Mount Abe finished its regular season on Oct. 21 and got a bye in the first round of the playoffs, so they had more than a week between games.

Coach Mary Stetson agreed her team was not firing on all cylinders.

“I’m not sure the layoff was to our advantage. Let’s put it that way,” Stetson said.

But good teams find ways to win. Stetson said the Eagles re-emphasized their short-passing game in the second half, and the coaches also asked their forwards to back away from the goal front, where the Wasps were parking the bus, and thus create more room to create chances in the circle.

Those tactics paid off with second-half goals by Olivia Campbell and Sarah Heath.

“We made good adjustments at the half and executed the game we wanted to execute,” Stetson said.

And, she said, the back line of Peyton Vincent in the middle and Natalie Chase and Natalie Adams on the flanks once again did its job.

She noted Woodstock received no penalty corners; dangerous Wasp forwards Lily Gubbins and Norah Harper at times got past one defender, but help was always there; and the Eagle trio did a good job of triggering transition while working with midfielders Madison Gile, Molly Laurent and Carly Rougier.

“Kudos to my defense. No penalty corners. They did an excellent job settling the ball, composing it, and then going out on the break,” Stetsons said.

Woodstock’s persistent fouling might have also thrown the Eagles off their game, as the contest lacked flow in the first half. Still, Gile and Heath put dangerous shots on Emery.

The Wasp goalie in particular came up big midway through the second period. On a corner Emery stopped an initial outside shot from Morgan Barnard, and then denied both Heath and Txuxa Konczal from point-blank at the right post on rebounds. 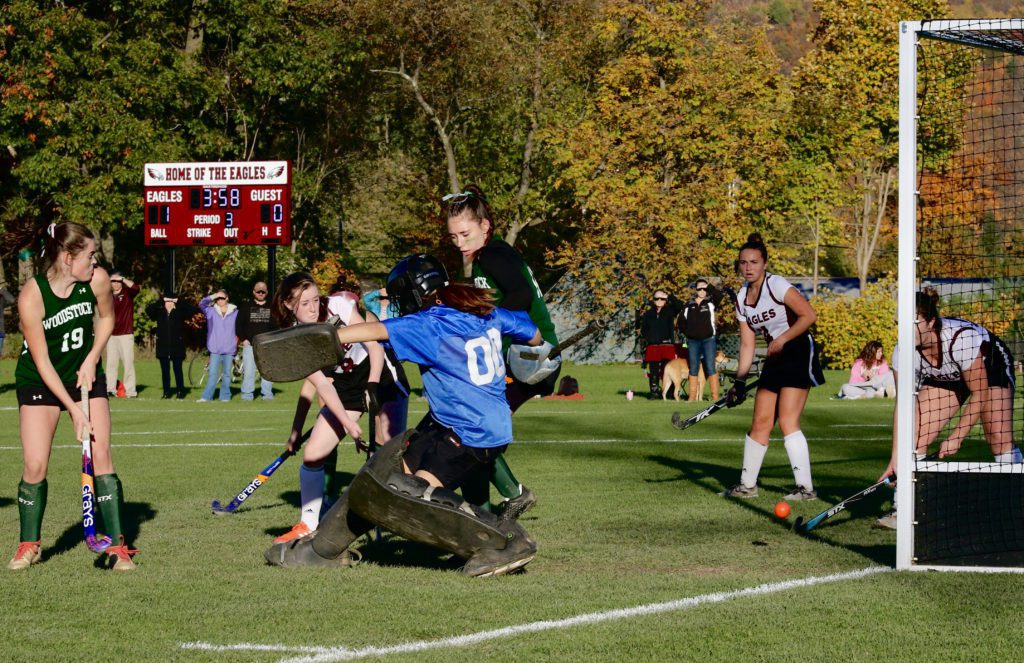 EAGLE FORWARD SARAH Heath redirects a Madison Gile drive home for the insurance goal in the third period on Friday in Mount Abe’s 2-0 quarterfinal field hockey victory over No. 8 Woodstock. Next up for the top-seeded Eagles is a Wednesday D-II semifinal vs. No. 5 Spaulding at 3:30 p.m.
Independent photo/Steve James

In the second half the Eagles broke through at 5:51 of the third period. On a corner, good work by Gile and Konczal forced a scramble in front of the Wasp goal, and Campbell tucked the ball home.

Heath got the second goal two minutes later on another corner. Gile controlled near the stroke line and carried about 10 feet to her right before firing back toward the far corner. Heath got her stick on the ball to tip it in to the cage’s left side.

The Wasps got the ball into the Eagle circle only twice in the entire second half, both in the fourth quarter. At about the eight-minute mark Vincent and Adams teamed up to break up a play and clear the ball, and Donaldson kicked the ball out at about 3:30. A little later Gubbins tried to carry in, but Vincent picked her pocket. 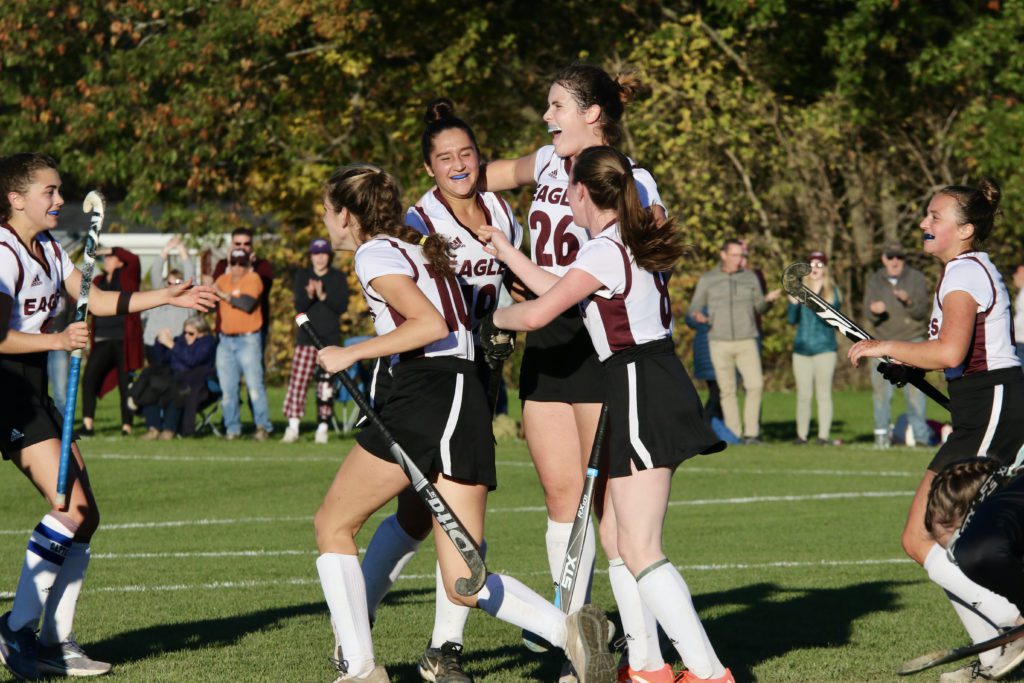 EAGLE FORWARD OLIVIA Campbell, No. 26, and her teammates celebrate her go-ahead goal in the third quarter of their 2-0 victory over visiting No. 8 Woodstock on Friday in a Division II quarterfinal. The top-seeded Eagles will host No. 5 Spaulding on Wednesday at 3:30 p.m. in a semifinal.
Independent photo/Steve James

Stetson expects the competition to get tougher, and said she and the Eagles will review self-correcting a little more quickly after slow starts.

“The discussion is to come out and make adjustments in-game. You can’t wait 15 minutes for it to happen,” Stetson said. “How to talk to one another and be able to make those adjustments is what we’re going to talk about.”