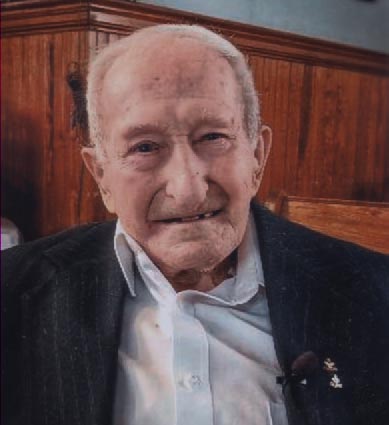 As a young child Bill started living with his grandfather William York and his step grandmother Emma. They lived on a small farm in West Lincoln and he went to the local one-room schoolhouse. Often on Saturday nights he and a friend would walk to Bristol to catch a movie. In 1928, Bill got his first car, a 1927 Pontiac.

In 1927 they got electricity installed on the farm and that led Bill to pursue a career in the electrical field. In 1936, Bill began working for Central Vermont Public Service (now GMP) part time. In 1938-1939 he helped rebuild the dam at Rocky Dale in Bristol. May of 1940, Bill started working full time in Middlebury for CVPS where he got to be a first class line worker. In 1955, Bill became the district representative for the Bristol area, which he held until his retirement in 1974.

In September of 1945 while at a barn dance in Monkton, Bill met a girl there named Mabel Lucia who became the love of his life and they were married on that New Year’s Eve in Burlington. They spent their honeymoon in Montreal. Together they raised four children, built their new home with the help of Bill’s dad, and lived life to the fullest until Mabel passed away in July of 2009. Bill and Mabel were married for 63 years. They were able to celebrate their 50th and 63rd anniversaries together.

Bill used to enjoy meeting up with his buddies at Snaps Restaurant in Bristol, always found time to visit his dear old late friends Sam McKennon and Hap Smith. He also had a wonderful friendship with his dear late friends George Smith, who Bill missed after George passed away.

He was well known for being in several television commercials for a car company, where his famous line was, “You nasty old used car salesman’, along with his funny, devilish laugh.

Bill was predeceased by his wonderful wife, Mabel, a brother Harry James, three half brothers, Clarence, Marshall and Herbert Parker, his grandson Michael Vermillion and his cat ,Buddy, who was the best companion to Bill.

Bill and his family would like to thank everyone who helped to make his final years enjoyable, especially the wonderful nurses and staff at Addison County Home Health and Hospice, his good friend Wilma Hallock and all of his other close friends and family.

Funeral services will be held at 11 a.m. on Saturday, October 30, at Bristol Federated Church with a burial following at Greenwood Cemetery in Bristol. (Masks will be required at service regardless of vaccination status.) In lieu of flowers donations can be made to Addison County Home Health and Hospice, PO Box 754, Middlebury, VT 05753, or to the charity of your choice.

To send online condolences to his family, or for those who can’t attend the funeral service, watch the video of the service which will be at www.brownmcclayfuneralhomes.com.