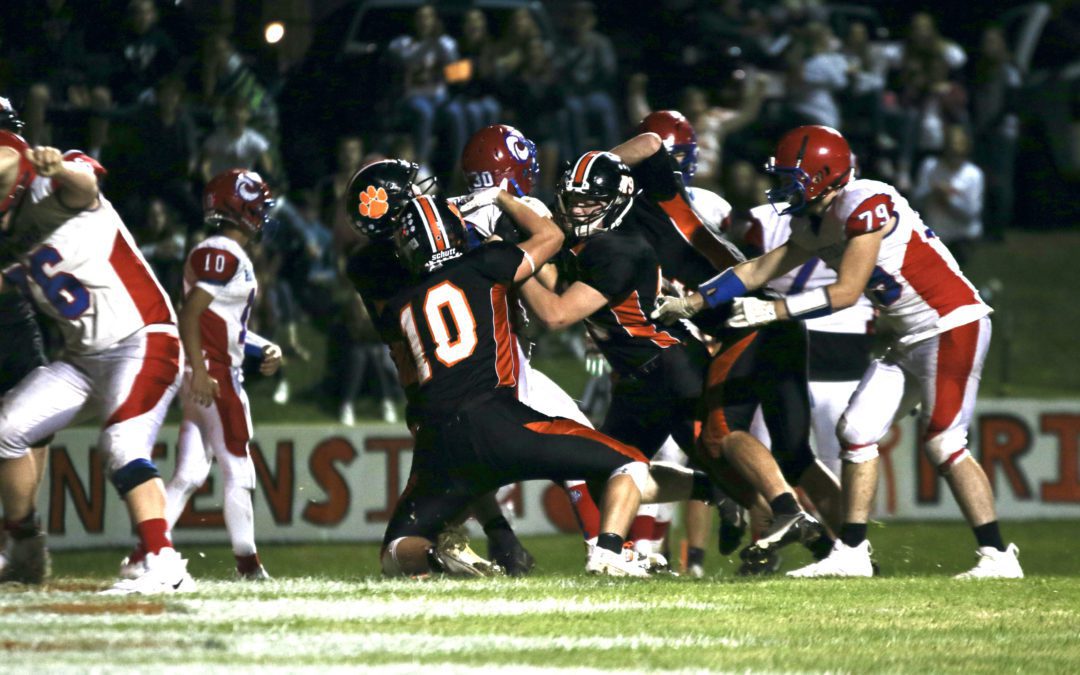 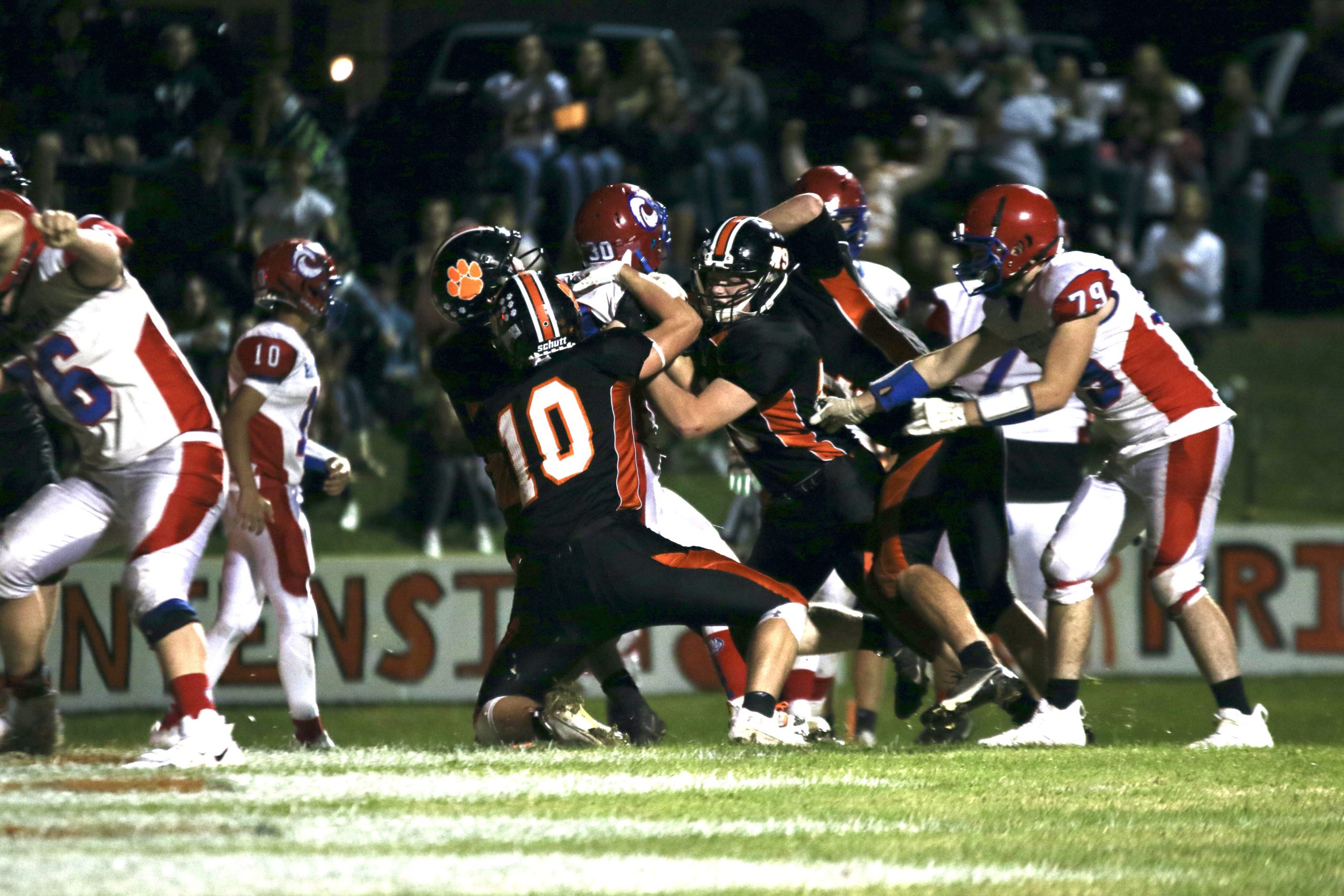 THE TIGERS, INCLUDING junior defensive end Penn Riney (#10) swarm Hartford back Trenton Bird in the end zone for a crucial safety during their 15-7 home victory on Friday night. MUHS will host undefeated Rutland this Friday. Independent photo/Steve James

MIDDLEBURY — The Middlebury Union High School football team thrust itself back into the middle of the Division I title discussion on Friday, when the Tigers knocked off previously unbeaten Hartford, 15-7. Both teams are now 3-1.

Friday’s solid all-around effort, which was capped by a two-touchdown fourth quarter, followed a dispiriting loss at BFA-St. Albans the week before in which the Tigers turned the ball over six times.

The Tigers also had to shrug off adversity during Friday’s game when they fumbled on the Hartford 1-yard line late in the first half while trailing, 7-0. And senior starting quarterback Ryan Thomas-Danyow and two defensive linemen sat out due to injuries.

Critically, said Head Coach Dennis Smith, the Tigers didn’t hang their heads after that crucial fumble. They swarmed to force a Hartford safety to enter halftime on a high note, and then dominated the second half, holding the Hurricanes to one first down until a desperation drive in the final minute.

“It didn’t snowball into a big problem like it did last week,” Smith said. “They didn’t get their heads down, and we went to halftime feeling good.”

Smith also said he felt positive before the game because the Tigers had responded well after the subpar effort the week before, and the coaching staff and the team also believed in the streamlined game plan put in place tailored to sophomore Jackson Gillett, making his first start.

“These kids worked hard all week. We were down three starters, two defensive tackles and our quarterback. We just brought our playbook in, made it simple,” Smith said. “Tonight we warmed up, and I had a good vibe.”

Still, the Hurricanes took the open kickoff and moved 67 yards before missing a 35-yard field goal. And after the Tigers quickly went three-and-out and punted to the Hartford 45, the Hurricanes marched again and took the lead.

A couple tough runs from Brady Tyburski, a key third-down completion from QB Brayden Trombly to wideout Jacob Seaver, and an 18-yard run from Ezra Mock combined with a Tiger penalty moved Hartford to the Tiger 4 as the quarter ended. Three plays into the second quarter, Trombly snuck in from the one, the kick was good, and Hartford was up, 7-0.

Then the Tiger offense began to click. Strong running from Gillett and fellow sophomore Gavin McNulty moved MUHS 76 yards to the Hurricane 1. Then came the fumble that allowed Hurricane linebacker Cole Withington to fall on the ball on the 3 at 2:56.

But two Hartford penalties moved the ball back to the 1, and the Tigers attacked a Hartford running play. Defensive lineman Matt Kiernan was first to hit ballcarrier Trenton Bird two yards deep in the end zone, and three other Tigers joined him to bring Bird down for the two-point safey. The score stood at 7-2 at the half, although the Tigers threatened late in the second period.

The Tigers began to charge in the third quarter, although their opening drive stalled after 63 yards when a fourth-and-four pass fell incomplete, allowing Hartford to take over on its 13.

The teams exchanged fruitless possessions, and when the Hurricanes failed to move to open the fourth quarter they punted to the Tiger 30. Then Brian Austin-Neil attacked the right side of the Hartford line, cut back across the middle, eluded the safety and broke into the clear. Tyburski brought him down from behind 65 yards later on the Tiger 5.

On the next play Gillett lofted a strike to tight end Penn Riley in the back right corner of the end zone. The two-point try failed, and it was 8-7 at 9:14 of the fourth.

The Tigers stuffed Hartford again and got the ball back on their own 26 and promptly put the game away with an 11-play drive that produced a McNulty 6-yard scoring run at 1:28. Nicolai Luksch’s point after made it 15-7.

Trombly completed three passes in the final 1:16 for 35 yards and scrambled for 10 yards as the Hurricanes reached the Tiger 32 with 27 seconds left, but back-to-back sacks by the defensive ends, Riney and Sam Warren, ended the last-gasp threat.

The Tigers held Hartford to 88 yards rushing on 28 attempts. Potter (five attempts) and Tyburski (nine) each rushed for 33 yards. Trombly completed five of 12 passes for 50 yards.

The Tigers will host undefeated Rutland this coming Friday at 7 p.m., and will look for more of the same.

“We held tough, and a lot of kids made good plays tonight, offensively and defensively,” Smith said. “Tonight, everything clicked.”