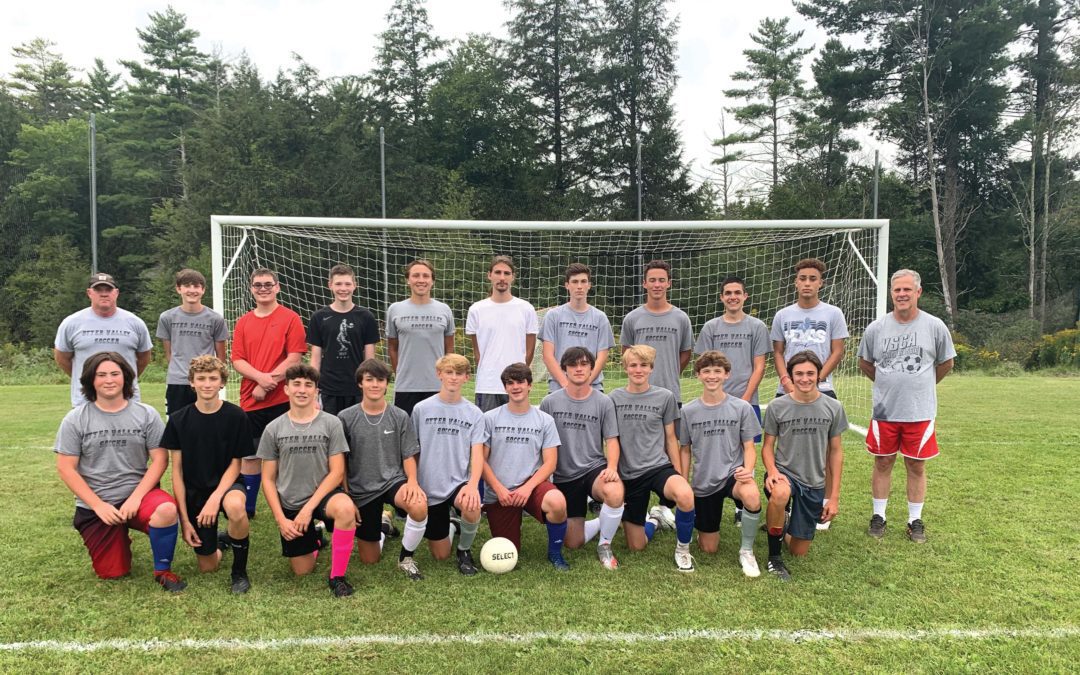 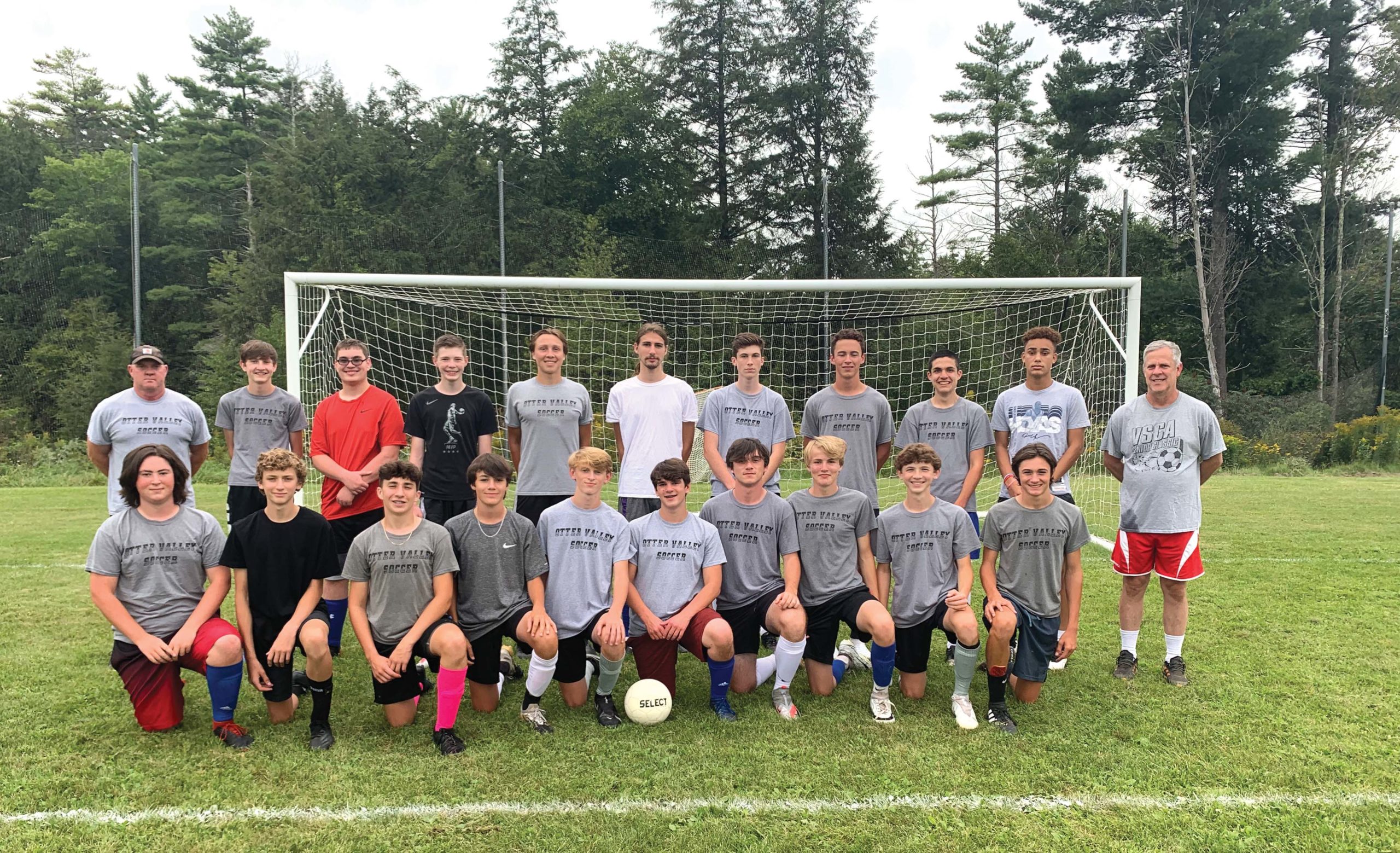 BRANDON –– School is back in session at Otter Valley Union High School, and so are fall sports. At OV, that includes girls’ and boys’ soccer, field hockey, football, cross-country running and golf.

Coaches and athletes have set goals as they move forward in the season.

Field hockey won its first game this season –– 6-0 against Brattleboro in Brandon on Sept. 4, with Lily Morgan in goal for her second year starting.

The Otters highlighted what should be a balanced attack this fall: Riley Keith and Brittney Jackson knocked in two goals apiece, and Alice Keith and Mackenzie McKay each scored once.

“It was a really great game for us,” said Coach Jodie Keith. “Defense saw little play on their end of the field, but Marissa Connors was the anchor of the defense when play was down in their territory.”

The Otters followed that up with a 3-2 road win at Division II rival Woodstock.

Jackson (assisted by McKay), Alice Keith (assisted by Ryleigh LaPorte and scored on a penalty corner) and LaPorte unassisted, put the goals on the board, and Morgan made seven saves.

Coach Keith was again happy with the team’s effort. “It was a really good game for everyone.  Offense worked hard to keep the ball in the circle, midfielders hustled to help offense and quickly get back to play defense when needed, and defense did well moving the ball out of the circle.”

Overall, Coach Keith said she was optimistic about a team that features senior tri-captains Connors, Alice Keith and Riley Keith, all of whom played against Mount Abraham in the 2019 title game.

“We have a really strong team this year with six seniors returning. Everyone is excited to be back playing a full schedule of games this season,” Keith said. “The team is working really hard every day and wants to get back to the state championship this year.”

“We’re a young team and our goal is to make the playoffs,” Coach Denis said. “We came up one game short of championships two years ago.”

The Otters started on the right foot, rolling to a 34-6 victory at Missisquoi in its D-III opener. OV QB Luca Polli threw for 129 yards and three touchdowns to help spark the win. The Otters showed offensive versatility; on the ground, Robert Hutchins broke loose for a 79-yard score, and Keevon Parks ran 11 times for 64 yards and another touchdown.

The Otters played well in the 7v7 touch football during the COVID season a year ago, which consisted of nothing but passing plays and allowed Polli to develop his passing game, but Coach Denis said the program is happy to return to 11-man football with full contact.

“We’re just grateful to play tackle, not tag,” he said.

If the Otters keep working hard, Denis said the program could attain its playoff goals.

“We’ll get better each game and go from there. It rides upon them, that’s for sure,” he said.

In his first year as OV cross-country coach, Cameron Perta said he hopes to build the program.

Perta also wants to focus on “establishing good goals for each individual on the team. Goals that each athlete is able to build from moving forward.”

Three of the top five runners who led the Otter boys to a fifth-place finish in D-III this past fall graduated, but sophomores Dillon Ladd and Baker LaRock return after running for OV at the state meet in Thetford.

OV fielded a non-scoring team of four female runners at Thetford in 2020. Two of those runners are back, and they are the cross-country team captains this fall, juniors Kelsey Adams and Zoe Elliott.

“These two have been helpful on the course and at practice helping the less experienced golfers get better,” Hughes said. “Thomas is a dual sport athlete, so Matt has been an integral part to our team in the preseason so far.”

Of the other athletes, the coach notes young-yet-experienced golfer Lucas Politano is someone to follow.

On the female side, the team has one returning player, Elena Politano, who went to the D-II state tournament last year with her sister Mia, who graduated this past spring. Politano is also a dual-sport athlete this fall as a member of the girls’ soccer team.

“Our hope this year is to make it to states as a team in both the male and female divisions and bring some wins home as well as continue to improve as golfers,” Hughes said.

The Otters got off to a good start, as the boys won at Rutland in their first match by shooting a collective 187 with Thomas Politano’s 40 over nine holes leading the way.

“The team may be young, but it shows lots of promise,” Blanchard said. “The girls have been working hard to refine their skills, get back into shape and most importantly,  play as a team.”

The Otters took their lumps in the early going, with losses to strong sides Proctor and Black River — in Black River’s season-opening tournament — and then to Woodstock in their home opener.

Coach Dick Williams said his team has an even split of experience — seven seniors and three juniors — and youth — nine sophomores and freshman.

He called his seniors “a decent core” to build on, and said his freshmen and sophomores “have some skill, and quite a bit of potential.”

The Otters got off to a respectable start, a big win at home over West Rutland and then a 0-0 tie at Proctor in which they outshot their hosts, 17-8. Williams acknowledged the road ahead will get tougher,

“We won our opener and needed to win the game against Proctor as we don’t have easier games on the schedule,” he said.

Coach Williams said how well the midfielders click together and whether Cifone can continue to work well with Kieran Williams to create and finish chances will go a long way to determine how well the Otters do this fall.

“Now we need to work on finishing,” the coach said.