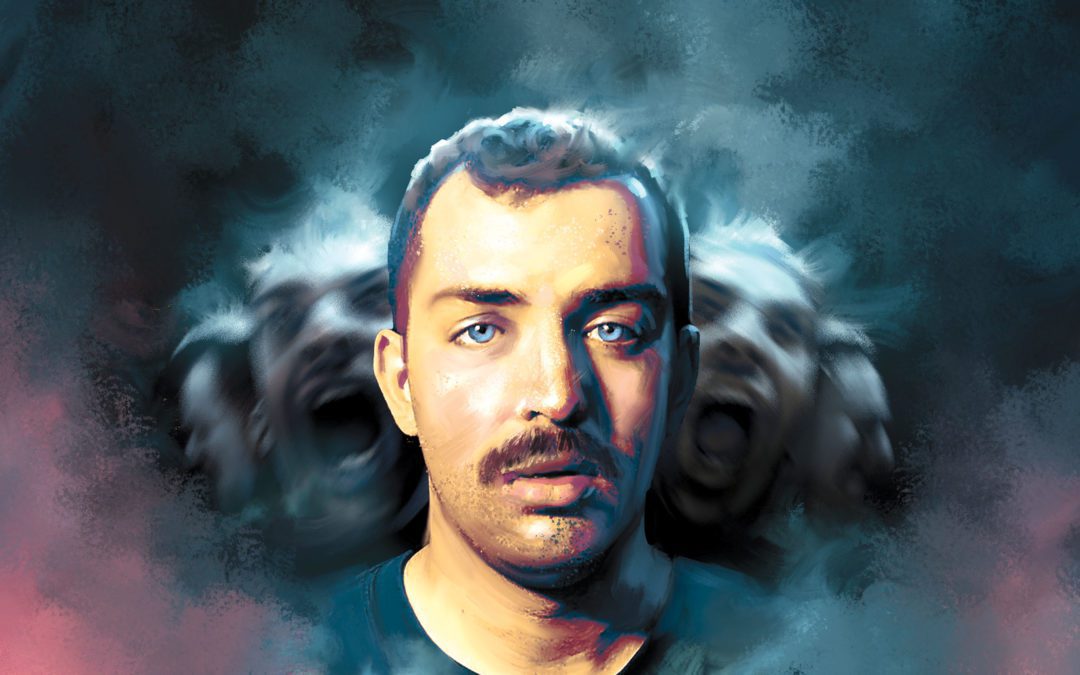 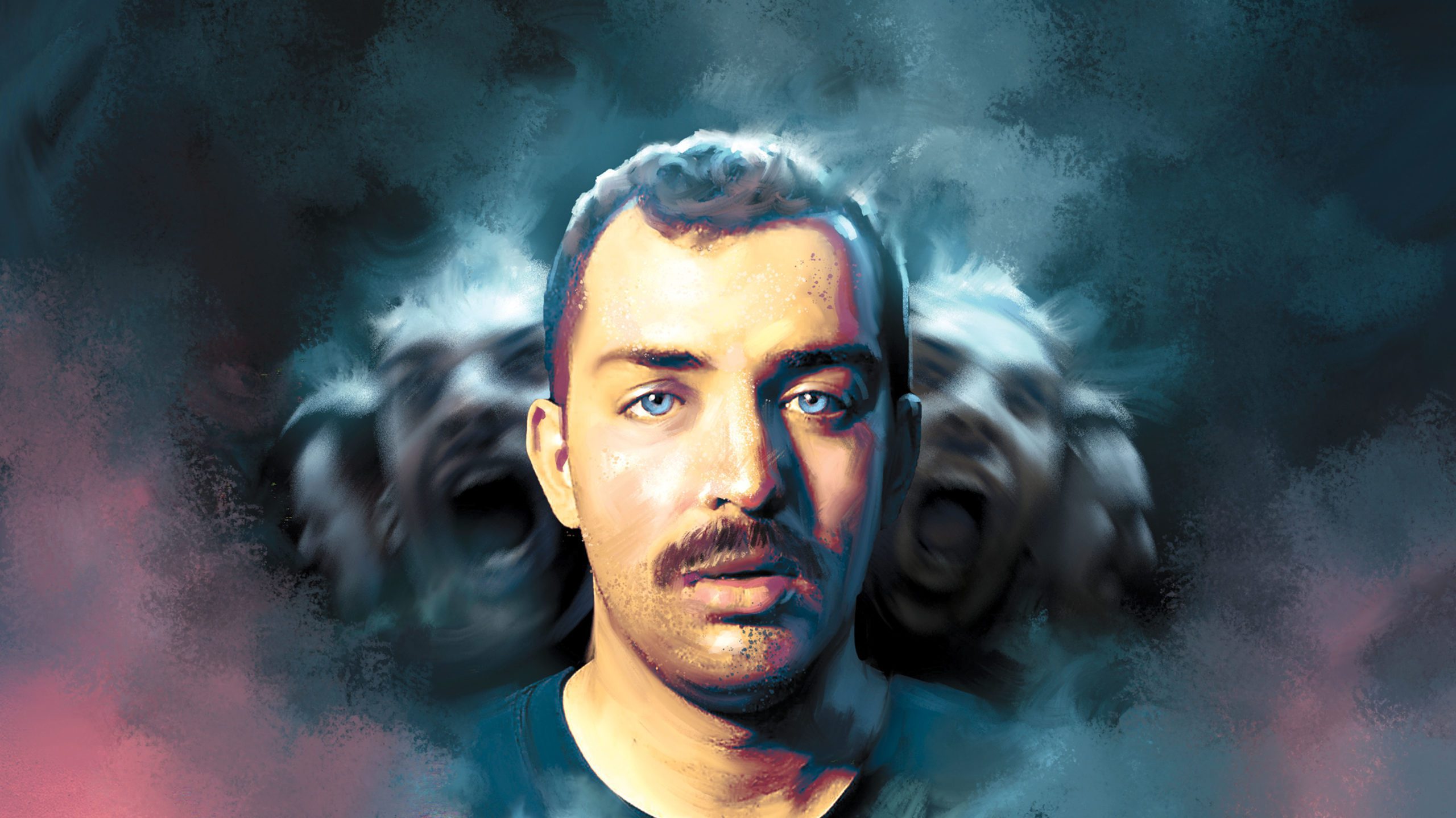 RIPTON NATIVE CODY McGlashan is more than halfway through a Kickstarter campaign, raising funds to make “Gary Screams for You” — “A film about a very freaky man and his very scary compulsion to scream at strangers in the wee hours of the night.” Eben Schumacher, also of Ripton, designed the film’s poster and concept art.

Cody McGlashan signed up for a weight loss study with Harvard just before COVID took hold in the spring of 2020. The basic idea of the study was to live isolated with a community of people in the woods for three months and lose 40 pounds, then collect your $10,000 and go about your life. Sounds like some reality TV show with way too many seasons.

No, McGlashan wasn’t on a reality show, but over those three months, he did write a screenplay — “Gary Screams for You.”

“At first it was about this goofy guy hiding in the bushes screaming at people,” explained McGlashan, a Ripton native and Middlebury Union High School graduate, from his studio apartment in Chicago. “It was a sort of mockumentary of psychosis” — something that McGlashan said he knows a thing or two about.

“Right after graduating MUHS, I went to the University of North Carolina School of the Arts, but had to stop to take care of my mental health,” he explained. “I went through a series of institutions and hospitalization programs… and it took me a few years to figure out what was going on.”

McGlashan’s screenplay is what he calls “a meditation of psychosis.”

“I don’t hide in the bushes and scream at people,” clarified McGlashan, who wrote, directs and stars in this short film. “I’m trying to reach people who experience stress, people who want to scream in public. There’s this very primal need to express ourselves in extreme ways sometimes. It’s a fantasy.”

“‘Gary Screams for You’ is a film about Gary, an undiagnosed, unmedicated bipolar guy, who experiences his first manic and psychotic episode and how it changes the world around him,” reads a synopsis of the short film on the Kickstarter site. “[The film] is equal parts psychedelic noir and mental health comedy. It is a lifestyle, an entity, a cathartic virus infecting those who take part in it and allowing them to become a part of its healing experience. It’s a Chicago story, deeply enshrined in the enigmatic labyrinth-like locales and colorful tensions of this wild city.”

From early in 2020, McGlashan, who earned his BFA in acting from The Theatre School at DePaul University in 2019, has been working and re-working this piece along with a team of coworkers and supporters. Just this month he is wrapping up a Kickstarter campaign to fund and finish “Gary Screams for You.”

“Your support means all of the preproduction and brainstorming meetings, location scouting, insurance buying, writing, re-writing, money spent, production companies founded, costume hunting, rental company calls, etc., etc., etc. and quite literally hundreds (if not thousands) of hours that have been put into this 15-minute film will go to good use,” McGlashan explains to his Kickstarter backers on the fundraising site.

Reaching the goal means that McGlashan will be able to reimburse himself the funds he’s put in personally (upwards of $6,000), and execute the plans to make this “short film as good as we can with the best camera equipment and people.”

McGlashan hopes to begin shooting the film in October and then submit it for film festival season next year. Beyond that, his dream is to see this short film developed into a full-length feature.

“Since I was a kid, I’ve always wanted to make movies/cinema,” McGlashan remembered. “This makes me feel aligned. It’s healing. It’s fruitful… and it helps that other people are excited about it too.

The cherry-on-top for this short film is its authenticity.

“‘Gary Screams for You’ is a film about a neuro-diverse experience made by a team of neuro-diverse individuals,” the Kickstarter page explains. “By supporting the film, you allow a filmmaker who has undergone the psychotic experience to take narrative control and help end the stigmatization of said experiences. [This film] is open communication to a community that is rarely catered to and will also allow us to communicate this experience to a general audience with daring cinematic vocabulary.”

With this factor of elegant realism, McGlashan hasn’t lost sight of the mass appeal of cinema: “It is entertainment,” he said. “My goal is to make stories that transform lives and to make mass cinema.”

“Although we can share in Gary’s suffering, we’re not invalidating the inherent comedy of the psychotic experience by babying the wound, so to speak,” McGlashan’s Kickstarter page continues. “Instead, we are revealing the inner workings of a delusion from the ground up, warts and all, and asking you to share in his experience. And by all means, you will be wildly entertained.”