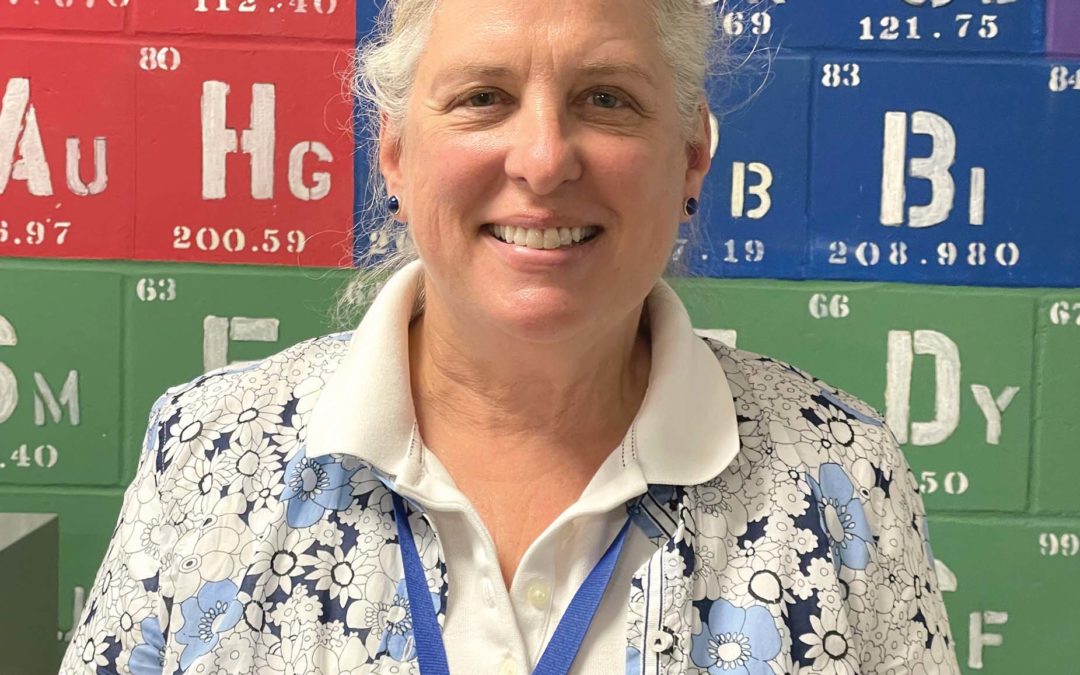 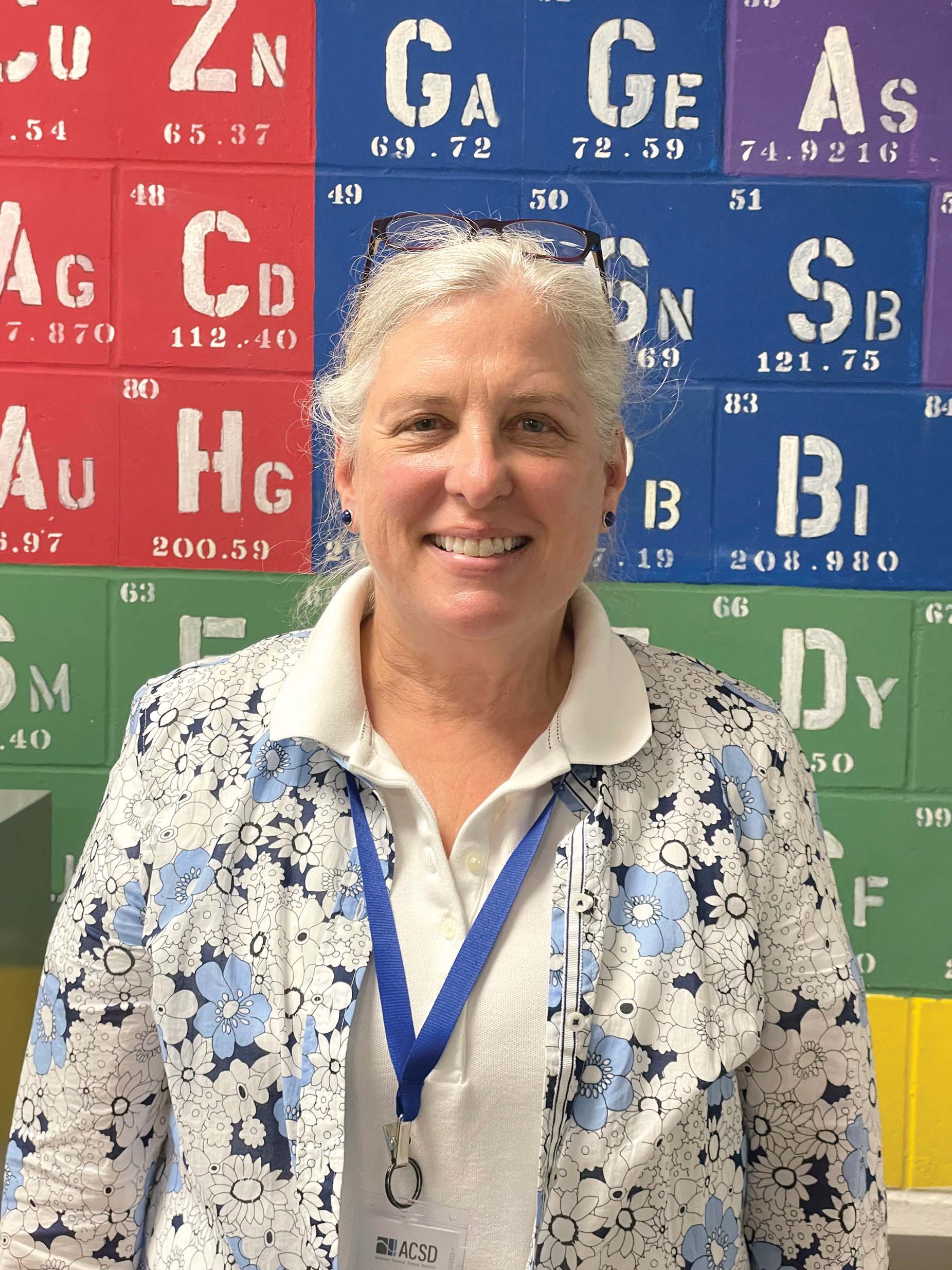 I tell my students, ‘It’s not about the grade, it’s about the learning.'
— Cindy Atkins

MIDDLEBURY — Cindy Atkins is a person with special skills.

Not many people, after all, can recite the periodic table of elements and dribble two basketballs at the same time.

Well, Atkins is ready to “slow her roll” after 34 years as a science educator at Middlebury Union High School. She’s stepping down as chemistry teacher, but you’ll still catch glimpses of her at MUHS, where she’ll serve as a part-time International Baccalaureate (IB) Diploma Program coordinator for grades 11 and 12.

You’ll also likely see her at local basketball games, either as a coach or an avid spectator.

“I love what I’m doing, and I can’t completely retire,” she said during a recent interview.

Atkins was born and raised in Middlebury, where she, of course, attended — and graduated from — MUHS. If anyone bleeds Tiger orange and black, it’s Atkins. She entered what was a combined Middlebury Union Middle/High School building on Charles Avenue for the first time during the fall of 1972, as an 11-year-old seventh-grader.

This means she’s roamed the halls of MUHS for more than 40 years as either a student or teacher. Atkins took a nine-year breather — for college and self-discovery — from her alma mater between her graduation in 1978 and her return as an educator in 1987.

She attended the University of Vermont, and loved it there.

“I always had a passion for the sciences and for art,” she said. “I was really uncertain what I wanted to major in.”

Rather than agonize over the decision while paying tuition, Atkins took time off here and there.

The interruptions were certainly worth it, on a personal level.

She met her future husband (Jerry) while playing in a Middlebury men’s hoop league. They got married and started a family, whereupon Atkins decided to complete her UVM studies and then join the workforce.

Little did she know that her workplace would become her former learning place, where she would return the favor many times over to hundreds of students.

Her first teaching assignments were in the subjects of “Man in his Environment,” biology, and lab biology, before settling into her wheelhouse: Chemistry. And in 1991, she became MUHS’s only chemistry teacher for grades 11 and 12.

“Chemistry is such a great science to teach and to study,” she said. “It’s abstract — which some people find challenging — but there’s critical thinking involved, mathematical problem-solving involved. There’s also the excitement of lab experiments and getting to observe reactions and outcomes. It’s a very active science, and I guess that’s why I enjoy it so much.”

Atkins has taught all levels of chemistry, and spent the past two years designing MUHS’s IB Diploma Program for chemistry.

She’s refined her teaching over the years, thanks to technological advances and a solid work ethic. She and her students can now access precise data, available with a few keystrokes on the computer. During her early years of teaching, students had to graph their scientific findings by hand. Now they do it easily through Excel computer software. There are now online textbooks and a wealth of online seminars and support materials for those studying chemistry.

Atkins has always taken teaching very seriously, and one of her priorities has been to provide her students with the resources they need to understand what they’re being taught.

“I have put a lot of energy for many years into creating my own website that is up to date and useful for parents,” Atkins said of tinyurl.com/zpdjvhbf, which contains extra support materials and homework assignments, among other things.

Atkins is proud to say some of her former students have pursued careers in chemistry-heavy fields. Her alums include many physicians, engineers and medical research scientists.

“It’s wonderful: I love to hear what past students are doing,” Atkins said.

She played guard for the Tigers in high school.

As a coach, he led the Tiger girls to an unparalleled run of success that culminated in the team’s only state title, in 2004, and a finals appearance in 2005.

“Basketball was always an outlet for me, growing up,” she said. “There’s something about being on the court. Even as a coach, when I’m on the court, everything else about my life disappears. I’m happy on a basketball court; it’s a great game.”

Truth be told, basketball was a major reason Atkins became a teacher.

The year was 1982. She gratefully accepted the job as MUHS JV girls’ hoop coach.

“Basketball gave a lot to me, and I wanted to give back to basketball,” Atkins explained.

She resolved to parlay that post into a larger role with the school.

“It hit me that my love for basketball and science could be wrapped into one experience by becoming an educator,” Atkins said.

This gave her added incentive to finish her studies at UVM. But in the meantime, she got a brief taste (1983-1985) of what it would be like to coach the MUHS varsity girls’ team.

She now acknowledges, in retrospect, that she wasn’t ready to make that leap.

“There’s so much that goes into running a varsity program, behind the scenes, that people aren’t aware of,” said Atkins. “Looking back, it was too much.”

She returned to basketball coaching in 1992 as an MUHS teacher — first with the freshmen girls’ team.

Those were busy times.

“I was raising two young girls and teaching full-time, and I thought, ‘I can handle this much,’” she said.

Atkins advanced up the coaching ranks — around three years guiding the freshmen, a handful of years leading the JV squad, taking over the varsity girls Division I program in 1998.

She made an almost immediate, profound impact, leading the Tigers to that 2004 state title and additional winning seasons. Along the way, she coached both of her daughters, Megan and Jackie.

Atkins gives her all to whatever she takes on. She felt drained by the effort it took to run the varsity program, and bowed out of coaching after the 2005 season. But she was lured back a couple of years later, leading the Tiger girls to a semifinals appearance at the Division II level, before calling it quits.

Why quit coaching when you’re so successful?

Atkins developed and nurtured varsity talent by running an AAU program. Each year. For 12 consecutive years.

“I was coaching 11 months out of the year for 12 years straight,” she said. “That’s how you can build a program, but it takes a lot out of you. There’s a price you’re paying.”

She took last year off from coaching because of COVID.

But don’t expect her to drop the clipboard and whistle anytime soon.

“I’m not sure when I’ll be done with coaching,” she said with a smile. “The satisfaction I get from coaching, in general, is watching kids develop, become better athletes — but more importantly, motivating them to understand the importance of working together as a team. Team is above everything else. And understanding the value of being one piece — but a very important piece, no matter what your role is.”

Asked if she saw any parallels between basketball and chemistry, Atkins briefly thought it over, and, as usual, came up with an answer:

“In basketball, as a coach, I really believe in breaking down skills,” she said. “I have the expectations that athletes understand how they’re using their bodies, so I would break down skills to help them understand what they needed to be doing next. Learning how to set a solid screen. Learning how to develop their outside shot correctly. The parallel is that chemistry can be very complex, but I really work hard breaking it down so everyone can understand it.”

You’d think someone as busy as Atkins would have firm plans for her semi-retirement.

Sure, she’d like to travel some with Jerry. But her current priority?

“To have some time to slow down and enjoy life.”