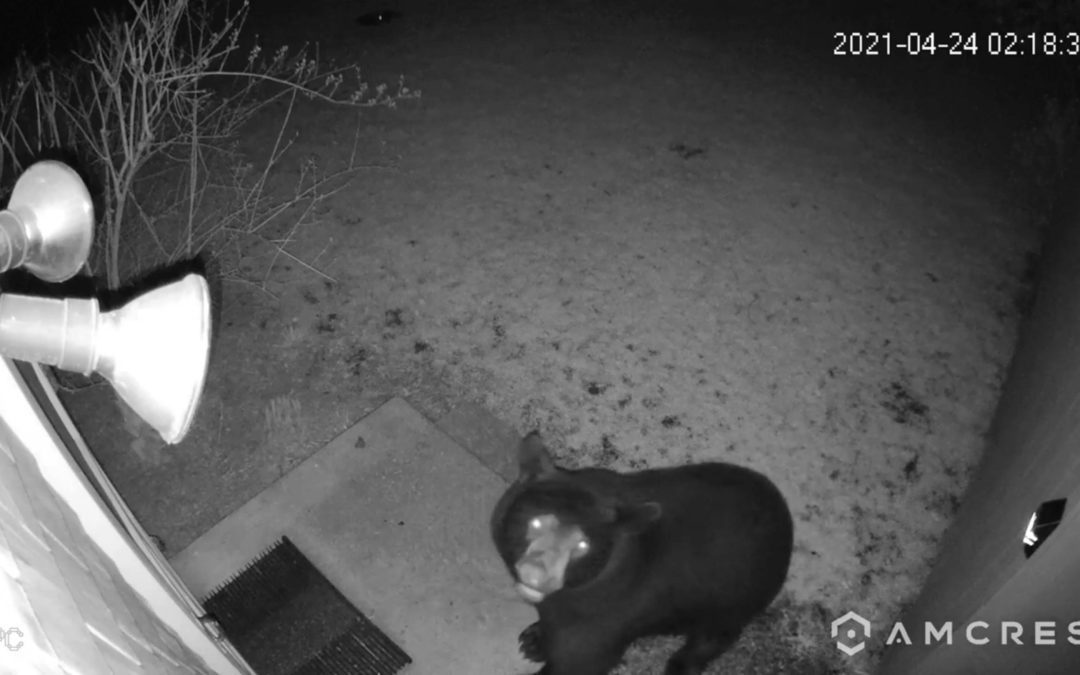 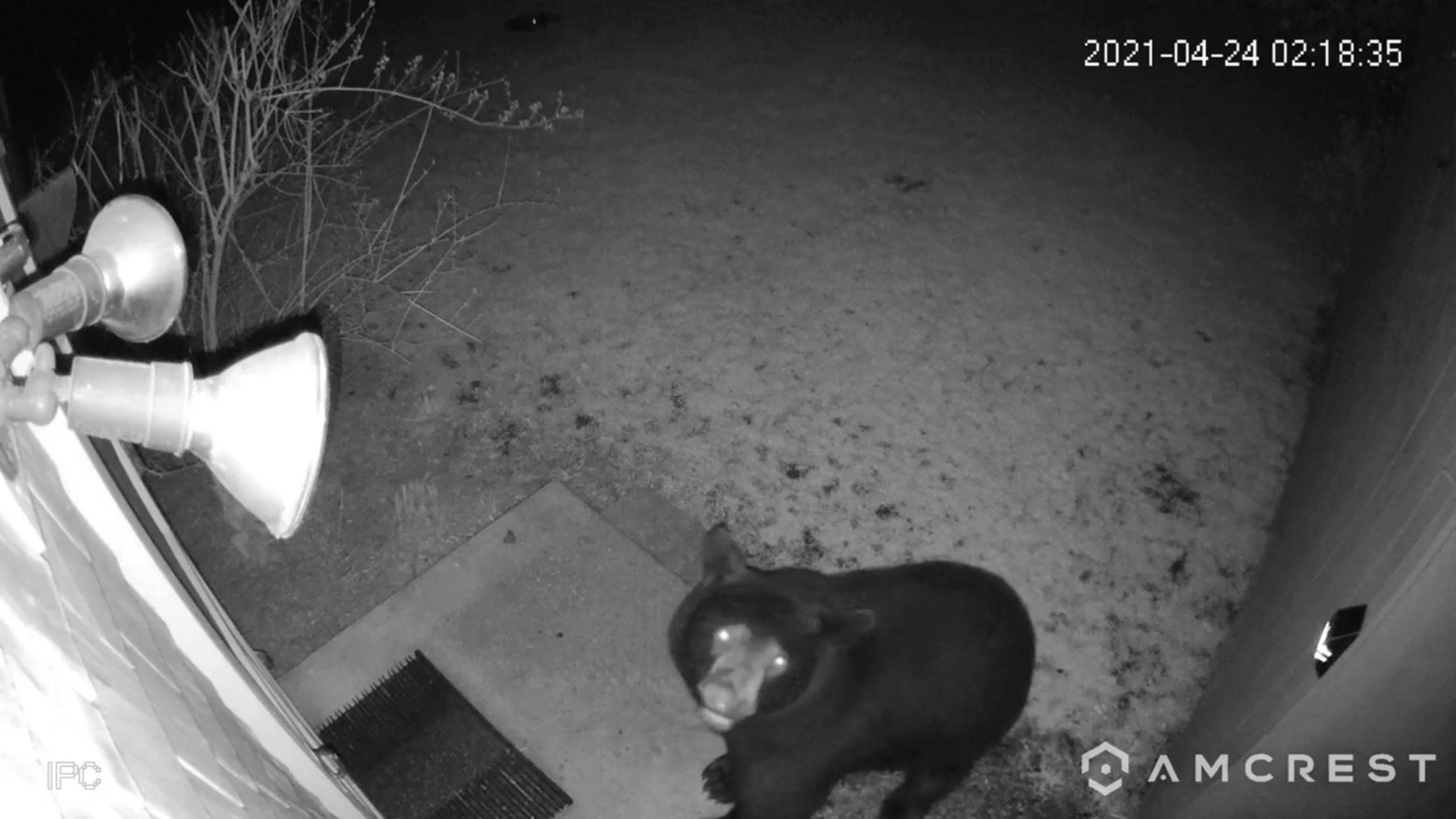 THIS IMAGE FROM a video posted by Robert Davis shows a bear nosing around the yard of his Meadow Lane home in Bristol at around 2 a.m. on April 24. When the animal came back for a repeat performance on April 27, Davis named him “Bennie the Bear” in a second video. See the video online at tinyurl.com/BristolBearBennie.

BRISTOL — A recent report on bear-human interactions is likely finding an interested audience in Bristol and environs, where more than a dozen social media posts last month told tales of bears in town.
Basha Miles reported on Front Porch Forum that a bear had been in the backyard of her West Street home in Bristol.
“I knew when I stepped out onto the front porch that it must have been a bear, because I found the metal container where I keep my birdseed (secure, I thought!) was tipped over and most of the seed was gone,” she wrote late last month. “Then my neighbor noticed that the iron pole that holds up my bird feeder had been bent over … Time to take down those feeders, for sure!”
The Stowe-based organization Protect Our Wildlife recently release a report called “Vermont Black Bears and How to Effectively Manage Conflict.” The report, which can be read online at tinyurl.com/BearsNhumans, is the product of a five-month-long project launched by an Environmental Sciences student at the University of Vermont and was overseen by Protect Our Wildlife.
The report touches on a number of matters from possible reasons why there was such a dramatic increase in bear complaints reported to the Vermont Department of Fish & Wildlife in 2020 to simple things we can each do to prevent bear conflicts from happening in the first place.
The 2020 bear hunt produced a record 921 bears killed, Protect Our Wildlife reported.
“Vermont cannot hunt its way out of black bear conflicts,” said Jennifer Lovett, POW board member. “We have an obligation to learn how to coexist.”
The report cited several theories for an increase in human-bear conflicts, including: more people raising backyard chickens with inadequate protection from wildlife; increased number of people recreating outdoors; increased number of people working from home, which allows for greater exposure to bears on the property; a surge of non-residents moving to Vermont and tourists fleeing urban areas due to COVID-19 (people who may be unfamiliar with bears and their behavior); new mandatory composting laws resulting in improper food waste disposal; camping in proximity to bear habitat; poor garbage management; and leaving bird feeders out too long.
That last reason sounds familiar to Gail Klein of Bristol, who reported a bear sighting on Mountain Terrace in a Front Porch Forum post:
“I woke to a thud and a crash at 4:20 a.m. this morning (April 20) — thinking at first my cat must have knocked something down — only to discover a large bear on my porch trying to knock down one of my feeders! I banged on the door and it briefly stopped then after a second time it walked past my door — and left down the stairs but not without first seeming to give me that long, beautiful stare.
“I was awed by it and unsure but I did go out and bring my feeders in — one is slightly broken — I am actually sad for him that he did not succeed better at anything but breaking the one nice pot the former owners had left me. Only last week I was telling someone about the risk of feeders out in April … and then it’s like I forgot out of the joy of seeing new birds at my feeders (not too many had discovered the ones on the front porch ’til recently). I had hesitated to hang them there not wanting to cause damage but this COVID winter was long and I needed a few visitors on my porch!
“So guess tomorrow I will spread the seeds out on the ground and bring the feeders safely inside…. wishing the bear well yet our neighborhood safe.”
Several 5-Towns residents on FPF reported seeing bears in their yards:
Lynn Wolf, Sherman Lane, New Haven: “Pulled up in my driveway at 2 p.m. to find three spry-looking young bears running away (into the woods) after decimating my compost bin!”
Grey Todd, Dog Team Road, New Haven: “It’s that time of year! We had a bear visit our property last night. Garbage was out for this morning’s pickup, and after making a big mess of that, the bear was very interested in our compost (must have smelled yummy!). It also destroyed our bird feeder.”
Kathy Coakley, Pearson Road, New Haven: “Bear got compost ripped it apart. Got hummingbird feeders; left a mess.”
Carl Sword, Church Street, Bristol: “Thursday morning I saw a bear in our backyard on Church Street. It had knocked down the bird feeder. By the time I got my camera it was gone. I dressed quickly and went out for a walk around the block. I got a glimpse of it again in a back yard on Pleasant Street.”
Brigitta Lawrence, Hermit Thrush Lane, Bristol: “Small, mangy looking bear with red hearts on his feet and paws, and a red bow around his neck was spotted near Liberty Street this morning. Let’s call the game warden!”