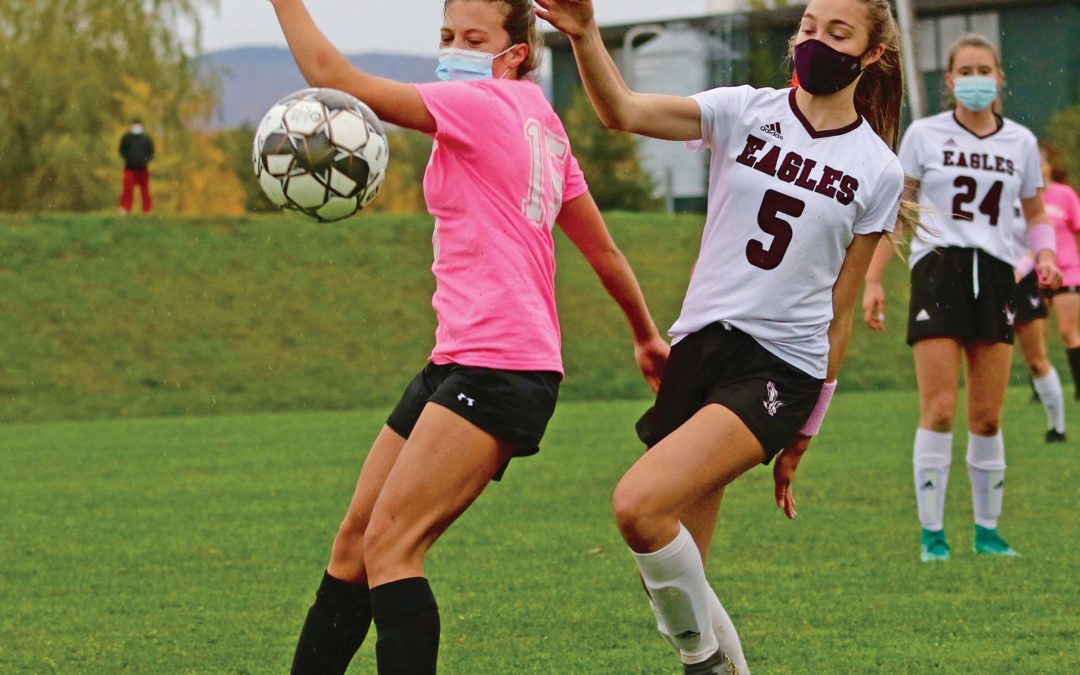 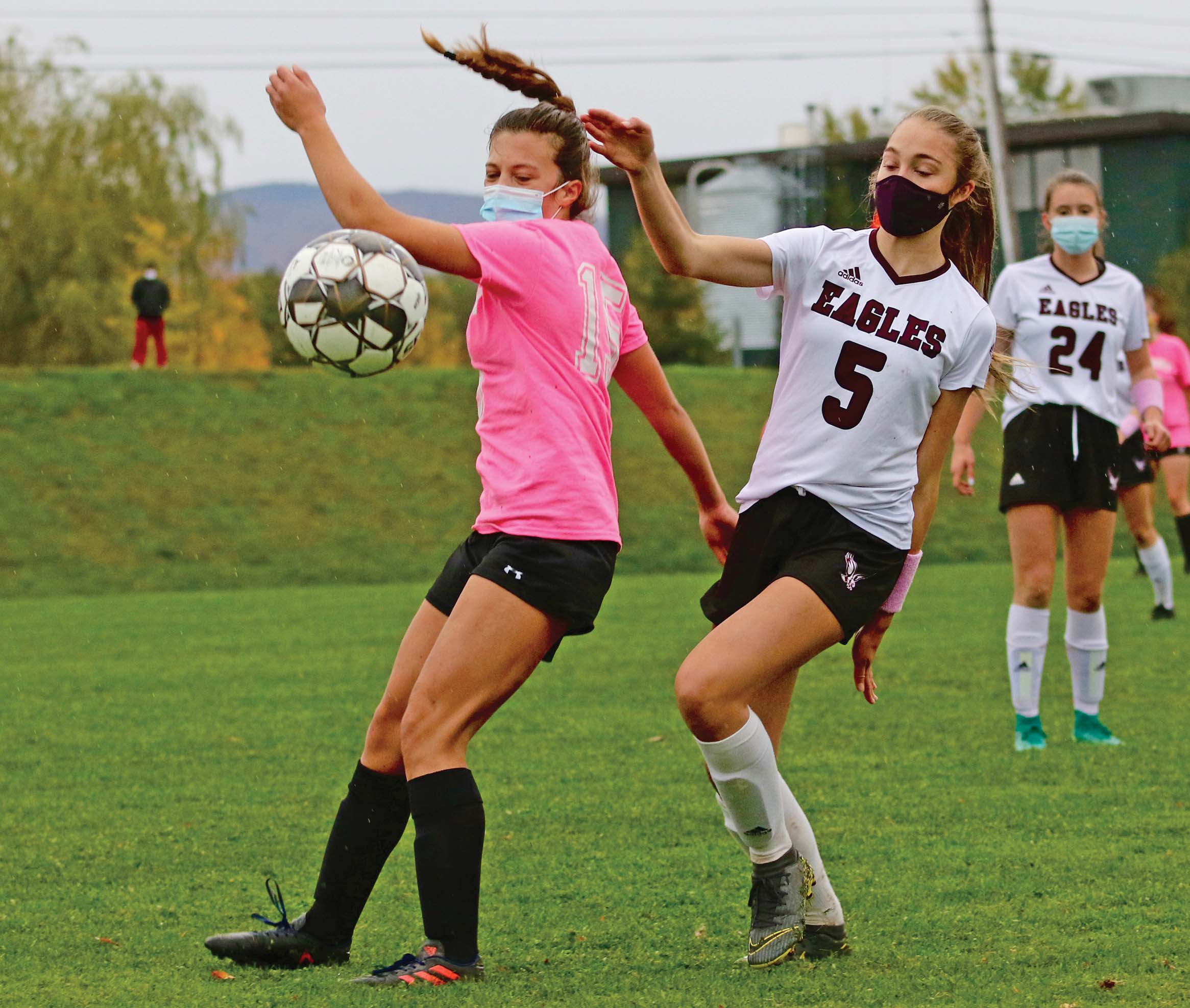 TIGER JUNIOR SOPHIE Larocque (15) tussles for the ball with Mount Abe’s Sadie Thomas, a senior midfielder, in the first half of Friday’s game in Middlebury. The Eagles led by a goal at the half, but Middlebury scored twice in the second to win the local matchup.
By Andy Kirkaldy

MIDDLEBURY — As the second half wore on and the rain kept falling during Friday’s girls’ soccer game in Middlebury, it began to look more and more like Mount Abraham senior Savannah Scrodin’s first-half breakaway goal would hold up as the game-winner.
Truthfully, the Eagles could have had more than what through 65 minutes was the game’s lone score.
Scrodin’s strike came in the 22nd minute, when MUHS goalie Audrey Schnoor could not get a hand on Scrodin’s 12-yard blast into the upper left corner. Mount Abe senior Ellie Ginsburg set up the play, stealing the ball from a Tiger back and sending Scrodin alone into the box.
But two of Schnoor’s three first-half saves (five stops in all) denied Scrodin on similar break-ins. The best of her stops came in the 25th minute, when Schnoor lunged to her right to knock a Scrodin bullet just wide. “She has come up big and kept us in (games),” said MUHS Coach Wendy Leeds.
The Tigers came out of the halftime break and controlled play for about 20 minutes. They outshot the Eagles, 15-11, 8-4 in the second half.
Tiger junior midfielder Ivy Doran hit the crossbar and shot high another time. Sophomore Lia Robinson had a chance set up by Doran, but Eagle goalie Joanna Toy (six saves) made the stop. Two corner kicks also tested the Eagle defense.
Then the Tiger tide ebbed. The Eagles started to connect passes and probe the MUHS back line. It appeared they would pick up their second one-goal win of the COVID-shortened season over the Tigers. After all, MUHS had not scored in its past three outings.
Both coaches later commented on how quickly soccer can change, how one play — especially one that ends with the ball in the net — can shift a game.
“It is so much about momentum, right?” Leeds said. “Nothing builds confidence in your team and in yourself like scoring goals.”
On Friday that play came from the Tigers in the 65th minute, courtesy of sophomore Lily Lapiner and junior Hannah Turner. The ball found Lapiner, about 30 yards out from the left post. She spotted Turner cutting to goal at the top of the box, shielding a defender on her back.
Lapiner led Turner alone into the box. Toy came out to meet her, but Turner, to the left of the penalty stripe, carefully right-footed the ball inside the left post. The game was tied.
And the Tigers began pressing the Eagle defense again. It paid off in the 68th minute. Turner, a midfielder who Leeds moved to striker to spark the attack, won the ball about 30 yards out from the top right of the Eagle box. Turner took a touch and laced a high arching shot that went over the Eagle goalie — and under the crossbar.
Suddenly the Tigers had the lead.
Eagle Coach Dustin Corrigan said he cautioned his team at halftime not to rest easy with its advantage.
“One-nothing is such a fickle lead. Whoever scores that next one, they’ve got all the momentum,” he said. “And that’s a little bit how it worked.”
His team mounted some late pressure. Scrodin got off a long-range shot in the 71st minute that sailed wide, and she and Ginsburg attacked the Tiger box a couple minutes later. Tiger junior back Zoe Noble broke up another threat.
With two minutes left Scrodin sent in a corner kick, but Robinson headed it away. Senior back Mardi Horne headed away another ball, and with a minute left Schnoor came off her line to grab the last Eagle serve. Soon afterward the 1-4-1 Tigers celebrated.
Leeds said she felt the Tigers deserved the win for “the support they give each other” and their hard work to improve their possession play over such a short season.
“It was nice to see them get that result, and I think they played really well. A lot of the things we’ve been working on in practice they’re implementing on the field in games under pressure,” she said.
For the 1-5 Eagles, Corrigan said the move of defenders Scrodin and Ginsburg, the team’s only returning starters, into attacking roles is paying dividends.
“We made some strides today creating chances,” Corrigan said. “In the first half we were looking dangerous, and we had our moments in the second half.”
The rebuilt Eagle defense of juniors Elena Bronson and Sophie Venman in the middle and senior Sadie Thomas and freshman Natalie Atkins on the flanks has also held up well. Coming into Friday the Eagles had allowed just one goal in each of its past three games.
“We’ve figured out how to be very stingy defensively,” Corrigan said.
The Eagles always figured to be in rebuilding mold this season after graduating 10 seniors, most of them starters, and then had to deal with an abbreviated preseason, short season and the pandemic.
Corrigan said despite the lack of results the Eagles are “happy to be playing” and have kept plugging.
“Spirits are pretty good,” he said. “We feel like we can compete with anyone we play. They’ve all been close games.”