Remarkable women: Female moral reform in Addison County in the 1830s and ’40s 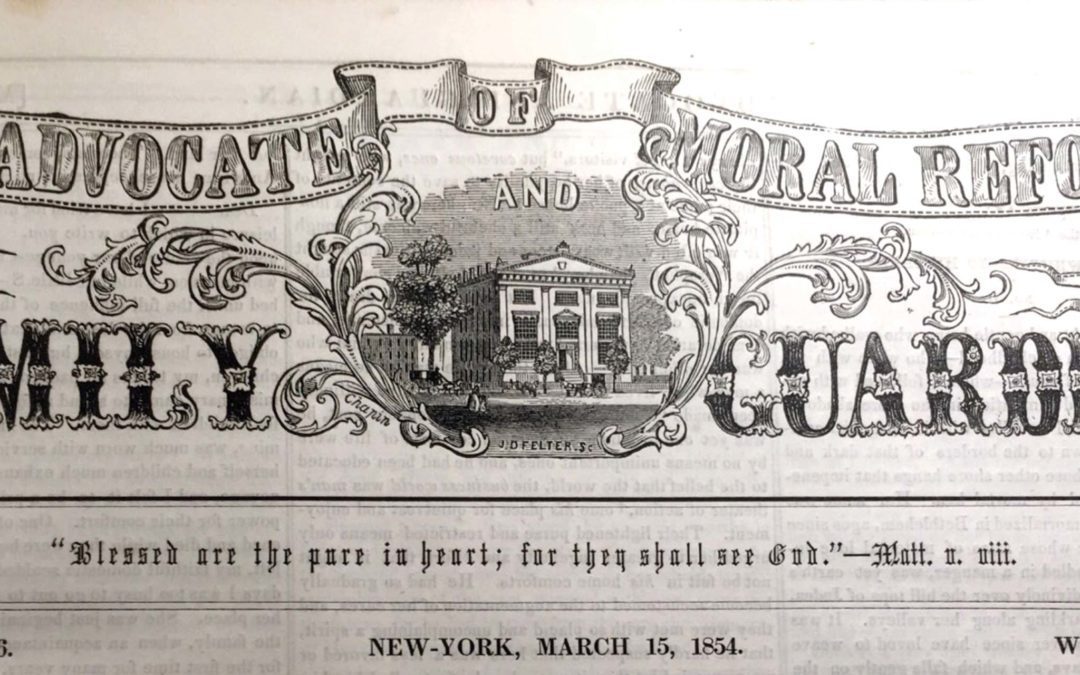 Remarkable women: Female moral reform in Addison County in the 1830s and ’40s

WHAT LITTLE IS known of these female moral reform societies comes from the reports they sent in to the parent society in New York and were published in its paper, The Advocate of Moral Reform.
By Daniel S. Wright

Of the various reform causes that Addison County women supported in the first half of the nineteenth century, there was one that became almost solely a women’s cause. Though moral reform is little known today, compared to temperance and antislavery, it was the first uniquely women’s movement for social change in America. It arose in alarm over a perceived rise in “licentiousness,” be it prostitution, fornication or adultery. In women’s hands, moral reform became a protest against male sexual aggression generally. They sought to expose predators, affirm solidarity with their victims, and equip women with the self-respect necessary to resist them. Though long-forgotten, female moral reform was a precursor of today’s #MeToo movement.
Addison County proved to be fertile ground for the cause. Of the 34 female moral reform societies active in Vermont in the 1830s and ’40s, eight of them were in this county. They were in Chimney Point, Addison, Bridport, Whiting, Vergennes, Ferrisburgh, North Ferrisburgh and Monkton, and comprised a reported total of over 500 members. If we added in the society in Orwell, part of Rutland County at the time, the total would be over 600 women. What little is known of these societies comes from the reports they sent in to the parent society in New York and were published in its paper, The Advocate of Moral Reform.
This region may or may not have been a hot bed of promiscuity, but it was in the throes of rapid economic and social change, evidenced by the opening of the Champlain Canal and the merino sheep craze. Young people were having to make their own way as never before. As they flocked to the cities, to the mill towns, and out West, socializing between the sexes and entering the marriage market became open and unsupervised ventures. This was the situation moral reform responded to. It sought to instill not surveillance but self-control in both sexes, especially women.
The prospect definitely had appeal in Addison County. Reporting an increase of 20 to 70 members in its first year, Hannah Lyman of the Ferrisburgh society wrote in 1838 that “most of the young ladies in the vicinity have come forward and pledged themselves for the support of its principles”; and this, in the face of “much discouragement in the shape of ridicule and apathy.” Yet local leaders were heartened by increasing approval from the wider community. From Bridport, Elizabeth Rice wrote in 1840, “We are assured that a healthful influence has gone out through the instrumentality of this society, and that public opinion is much changed with regard to Moral Reform.”
Besides shunning predators, the American FMRS in New York also proposed exposing the worst of them by name. Moral reformers in Orwell were among those who sent in an accusation: a certain Mr. Morgan set up a dancing school in Shoreham in the fall of 1838, and “caused considerable excitement of late in Orwell and surrounding towns in Vermont.” This “libertine” spent a night with a young woman from Cornwall in an Orwell tavern.
When this strategy of naming names ran into legal challenges, the parent societies in New York and Boston launched a bigger one: a campaign for state laws against seduction and abduction. Intense petitioning in the 1840s led to legislative success in several states, including New York and Massachusetts. In Vermont, Addison County’s moral reformers joined the campaign. For three years starting in 1843, they presented the House of Representatives with petitions “praying for the legal enactment of a statute against seduction,” with hundreds of signatures from Ferrisburgh, Vergennes and Addison County at large.
Unfortunately for the moral reformers, the Vermont legislature refused to act on these petitions. Even where these laws were adopted, very few cases were ever tried. Perhaps this failure is one reason why this reform cause is so little remembered. Another was that female moral reformers were not the radicals that we celebrate in women’s history. They were pious, church-going ladies who valued the support of their pastors. They preferred to speak of woman’s duties, rather than woman’s rights. Nevertheless, their achievements, which were remarkable, and their failures, which still ring true, are worth remembering in this #MeToo era. For their erasure from memory left future generations of women to figure out anew how best to put an end to harassment, abuse and rape, and then to discover anew how hard this is to do.
The Sheldon recently found that it has 10 issues of “The Advocate for Moral Reform” from late 1830s-1840 in its archives.
————————
Author Daniel S. Wright of Weybridge is a retired minister in the United Church of Christ and author of “The First of Causes to Our Sex: The Female Moral Reform Movement in the Antebellum Northeast, 1834-1848.” He produced this piece in response to the Henry Sheldon Museum’s call for nominations of remarkable women of Addison County. This concludes the series of articles about remarkable women in Addison County’s past written by members of the Stewart-Swift Research Center committee of the Henry Sheldon Museum for an upcoming exhibit in honor of the 100th anniversary of the passage of the 19th amendment granting women the right to vote. We are aware that there are many remarkable local women of our present day, notable for rising to the challenges of their times. Who would you nominate for their personal courage, determination, or commitment to others for acknowledgement in the exhibit and why? Let us know their stories at info@henrysheldonmuseum.org.