The Outside Story: Fox talk goes from yips to shrieks 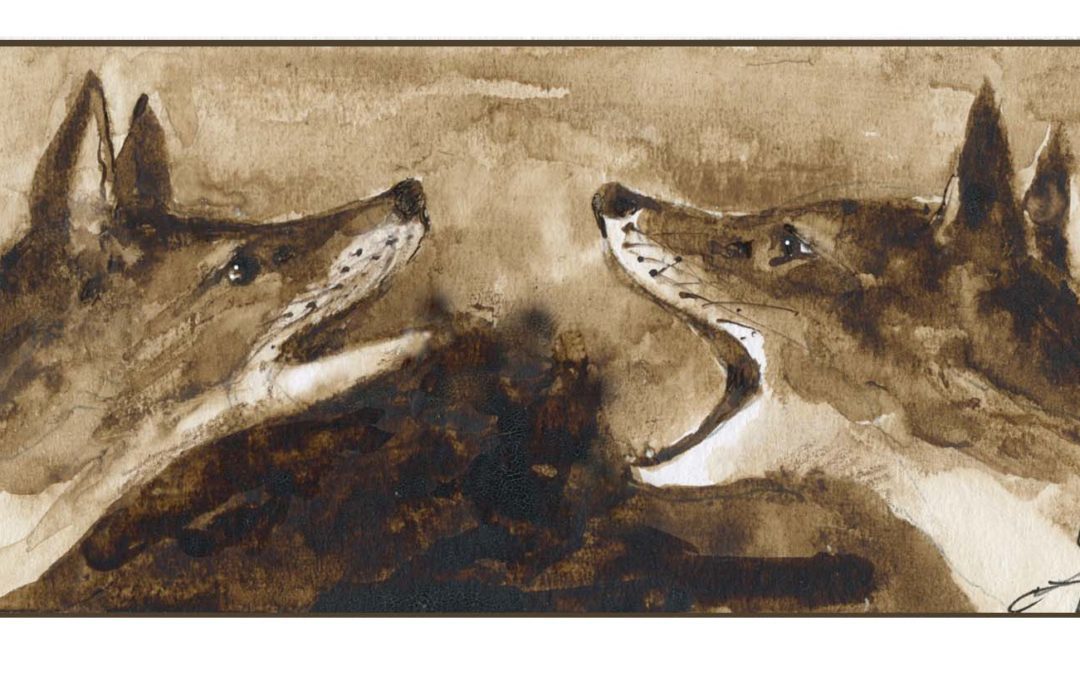 The Outside Story: Fox talk goes from yips to shrieks

Sometimes it pays to be an insomniac. One frigid winter night, I climbed out of my restless bed and slipped outside to stand under a sky littered with stars and take in the complete silence of darkness. Suddenly, a ruckus broke out along the edge of the pond near my home. A series of high-pitched yips echoed from the shore. A wild yapping answered from closer to my own yard.
I had seen their tracks the last few weeks, traversing the meadow, crossing onto the frozen pond and up along the trail into the forest. I had smelled their skunk-ish markings along the high hummocks of the path and found their slender, twisted scats on top of the stone walls and raised rocks in the meadow. That late winter night, as I stood and listened in the dark, the red foxes (Vulpes vulpes) reminded me I am not the only one who claims this little hillside as home.
A few years back, a viral Norwegian music video had many people asking, “What does the fox say?” It seems the fox has a lot to say, and speaks with a variety of different calls, as well as through quieter forms of communication. Researchers have documented over 20 different red fox vocalizations, from barks and whines to shrieks and screams. Even fox kits have distinctive calls, including murmurs and warbles.
Most members of the Canidae family use vocalizations as a form of communication. Think of the eastern coyote’s repertoire, with its serenading howls echoing through our New England landscape. Canids are social, but they do spend significant amounts of time alone. A howl, yip, or bark into the night is a message that travels over long distances, through the darkest and foggiest nights, across thick vegetation and dense marshes.
For a red fox, which weighs only between 8 and 15 pounds, a revealing high yip can be risky, drawing predators’ attention to its location. Perhaps for this reason, red foxes are quieter than eastern coyotes. They spend much more time communicating in quiet ways: through urine and scat.
Throughout the winter, I regularly find fox urine markings. Most often these scent posts are placed on high spots along woodland trails and in fields. The scent is potent, musky like a skunk, especially during breeding season in the late part of winter and early spring. Foxes can make up to 70 urine markings per hour when foraging, denoting the boundaries of their territories, as well as indicating where stored food remains and which caches have been eaten.
In late winter and early spring courtship and mating season, red fox vocalizations increase. During this time, male foxes travel out of their home ranges in search of receptive females. This means they must cross boundaries, encroaching on territories that are not their own. When foxes encounter one another in this period, their calls are often explosive, high-pitched, and abrupt with short, staccato-like barks. Researchers describe these types of calls as territorial warning sounds — a bit like our own home alarm systems.
Once foxes pair up for mating, the bonded pairs communicate using other types of calls. These are more complex, longer in duration, and more variable in pitch than the yell-barks and shrieks of defensive foxes. Researchers believe these calls communicate location and identity. After the kits are born in spring they, too, begin to communicate. Newborns murmur and warble, adding growls, whines and yips to their repertoire as they grow.
Late one night, during my most recent nocturnal wanderings, I caught a glimpse of two foxes in the moonlight trotting through the snowy meadow. Bushy tails straight out behind them, they moved swiftly. One fox in the footsteps of the other, like a shadow to each movement. I wanted to yip out a greeting to my neighbors, a friendly bark, but since I’m just learning fox, I decided to only watch this time.
Susie Spikol is Community Program Director for the Harris Center for Conservation Education in Hancock, N.H. The illustration for this column was drawn by Adelaide Tyrol. The Outside Story is assigned and edited by Northern Woodlands magazine and sponsored by the Wellborn Ecology Fund of New Hampshire Charitable Foundation: wellborn@nhcf.org.

Share this story:
This article’s tags:
Susie Spikol, The Outside Story, fox