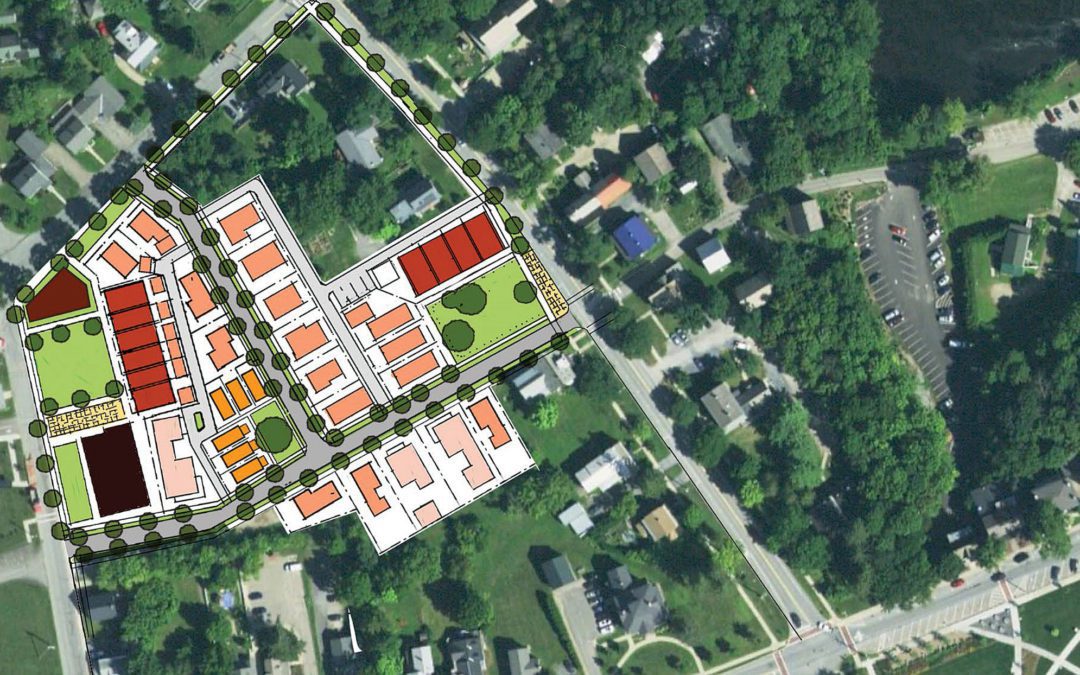 THE TOWN OF Middlebury recently concluded a five-day “Planapalooza” to create its first-ever downtown master plan, which will include ideas on how development could responsibly occur in a downtown that is already substantially built out. Seen here is the notion of a “pocket neighborhood” surrounding St. Mary’s School off Shannon Street.
By John Flowers

MIDDLEBURY — A “pocket neighborhood” surrounding the former St. Mary’s School off Shannon Street and a reimagined economic development initiative off Bakery Lane are just two concepts for the future of downtown Middlebury as brainstormed by participants at a flurry of recent planning sessions.
Middlebury officials and a town-hired consultant will spend the coming months processing a variety of comments and concepts offered by dozens of residents during a five-day “Planapalooza,” a series of events aimed at shaping the community’s first-ever downtown master plan. A draft of that plan — which will shape the shire town’s village for the next 20 years — is expected to be ready by next April, according to Jennifer Murray, Middlebury’s director of planning and zoning.
The final plan, due next summer, will provide townspeople — and builders — more clarity on development scenarios that would be harmonious with the downtown. Consultants with Town Planning & Urban Design Collaborative LLC (TPUDC) will also suggest funding sources for improvements to public property in the core village.
The last Planapalooza session on Nov. 22 drew 40-50 people, according to Murray.
“A lot of them were people who had followed us through the process,” she said “That’s the perfect scenario; someone who starts with you the first night and saw how things developed over the course of the Planapalooza.”
The event included focus groups on the downtown economy that featured members of the local arts, retail, hospitality, office and education communities. There were also sessions for the general public. TPUDC consultants took notes, made suggestions and created graphics of what the various ideas might look like if implemented.

BEHIND THE LIBRARY
Among those at the planning table were principals of NexBridge Partners LLC, which four years ago proposed a plan for  developing an “economic development initiative” for a 1.42-acre, town-owned parcel off Bakery Lane, behind the Ilsley Public Library. The NexBridge plan originally showed a single, vertical L-shaped, mixed-use building with a parking garage.
A new conceptual sketch of the Bakery Lane area shows a more fragmented building plan, still centered by a parking garage.
Feedback during Planapalooza also produced new infill opportunities for Riverfront park in the Marble Works, Park Street and Washington Street.
“Infill” is a planning term that denotes additions of small buildings in areas that are already substantially developed. Murray explained that unlike other communities, the vast majority of space in downtown Middlebury is already spoken for.
“Bennington is different than us; they have entire blocks to spare,” Murray noted. “They have huge brownfield sites where they can literally knock things down and start again. We don’t have a lot of neighborhoods in decline. We don’t have entire blocks we can spare. So the name of the game for us is infill development.”
The plan will include lots of new data, thanks to the efforts of Middlebury College students who participated in the process.
Middlebury successfully applied for a combined total of $108,333 in grants to do its master planning. Around $75,000 of that amount came from Vermont’s Better Connections Grant Program, while an additional $33,333 came through the state’s Clean Water Initiative Fund. That clean water money is being used to begin the design for environmentally sensitive stormwater upgrades in the downtown.
Murray said there’s still time to influence the downtown master planning process. Comments should be emailed to JMurray@ TownOfMiddlebury.org. Also, the planning commission has provided a template for people to follow in holding their own visioning session for the downtown master plan. That template can be found online here.
“We really want to make sure it’s the ‘people’s plan,’ so that’s why the Planapalooza process was so intensive — to try o get all manner of input from people in a lot of different ways,” Murray said. “I want to make sure all voices are heard and sides are heard.”
Reporter John Flowers is at johnf@addisonindependent.com.