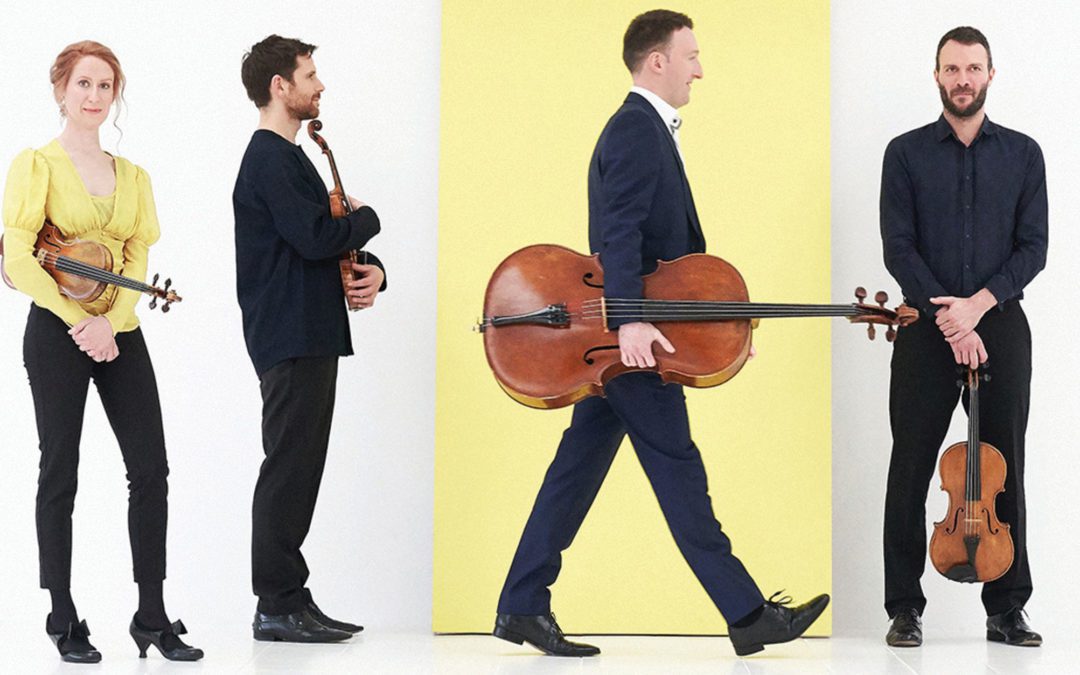 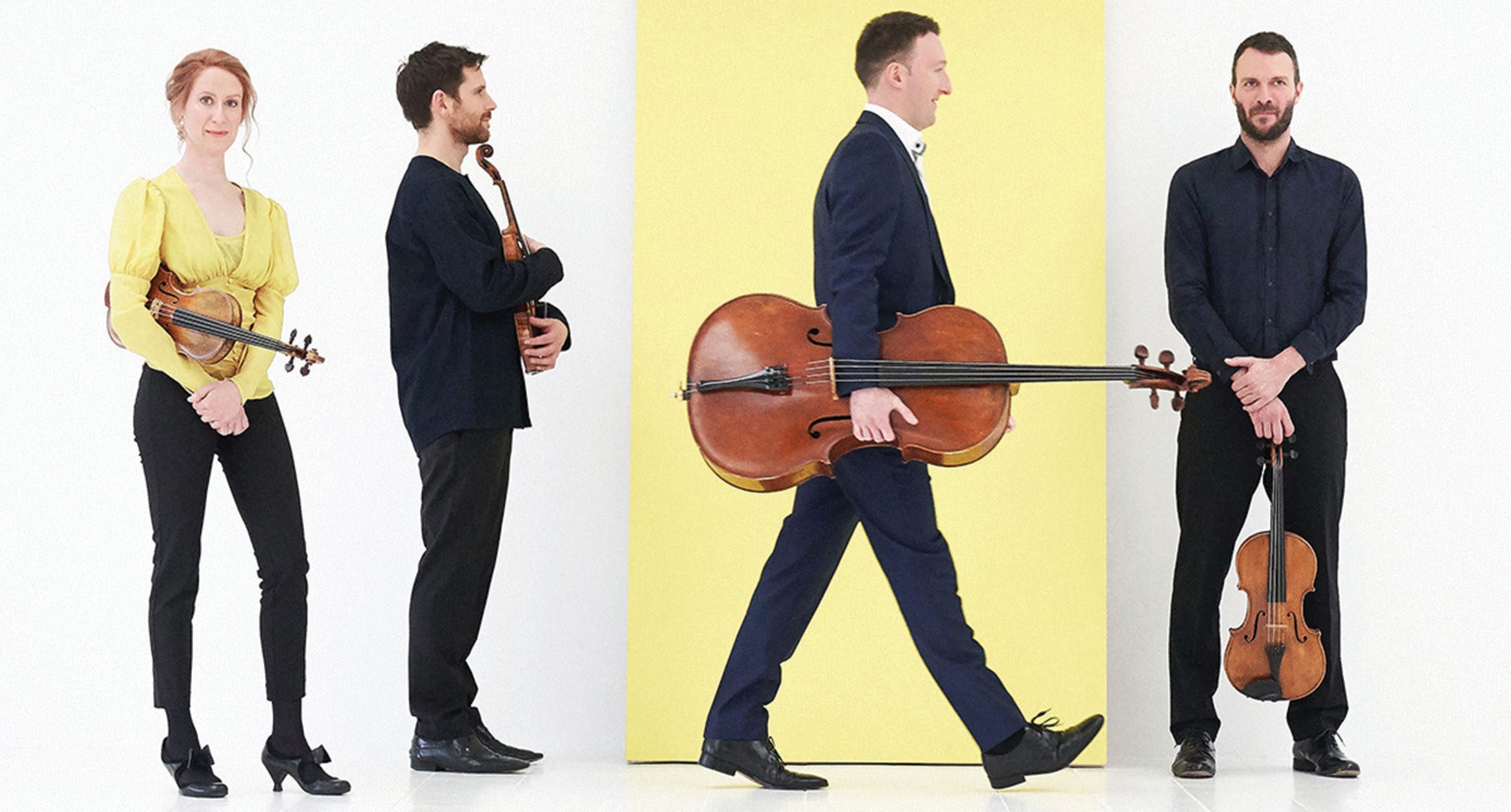 THE HEATH QUARTET begins their residency at Middlebury College and their celebration of Beethoven’s 250th birthday with a concert on Saturday, Oct. 5, at 7:30 p.m., in Robison Hall, at the college’s Mahaney Arts Center. A second concert is scheduled for Oct. 11.
By Greg Pahl

The acclaimed Heath Quartet returns to Middlebury College on Saturday, Oct. 5, and Friday, Oct. 11, to help celebrate Beethoven’s 250th birth year. The ensemble will present Beethoven’s entire string quartet cycle over six concerts this season, bookending three weeklong residencies with the campus and community.
The Oct. 5 concert that will launch the cycle will take place at 7:30 p.m., in Robison Hall at the college’s Mahaney Arts Center. The program will include Quartet No. 1 in F Major, op. 18.1; the “Serioso” quartet, op. 95; and Quartet No. 13 in B-flat Major, op. 130. Professor of Music Larry Hamberlin will offer an informative pre-concert lecture at 6:15 p.m.
The Oct. 11 concert will feature Quartet No. 2 in G Major, op. 18.2; the second “Razumovsky” quartet, op. 59.2; and Quartet No. 15 in A Minor, op. 132. The other four concerts in the cycle will follow on January 11 and 17, and May 2 and 8, 2020.
One of the most exciting British chamber ensembles of the moment, the Heath Quartet — including violinists Oliver Heath and Sara Wolstenholme, violist Gary Pomeroy, and cellist Christopher Murray — is steadily building a reputation for their upbeat and integrated sound. In May 2013, they became the first ensemble in 15 years to win the prestigious Royal Philharmonic Society’s Young Artists Award. In 2016 their recording of Sir Michael Tippett’s string quartets (Wigmore Live) received widespread acclaim and won the Gramophone Chamber Disk of the Year.
Reserved seating tickets are $22 for the general public; $16 for Middlebury College faculty, staff, alumni, and emeriti; $10 for youth; and $6 for Middlebury College students, and are on sale at 802-443-6433 or middlebury.edu/arts/tickets. The Mahaney Arts Center is located at 72 Porter Field Road in Middlebury, just off Route 30 South/S. Main Street. Free parking is available curbside on Route 30 or in the MAC parking lot.

KYLE CAREY PERFORMS “GAELIC AMERICANA” AT BRANDON MUSIC
Brandon Music welcomes celebrated singer-songwriter Kyle Carey on Friday, Oct. 4, at 7:30 p.m. This is the first time Carey has taken the stage at Brandon Music.
Carey’s music is unique. Her novel sound is an unusual trans-Atlantic fusion that includes influences of the American Folk Anthology, the traditional music of Cape Breton, Ireland and Scotland and the Appalachian poetry of Louise McNeill. Carey has a soft but sandy voice and is a most impressive storyteller, musician and songwriter.
Born in New Hampshire and now based in Brooklyn, N.Y., until the age of seven Carey lived in the Alaskan bush, where she learned the Yup’ik language and its songs. She studied literature in college, and then travelled to Cape Breton Island, Nova Scotia on a Fulbright Scholarship to begin her study of the Gaelic language and its music.
She has been touring nationally and internationally for the past seven years retelling the history of American folk on both sides of the Atlantic and performing her unique style of American folk.
To date Carey has released three albums — “Monongah,” “North Star,” and “The Art of Forgetting” — all critically acclaimed, and all a direct and compelling expression of her distinctive “Gaelic Americana” sound. Don’t miss this great opportunity to hear one of the most celebrated performers live.
Concert tickets are $20. A pre-concert dinner is available for $25. Reservations are required for dinner and recommended for the show. Venue is BYOB. Call 802-247-4295 or e-mail info@brandon-music.net for reservations or for more information. Brandon Music is located at 62 Country Club Road in Brandon.

KOLONIEN AT THE RIPTON COMMUNITY COFFEE HOUSE
The Ripton Community Coffee House welcomes Swedish band Kolonien to the Ripton Community House on Saturday, Oct. 5, at 7:30 p.m.
The four members of the band grew up in the traditional Swedish music scene, deeply embedded in the family. As Kolonien, they reinvent their roots, both instrumentally and vocally with their rich harmonies.
Their journey started in their teens, when they left their countryside home to travel around Sweden as protest singers in the Swedish Green Movement. When they got invited to perform at a festival in Tanzania in 2010, things really started taking shape. It was meant as a onetime gig, but the songs and the conversations of change fell in place unexpectedly well, and they decided to start a band and write their own songs.
Since then, these four Swedes have been pursuing their music fueled by the vision of a united world, taking them on multiple tours in Europe and beyond. With just shy of 400 concerts, numerous workshops, and collaborations, they have constantly been seeking new ways and new connections.
Kolonien has released two albums, which have received Swedish folk and world music awards. Their music has been called, “The most uplifting protest music ever heard.”
Admission: $15 generous admission; $10 general admission; $3 for children. The doors for this concert open at 7 p.m.  Refreshments are available. Call ahead for a slot on the open mic list. For more information phone 802-388-9782.

DEBUT PERFORMANCE BY THE UMOYA TRIO AT BRANDON MUSIC
Brandon Music takes pride in showcasing and supporting new talent. On Saturday, Oct. 5, Brandon Music welcomes The Umoya Trio for their debut performance of classical recorder music at 7:30 p.m.
The Umoya Trio is the name of a group with an unlikely origin story: a multi-generational ensemble hailing from three different countries, connected by their love of recorder music and the gratification of experiencing the energy it brings with it. The word “Umoya” (Xhosa for “wind”) is a nod to the energy of the wind: of fierce siroccos, turbulent gales, swirling mistrals, and gentle cool breezes, and of course, the energy from their wind-powered instruments. This Boston-based group (Kaleem Ahmid, Chantal Holy and Anna Laufenberg) is equally adept with its Baroque and Renaissance repertoire as it is with its modern and (unusually for their instruments) classical-period works.
At their debut performance at Brandon Music, The Umoya Trio will share a selection of music spanning over 400 years, with intriguing pieces from the High Baroque (C. P. E. Bach), Classical (Beethoven), and Modern periods (S. Sieg) — an intriguing program to demonstrate and explore the storied history and versatility of the recorder.
Concert tickets are $20. A pre-concert dinner is available for $25. Reservations are required for dinner and recommended for the show. Venue is BYOB. Call 802-247-4295 or e-mail info@brandon-music.net for reservations or for more information. Brandon Music is located at 62 Country Club Road in Brandon.

MUSIC SERIES AT OCB
As part of the 2019 Music Series at Otter Creek Brewing, independent artist Madeleine will be performing at 5 p.m. on Friday, Oct. 4, in OCB’s pub space.
Madeleine is a singer-songwriter based out of Nashville, Tenn. The Connecticut native balances writing and recording with a fairly aggressive tour schedule. Her debut LP, “Postcards,” was released in May 2016. It was recorded in a small home studio where she had a hand in writing, playing, producing and engineering the album.
Madeleine’s sophomore album, “Matter of If,” was released in Nov. 2018. She received the 2018 ASCAP Foundation Leon Brettler Award for ‘“Carpet,” the opening track on the album.
OCB is located at 793 Exchange Street in Middlebury. For more information, call 802-388-0727.

INTERNATIONAL FILM SERIES
The 2019-2020 Hirschfield International Film Series continues on Saturday, Oct. 5, at Middlebury College with the 2018 France/Morocco film “Tazzeka,” directed by Jean-Philippe Gaud.
Growing up in the Moroccan village of Tazzeka, Elias learned the secrets of traditional Moroccan cuisine from his grandmother, who raised him. Years later, meeting a top Paris chef and a young woman named Salma inspires him to leave home. In Paris, Elias faces unstable work and financial hardship as an undocumented immigrant. But he also finds friendship with Souleymane, who helps revive his passion for cooking.
The film, in French with English subtitles, will be shown at 3 and again at 8 p.m. in Dana Auditorium on College Street (Route 125). It’s free. Some of the films in this series may be inappropriate for children.