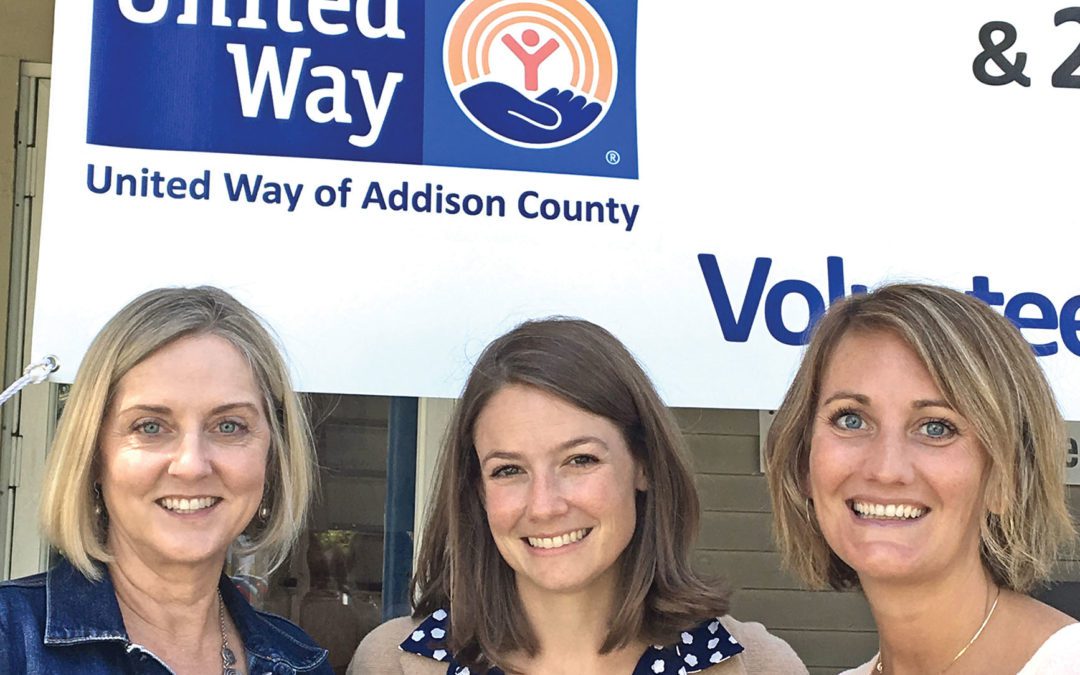 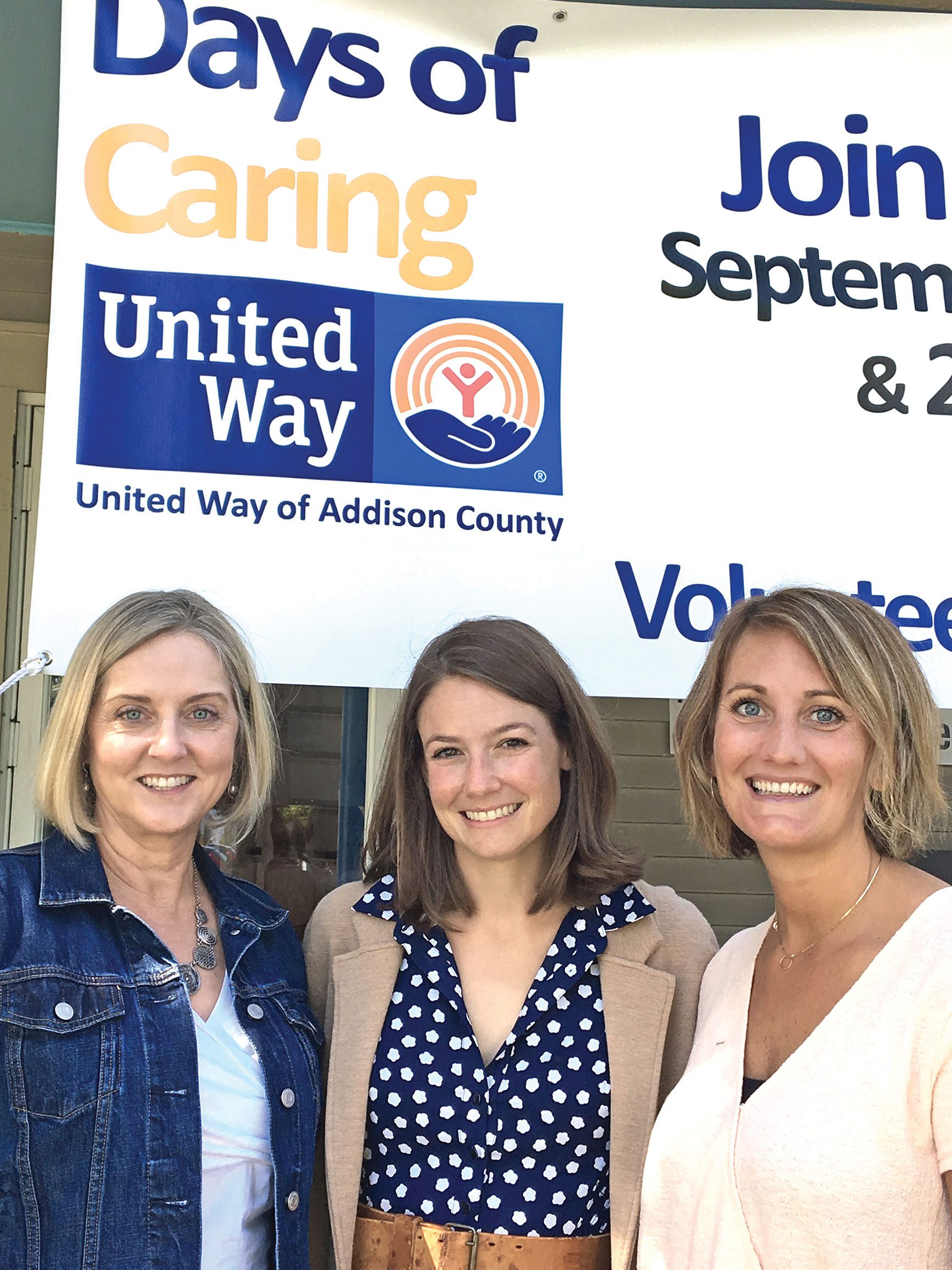 THE UNITED WAY of Addison County on Sept. 19 will formally launch a $635,000 fund drive for 2019. Leading that effort will be, from left, UWAC Marketing & Development Director Amy Bodette Barr, 2019 campaign chairperson (and United Way board Vice Chair) Abby Blum, and Helena Van Voorst, the organization’s executive director.
By John Flowers

Our desire here at United Way is that our emerging leaders will someday have an assessment of what’s going on in the county and get passionate around making change around one of those issues.
— Helena Van Voorst, United Way

MIDDLEBURY — United Way of Addison County (UWAC) next week will officially launch its 2019 fund drive with a $635,000 goal and new optimism, fueled in part by the organization’s outreach to a new generation of prospective donors.
This year’s $635,000 goal is $25,000 less than last year’s target of $660,000. An eleventh-hour surge in donations — spurred by three separate pledges to match dollar-for-dollar donations up to an amount of $10,000 — allowed the United Way to leverage an additional $31,000 before closing the books on the 2018 campaign last spring with a grand total of $615,000. The pledge challenges were pitched by an anonymous donor, Co-operative Insurance Companies, and the UWAC board.
Helena Van Voorst, executive director of UWAC, said she and her colleagues are hoping to avoid the need for last-minute pledges to round out the 2019 campaign. They’ve put careful thought into this year’s goal and will now focus on convincing prospective donors that their contributions are a wise investment in the Addison County nonprofits that provide food, shelter, clothing, counseling, child care and other vital services to local folks in need.
“We arrived at this year’s goal by looking at the actual results of our most recent campaigns, and thinking about where we’re anticipating some growth,” Van Voorst said. “This goal reflects something closer to what we achieved last year, with some anticipated growth among every group of donors — and especially among our ‘leadership’ donors.”
United Way staff and volunteers will symbolically kick off this year’s campaign at its “Days of Caring” event on Thursday, Sept. 19, and Saturday, Sept. 21. A combined total of 366 volunteers are scheduled to fan out to all corners of the county on those two days to donate much-needed labor on behalf of the 30 partner nonprofits that receive annual financial support from UWAC. Volunteers will range from Mary Hogan Elementary School students to retirees. They’ll perform such good deeds as painting affordable housing and removing cattails from the small pond at Elderly Services Inc.
While UWAC now has a full roster of helpers, any nonprofit with a project in need of helping hands should call the United Way at 388-7189 to ask for assistance.
Van Voorst, UWAC Director of Development & Marketing Amy Bodette Barr, and 2019 campaign Chairperson (and board Vice President) Abby Blum have set a goal of increasing the number of donors and revenue from each category of giving offered through the United Way. Those categories include:
• Payroll deduction plan. Employees from approximately 40 participating Addison County businesses contribute to UWAC through this manner.
• Individual contributions at any level. The organization has created three special levels of giving that include Leadership Society ($1,000 to $1,249), Robert Frost Society ($1,250 to $9,999), and the Alexis de Tocqueville Society ($10,000 to $24,999). Last year, UWAC received 109 donations at the Robert Frost level, seven at the de Tocqueville level, another 136 gifts of more than $500 and 469 contributions of less than $500.
And United Way leaders this year are debuting two new ways to contribute: The “Addison County 365 Small Business Circle,” and the “Emerging Leaders of Addison County” group.
The Business Circle will provide “busy entrepreneurs, business owners, and managers an opportunity to sponsor a lot of important, high-visibility events, and make a significant impact on the lives of people in your community — with just one gift,” reads a program description on UWAC’s website.
“I think we hear from small businesses that they’re asked a lot by many people all year long, so we see this as an opportunity for them to make a gift that impacts the whole community,” Barr said.
Suggested donation levels in the Business Circle category range from $365 to $1,460 per year. Barr noted this yearly donation option could be particularly attractive to small businesses that haven’t been receptive to the payroll deduction program. Participating businesses qualify for such perks as recognition in UWAC’s annual report, on Days of Caring T-shirts, and through United Way social media.
“We’re hoping it’s a really accessible way for small businesses to have an impact and also get some visibility in return,” Van Voorst said.
UWAC is partnering with the Addison County Chamber of Commerce to organize the “Emerging Leaders” group. The concept is simple — offer young people (loosely defined as age 40 and younger) opportunities to network at regular “lunch and learn” and “off the clock” social/educational events to get more knowledge about Addison County issues and then rally around community building activities.
For their part, the UWAC and chamber will help organize and empower a new generation of local business leaders who could become part of the next wave of United Way campaign donors.
Officials are proposing a one-time membership fee of $180 for the Emerging Leaders group.
“Yes, it is a giving group of the United Way, but the idea is they will connect with one-another… and will also get an education piece, so they can hear what the challenges are in Addison County,” Van Voorst said. “Our desire here at United Way is that our emerging leaders will someday have an assessment of what’s going on in the county and get passionate around making change around one of those issues.”
Barr plans to communicate early and often with current and prospective donors, letting them know how their gift can make an impact. She’s doing that in part by sharing stories about neighbors whose lives have been made better through donors’ generosity.
Barr also wants to be attentive to how contributors want to see their philanthropic dollars deployed. She’ll glean those insights from United Way surveys and direct outreach to donors.
“We support many different nonprofits with different missions,” she said. “We realize they’re all important, but we recognize some donors, for one reason or another, might be particularly passionate about one type of cause. I want to find out what they care most about and communicate with them based on what their passions and their interests are.”

MONTHLY E-NEWSLETTER
The United Way will amplify its message later this month with the release of a new e-newsletter. That monthly correspondence will keep donors up to speed with UWAC’s accomplishments and plans.
United Way leaders also want people to check out the organization’s new website at unitedwayaddisoncounty.org. If they do, they’ll find the customary background on fundraising activities and programs, but also video profiles of recipients — and providers — of UWAC support. It’s a tangible way for donors to see how their dollars have improved the lives of people in need.
Blum has a professional history with nonprofits and fundraising, and has thus become a very valuable member of the UWAC team. She recently capped a seven-year stint with Middlebury College’s Office of Advancement. She just started her new role as the associate director of development for the Nature Conservancy’s Adirondacks chapter.
Blum believes the United Way is well positioned to become a charity of choice for young donors.
Why? Because it works as a team with the many nonprofits it supports.
“One thing I value in my philanthropy is overlap and cooperation,” she explained. “No single organization can do anything alone. That’s why the United Way is an appealing organization to give to if you care about collaboration and shared resources, and how to approach problems collectively going forward. Even though the landscape of philanthropy is changing, the mission of the United Way I think is appealing to the younger generation.”
Reporter John Flowers is at johnf@addisonindependent.com.