Pet of the week: Dandelion 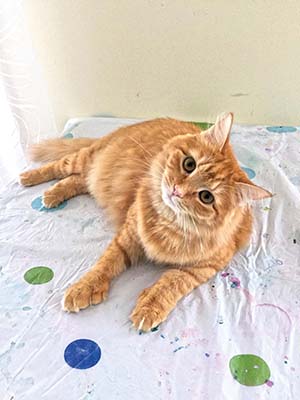 Pet of the week: Dandelion

Meet Dandelion! Dandelion and her twin brother, Claude, were adopted from Homeward Bound by Meg and Daisy Madden and Dan Sullivan in January 2018. A year old now, she is just as kitten-like as the day she found her forever home. She has the tiniest little kitty face, itty bitty pink nose, and a long coat as soft and fluffy as clouds-she’s soooo cute!
Dandelion is a bit of a genetic rarity-generally, orange tiger cats tend to be male, but Dandelion is as ginger as they come.
Dandelion is a real foodie! She gets so excited when she thinks she is about to get wet food that she meows non-stop and runs crazy circles around the kitchen as soon as she hears the can open.
Dandelion loves to be picked up for a snuggle and a rub on her silky soft kitty tum. Despite the extra claws, she is always very gentle.
Dandelion’s human, Meg, often says that if she can be reincarnated, she wants to come back as a kitty in a loving and happy home-just like Dandelion!
Meg & Daisy Madden and Dan Sullivan, Middlebury

Share this story:
This article’s tags:
Pet of the Week