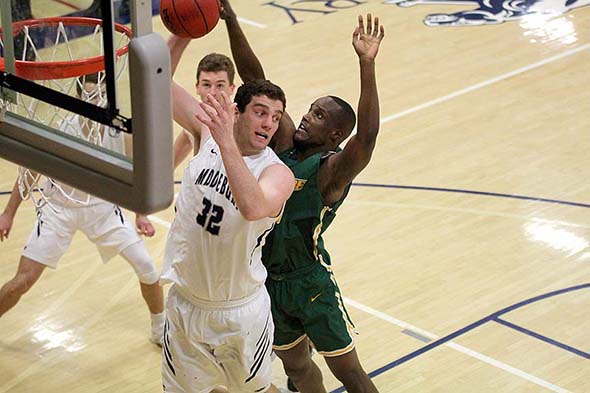 MIDDLEBURY CENTER ERIC McCord hauls down one of his 16 rebounds against Skidmore on Saturday. He was also top scorer for the Panthers with 18 points in the 71-54 win. Photo by Steve James

MIDDLEBURY — After giving up more than 90 points in back-to-back losses and being outrebounded at Plattsburgh on Tuesday, the Middlebury College men’s basketball team restored order vs. visiting Skidmore on Saturday.
While snapping that brief two-game skid with a 71-54 victory, the Panthers held the 4-3 Thoroughbreds to 32 percent shooting and outrebounded them, 48-44.
With Tuesday’s loss at No. 10 Plattsburgh, the Panthers stand at 6-2 heading into two road games on Dec. 17 and 18. And they probably will drop from last week’s No. 18 ranking in NCAA Division III.
But more importantly, according to senior forward Eric McCord, who dominated in the paint with 18 points and 16 rebounds, and Coach Jeff Brown the Panthers on Saturday took care of business on the defensive end and on the boards.
“I think it was huge,” McCord said. “All five guys on the court, and we played like 10 deep today, did a tremendous job really hunkering down and playing some defense and rebounding. So it was a great effort all around.”
Brown said those elements are critical for the Panthers to perform the best, especially given their preferred transition game thrives on turnovers and quick outlet passes after defensive rebounds.
“When we’re playing well we’re really rebounding the basketball at a high level. And for a couple games we actually got beat on the boards, and today with Eric and Matt (Folger) and some of the other guys, we just did a tremendous job of rebounding. It gets us out and gets us some easy shots on offense,” Brown said. “And I also thought we played very good defense. They have several talented players one-on-one, and it’s a challenge to guard them.”
McCord also acknowledged the victory would help the team’s frame of mind.
“It’s a long season, and you’ve just got to stay positive, just come in each day and do the work, do the little things right. It was definitely good to get this one under our belt, though,” McCord said. “We needed this one.”
Those talented Skidmore players to whom Brown referred are guards Noah Meren and Edvinas Rupkus, who came in averaging about 27 and 16 points per game, respectively. The Panthers held Meren to 20 on nine-for-23 from the floor and Rupkus to 12 on three for 10.
The Panthers also got a boost from the bench after a slow start. Skidmore went on top, 11-10, at 13:20 of the first half on a Meren jumper, but with several subs on the floor the Panthers outscored them by 12-0 over the next five minutes to take the lead for good.
Three reserve guards triggered the run on the offensive end: Joey Leighton scored in the lane, Max Bosco converted in transition, and Perry DeLorenzo canned a three-pointer (and took a charge at the other end). Starters McCord and Griffin Kornaker joined them on the floor, and McCord scored twice inside on feeds from Leighton and Bosco before Kornaker capped the surge with a conventional three-point play at 9:28 that made it 22-11.
A few minutes later a Meren jumper followed by two Greg Skoric free throws at 4:14 cut the Panther lead to 26-19, but the Panthers closed the half with a 17-7 run to lead by 17 at the break, 43-26. Bosco sank nine of those points, including a three-pointer and a jumper with seconds left in the half, while Folger hit a sensational fast-break layup in traffic, drilled a corner three, and grabbed an offensive board and fed Kornaker for a three-pointer.
Thoroughbred Skoric converted a putback to open the second half, but the Panthers answered with a 10-0 run to take a 53-28 lead at 16:10 and pretty well settle matters. Folger sank a three, McCord converted one of his several reverse layups in the post, Jack Farrell converted a three-point play after grabbing an offensive board, and McCord capped the run with a putback.
Meren at one point sparked a 15-0 Skidmore surge that cut the Panther lead to 12 at 58-46 at 10:20, but Folger answered with a three, and the Middlebury defense held the Thoroughbreds to eight points over the final 10-plus minutes.
Folger finished with 14 points and nine rebounds, and Bosco chipped in 11 points off the bench. Farrell didn’t shoot well, scoring just five, but chipped in nine rebounds and five assists from the point guard spot. Kornaker added nine points, and freshman forward Alex Sobel contributed five rebounds and three blocked shots off the bench.
Brown said the contributions from the bench exceeded the numbers.
“In the first half it was a big-time lift. Things didn’t slow down once they got in, and many of the guys off the bench got a couple buckets or a bucket in that stretch, and it was an important part,” he said.
Skoric scored 10 for Skidmore, while Meren’s seven boards led the team.
Both Brown and McCord are optimistic good things lie ahead for the Panthers.
“We have a lot of youth in our program, and a lot of guys who are in position to really step up and have a meaningful role,” Brown said. “We’re kind of learning, but I really like the potential of this group. I think it’s a group that’s going to get better up through February.”
McCord, one of only two seniors on the team, said effort will be needed to reach that potential.
“If we put in the work we’re talented enough to compete with anyone in the country,” he said. “We felt that way after those two losses. And I think we just have the mentality now and we just have a whole lot of work to do as a team to get better.”
Andy Kirkaldy may be reached at andyk@addisonindependent.com.